Party at the Quarterback: How Ravens' Don Martindale, Clemson's Brent Venables get after offenses

Clemson defensive coordinator Brent Venables and Baltimore Ravens defensive coordinator Don “Wink” Martindale are the two maddest scientists in football. Over the past couple of seasons, they have both blitzed their way to success, which has caused a trail of pain and suffering for opposing offenses. Venables ran the seventh-most blitzes in the FBS at his opponents in both 2018 and 2019, while Martindale has sent his troops into the fray more than any other NFL team during the same time frame.

The Ravens produced the seventh-most expected points added per play when blitzing and getting pressure over the past two years against straight dropbacks — including play action but not rollouts, screens or RPOs. Meanwhile, Clemson created the second-most pressures through blitzes over the past two seasons. On top of all that, both teams led their respective leagues in blitzes that resulted in an unblocked pressure or free rusher. Not only are they blitzing a ton, those blitzes are creating easy opportunities to get after the offense. Some 51% of Clemson's blitz pressures included a free rusher over the past two seasons. For the Ravens, it was 45%.

While both coordinators cook up an exorbitant number of blitzes, how vary in how they deliver their men freely to the quarterback. Venables insists on finding where the running back is located in protection and overloading him. Martindale loves occupying the offensive linemen away from where the running back is in protection and then slyly looping an accounted-for defender into the quarterback's lap.

In the current football meta of getting as many receivers out for a pass as fast as possible, pass protection generally lives in a “six-man” world. The five offensive linemen and the one running back are trusted with keeping the quarterback safe. Their responsibilities are usually split in half. Three offensive linemen — the tackle, guard and center to one side — are one unit. This is called the “slide” or “zone” side. The opposite side consists of the running back plus the other guard and other tackle. This is the “man” side. Against certain defensive fronts, the second guard can become part of the slide side. The offense ends up with either three protectors to either side or a four-two combination. This is called a “half slide” protection. 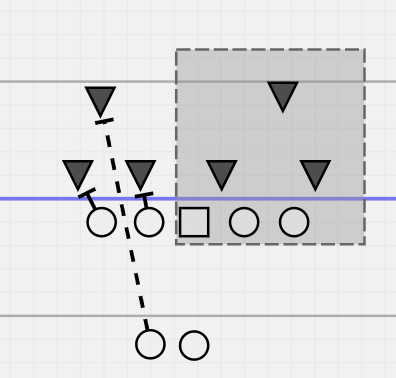 Somewhat less common but useful variations include “full slide” and “big on big” combos. Full slide puts the entire offensive line sliding to one direction while the running back and/or tight end pick up any defenders on the backside of the slide. 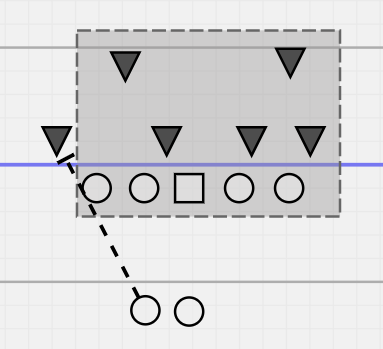 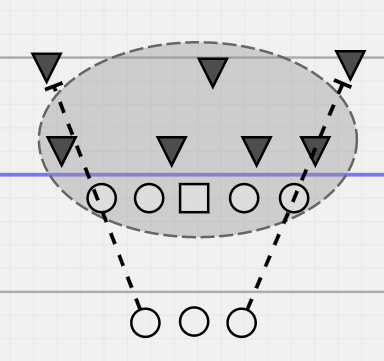 On paper, every blitz that sends an equal or less number of pass rushers than pass protectors can be dealt with. However, with the movement and blitz paths from these defenders, it’s not an easy task for offensive linemen to figure out who they are supposed to block.