We expected points out of this game between the Carolina Panthers and the Atlanta Falcons, but the offenses delivered only modest results. After dropping two games to start the season, Carolina’s win streak now sits at three after its 23-16 win in Week 5. On the other side, it’s hard to think Dan Quinn’s seat isn’t red-hot as the Falcons remain winless.

Editor's note: All of PFF's grades and advanced stats from this game will be finalized and made available to ELITE subscribers within 24 hours of the final whistle.

STORY OF THE GAME

The Falcons’ defense remains one of the worst units in the NFL. It came into the game allowing 7.6 yards per pass play — a mark that was better than that of only the Miami Dolphins. Teddy Bridgewater and a Panthers offense that has started to find its groove in recent weeks made sure that number didn’t get any better, averaging 8.1 yards per pass play in this contest. Bridgewater saw plenty of clean pockets, and he took full advantage against a pass defense that continues to reel.

Free-agent acquisition Robby Anderson recorded his third 100-yard receiving game of the season, and he narrowly missed a fourth such game last week, posting 99 receiving yards against the Cardinals. One of the more interesting aspects of Anderson’s early-season success has been his significant volume underneath in the passing game. His average depth of target of 9.3 yards in 2020 would be the lowest in a single season for his career by over 4 yards.

Not to be outshone, Carolina’s defense continued to outperform the narrative attached to them as one of the worst defenses in the NFL coming into the season. Second-year edge defender Brian Burns has been one of the bright spots on that side of the ball, racking up 15 pressures and earning a 79.9 pass-rushing grade coming into Week 5. His day was prematurely cut short due to an injury, but not before he recorded a strip-sack where he simply got off the line of scrimmage too quickly for the tight end trying to get across the formation to block him. It appears as if he’s on his way to taking a big step forward in Year 2. 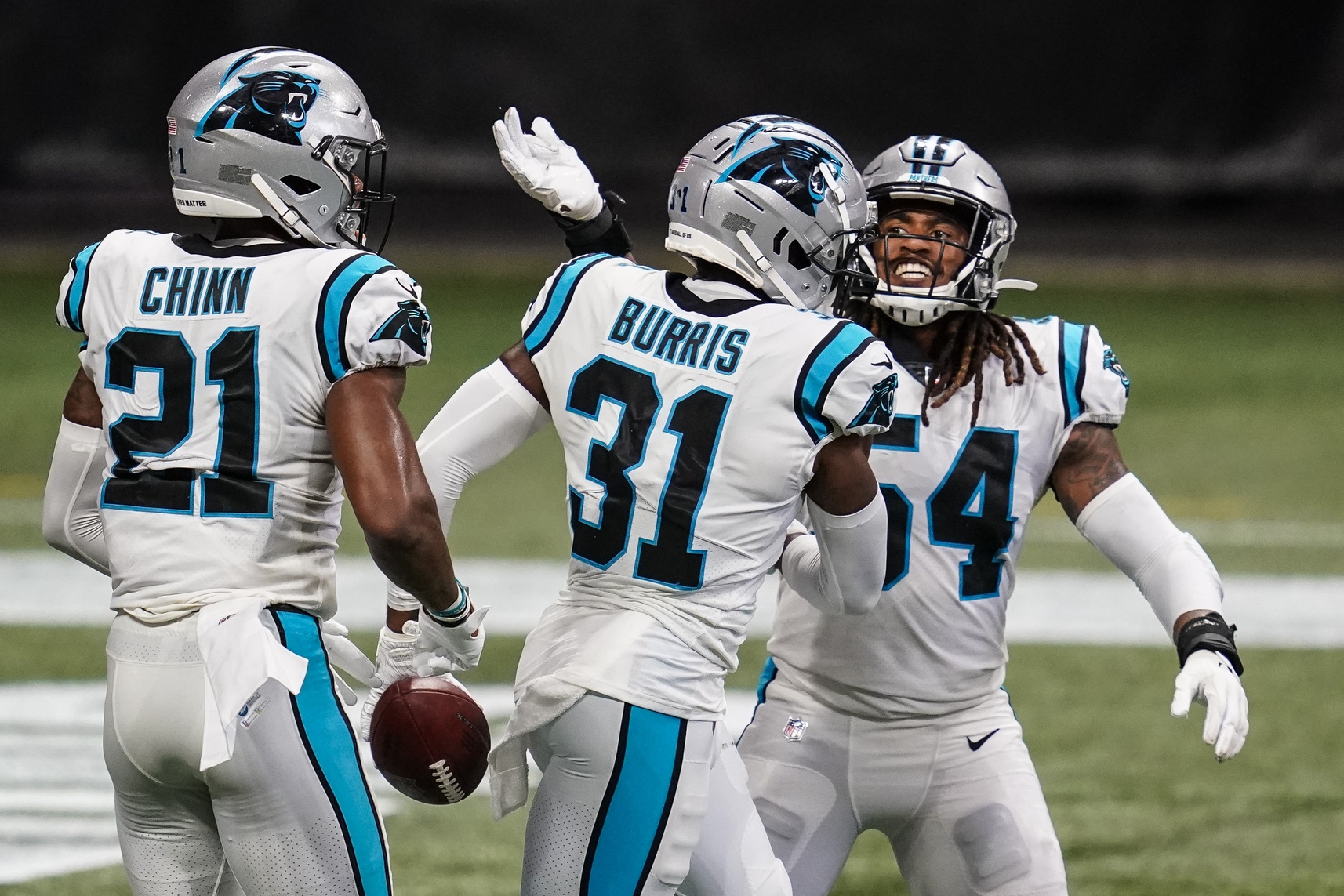 After several strong showings against the run in wins against the Los Angeles Chargers and Arizona Cardinals, Derrick Brown wasn’t nearly as impressive in a game where Atlanta averaged nearly 7 yards per run play. Fellow rookie defensive linemen Yetur Gross-Matos left the game with an ankle injury, but he was able to pick up multiple pressures beforehand. He’s had several solid showings as a pass rusher during the Panthers’ three-game win streak.

In the secondary, Troy Pride Jr. and Jeremy Chinn both had solid days in coverage — neither gave up much pass-game production to a Falcons’ offense that has a capable passing attack even without Julio Jones. On the other side, A.J. Terrell was the only Falcons cornerback to show up. Kendall Sheffield and Isaiah Oliver both were heavily targeted with success by Bridgewater, but Terrell did a good job of holding his own outside. On initial count, he allowed just 22 receiving yards into his coverage for the game. His return from the COVID-19 list injects some talent into this secondary. But as we saw today, it doesn’t solve all of Atlanta’s problems.

Rookie interior offensive linemen Matt Hennessy played only 12 snaps but managed to pick up a penalty and allow multiple pressures in his time on the field. He hasn’t looked fully comfortable at guard early in his NFL career after spending his final three seasons at Temple as the team’s starting center.