The 7 things we learned about fantasy football in Week 7

KANSAS CITY, MO - OCTOBER 02: Running back Kareem Hunt #27 of the Kansas City Chiefs rushes down field against the Washington Redskins during the second half on October 2, 2017 at Arrowhead Stadium in Kansas City, Missouri. (Photo by Peter G. Aiken/Getty Images)

What are some of the top things we learned for fantasy football in Week 7 of the 2018 NFL season? Fantasy football is an ever-changing game, and what we thought was a sure thing a few weeks among might not ring true anymore.

Below are seven things we learned from Week 7 of the 2018 fantasy football season. 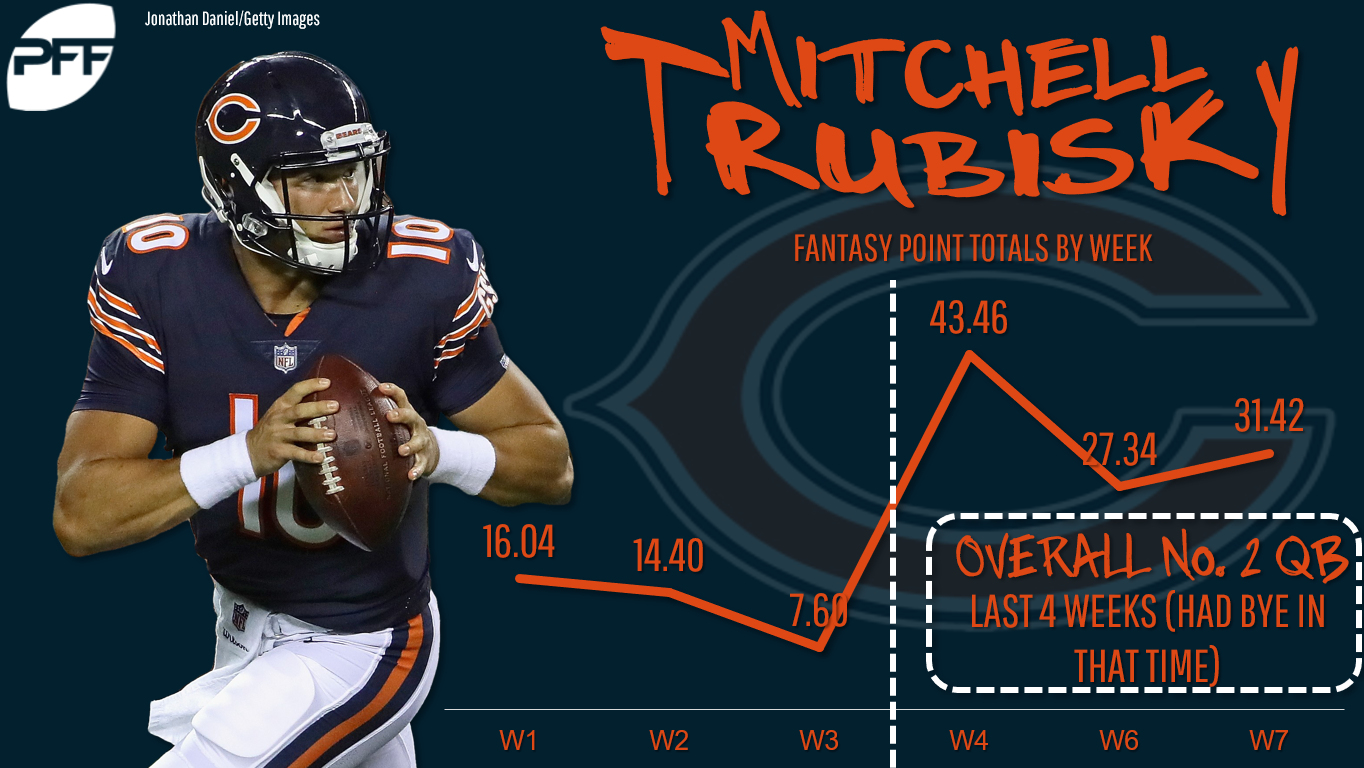 Trubiksy was the No. 2 overall quarterback on Sunday after throwing for 333 yards and two scores while adding 81 rushing yards and a touchdown on the ground as well. Over his last three games, Trubisky has scored 105 fantasy points (35 per game!). That’s more than Patrick Mahomes has scored … in his last four. Trubisky obviously won’t keep this absurd pace, but he should be viewed as an every-week starter now. Trubisky’s legs give him the fantasy floor you always look for in quarterbacks. His 245 rushing yards rank second this year among quarterback (Cam Newton had 257).

Hunt’s slow start to the season despite the fact his team was scoring 30-plus points every week made him an obvious candidate for positive touchdown regression. Over the last four weeks, Hunt is fantasy’s No. 2 running back behind Todd Gurley. He has six touchdowns to his name in that span while averaging 148 yards from scrimmage per game. Hunt roasted the Bengals for 141 yards and three scores in Week 7.

Johnson took 19 carries for 158 yards this week, giving him his biggest volume game (previous high was 16 carries) and highest yardage game (previous was 101). Johnson is now averaging 6.4 yards per carry, and despite claims from the coaching staff that they won’t make him a workhorse, his first 20-plus-touch game led to big results. LeGarrette Blount frustratingly stole a touchdown from Johnson, which does cap his ceiling, but Johnson should now be firmly in the flex discussion each week.

If you were early on Mack, congrats. After pacing the team with 12 attempts in his Week 6 return, Mack dialed it up another notch with 19 rushing attempts (out of a possible 30) and a position-high three targets. Mack went for 159 total yards and two touchdowns while showing that he is still the best running back in Indianapolis. His heavy workload the past two weeks shows that the Indy coaching staff knows it, too. The Colts won’t be playing the Derek Anderson-led Buffalo Bills every week, but Mack belongs in starting lineups each week given his role in this offense.

We probably won’t get Philadelphia’s backfield right all year

It’s a difficult pill to swallow, but the Philly backfield appears to be a full-on committee that isn’t going to change any time soon. Or, if it does change, it will become more of a three-man approach rather than a two-man approach. Wendell Smallwood had nine carries, Corey Clement had eight, and Josh Adams swallowed up four. Smallwood and Clement both saw two targets each. Over the past several games, we’ve seen Smallwood and Clement eat into each other’s work with no clear rhyme or reason, which makes it truly difficult to predict. We may not have a clear picture all year long.

Tyrell Williams is a legitimate flex option in standard leagues 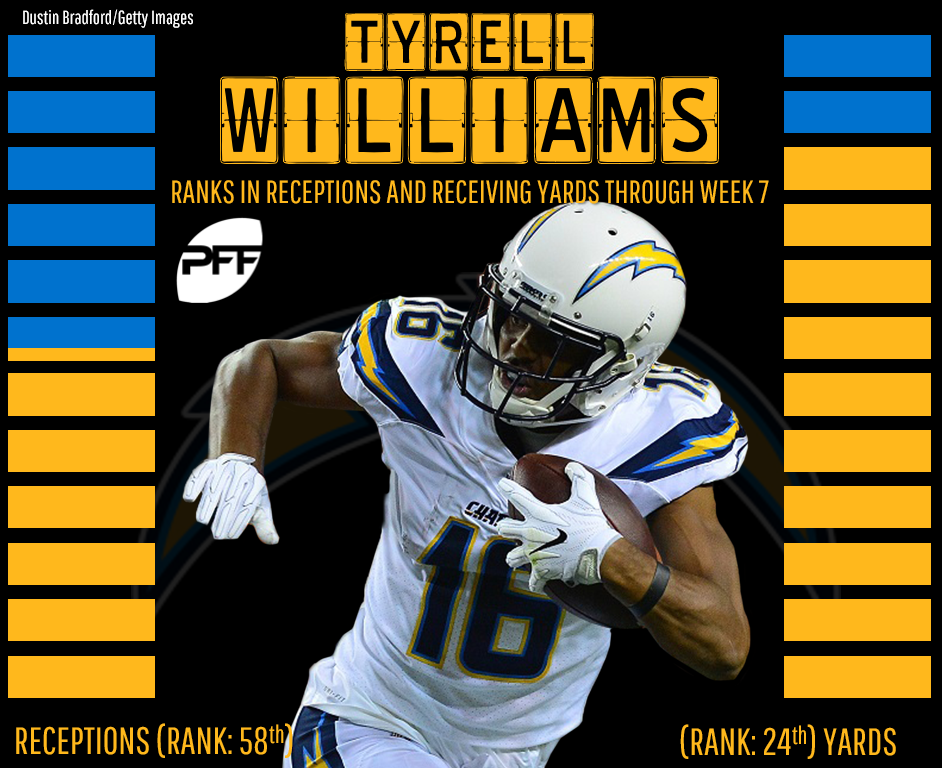 Williams dunked on the Titans defense with four catches (on four targets) for 118 yards and a score this week. Last week, he caught three balls for 118 yards and two scores. On the year, Williams has just 20 catches (58th among receivers) but 428 yards (24th). The deep ball between Philip Rivers and Williams is on point, and we should be considering Williams a viable — albeit volatile — standard league flex option.

Through Week 7 (with Monday still go to), Brown is the No. 15 receiver in PPR leagues and the No. 10 scorer in standard leagues. His 21.1-yard average depth of target is third-highest in the league among receivers who have seen at least 15 targets. His extremely high aDOT coupled with his relatively high team target market share (18% — which is great for a player with his aDOT) makes Brown a high-ceiling, high-floor play every week.