The added benefit of slot receivers in DFS in Week 1

Slot receivers are more important than ever in today’s pass-happy NFL, and as such carry extra importance in fantasy football. On a per-target basis, receivers lined up in the slot have outscored perimeter wide receivers in PPR scoring each of the last three seasons.

Accordingly, fantasy owners should be attacking defenses that surrender the most slot receiver targets. Opportunity is king and targets are the baseline factor driving wide receiver production. We can then drill down on more nuanced stats to identify players with advantageous matchups that will really provide an edge over our competition.

I used PFF data to uncover four slot receivers with juicy Week 1 matchups that fantasy owners should consider adding to their DFS lineups.

Last season, Lockett ran 51% of routes from the slot where he had an 89.7% catch rate (first among all slot receivers), five touchdowns (third), and a perfect 158.3 passer rating.

The new alpha of the Seahawks receiving corps has a tasty matchup against a Cincinnati secondary that was repeatedly torched by slot receivers last season: 181 targets (fifth-most among all NFL defenses), 134 receptions (fourth), 74% completion percentage (fourth), and 35 explosive plays of 15-plus yards (seventh). While the Bengals only allowed three slot receiving touchdowns last year, this number is likely to regress upward in 2019.

The idea of Lockett being a sharp Week 1 play appears to be gaining steam among the fantasy football community. Even with elevated ownership (our projected DFS ownership has him above 15% on both main sites), he is still worth plugging into lineups.

The Bucs secondary has been tormented by slot receivers for several years running — no NFL defense has allowed more slot receiving yards than the Bucs since 2016. The full picture from last season alone is even worse: 199 targets (third most), 155 receptions (most), 77.9% completion percentage (second), 1,875 yards (most), 15 touchdowns (most), 41 explosive plays of 15-plus yards (second), 122.7 passer rating (third), and 432.5 total PPR fantasy points (most).

Bucs slot cornerback M.J. Stewart was the culprit for much of this production. He was targeted every 4.3 slot cover snaps (most among all cornerbacks) and allowed a staggering 2.38 yards per slot cover snap (most) with a 145.6 passer rating and 84% catch rate.

Pettis will likely moonlight in the slot, with a reasonable expectation of about 30-40% of his routes — which would be more than enough to rack up fantasy production against the Bucs. There is even the possibility that Pettis spends an even higher snap share in the slot as the 49ers receiving group is dealing with a multitude of injuries. During the 2019 preseason, Pettis ran 46% of his routes out of the slot. 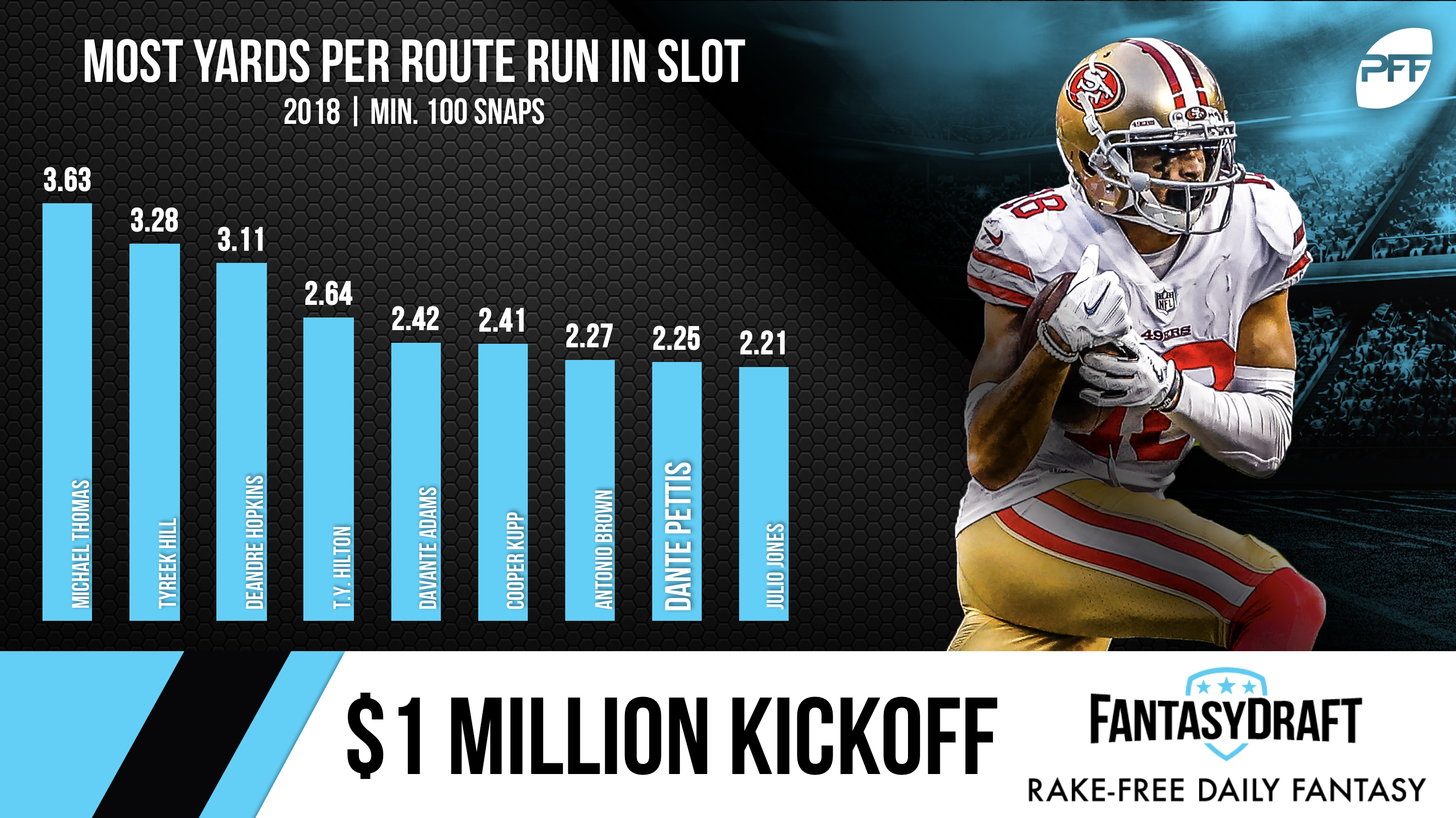 In 2018, Pettis ran 40% of his routes from the slot where he racked up an impressive 2.25 yards per route run — eighth-best among all receivers, and trailing only the NFL’s elite: Michael Thomas, Tyreek Hill, DeAndre Hopkins, T.Y. Hilton, Davante Adams, Cooper Kupp, and Antonio Brown.

The data behind this matchup for Pettis seems too good to be true. Get him into your tournament lineups.

Attacking the Ravens defense feels odd, which is precisely why we should not be afraid to do so in the right matchup. Wilson was electric in the beginning of last season before an injured hip in Week 7 knocked him out for the remainder of the year. He appears to be fully recovered and even got some action in Miami’s last preseason game, where he ran four of his five routes from the slot.

Wilson’s calling card is game-breaking speed, where his low 7.8-yard average depth of target is highly efficient while also creating big-play after-the-catch opportunities. In fact, Wilson’s 3.03 yards per route run last year was the highest rate among all NFL wide receivers (even better than Julio Jones’ second-best mark of 2.93).

With a small sample-size caveat, Wilson’s production out of the slot last season was absurd. He caught 12 of 12 targets for 231 yards and three touchdowns, yielding a ridiculous 7.22 yards per route run (first) and perfect 158.3 passer rating. Four of his catches were explosive plays of 15-plus yards.

It just so happens that Baltimore’s weak point is likely to be their slot defense (172 slot targets allowed were ninth most), particularly regarding the explosive play. 24% of slot targets against the Ravens last season produced an explosive play, the third highest rate among all NFL defenses.

The Bills forked over almost $15 million guaranteed to acquire Beasley’s services this offseason, and I expect them to get him involved in the offense right out of the gate.

The Jets signed Brian Poole this offseason to be their new slot corner — he graded as PFF’s worst slot cornerback last season.

Beasley may be a better fit as a cheap punt-play for your cash lineups as he should have a rock-solid floor. I also wouldn’t rule out the unlikely event of a ceiling type of game here – don’t forget that Beasley busted out a 9-101-2 line in Week 6 against the Jaguars last season.

Week 1 of the fantasy football season is historically one of the hardest to predict. Remember when the Bucs beat the Saints in the Superdome last year? Let’s take advantage of this uncertainty and stray from groupthink by capitalizing on these under-the-radar wide receiver options for your Week 1 DFS rosters.