The best DSTs to stream in fantasy in Week 6

Here are the defenses you should be looking to add in Week 6:

San Francisco is your top defense of the week, not because of their matchup, but because of the unit’s odds of becoming an every-week starter. Through five weeks, the 49ers rank behind only the Patriots in fantasy points per game (15.0), opposing passer rating (62.4), and points allowed (57). They also rank second in team defense grade.

The Rams may seem like an imposing matchup, but that’s hardly been the case in 2019. They’re giving up the 10th-most fantasy points per game to opposing defenses (8.3). Their offense line ranks second-worst in pressure rate over expectation. And Jared Goff is averaging a 77.7 passer rating over his last 13 games — which, for perspective, is less than Brock Osweiler’s career average (78.0). The 49ers are an easy top-five defense this week, next week (against Washington), and, hopefully, most weeks moving forward. 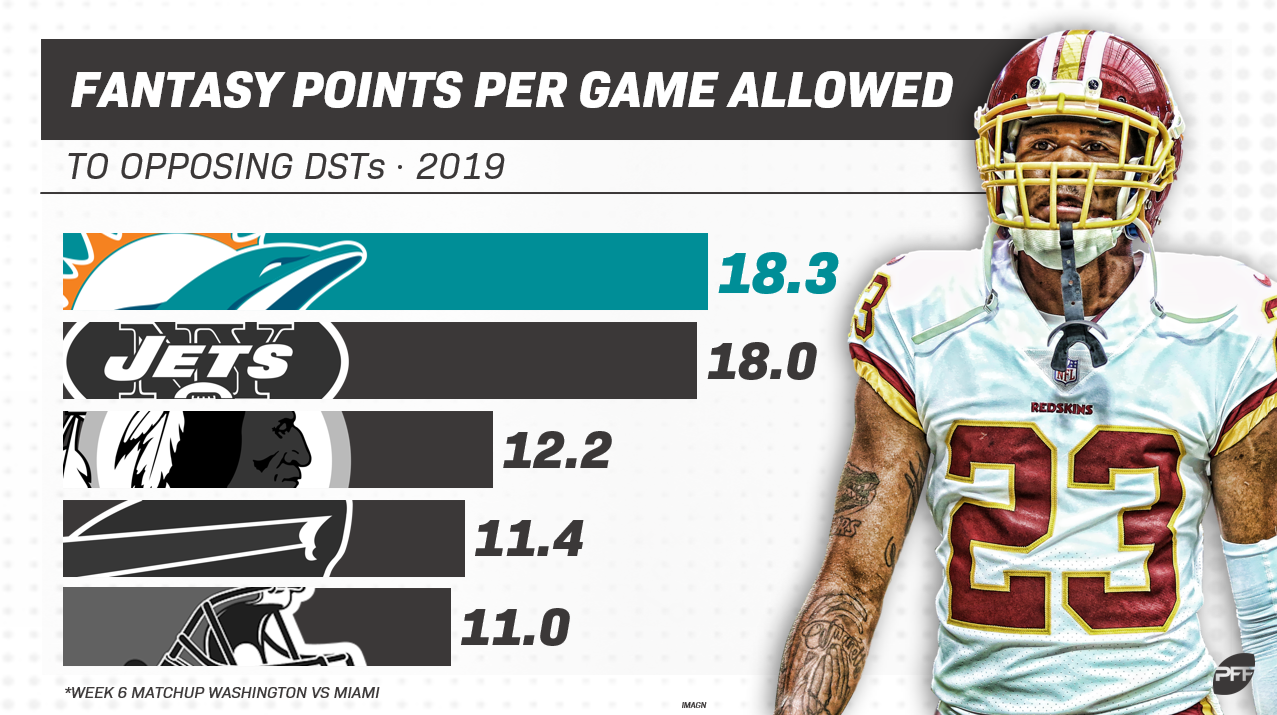 By nearly every measure, the Redskins have a below-average defense. That is true, but the Miami Dolphins might have an offense that is historically bad. They've scored just 26 points this year, which is the fewest of any team through four games this past decade. They also rank bottom-three in points per drive, yards per play, yards per pass attempt, yards per carry, sacks per dropback, turnovers per play, and a number of other metrics. Most importantly, they’re giving up a league-high 18.3 fantasy points per game to opposing defenses. No other offense comes close, and, among defenses, only the Patriots average more (19.0). This should be enough to consider Washington as a top-six defense in Week 6.

If Sam Darnold is out Sunday, move Dallas up one spot, ahead of Washington. If Darnold is active, move Dallas down one spot, behind Carolina. Across three games, Luke Falk is averaging 138.7 yards, 0.0 touchdowns, 1.0 interceptions, and 5.3 sacks per game. Over this span, the Jets are averaging just 7.7 points per game. Even if Darnold suits up, this should still be an advantageous matchup. New York has, easily, the league’s worst pass-blocking offensive line. New York’s quarterbacks average the 10th-quickest time to throw, but still rank worst in pressure rate.

Like the 49ers, Carolina’s defense is probably too good to be sitting on your league’s waivers for much longer. The Panthers rank fifth in fantasy points per game (9.8), sixth in opposing passer rating (83.6), fourth in sacks per dropback (9.2%), and fifth in team defense grade. However, they do have their bye in Week 7, so we should only be concerned with what they can do for us this week. Luckily, they also have a top matchup – Tampa Bay's offense is giving up the sixth-most fantasy points per game to opposing defenses (10.0), after surrendering the seventh-most last year (9.0).

Seattle's defense ranks about average in almost all of our most significant metrics, but they do rank fourth in run-defense grade, which is probably the key to shutting down Cleveland’s offense. 30 different quarterbacks have played on over 150 snaps this season, and none of them rank worse than Baker Mayfield in passer rating (68.5) or interception rate (5.0%). Cleveland also ranks ninth-worst in sack rate, while Seattle ranks 12th-best in pressure rate over expectation. Expect top-10 production from Seattle this week, up against a Cleveland offense that is giving up the second-most fantasy points per game to opposing defenses (11.0).