• Houston Texans RB Dameon Pierce was the highest graded running back last week, which led the Texans to give him the starter treatment and rest him tonight.

• Green Bay Packers WR Romeo Doubs scores a touchdown in his second straight preseason game, making his case to be a starter.

PFF's fantasy football recap focuses on player usage and stats, breaking down all the vital information you need to achieve fantasy success in 2022. This is only focused on the players who are relevant in fantasy football leagues. 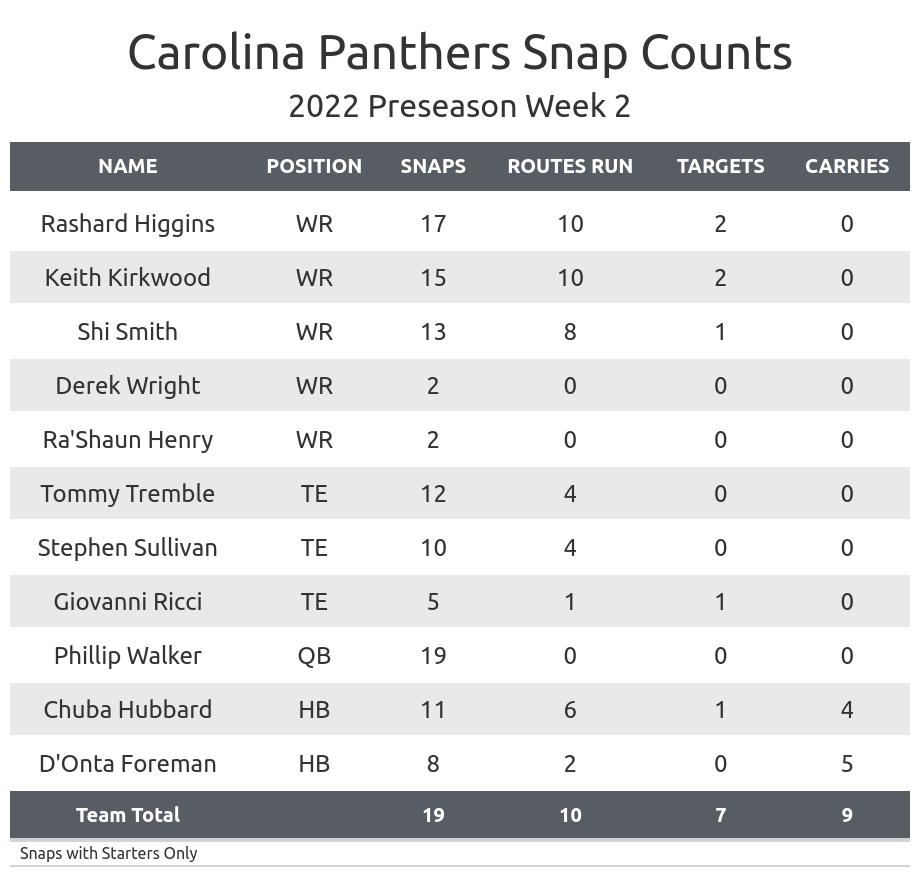 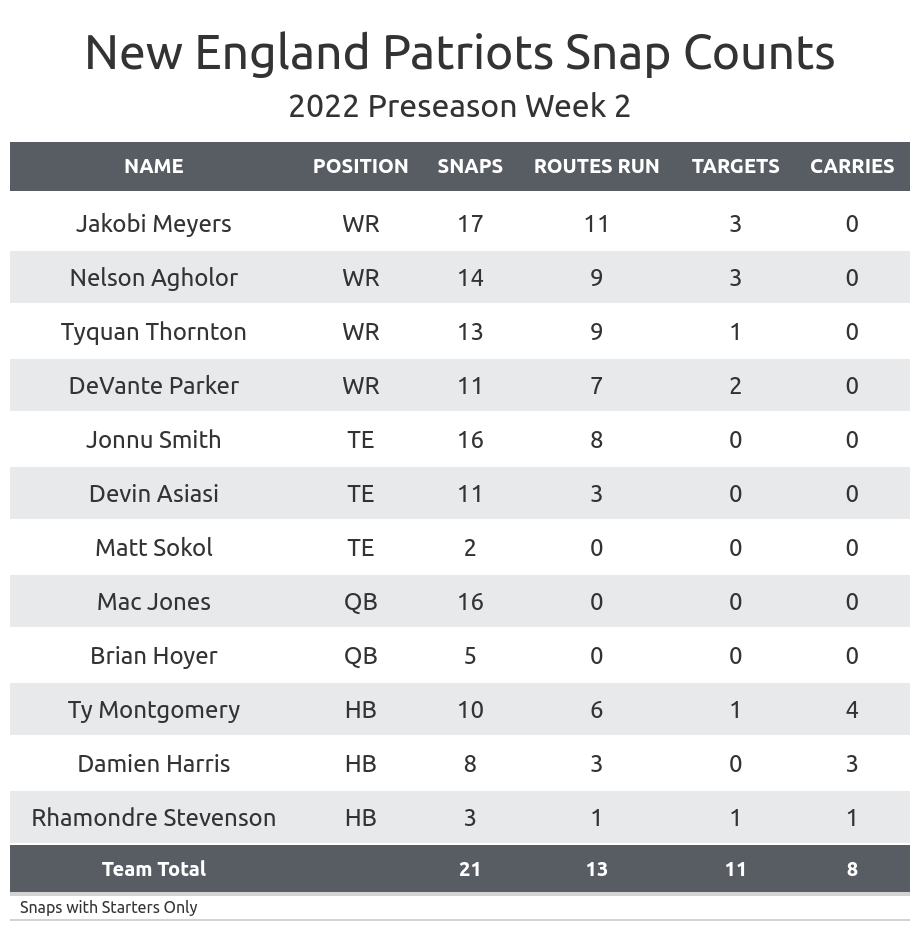 Draft Damien Harris and Rhamondre Stevenson: James White‘s retirement and Brandon Bolden‘s departure have left a void for New England on third downs. The Patriots used their backs in the preseason last year similar to how they did in the regular season, with a rotation by situation. White received every third-down snap with the starters.

New England mixed things up tonight, rotating by drive instead of situation. Harris took the first and fourth drives, Stevenson the second and fifth, and Ty Montgomery the third and sixth. Chances are Montgomery will see more passing-down work, and Harris and Stevenson more early-down work once the season hits. The fact that the Patriots were even willing to try all three backs on third downs is a good sign for Harris' and Stevenson’s fantasy value compared to last season. Harris lined up out wide on a snap, something he has done only 18 times in his three-year career. Stevenson received the work on the first two-minute drill, which he never did last season.

It’s worth noting the two rookie backs didn’t see any work with the first team, or the first two drives with the second team, and so they might not get a chance to contribute on offense this season unless there is an injury or trade.

Avoid Most Patriots Wide Receivers: Four of the top five wide receivers on the Patriots' depth chart were available tonight, with Kendrick Bourne as the only receiver sitting out. DeVante Parker and Jakobi Meyers took every snap on the first two drives, with Nelson Agholor joining in three-receiver sets. Tyquan Thornton started seeing playing time on the third drive, taking snaps away from Parker on the third drive and Agholor on the fourth. The situation will be even more complicated on the outside after tonight when Bourne returns.

Meyers is the only safe option, as he was the only one to play every drive with the starters. He should consistently be the Patriots' slot receiver.  He is one of the top sleeper wide receiver options this season.

Don’t Draft The Panthers' Backup RBs: The Panthers rested Christian McCaffrey, five wide receivers and four tight ends, among several others. The one exciting battle was the backup running back spot. Chuba Hubbard started the last preseason game and split time with D’Onta Foreman for the entire first half last week. Foreman received the start this season, but they remained in a rotation. He saw more snaps in rushing situations, and Hubbard more in passing situations.

Hubbard is likely the one with more standalone value, but that will only matter in very deep leagues. If there is an injury to McCaffrey, we could see these backs split 50-50 again, making it unnecessary to draft either player as a handcuff. 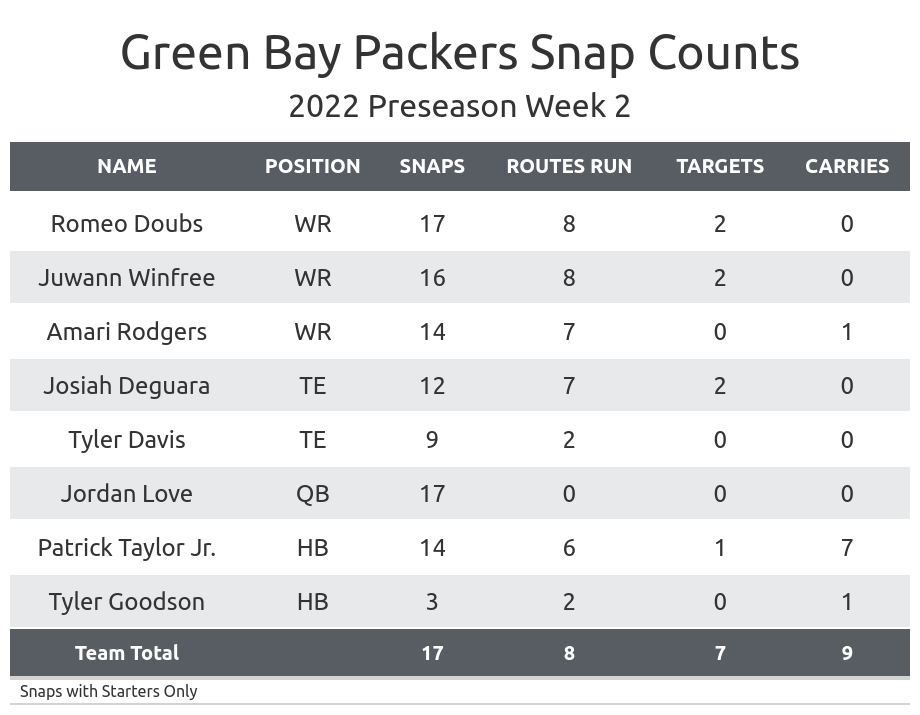 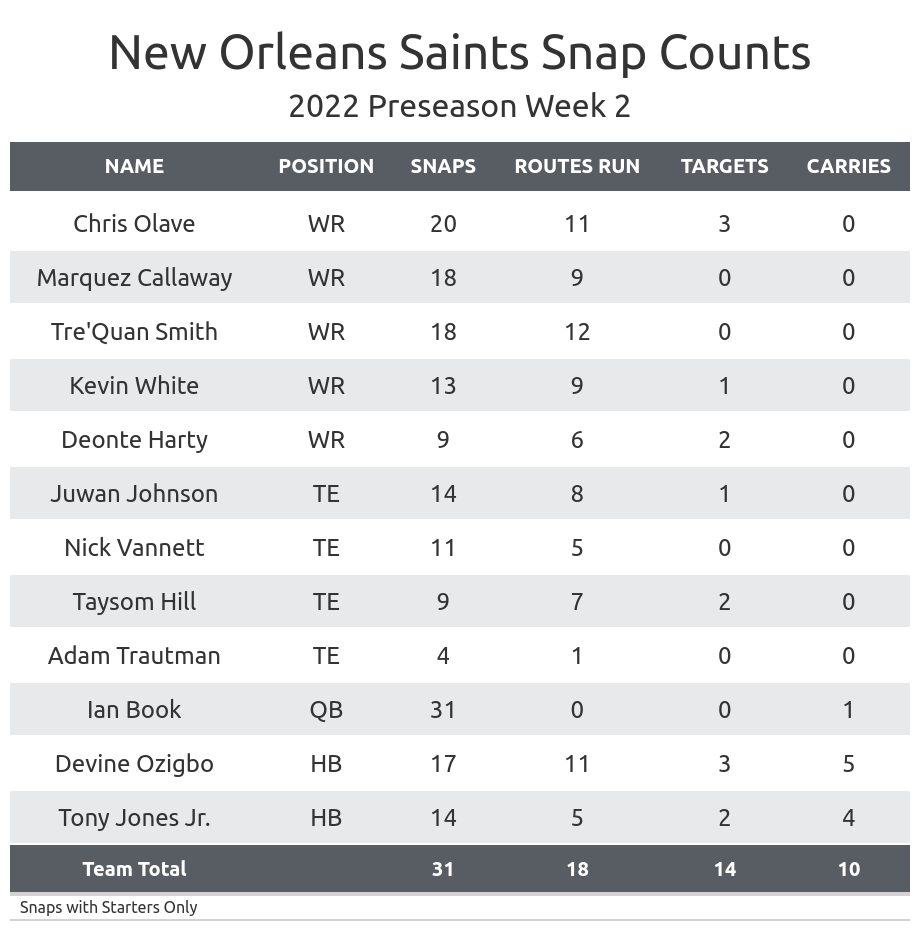 Remain cautiously optimistic about the rookie wide receivers: The Saints and Packers rested several players, including the top three wide receivers on Green Bay’s depth chart and the top two on New Orleans'.

Both Chris Olave and Romeo Doubs played the majority of the first-team snaps tonight, outside of Olave having a long drive off in the second quarter before returning for the two-minute drill.

You can’t take much away from a performance standpoint with backups playing, but both players led their teams in targets while they were on the field and both scored a touchdown. Ideally, we could have seen them with the real first team, but they rarely left the field while starting the game — which is the best you can expect.

Avoid the Saints Tight Ends: The Saints used all of their tight ends despite resting starters at most other positions. Four different tight ends were used with the first-team offense: Adam Trautman and Nick Vannett were both used more as run-blockers and should be off fantasy radars. Taysom Hill was used sparingly as a receiver, with Juwan Johnson running the most routes and leading the team in snaps with the first team. Johnson has the most potential and could be drafted in larger leagues as a deep sleeper, but the four-man rotation will make it hard for anyone to have any consistent fantasy value. 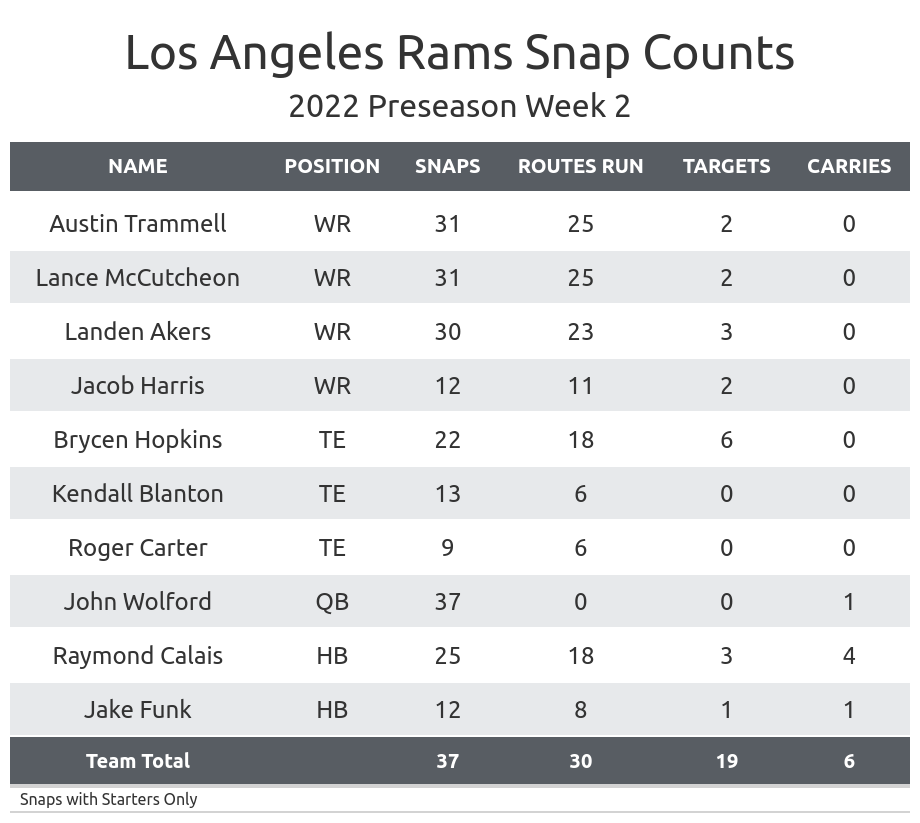 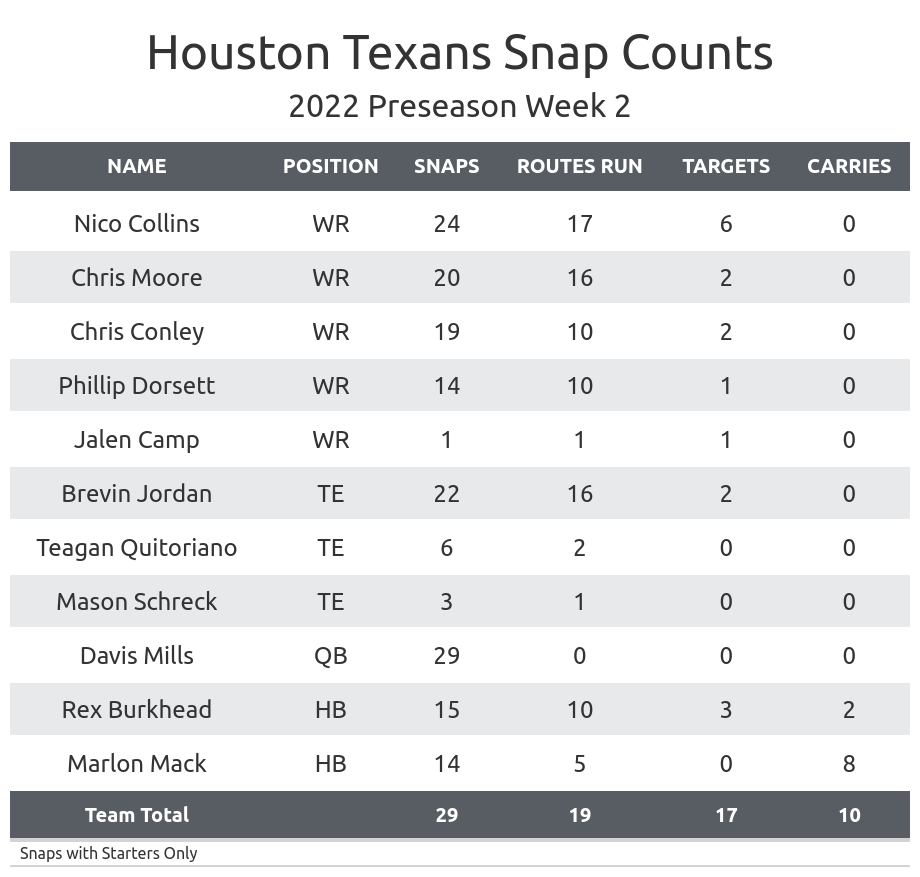 Have a backup plan when drafting Dameon Pierce: Marlon Mack started for the Texans last week and took all of the first and second down snaps with the first team. Pierce only played with the second team but was the highest-graded running back of the week. Pierce didn’t play in the first half, which was very disappointing until the Pro Football Network's Aaron Wilson revealed the Texans liked Pierce enough that he didn’t need to play. Mack was the early down back in the first half, and Royce Freeman took over in the second. This is a good indication that Pierce will be the starter in Week 1.

Texans receiving back Rex Burkhead didn’t play in the first preseason game but did  Friday night. He’s traditionally been a receiving back but led the Texans in first and second down snaps outside of two-minute drills last year. He was restricted to third downs, the two-minute drill and one random first down Friday night, which is bad news for Burkhead but good news for Pierce. Burkhead could still be draftable, as the Texans could be in a lot of pass situations this season, which would leave Burkhead on the field while Mack and Pierce are on the sideline. Mack is now probably just Pierce's handcuff.

Consider Brevin Jordan as a late-round tight end pick: The 22-year-old spent the first half of the season as a healthy inactive, but by November, he was on the Texans' active roster, and by December, he was playing a lot on passing downs. The fifth-round pick was the third-highest graded tight end, behind Kyle Pitts and Pat Freiermuth. He shared time with veteran Pharaoh Brown in Houston's first preseason game, Jordan played 11 personnel snaps over the first two drives, Brown took them on the third drive, and Jordan continued to see work with the backups.

Brown missed this game due to an injury, allowing Jordan to take every 11 and 12 personnel snaps. Chances are Jordan will continue to lose some time to Brown once the veteran is healthy, but it’s good to see the Texans trust Jordan in all passing situations without a rotation when needed. If Jordan improves, as we would expect of any 22-year-old, he could become the Texans' full-time starter who could also double as a fantasy starter.

Ignore the Rams Snap Counts As Usual: The Rams continued their preseason tradition of resting every starter as well as several key backups. Jacob Harris was the most notable player who played for fantasy football purposes. The wide receiver/tight end hybrid was the 142nd pick of the 2021 NFL Draft but had a forgettable rookie season due to a groin injury early in the season and a torn ACL and MCL later in the season. He played just 17 offensive snaps as a rookie — largely run blocks in the fourth quarter of wins. He was one of 11 wide receivers that measure in 6-foot-5-plus to receive an offensive snap last season.

He fully converted to wide receiver this season and started Friday night after missing last week. The former UCF Knight was part of a four-man rotation at wide receiver with the starters and caught one pass. He is intriguing because he could be a threat in the end zone if he gets some playing time, giving him some value as a punt play in DFS depending on his regular season usage.