SEATTLE, WA - SEPTEMBER 17: Tight end Jimmy Graham #88 of the Seattle Seahawks runs with ball during warm ups before a game against the San Francisco 49ers at CenturyLink Field on September 17, 2017 in Seattle, Washington. The Seahawks won the game 12-9. (Photo by Stephen Brashear/Getty Images)

In what seems to be an annual ritual, the Green Bay Packers added a veteran tight end, signing Jimmy Graham to a three-year deal. This move came on the same day that Green Bay parted ways with long-time receiver Jordy Nelson.

Once a transcendent fantasy force, Graham’s production has declined following a knee injury that cut short his 2015 season. Previous to that season, Graham was dominant. In a four-year stretch from 2011 to 2014, he racked 85 or more targets in every season with two 1,000-yard campaigns and three years with double-digit touchdowns (he had nine in the other season). Graham never finished worse than third among tight ends in fantasy scoring and was twice the No. 1 option at the position.

His numbers tailed off after he was traded to the Seahawks in 2015. Still, he was fantasy’s No. 9 tight end before his injury. Graham bounced back in 2016 with 923 receiving yards and six scores, which propelled him to a second-place fantasy position. 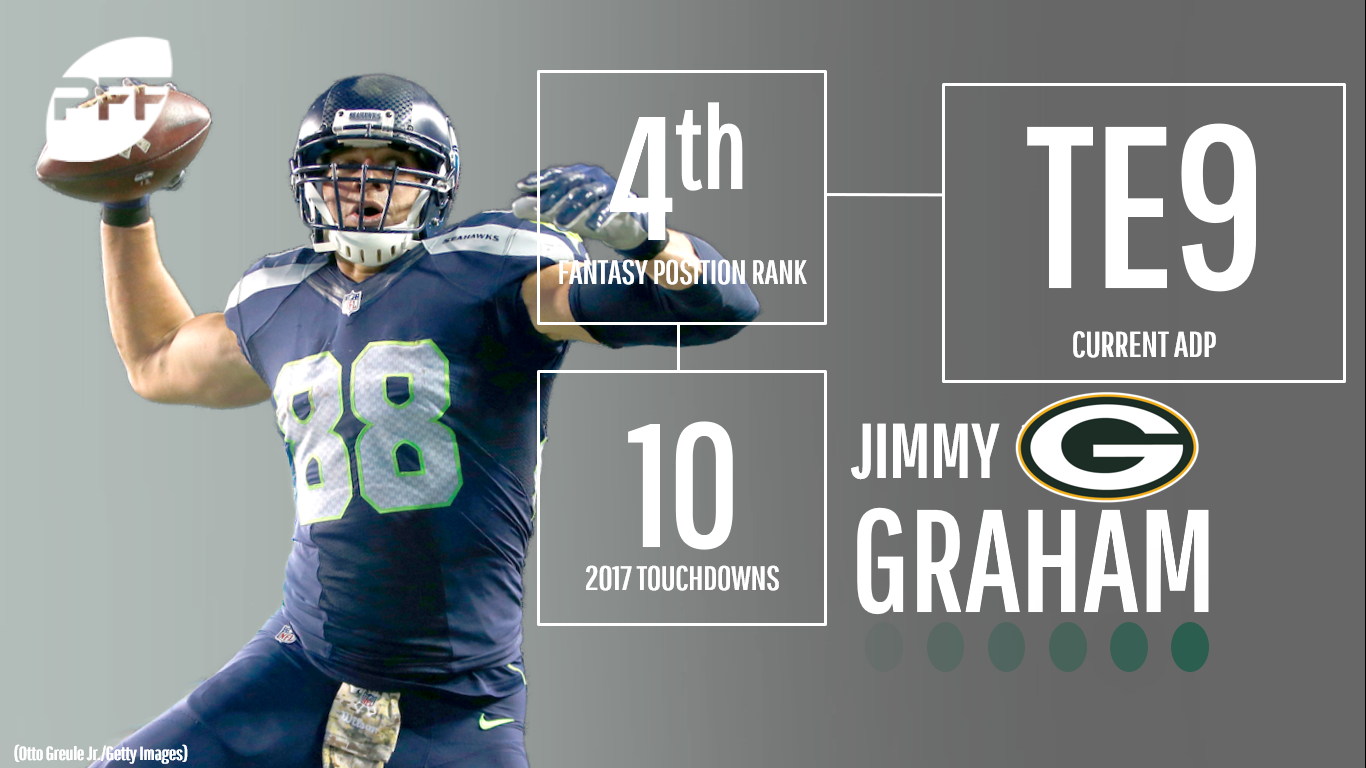 Last season, he led all tight ends with 10 scores, and was one of just three players in the league to top double-digits in touchdown receptions. Despite his productivity in the end zone, Graham’s yardage total dropped off a cliff with just 520 yards on 57 catches. It was the first time in his career that Graham averaged fewer than 10 yards per reception. But for fantasy purposes, he still managed to finish fourth at tight end.

There’s fantasy appeal any time a pass-catcher is paired up with Aaron Rodgers. However, we have been down this road recently with Martellus Bennett, who quickly fizzled in Green Bay. That being said, Graham doesn’t come with Bennett’s injury baggage. He’s also in an intriguing spot given the current state of the Packers’ depth chart. With Nelson gone, Davante Adams is locked in as the top target. Randall Cobb is still there as well, but his productivity has declined over the last three seasons. So Graham is in the mix with Cobb as the No. 2 target.

He isn’t the player we saw from 2011 to 2014, but Graham showed last season that he’s still a force in the red zone. Nelson has been Rodgers’ favorite red-zone target over the past several seasons, so those targets will need to go somewhere. Graham is a good candidate to get some of those looks. There’s enough appeal here to still consider Graham as a mid-range TE1 option even in his age-31 season.