Some fantasy football players are consistent. Antonio Brown, for example, is running on a streak of six-straight top-five PPR finishers among wide receivers. Further down the ranks, Philip Rivers has finished between eighth and 14th among quarterbacks in each of the last five years. With those guys, barring aging and injury, you basically know what you are going to get in a given season.

Others aren’t so predictable. Or at least, they are predictable in their unpredictability. Today, I’m taking a look at the roller coaster players of recent vintage — the fantasy options whose year-to-year results have bounced around so much that you might have a hard time predicting what is coming next from them.

[Editor's Note: Sign up for a FREE seven-day trial today to get access to all of PFF's fantasy stats, rankings, projections and more!] 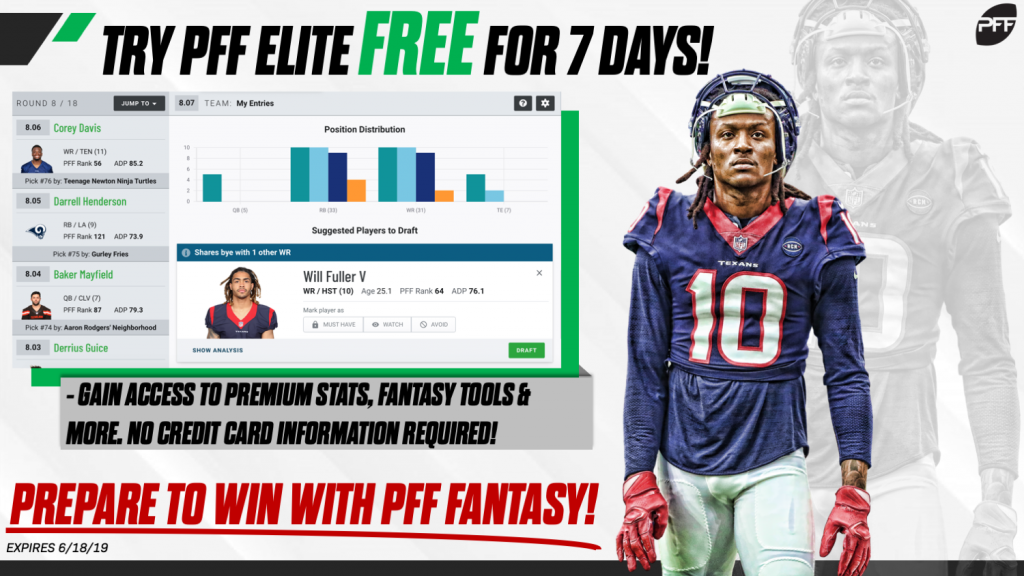 In a way, this is an exercise for fun, checking in on players who have bounced around. But it also carries plenty of fantasy value. As a drafting community, we tend to be reactionary, which means we tend to be overreactionary.

A player whose results bounce around a lot from year to year will generally see his ADP bounce around even more generously. It’s one thing to finish 15th three years in a row. A player’s ADP will level off. It’s another thing entirely to finish 15th, then fifth, then 15th again. The year after the player finishes fifth, his ADP will generally skyrocket, and the year after the second 15th-place finish, it’ll plummet, often beyond that 15th spot. Knowing when an ADP is likely to be an overreaction can help the savvy drafter avoid going too far.

Also, note there are no running backs in this piece. It’s rare for a running back to have significant bouncing in his fantasy results, absent injury or a Le’Veon Bell-esque missed season. The other positions lend themselves to roller-coastering far more.

I discussed these players’ roller-coaster tendencies in a Fantasy Decider piece recently, but in short: If you alternated drafting Newton and Ryan in recent years, things have either gone disappointingly for you or really well. The reality between the two is likely something around the average of their recent performances, a mid-range QB1 (assuming Newton is healthy for 2019). But as an example of the overreaction I discussed earlier: Newton is currently going as the No. 12 QB in current ADP. In our PFF Fantasy staff rankings? He’s seventh.

Over the last seven years, Rodgers has put up three top-two fantasy finishes, never in consecutive years. He’s played 16 games in a year and finished seventh and eighth — nothing to sneeze at, of course, but not up to Rodgers’ standards. And he’s added two injury-plagued years. Gone are the days of penciling Rodgers in as the sure-thing No. 1 fantasy quarterback; he still has that upside, but the downside is bigger than it’s ever been. 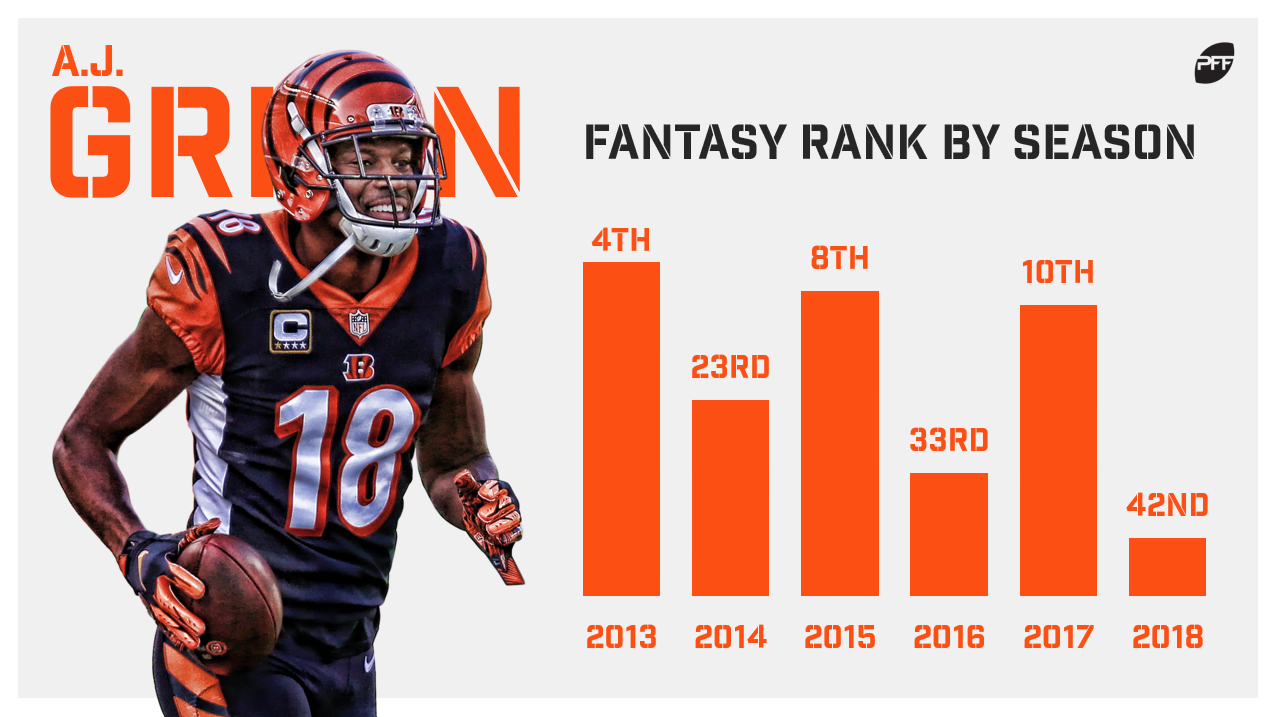 You can put a lot of credit/blame for Green’s roller-coastering on health; he’s been a top-10 fantasy receiver every year he’s played 16 games, but he missed three games in 2014, six in 2016, and seven in 2018. The emergence of Tyler Boyd could hurt Green in 2019 even if he’s healthy, but as it stands, both his ADP and staff rankings have him as the No. 13 receiver, and that’s actually a decent value if he can stay on the field.

The poster boy for inconsistency in fantasy results since joining the league, Cooper has bounced around a lot as a fantasy asset. Even in his Dallas tenure in 2018, Cooper finished as the No. 8 receiver over that span, but he did so with games of 38.0 and 49.7 PPR points and no others over 16.8. Cooper’s currently going 12th off the board in redraft ADP, and while that makes some sense for best ball leagues, it might be too optimistic for regular fantasy. 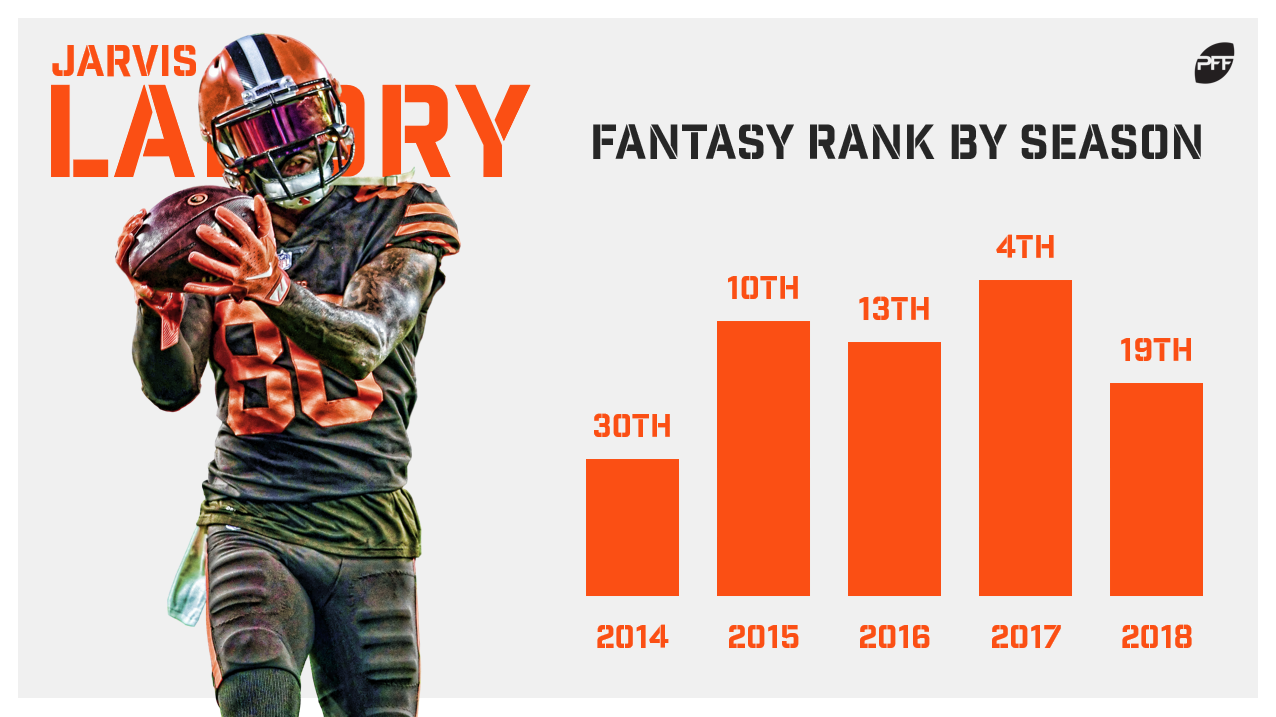 Landry’s roller-coastering has come down to his reception totals; he’s topped 100 receptions twice (110 in 2015 and 112 and 2017) and he’s been a top-10 PPR receiver both years. He’s had 94 or fewer three times and been 30th, 13th, and 19th in those years. The Browns offense has sky-high potential in 2019, but it’s the first year of Landry’s career where he’s definitely not going to be the offense’s No. 1 option, and that should push him down his range of outcomes.

Fitzgerald turns 36 in August. The most PPR points by a receiver who was 36 or older by Dec. 31 of a given season was Jerry Rice, who put up 257.1 points as a 40-year-old in 2002. The most points by a receiver not named Jerry Rice was Terrell Owens, who put up 224.3 points as a 37-year-old in 2010. For context, that would have been the No. 15 receiver in 2018. Pairing Fitzgerald with an electric quarterback and an intriguing new head coach could pay dividends, but the roller coaster might not have any of its old heights left.

Hilton’s down years largely coincide with the years Andrew Luck has struggled or missed. That said, his current ADP is the No. 10 fantasy receiver, which aligns with his staff ranking, and that’s a level Hilton’s reached only once in his career. The overreaction might have Hilton going too high this year.

Evans has been a low-end WR2 of better ever year of his career, but even within that small range, he’s bounced around. Coming off a WR9 finish in 2018, both his ADP and his staff ranking have him as the No. 8 receiver in 2019. The interesting thing is that he’s pretty clearly the start of a tier at receiver, both in our rankings and in ADP. In the staff rankings, all our rankers have the same top-seven, even if the order is different, then the next group starts off with Evans and others. In ADP, Fantasy Football Calculator gives high and low picks for every player; every receiver ahead of Evans has a ceiling in the first round and a floor at least in the second, while every receiver Evans and beyond has a ceiling in the second and a floor in the third or later.