Metrics that Matter: Just how good (or not) is Colin Kaepernick?

(“Metrics that Matter” is a short feature that appears every weekday, highlighting a notable fantasy lesson to be learned from PFF’s advanced stats.)

I love finding interesting and unique stats. I could spend (and typically do) all day with my head buried in a number of different spreadsheets looking for the perfect stat to tell me what’s going on with a specific player. This was, of course, a main reason why I’m doing this series each weekday. Before I started writing this series, I would just post these different stats on twitter and sit back and watch the retweets fly in and debates unfold in my mentions. The most-debated player this offseason has been Colin Kaepernick: either he’s terrible and a locker room distraction and that’s why he’s unemployed or he’s a starter-level talent who is being blacklisted by the NFL due to political reasons.

I don’t care enough to debate this from a non-statistical level, but I do think I have some interesting statistics that can add fuel to either side’s fire.

The Good: Throughout the history of the NFL, among all 186 quarterbacks to record at least 1,500 attempts throughout their careers, Colin Kaepernick ranks fifth-best in passing touchdown to interception ratio (72:30.)

Since 2012, Kaepernick ranks 15th in passer rating of 30 quarterbacks to total at least 1,000 pass attempts. He also ranks third-best of these 30 quarterbacks in rushing yardage.

Kaepernick’s passer rating and touchdown to interception ratio are constantly being referenced by his proponents in arguments for why he’s unjustly unemployed. I’m not sure that’s right, however. Really, I think they’re highlighting a major flaw in traditional passing stats – that they neglect how often a quarterback is getting sacked. Sacks are major drive-killers, in that they result in the loss of a down and negative yardage.

Over the past 10 seasons, quarterbacks average a 61.7 passer rating when pressured and a passer rating of 95.0 when operating from a clean pocket. Rather than make a low-percentage throw, Kaepernick is choosing to take a sack. After looking at the data, I’m not sure that’s necessarily the right decision. Since 2009, only 6.7 percent of drives where a quarterback was sacked resulted in a touchdown. Either way, a sack, like an interception, is a negative quarterback play that should be factored into the equation when looking at a quarterback’s efficiency. One such quarterback stat does factor in sacks as a negative play: adjusted net yards per attempt . Over the past three seasons, among all 29 quarterbacks with at least 800 attempts over this span, Kaepernick ranks ahead of only Blake Bortles in adjusted net yards per attempt.

This isn’t just a product of Kaepernick’s offensive line, either. For perspective, last season, Kaerpernick was sacked on 8.7 percent of his dropbacks (sixth-highest), while Blaine Gabbert was much closer to league-average (5.6 percent) at 5.8 percent of his dropbacks. Last season, in Gabbert starts, the 49ers averaged 22.2 points per game with a negative-5.8-point differential. In Kaepernick starts, the 49ers averaged only 18.0 points per game and with a negative-12.9-point differential.

Kaepernick is still unemployed and is unlikely to be named a starter wherever he lands. As for my own personal opinion on Kaepernick, I think he was once an average NFL starter, but has been playing at a backup-caliber level the past two seasons.

Among all 33 quarterbacks to play at least 500 snaps, Kaepernick was our worst-graded quarterback in 2015. In 2016, he ranked seventh-worst of 30 qualifying. Prior to that, he hovered around the NFL average. 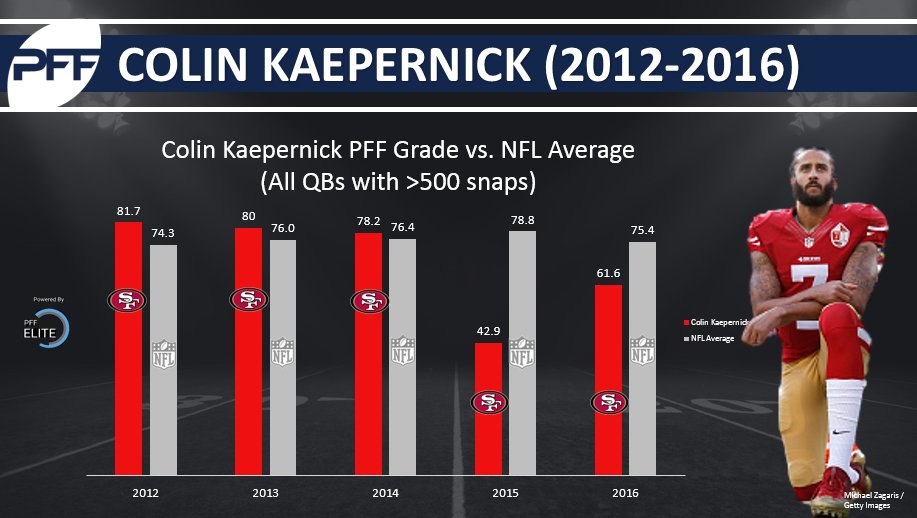