BALTIMORE, MD - OCTOBER 01: Le'Veon Bell #26 of the Pittsburgh Steelers scores a touchdown as C.J. Mosley #57 of the Baltimore Ravens tries to stop him in the fourth quarter at M&amp;T Bank Stadium on October 1, 2017 in Baltimore, Maryland. (Photo by Tasos Katopodis/Getty Images)

There is no offseason in the NFL. All right, technically speaking there is an “offseason.” But things move pretty quickly from the combine to free agency to the draft. And once we hit that point, it’s fantasy football time all over again. Sure, fantasy drafts aren’t for a couple months, but you’re going to end up behind if you don’t start prepping now. To help you with that, I put together my top 200 overall players in PPR scoring with team defenses and kickers included. If you want to see how my rankings compare to our other rankers, make sure you check our staff fantasy football rankings. 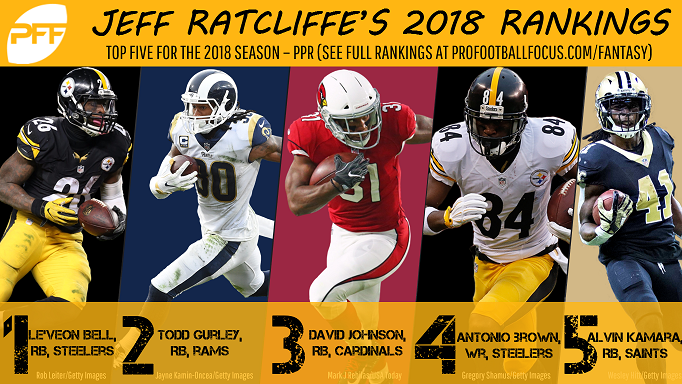 1. Le'Veon Bell, RB, PIT – Splitting hairs at the top spot, but Bell’s volume give him the slight edge over Gurley for the top spot.

3. David Johnson, RB, ARZ – Johnson returns from injury, but should see plenty of work as the Cards’ primary offensive weapon this year.

4. Antonio Brown, WR, PIT – He’s the greatest wideout of his generation and continues to pad his resume to be placed in the conversation of greatest of all time.

5. Alvin Kamara, RB, NO – Mark Ingram’s suspension vaults Kamara up a few spots. Don’t expect him to last much further that the middle of the first round.

6. Ezekiel Elliott, RB, DAL – This scoring format isn’t ideal for Elliott, but he’s still a strong option thanks to his heavy volume as a runner.

7. Saquon Barkley, RB, NYG – What’s up, rook? Barkley is in a prime spot to produce with little competition for touches on the Giants’ depth chart.

8. Dalvin Cook, RB, MIN – Cook got off to a hot start before the injury last season. Expect him to pick right up where he left off.

9. Kareem Hunt, RB, KC – We may see a slight reduction in Hunt’s volume, but he remains a strong option in a very favorable offense.

10. DeAndre Hopkins, WR, HOU – With Deshaun Watson back under center, the sky is the limit for Hopkins’ fantasy value this year.

11. Melvin Gordon, RB, LAC – He isn’t the most efficient runner, but Gordon has almost no competition for touches in a strong offense.

12. Leonard Fournette, RB, JAX – Like Elliott, Fournette doesn’t benefit from PPR scoring as much as some of the other top running backs, but his volume as a runner places him on the fringe of Round 1.

13. Julio Jones, WR, ATL – Sure, the touchdown productivity isn’t where you want it to be, but Jones has been spectacularly efficient from a yardage standpoint over the last four seasons.

14. Michael Thomas, WR, NO – Thomas is coming off a 100-catch season and the scary thing is that there’s still room to grow.

15. Odell Beckham Jr., WR, NYG – He has arguably the highest ceiling of any wideout, but the overall state of the Giants’ offense gives Beckham a slightly lower floor than the top four wide receivers in these rankings.

16. Devonta Freeman, RB, ATL – Freeman is still splitting touches with Tevin Coleman, but his use in the red zone keeps in in the RB1 conversation.

18. Rob Gronkowski, TE, NE – When he’s on the field, Gronk is the most dominant player at his respective position in the league.

19. A.J. Green, WR, CIN – Thought he’s overshadowed by other names at the position, Green has been about as consistent as they come in his seven years in the league.

21. Christian McCaffrey, RB, CAR – He may not see an increase in his workload as a runner, but McCaffrey led all running backs in targets last season and is a good bet to do so again.

22. Adam Thielen, WR, MIN – Thielen is coming off a 90-catch year where he put up nearly 1,300 yards, and he gets an upgrade at quarterback. Giddy up.

23. LeSean McCoy, RB, BUF – Some may have McCoy higher, but keep in mind that he’s entering his age-30 season with declining efficiency numbers on a potentially bad offense. 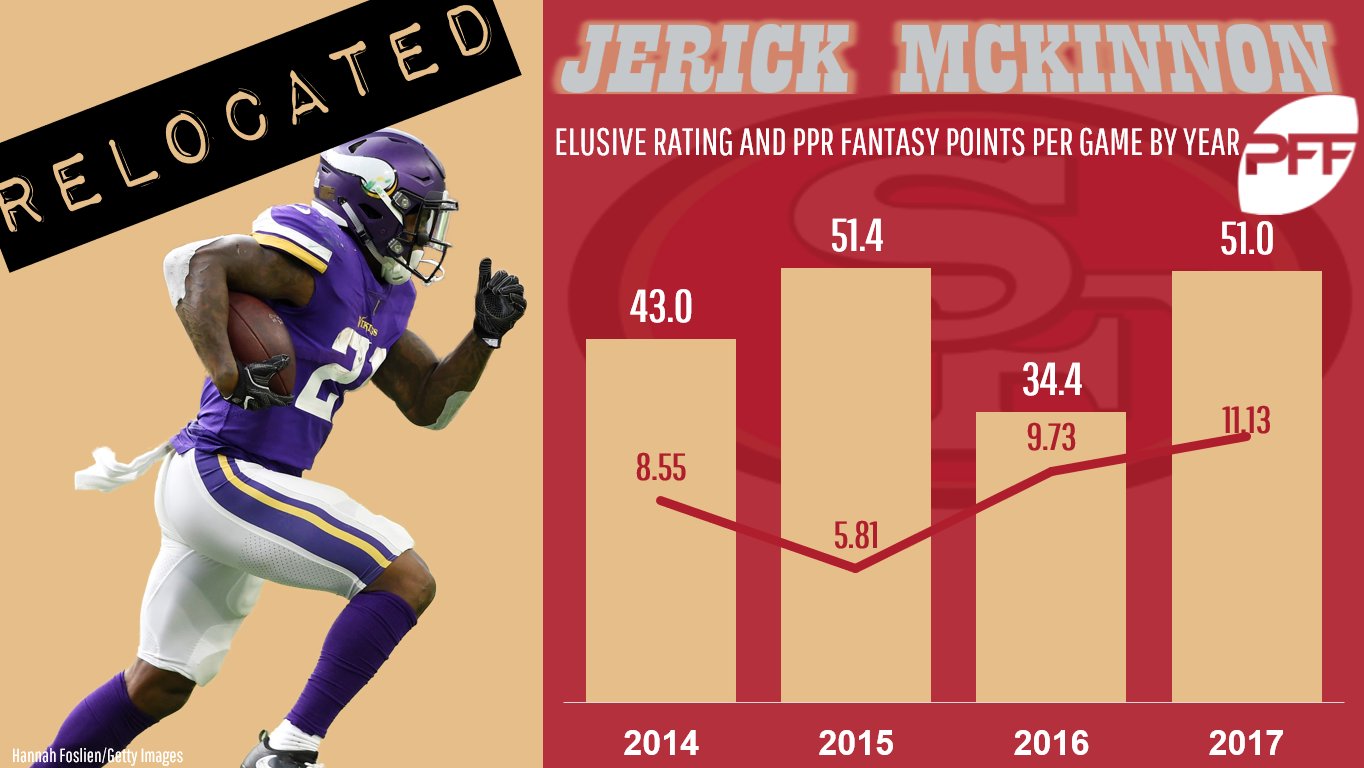 24. Jerick McKinnon, RB, SF – One of the top candidates for breakout fantasy option of the year, McKinnon is primed for a big role in Kyle Shanahan’s offense.

25. T.Y. Hilton, WR, IND – This ranking comes with an asterisk. Hilton is a strong option if Andrew Luck is able to return.

26. Kenyan Drake, RB, MIA – Drake is coming off a strong 2017 campaign, but some questions exist as to how much volume he’ll see this season.

28. Mike Evans, WR, TB – There’s no denying Evans’ upside, but his inconsistencies push him back to the third round of drafts.

30. Joe Mixon, RB, CIN – The Bengals addressed their offensive line woes this offseason, and those moves could help propel Mixon to a breakout.

43. Derrius Guice, RB, WAS – The rookie is slated for a two-down role in Washington, but Guice has the chops as a runner to still be an RB2 even without significant work as a receiver.

50. Royce Freeman, RB, DEN – There’s some chatter about Devontae Booker opening the season as the starter, but Freeman is the superior talent and is still the best bet to win the job in Denver. 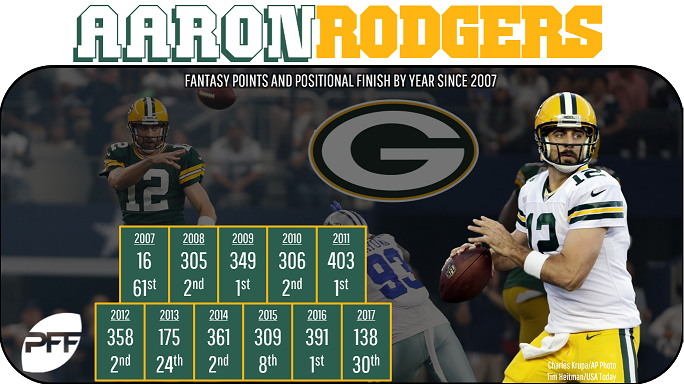 62. Aaron Rodgers, QB, GB – Will Rodgers fall all the way to the sixth round in drafts? No. But this is where the top quarterback should be valued this year.

76. Randall Cobb, WR, GB – Don’t overlook the fact that Cobb is back as the No. 2 receiving option in Green Bay.

85. Deshaun Watson, QB, HOU – The upside is undeniable, but be careful with Watson. We only have an extremely small sample size where he put up big numbers against mostly poor defenses.

95. Sterling Shepard, WR, NYG – With Brandon Marshall out of the mix, Shepard figures to be more of a consistent option this year and is a sneaky middle-round pick.

108. Andrew Luck, QB, IND – If we knew he was playing, Luck would be significantly higher in these rankings. However, the longer he doesn’t throw, the more he slides. 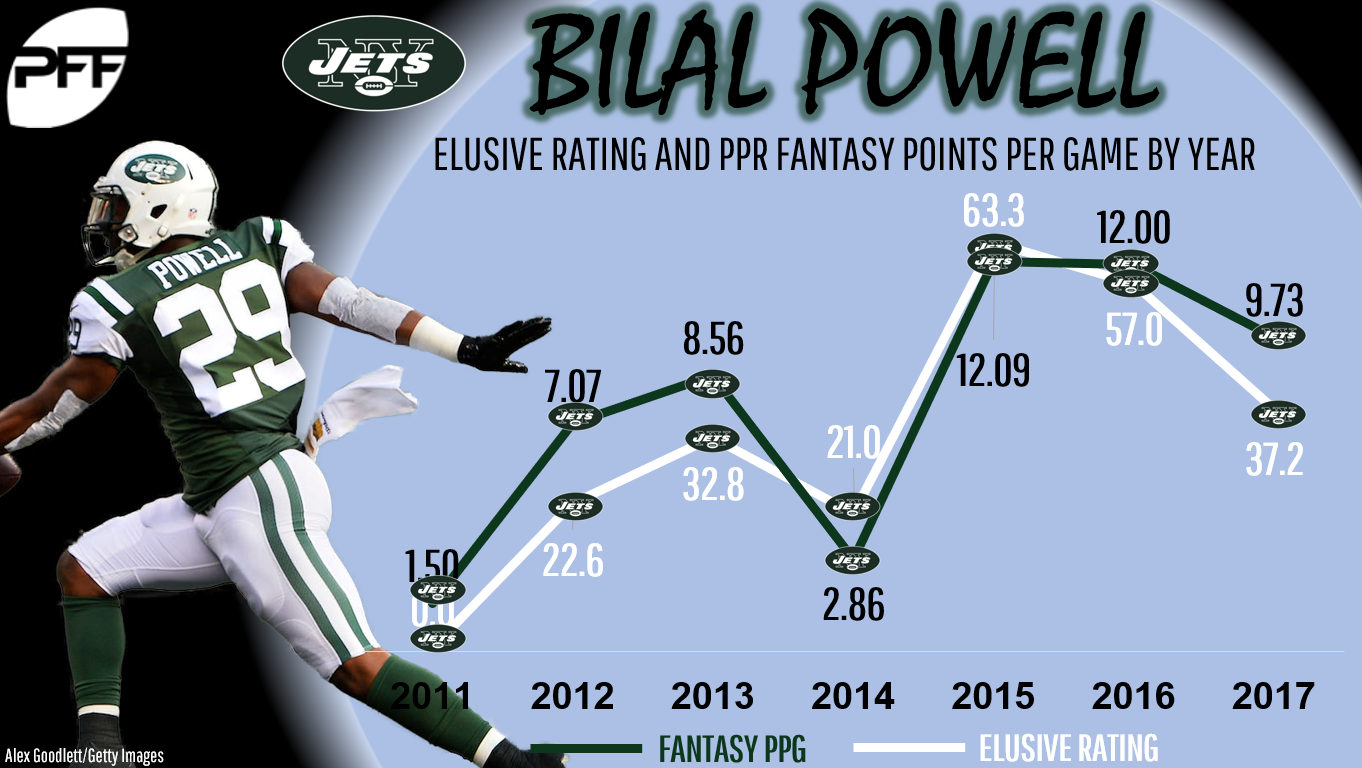 118. Jordy Nelson, WR, OAK – If you draft Nelson, remember that you’re drafting the 2018 version who is entering his age-33 season and no longer has Aaron Rodgers as his quarterback.

130. Kenny Golladay, WR, DET – Golladay is dripping with upside, but he’s likely to be an inconsistent fantasy option as the No. 3 receiver in Detroit.

143. Donte Moncrief, WR, JAX – Moncrief is the No. 2 in Jacksonville, not Dede Westbrook. Don’t let anyone tell you otherwise. 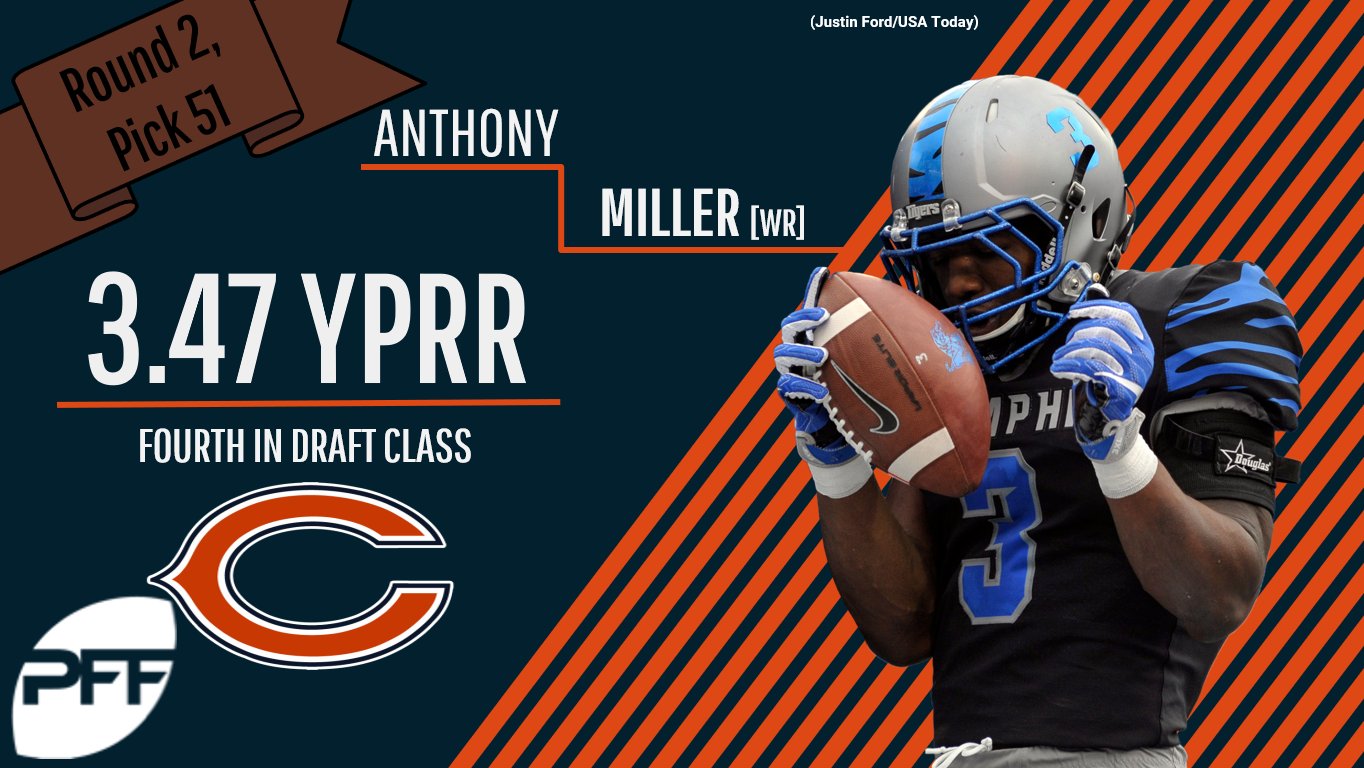 151. Anthony Miller, WR, CHI – The exciting rookie has a prime opportunity to step right in as the Bears’ No. 2.

155. Jaguars DST – There’s no way they last this long, but this is the range where you should look to take the top fantasy defense. Any earlier and you’re wasting value.

165. Martavis Bryant, WR, OAK – There’s a lot to like about Bryant from an upside standpoint, but keep in mind that his target share could be somewhat small as the No. 3 in Oakland.

170. Eagles DST – Pick 169 starts the 15th round of fantasy drafts, so this is the range where you should be looking to rank your defenses and kickers.