It’s Wednesday and that means it’s time to breakout the flex fantasy football rankings for Week 1 of the NFL season. Remember that rankings change throughout the week, so be sure to check our staff rankings for updates. 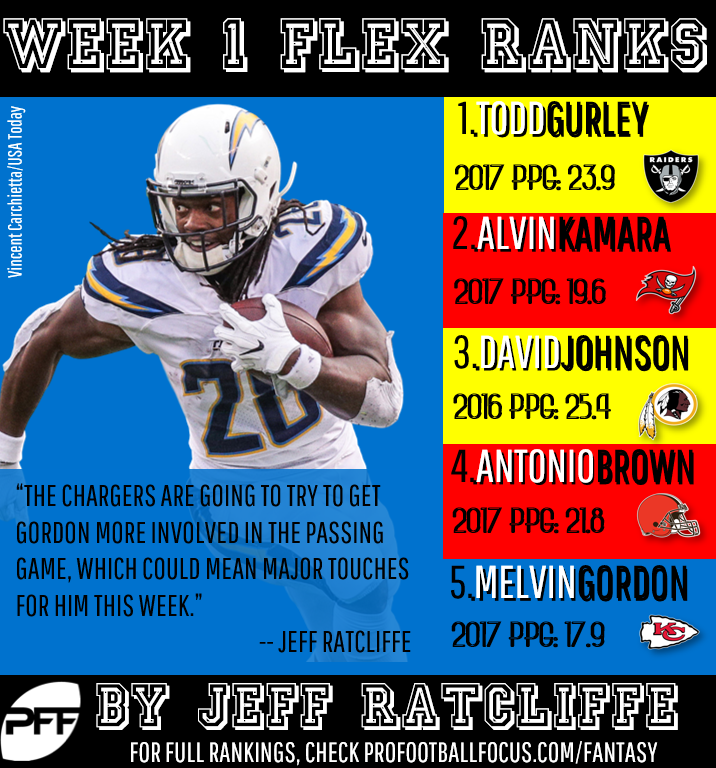 1. Todd Gurley, LAR at OAK (RB1) — The #ToddGurleyRedemptionTour is ready to kick off. Get your popcorn ready.

2. Alvin Kamara, NO vs. TB (RB2) — With Mark Ingram suspended, Kamara is poised for a big workload against a Bucs defense that he torched for three touchdowns last season.

3. David Johnson, ARI vs. WAS (RB3) — He's back from injury and will see a heavy workload with limited competition for touches in the Cardinals' offense.

4. Antonio Brown, PIT at CLE (WR1) — Brown has been banged up in the preseason, but he'll be ready to roll and gets a plus matchup in Week 1.

5. Melvin Gordon, LAC vs. KC (RB4) — The Chargers are going to try to get Gordon more involved in the passing game, which could mean major touches for him this week.

6. Ezekiel Elliott, DAL at CAR (RB5) — Yes, there are some concerns about the offensive line, but Elliott is still a rock-solid RB1 play even in a tough matchup.

7. Leonard Fournette, JAC at NYG (RB6) — Look for the Jags to pound the rock on the ground with Fournette in Week 1.

9. Christian McCaffrey, CAR vs. DAL (RB8) — He's coming off an impressive preseason and should see increased volume with Jonathan Stewart out of the mix.

10. DeAndre Hopkins, HOU at NE (WR2) – Hopkins gets Deshaun Watson back and will pick right up where he left off last season.

11. Saquon Barkley, NYG vs. JAC (RB9) — Don't worry about the preseason injury. Barkley will get his pro career started with a bang.

15. A.J. Green, CIN at IND (WR4) — Having John Ross on the other side of the field will really open things up for Green.