• We have collected three years of data on DraftKings’ single-game Showdown contests to find exploitable edges.

I published analyses for the last two seasons with simulated optimal roster allocations for DraftKings' CPT and FLEX spots in DFS contests, along with the commonly paired players for each CPT selection. Those will be part of the PFF Fantasy offerings this year, beginning with the Thursday Night Football game between the Los Angeles Rams and Buffalo Bills.

In this article, I’m going to walk through the contest and roster data collected from the largest contests in roughly 250 showdown slates from 2021, as I did before with the 2020 and 2019 data. In that data, we find many of the same exploitable trends to use this season, including which positions provide the most leverage in the CPT spot, and how DFS gamers can roster multiple and single positions in FLEX spots to gain leverage on the field.

The CPT spot is the highest leverage decision for any showdown roster, as it has a 1.5 times effect on scoring and salary. The data from roughly 250 contests last year show fairly rational positional allocations at CPT with a few likely edges. This study's position rankings are based on the team salary ranking. 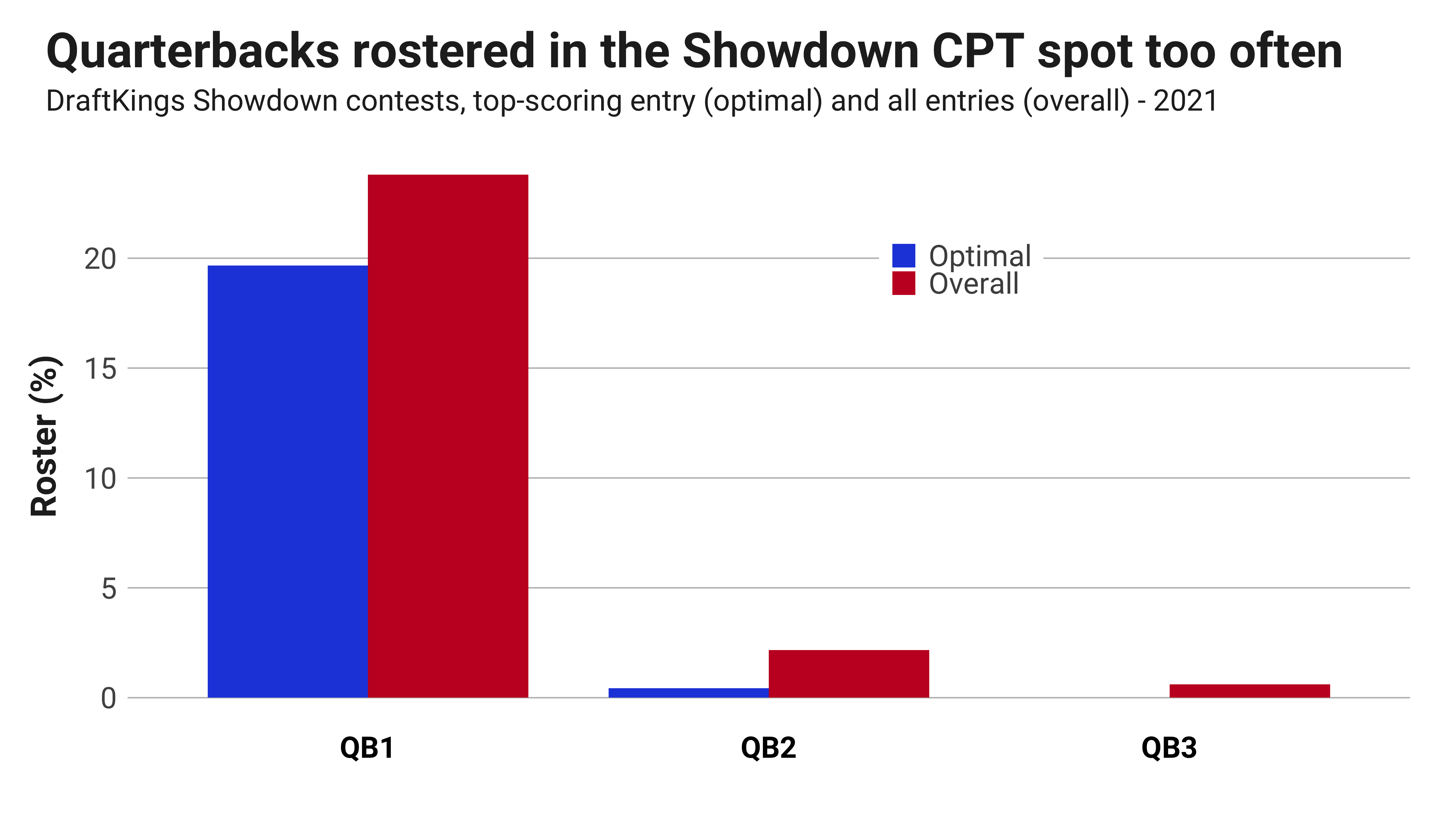 First-place entries in 2021 rostered quarterbacks less often than the field at large — a similar trend to what I found in the data from the last two years. In the last two seasons, quarterbacks have been the optimal CPT more often than in 2019 and earlier years, as a handful of top options provide exceeding returns due to their abilities to generate fantasy points through the air and on the ground. That said, showdown drafters have more than mitigated that advantage by rostering quarterbacks in the CPT spot more often than ever.

Quarterbacks like Josh Allen and Lamar Jackson were commonly hitting CPT roster percentages well above 40% in their contests, and the trend should likely accelerate this season with more differentiation at the top of the quarterback position. As is nearly always the case, fading the trend looks like the way to go in 2022. 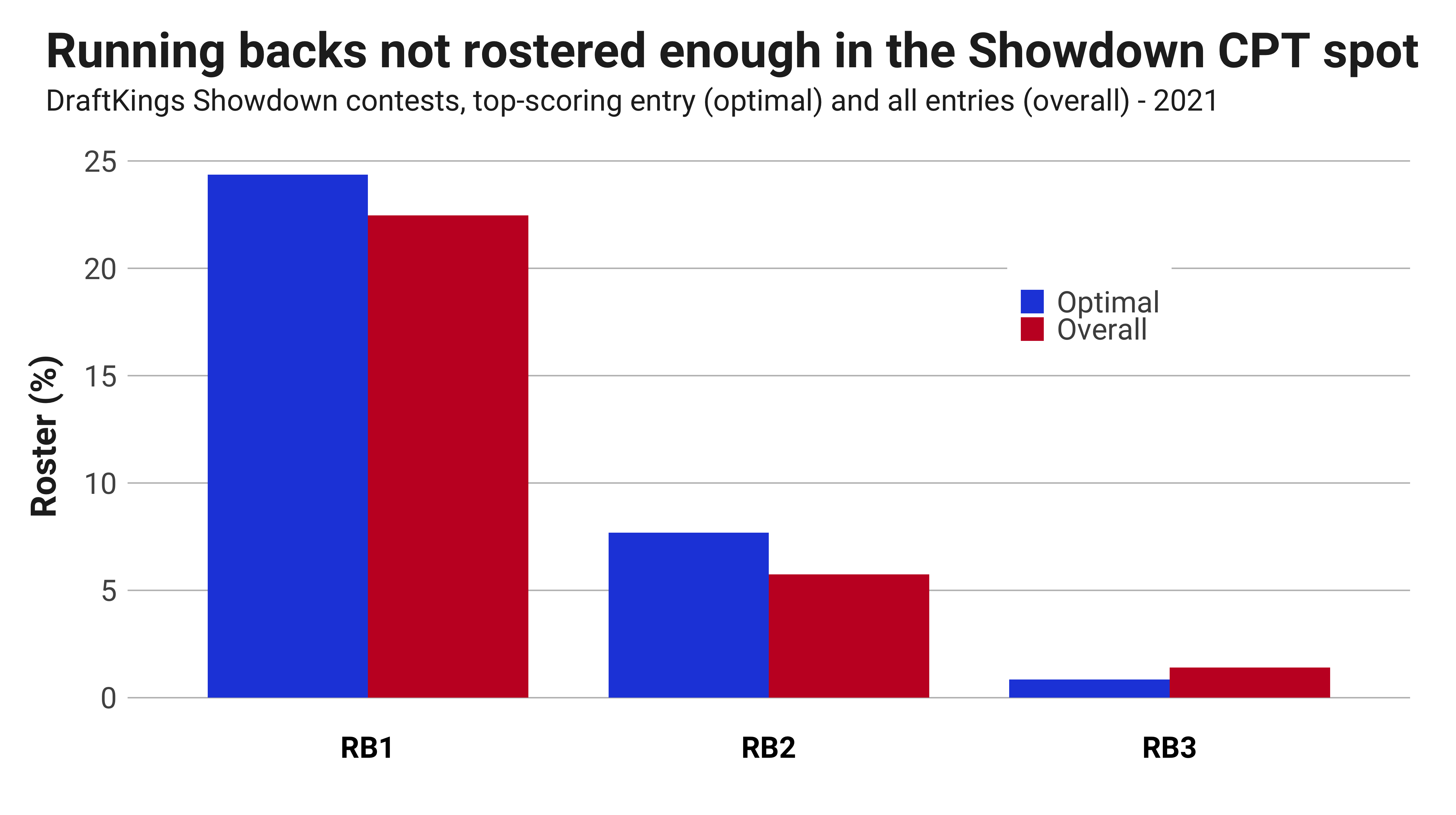 The running back position has similar CPT dynamics to what we saw in 2020, with positive leverage for those who used the CPT spot on either team’s most or second-most expensive running backs. The highest leverage was for the second running back on each team. 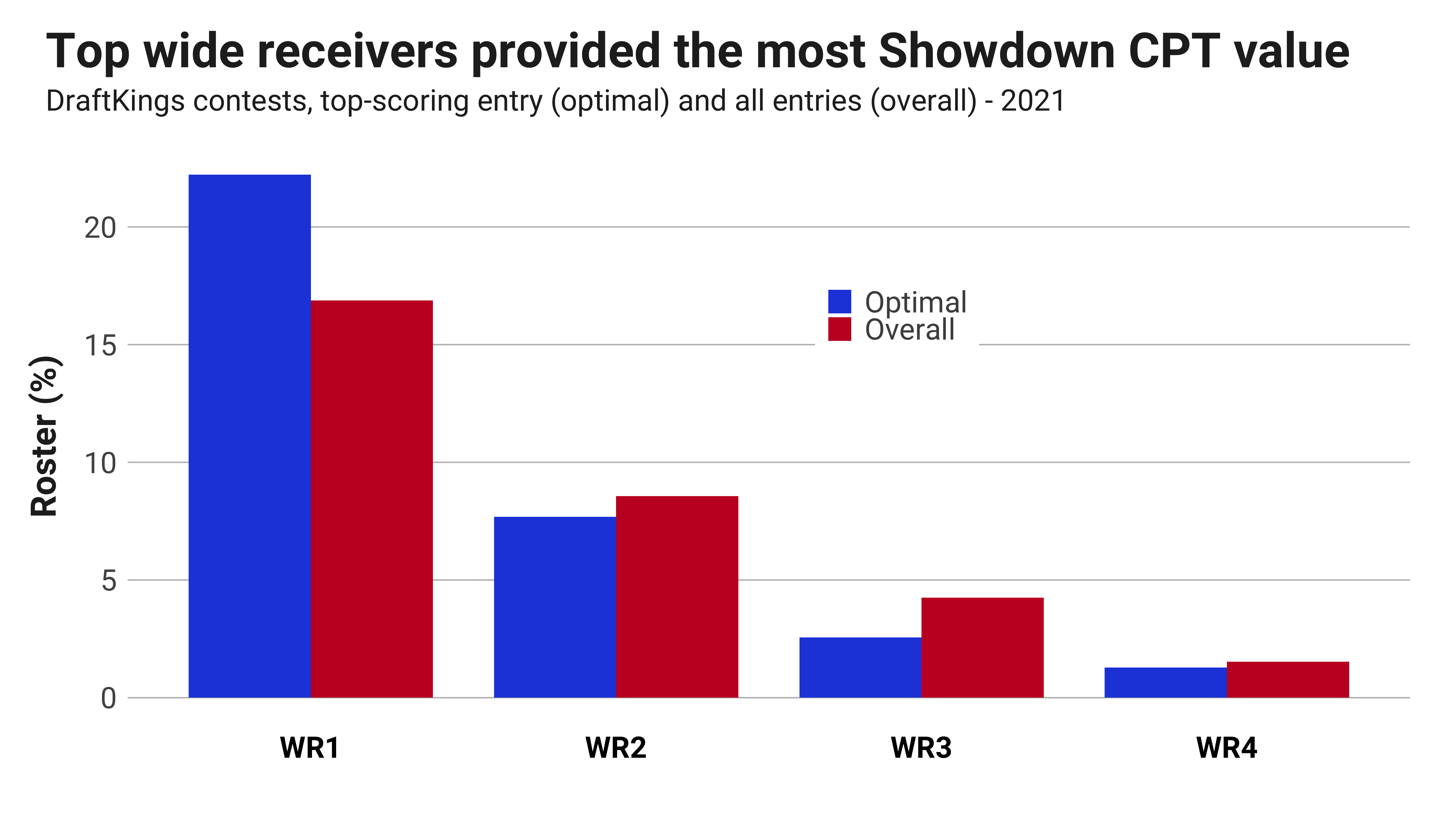 Overall, wide receivers provided positive leverage in the CPT spot, yet the WR1 was a much better choice in 2021 than WR2 leading the pack the prior season. Most notable was WR1s in the CPT spot's roster percentage decline, which left a lot of leverage for those putting studs such as Cooper Kupp into the CPT position. We now have three years of data showing the wide receivers are generally under-rostered as the CPT in the biggest contests. 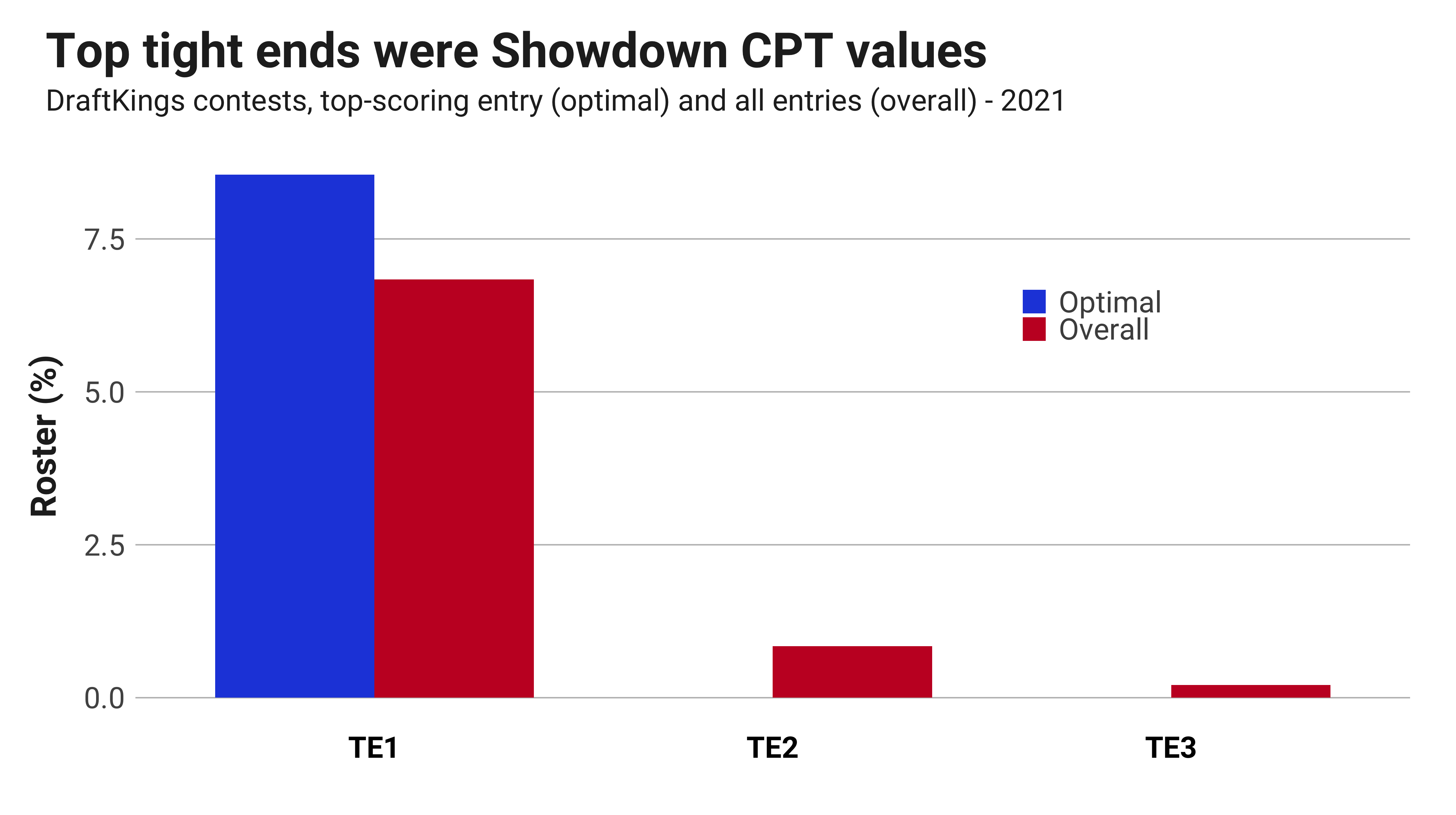 Tight ends have lower numbers across the board on an absolute basis but grabbing the top tight end as CPT was profitable in 2021. The data shows little evidence it’s worth getting cute and throwing a dart at a team’s second or third tight end. 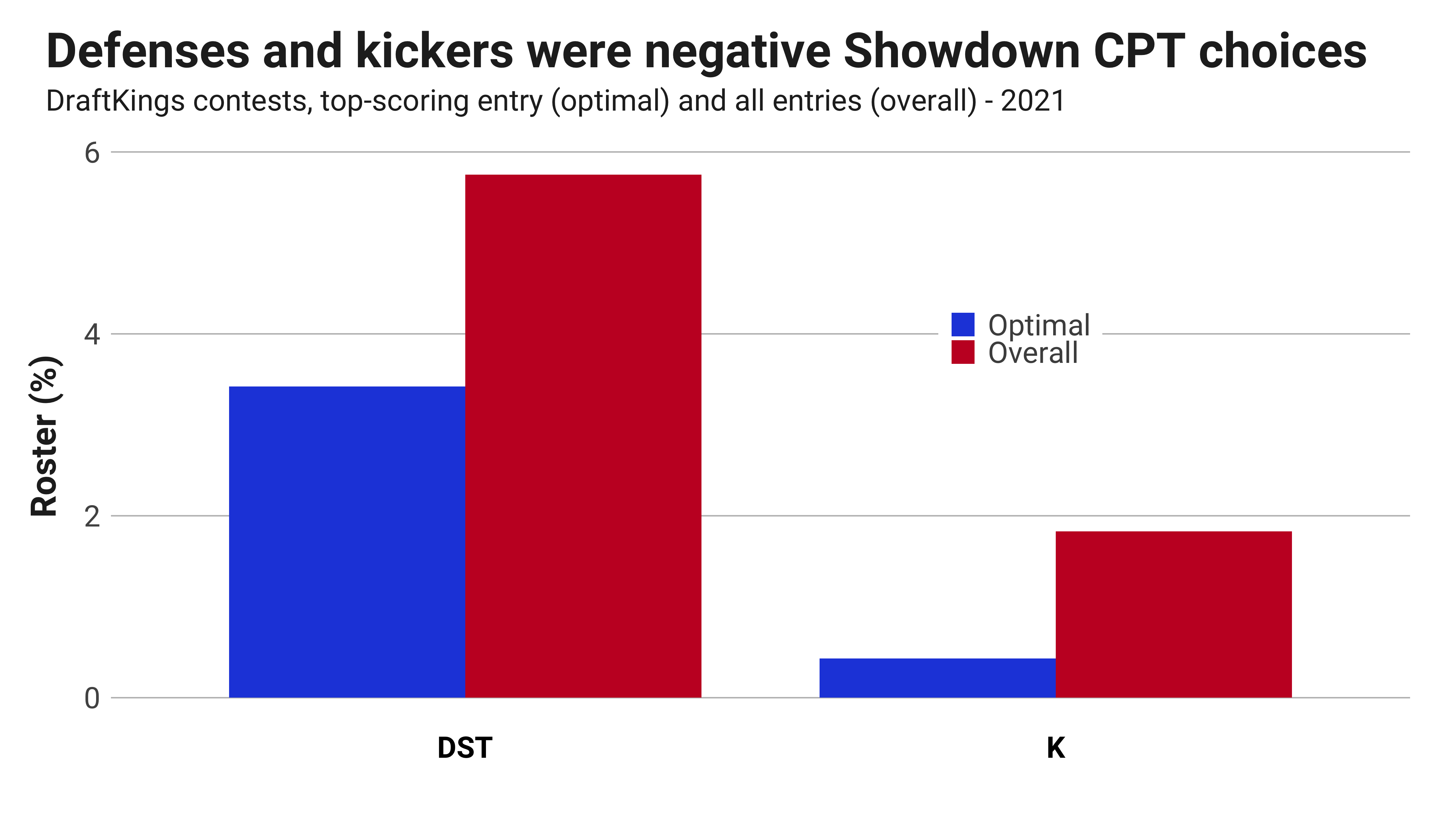 Defenses and kickers both were fairly good choices for the CPT slot in 2020 but fell out of favor in 2021 — mostly due to their rising popularity following a season of outlier defensive performances in 2020. Defenses were rostered in the CPT spot in nearly 6% of lineups in 2021 — up from only a little over 4% in 2020. There could be value again in 2022 if the market is off defenses but don’t expect outsized returns.

I broke the FLEX number from 2021 into two categories: rosters with two of the position (e.g. QB1) and those with only one. 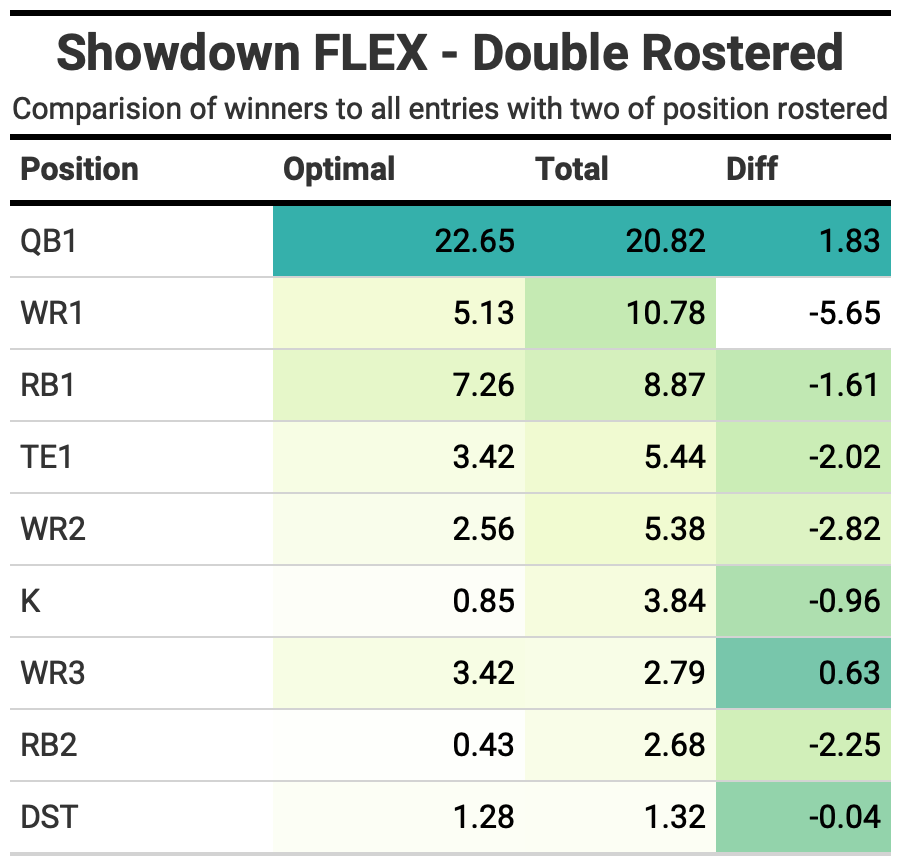 The biggest advantage in double FLEX ownership for showdown winners was with the QB1 position, which is a confirmation of what we found the last two seasons. The advantage was mitigated somewhat last year, but it’s the closest thing there is to a cheat code in showdown contests to roster both starting quarterbacks in the FLEX. It also prevents DFS gamers from placing one in the CPT spot, which we showed above is generally a negative expected value move. 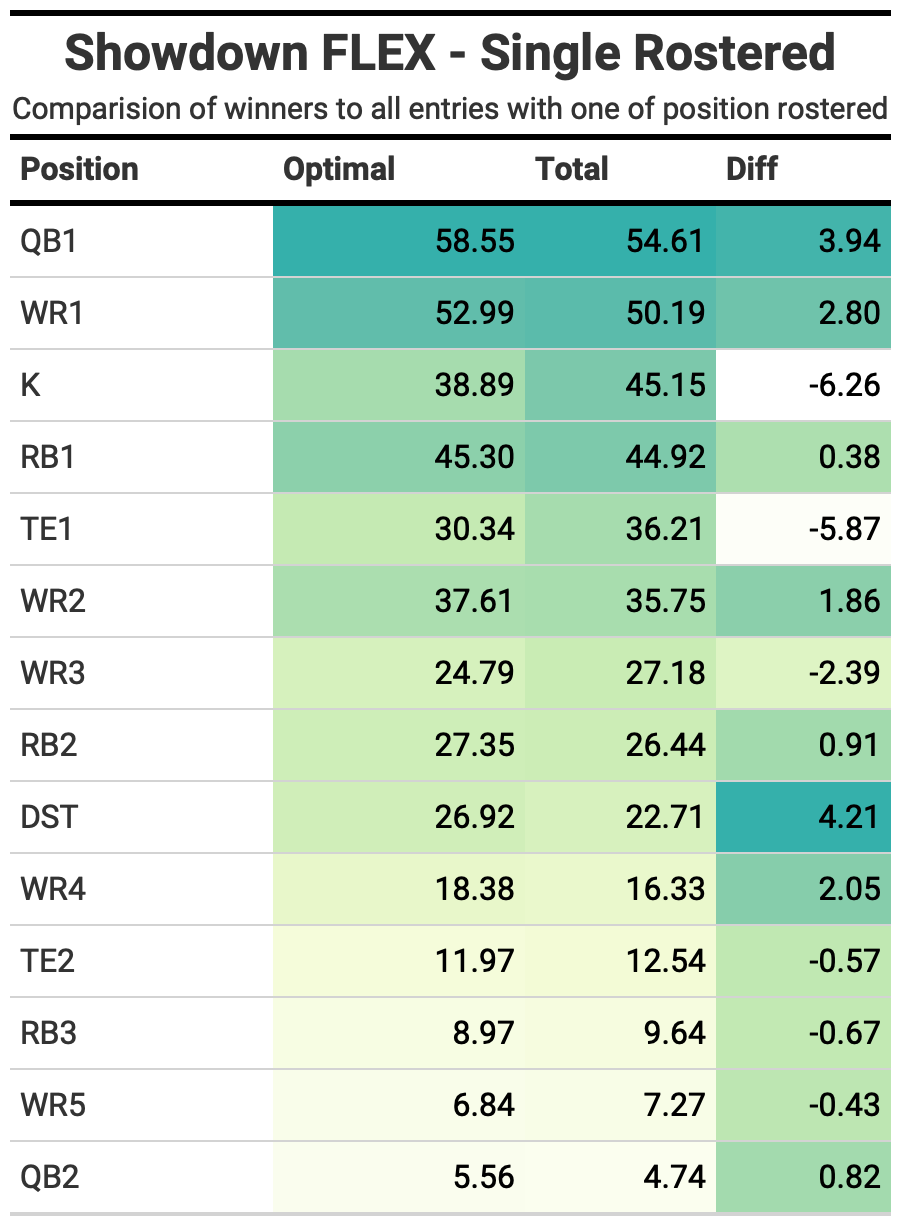 The numbers for single FLEX positional rosters are more muddled. Again, even using a single QB in one of the five FLEX spots provides leverage while the most successful move each of the last three seasons was rostering one DST. You don’t want to blindly roster a DST option in the FLEX every contest, but it will benefit DFS gamers more than not.