This article is long, so I’ll spare you a lengthy intro. Here’s everything need to know in order to dominate your Week 7 DFS tournaments and cash games.

The quarterback position is usually the toughest one to nail down each week, and this week might be the toughest it’s been all year. You’re really only looking at five quarterbacks this week, but all five are nearly equal in price, expectation, value, and upside.

Los Angeles/Atlanta has the highest over/under of the slate, and by a sizeable margin (3.5 points). Matt Ryan is just the seventh-most expensive quarterback on DraftKings but he ranks second in DraftKings fantasy points per game (this season and over the past two seasons). He’s reached the 300-yard bonus in all six games this year and has thrown three or more touchdowns four times. Jared Goff is even cheaper on both sites, even though Los Angeles has the highest implied point total on the slate (25.5). With a floundering and banged-up run game, he’ll get a dream matchup in what should be a pass-heavy, high-scoring shootout. Atlanta ranks bottom-three in fantasy points allowed per game, opposing passer rating, pressure rate, and fantasy points allowed per dropback to opposing quarterbacks. As an added bonus, for stackability, all four of his primary receivers are glaring values on DraftKings. 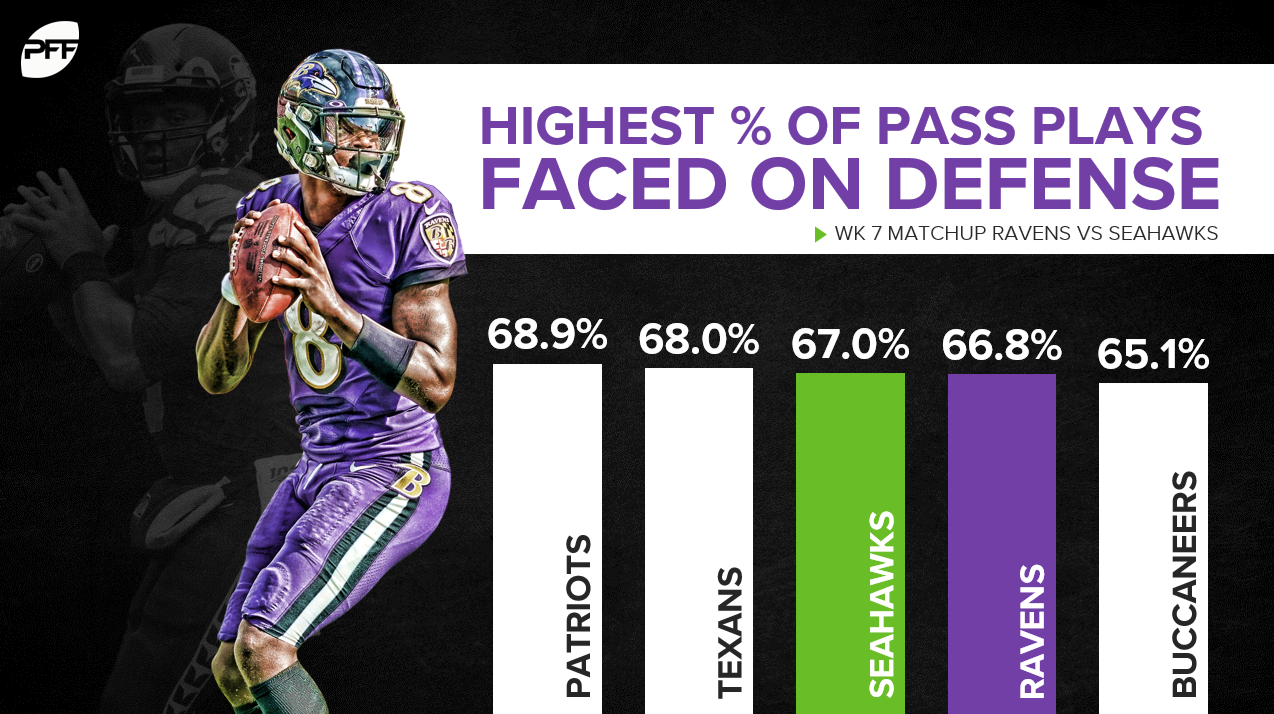 Baltimore/Seattle has the slate’s second-highest over/under, and features our two highest-scoring quarterbacks (in terms of fantasy points per game or fantasy points per dropback). The key to playing Russell Wilson is, you play him every time you think Seattle will be forced to lean pass-heavy. Baltimore is seeing a pass on 67% of their opponent’s plays, only tenths of a percent behind Seattle for third. It’s safe to assume Pete Carroll can’t afford to be conservative this week, against the league’s No. 2 offense. And the key to playing Lamar Jackson is, you just play him every week because, among Konami Code quarterbacks, he’s the “Chosen One.” It also doesn’t hurt that Seattle ranks bottom-10 in schedule adjusted fantasy points per game. Jackson has hit at least 33.0 DKFP in all three of his games against bottom-10 defenses this year.