Earlier this week, PFF Senior Analyst Steve Palazzolo released Mock Draft 2 for a midseason look at the NFL draft landscape. Though this mock is admittedly quite early in the draft process, there are still valuable takeaways to be had. Specifically, the inclusion of five defensive linemen in the top 10. If you need talent and depth up front, look no further than the 2019 NFL draft. PFF’s advanced metrics and player grades offer unique insight into what makes these five defenders worthy of a top 10 selection. 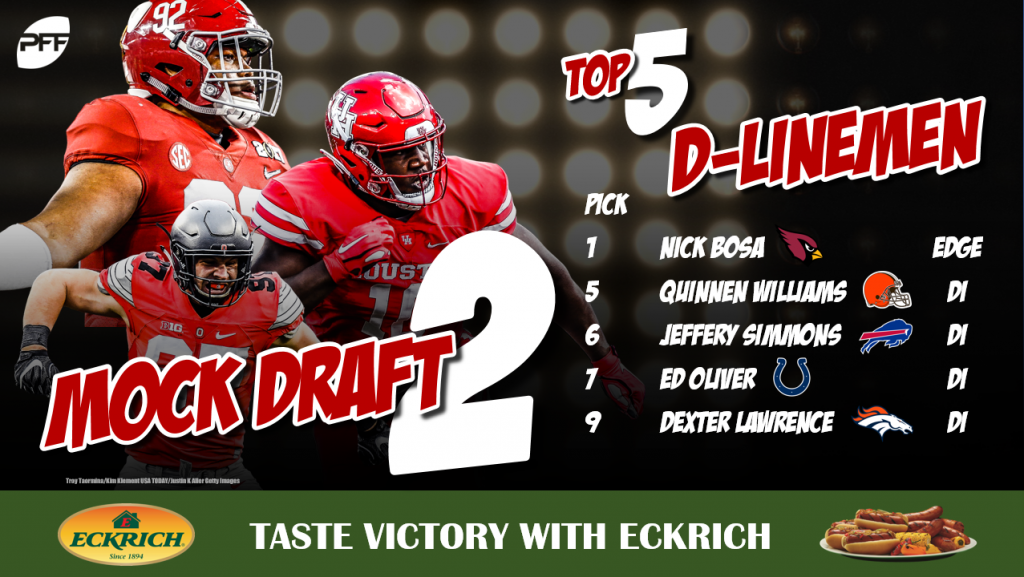 We currently have Nick Bosa as the best player available and did not ding his draft stock for the decision to leave Ohio State and focus on the draft process. Though Bosa has only played 113 defensive snaps this season, his 92.4 overall PFF grade still ranks second among all edge defenders and his 32.0% pass-rush win rate is first.

In 2017, Bosa was the nation’s premier edge defender (93.9 overall grade). He did damage as a pass-rusher from both the right side and left side, displaying his versatility along on the defensive line.

On a production basis, no defender has been better than Quinnen Williams this season (95.6 overall PFF grade, first). He has been otherworldly in run defense, stifling opposing rushing attacks with a 17.1% run stop percentage that ranks first among all players in the nation and is three full percentage points higher than the next closest defender.  If Williams keeps up this prolific play, he will go down as the best run defender PFF has seen since we started grading the college game in 2014. In the PFF era, no other defender has finished the season with a run defense grade above 96.0 or a run stop percentage above 17.0%.

Williams is no slouch as a pass-rusher, either. He has accumulated an 8.3 pass-rushing productivity that ranks fifth in the nation, and his 25 total quarterback pressures are good for sixth.

The importance of interior defenders that can produce pressure up the middle and stop the run cannot be understated – and Jeffrey Simmons fits the description perfectly. He broke out last season, recording a 90.8 overall grade, 41 total pressures, and 38 defensive stops. The 2018 season has been more of the same, where Simmons has an identical 90.8 overall grade that ranks fifth among his peers and produced an exemplary 91.8 run defense grade that's good for fourth. Simmons has also made an impressive 10 tackles for loss or no gain.

Simmons had his best game against an FBS opponent in Week 8 against LSU, recording an 89.8 overall grade. He recorded a massive 91.3 run defense grade to stymie LSU’s 28th-ranked rushing attack and hold stud running back Clyde Edwards-Helaire to a career-worst 59.1 overall grade.

There is not much more for Oliver to prove in the college game as he has been a force on the interior for three straight seasons, recording PFF grades of 88.0 in 2016, 91.4 in 2017, and a spectacular 93.4 in 2018. You will be hard pressed to find a better defender against the run, where Oliver has recorded PFF grades of 88.0, 91.4, and 93.4 each of the last three seasons. Heading into 2018, Oliver needed to improve upon his ability to rush the passer, and he's done just that by producing a pass-rush grade of 88.7, good for fourth among interior defenders.

With the pedigree of being the number two recruit in the nation out of high school, Lawrence has lived up to the hype in his time at Clemson. Lawrence is known for his interior pass-rush skills, while also being stout in run defense. While Lawrence’s 84.0 overall grade this season is more solid than spectacular, at times he demonstrates his limitless NFL upside. In Clemson’s most difficult game to date, a thrilling Week 2 victory over Texas A&M, Lawrence consistently wrecked the pocket to the tune of nine total pressures, the most among any FBS defender that week.