We’re back with PFF Mock Draft 2, a midseason look at the NFL and NFL draft landscape. It’s still very early in the draft process, but some of the new names from September’s first mock have lived up to the hype, while others have dropped off. As usual, the draft order is just an estimate based on win projections heading into Week 8 of the NFL season, and this is a mock based on what I would do, not a prediction of what your favorite team will do.

The Cardinals take the best player in the draft and Bosa instantly upgrades their pass-rush after grading at an elite 90.0-plus in his two-plus years of college.

After taking Saquon Barkley instead of a quarterback a year ago, the Giants get a chance for redemption by taking Herbert. There’s still room to grow in Herbert’s development but he has the accuracy, velocity and athleticism to carry his strong college production to the NFL.

Williams has played below his high expectations this season, but he has all of the necessary tools to develop into a press man corner and he’s allowed a passer rating of 40.1 into his coverage this season.

It’s a great draft to revamp a weak defense and it starts with Baker, the top-graded corner in the nation at 91.4 overall to go with a passer rating of only 31.3 into his coverage.

The Browns still have work to do along the defensive front and Williams has emerged as the nation’s top-graded defensive player at any position with his 95.6 overall grade.

A necessary interior disruptor for the Bills, Simmons is excellent in the run game and one of the draft’s best interior pass-rushers, as evidenced by his 90.8 overall grade this season.

The Colts are still looking for defensive playmakers and Oliver can disrupt from the interior, though he’s still not as polished as a pass-rusher as you’d like to see from an undersized lineman.

The Jets grab the top offensive tackle in the draft in Williams who has the nation’ best overall grade at 89.3 while allowing only four pressures on the season.

Few interior defensive linemen can stop the run and push the pocket quite like Lawrence and he has three straight years in which he’s graded between 84.0 and 90.0 in the PFF system.

The wide receiver class is wide open, but Arcega-Whiteside may have the best combination of body control and ball skills as he’s earned a passer rating of 138.7 when targeted this season. 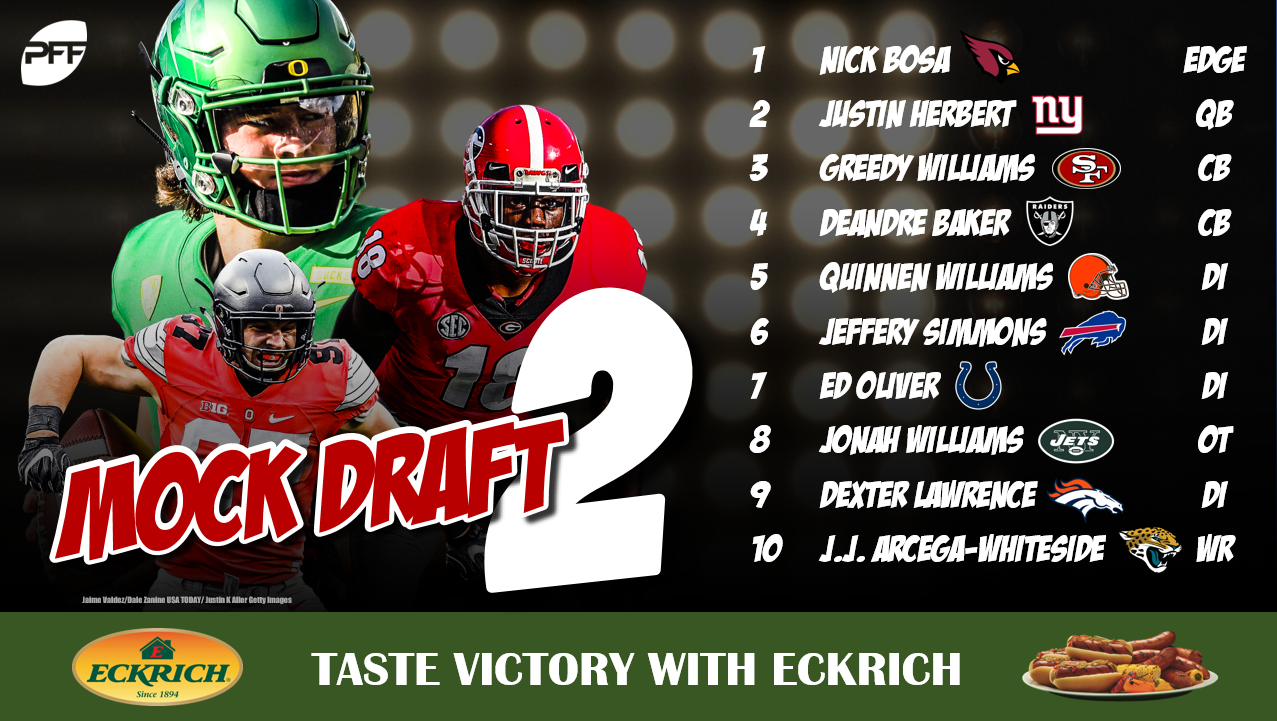 Another defensive playmaker for the Raiders, Thompson is a do-it-all safety who can play center field, in the box or in the slot, all leading to the top grade among safeties at 92.0 overall.

The Bucs upgrade at tackle where Risner has put together an outstanding four-year career and he currently has the No. 5 overall grade among tackles at 85.5 while his 91.9 pass-blocking grade ranks second.

Another big-bodied receiver with contested catch skills, Harry adds an outside weapon for the Titans’ offense and he’s averaged 6.1 YAC per reception this season.

The defensive trifecta is completed by adding Burns, who currently leads the nation with 51 total pressures and adds a much-needed athletic edge defender to Oakland’s front-seven.

With Golden Tate in a contract year, Brown takes his slot skills to Detroit where he can create after the catch (6.0 YAC per reception) or down the field.

The second quarterback comes off the board in Haskins, who still has some work to do, especially after rough games on the road, but the Dolphins need to take a chance as they look to replace Ryan Tannehill. Haskins has graded at 91.2 from a clean pocket, but only 38.3 on his 67 pressured dropbacks.

Jones is a disruptor on the interior, ranking third among interior defensive linemen at 92.3 overall to go with 23 pressures on the season.

One of the best stories of the season, Allen has been outstanding for Kentucky, topping all edge defenders with a 92.8 overall grade. He has 41 total pressures and his ability to drop into coverage gives him great versatility in defensive coordinator Mike Pettine’s scheme.

Murphy moves well and he has the ball skills to immediately upgrade Philadelphia’s secondary as he has 12 pass breakups this season, fifth in the nation.

White is an excellent athlete and he’s done a much better job of harnessing his ability this season, leading to an 84.2 overall grade and 17 pressures as a blitzer. He’ll add much-needed athleticism to the middle of the Cincinnati defense.

Houston’s needs an influx of talent at corner and Oruwariye adds a big body at 6-foot-1 as he’s graded at 80.0-plus over the last two years. The cornerback class is wide open at this point but Oruwariye should be in the conversation come April. 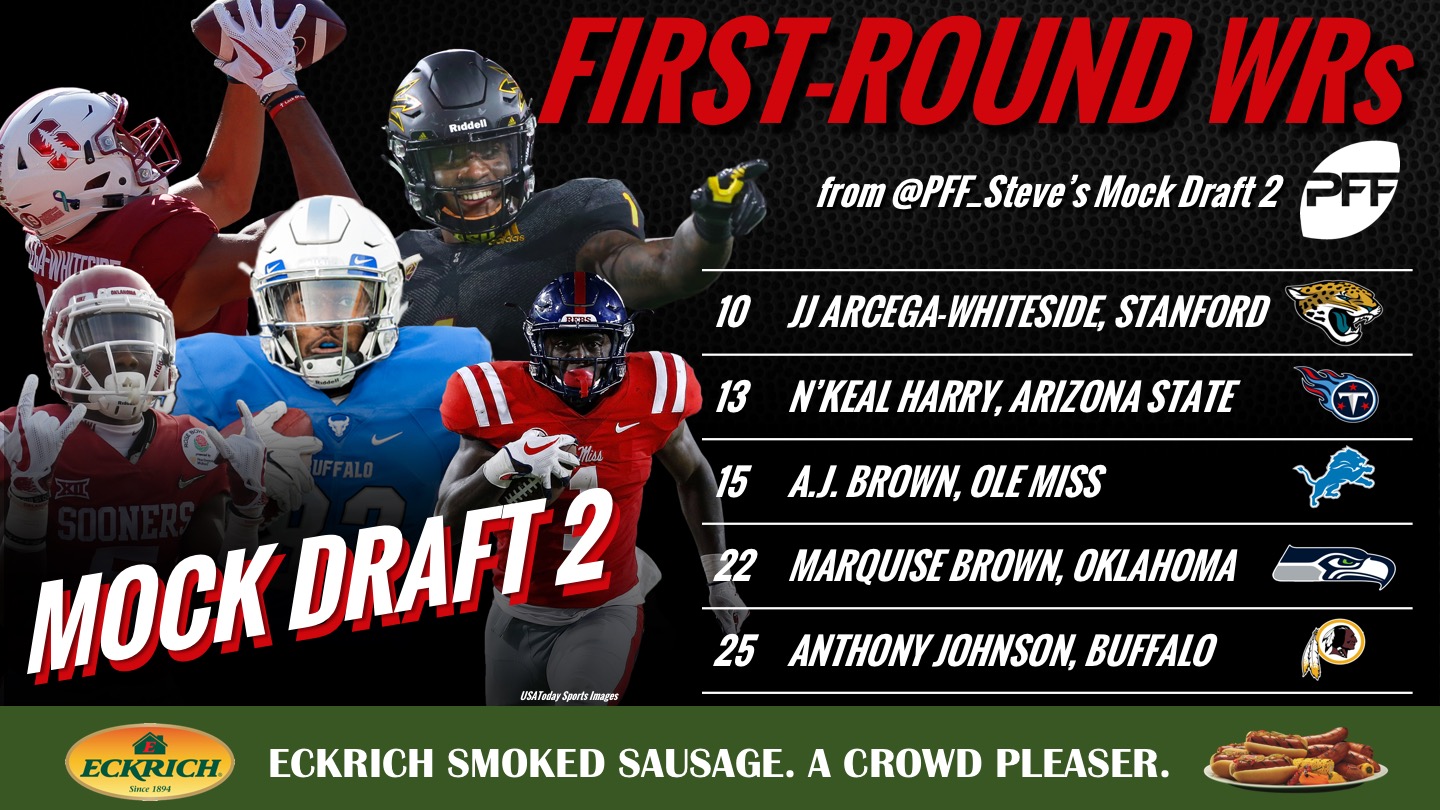 Brown is as explosive as any receiver in the draft as he’s averaged 18.5 yards per reception while catching 76.9% of his targets this season. He adds a downfield threat for Russell Wilson.

Polite has broken out to post the No. 3 pass-rush grade among edge defenders this season at 90.3, and he adds another option as the Ravens look to upgrade their pass-rush off the edge.

With 27 pressures on 246 rushes, Tillery’s 91.4 pass-rush grade leads all interior defensive linemen and he adds much-needed youth up front for the Panthers.

Washington has work to do on the outside and Johnson has a good combination of route running and contested catch ability, all leading to an 81.0 overall grade and 18.1 yards per reception this season.

While the Steelers would love to go defense here, Fant adds another explosive playmaker to the Pittsburgh passing attack as he can stretch the seam and create mismatches in the middle of the field.

The Vikings have work to do along the offensive line and Little continues to improve as his 90.2 pass-blocking grade ranks seventh in the nation among offensive tackles.

Biadasz can play multiple positions on the interior and he’s an excellent all-around center, grading at 80.9 overall this season.

The Packers go defense again, this time with Coney who is a hammer against the run and has improved greatly in coverage, ranking third in the nation at 90.8. In coverage, he's allowing only 43% of passes thrown into his coverage to be completed.

Sternberger has broken out to post the nation’s top receiving grade among tight ends at 89.7 while picking up 8.3 yards after the catch per reception. He adds ‘Gronk insurance' and two tight end versatility to the New England offense.

Defensive playmakers are needed in the Kansas City secondary, and Rapp has the ability to cover tight ends, slot receivers or running backs, all leading to an 89.1 coverage grade, good for seventh in the nation this season.

The Rams still lack elite playmakers on the edge, and Sweat has developed nicely, picking up 27 pressures on only 174 rushes this season.