It may have been cupcake week, but there were plenty of consequential prospect performances to dive into. We’ll dive into those as well as the developing postseason bowl rosters in this week’s edition of scouting notes.

These are the games that should terrify any evaluator about Herbert’s game. Herbert went 19-of-35 in a performance that included six(!) turnover-worthy plays. Of those 19 completions, only 10 traveled past the line of scrimmage. While he certainly doesn’t have the receiving talent of an LSU or Alabama, he’s still struggling to discern which situations are worthwhile pulling the trigger on down the football field. That’s something that will only get more difficult when he gets to the NFL and games like this past weekend are why he’s not in our top-five conversation.

While we’ve been keeping tabs on the growing Senior Bowl roster in recent weeks, the East-West Shrine Game has been rolling out their accepted invites, as well. Usually, an accepted Shrine Game invite means the player wasn’t getting the call to head to the Senior Bowl. The three players below made PFF’s latest top-100, and we would have loved to see all compete in Mobile.

This one was by far the most surprising, as Johnson is in the midst of his second straight 1,000-yard season for the Golden Gophers. While he’s had inconsistent hands over the course of his career, his drop rate has finally dipped below 10% this season (six drops on 73 catchable). He’s a superb route runner with excellent shake to get off press coverage. As the 31st player on our updated draft board, this is a head-scratcher. 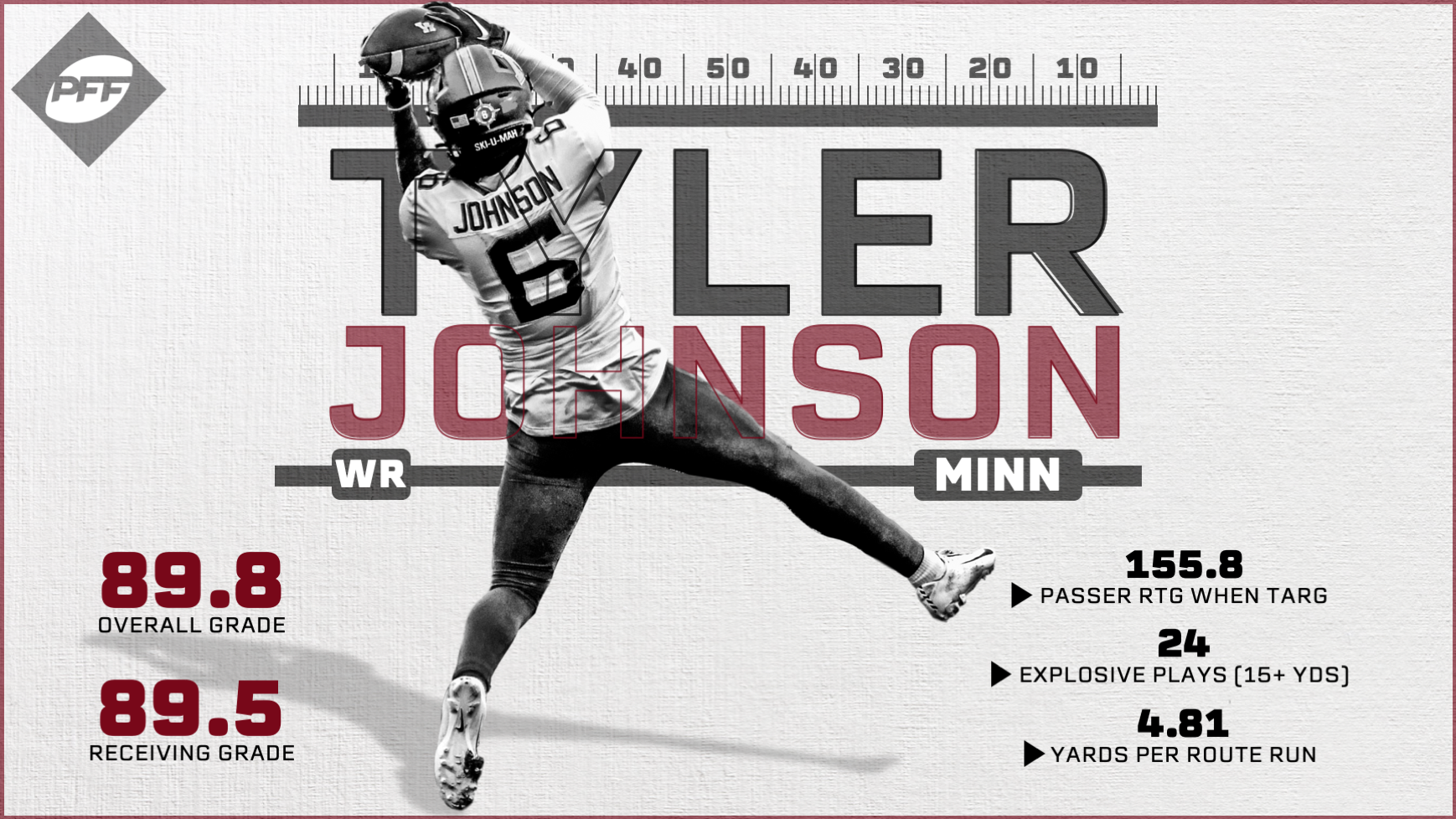 While Auburn left tackle Prince Tega Wanogho got the invite, it was Driscoll who checked in higher on PFF’s latest draft board (86th vs. 96th). It’s also been Driscoll who has graded out higher this season with an 85.8 pass-blocking grade and only eight pressures allowed.

Highsmith checked in at 98th on PFF’s latest draft board, so it’s not that egregious of an oversight. Still, the improvement Highsmith has made in four years since walking onto Charlotte’s football has us intrigued. He went from a 60.9 pass-rushing grade in 2016 to 71.2 in 2017 to 75.6 last year to 91.4 this season.

All Bryant does for the Owls is move chains. He’s now done so 43 times on his 58 catches, and he's added three scores to boot. This past week he hauled in 10-11 targets for 182 yards against UTSA to bring his total to a position-leading 890 yards on the year. Bryant is undersized at 6-5, 240 pounds and not overly athletic despite his stature. Still, he’s got legit receiving and YAC ability with 11 broken tackles this year.

Michigan has a receiving corps chocked full of draftable talent, and for us here at PFF, Collins sits atop that group. This past week, he hauled in 6-7 targets—including 3-3 contested—for 165 yards and three scores. The one ‘no catch’ was a filthy stop-and-go that fooled a cover-2 safety and would have been a 51-yard score if not for a Shea Patterson overthrow. His combination of size, speed and ball skills is very intriguing at the next level.

This time it's Nico Collins with the TD reception: pic.twitter.com/BEbUjsk52o

Yes, it was against Western Carolina, but one can still make impressive plays even against a cupcake. He picked off two passes on the day, and while one was a tip, the other showed impressive ball skills. He was asked to split two vertical routes and located the ball after a full turn over his should for the pick. The junior is now in the midst of his second straight season with an 80.0-plus coverage grade.

Xavier McKinney having himself a game

The Senior Bowl invitee has been stuffing the stat sheet for Wyoming this season. He’s earned a 91.2 overall grade for the season, with 44 stops and only 10 missed tackles on 98 attempts. This past week against Colorado State, he earned a career-high 91.6 overall grade with a pick and five stops. At 6-2, 250 pounds, Wilson is a bit of a throwback with his ability to stack and shed between the tackles. But don’t let that fool you, he’s still smooth in coverage with nine combined picks and pass breakups this season.

The Bearcats eeked out a win over Temple, but they could have won more comfortably if not for a would-be touchdown that clanged off Degura’s hands on a post route late in the first quarter. It was the first game that Degura finished without a catch all season.

After earning a 90.2 coverage grade last season, it’s not been a banner senior season for Vildor. He had a serious missed tackle problem heading into this past week, with 10 misses on 26 attempts. Against Arkansas State, though, he got torched in coverage, allowing receptions on 7-of-10 targets for 104 yards. He’ll be at the Senior Bowl to try and revive his draft stock.

Ehlinger’s junior season has shown marked improvement in some regards (downfield passing), but his biggest concern remains — his lack of pocket presence. Against Baylor, Ehlinger took five sacks and scrambled eight times on 50 dropbacks. He’s now taken 30 sacks on the season after taking 31 last year. This is all with a fairly quality offensive line in front of him by college standards. The pockets will only get tighter at the next level, and it’s a problem that we need to see fixed before he gets there.

We make another exception for a freshman that has been playing well beyond his years. Like Derwin James and Isaiah Simmons before him, Hamilton looks like the new breed of coverage defender who defies positional designation at 6-4, 210 pounds. He’s proven capable of doing anything Notre Dame has asked him to do in coverage on the back end. This past week against Boston College, Hamilton had a pick and a pass breakup on three targets. On the season, he’s allowed only four catches from 17 targets for 34 yards; he's picked off four passes and broken up four others. His 89.9 coverage grade ranks fourth nationally. Those are ridiculous figures for a true freshman. He’s going to be a special prospect in a couple of years.

On 3rd-and-16, Dennis Grosel fires a pass toward the middle of the field. It was intended for Hunter Long, but it never got there.

Instead, Kyle Hamilton, who Grosel didn't see, picks off the pass. Hamilton has 4 INTs this year as a true freshman. pic.twitter.com/8t0G2a3uT1