With the 2022 NFL Draft less than one month away, the time has come to take our annual look back at how all 32 NFL teams have allocated their past draft capital and how successful they have been at drafting each position.

As explained here, we assign a value to each pick by projecting how much PFF WAR a player picked at that spot is expected to generate.

We can talk about draft capital using these values, as each pick is assigned a number that can be interpreted as the draft capital added by this pick. For each team, we can add up the total draft capital spent in the last six drafts and see how much of it was allocated to each position.

Most teams focus on defense 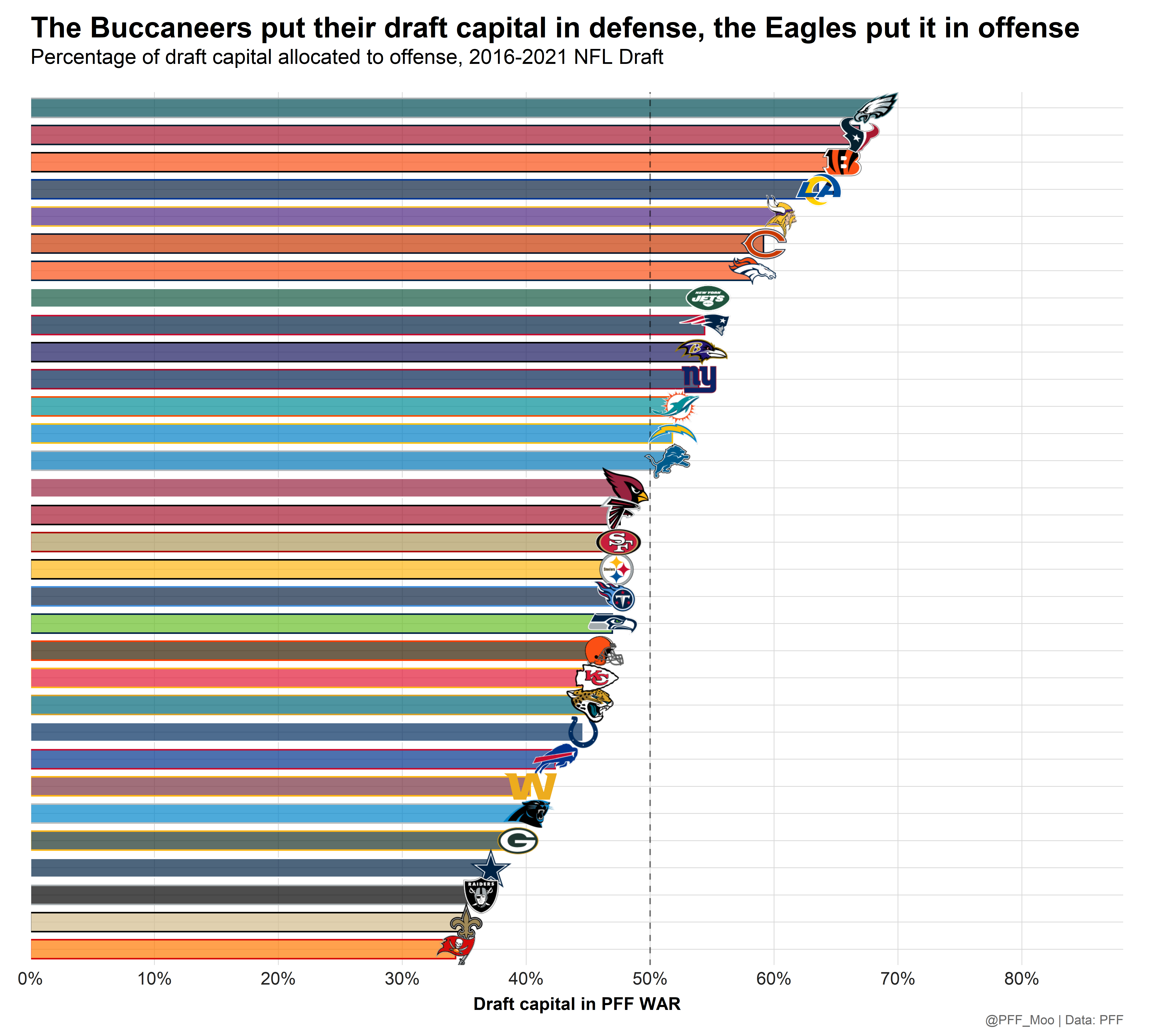 We can take the analysis one step further and look at the positions teams have drafted. The following chart shows how much capital each team has allocated to each position. For the sake of simplicity, we will look at only offensive and defensive positions and ignore special teams.

We start with offense: 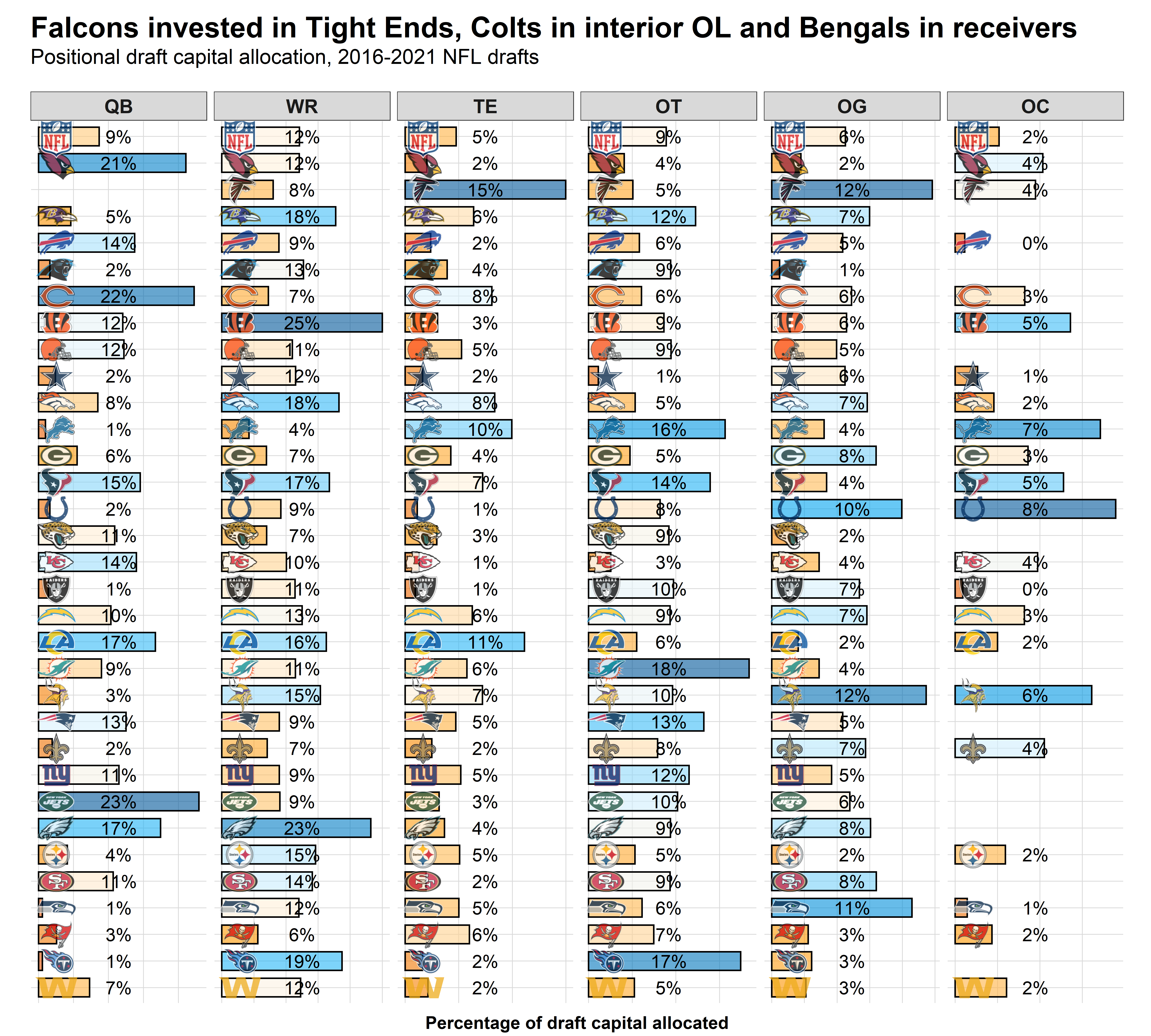 Here are the defensive positions, along with running backs: 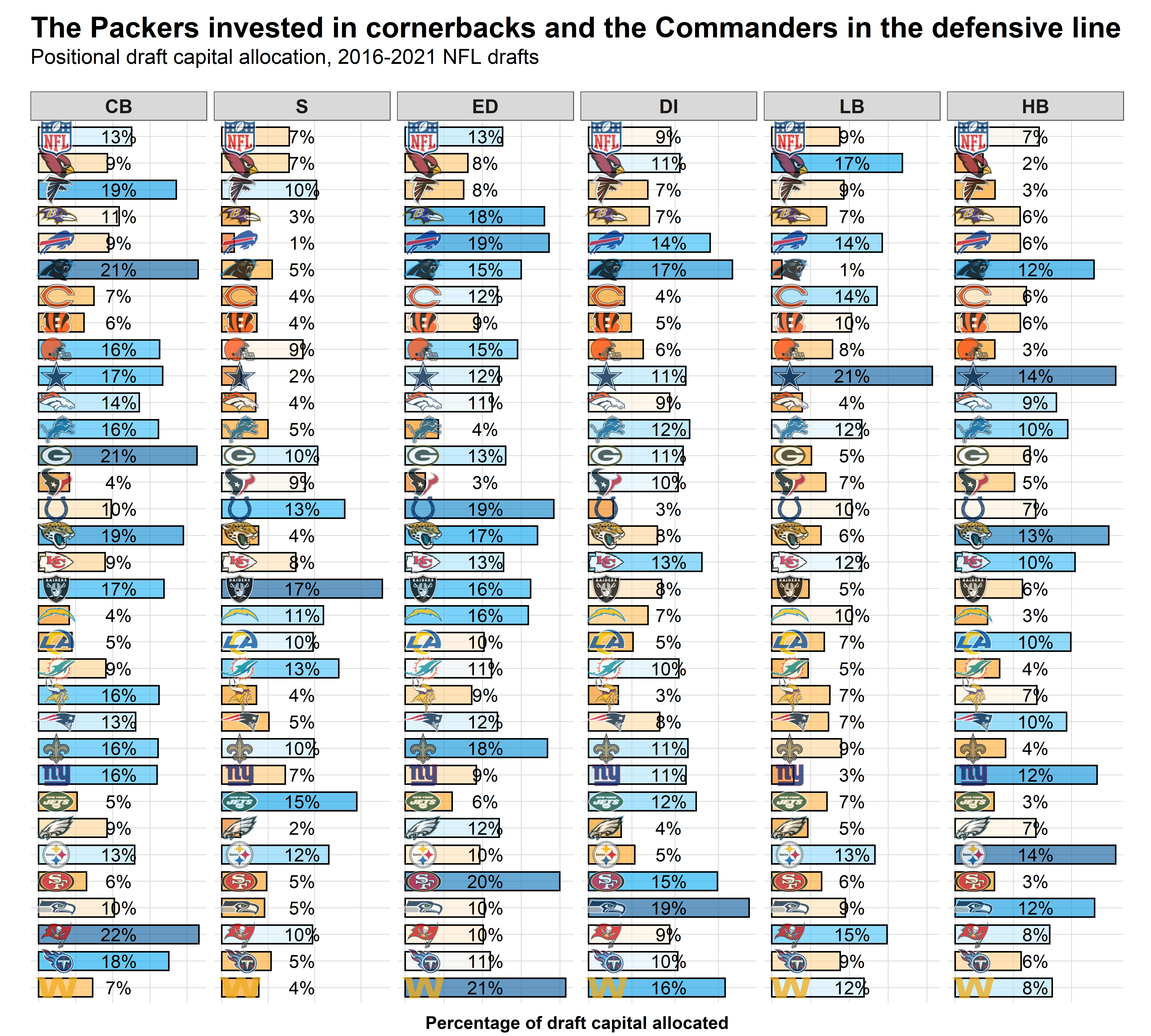 Draft success for each position

When it comes to success at each draft position, there are a few things to consider: We often praise or fault general managers — and by extension, the scouting department — for draft outcomes, but it’s noteworthy that talent and character evaluation is only a part of draft success. Development also plays a huge role, and that’s mostly the coaching staff's job. When looking at a single position, a very good or very bad result can be driven more by a position coach than by the evaluation process of the scouting department.

Additionally, the samples of a single position are fairly small. To get a reasonable combination of sample size and recency, we consider the drafts from 2014 through 2021 using the same method we’ve used before to evaluate the success of draft picks. 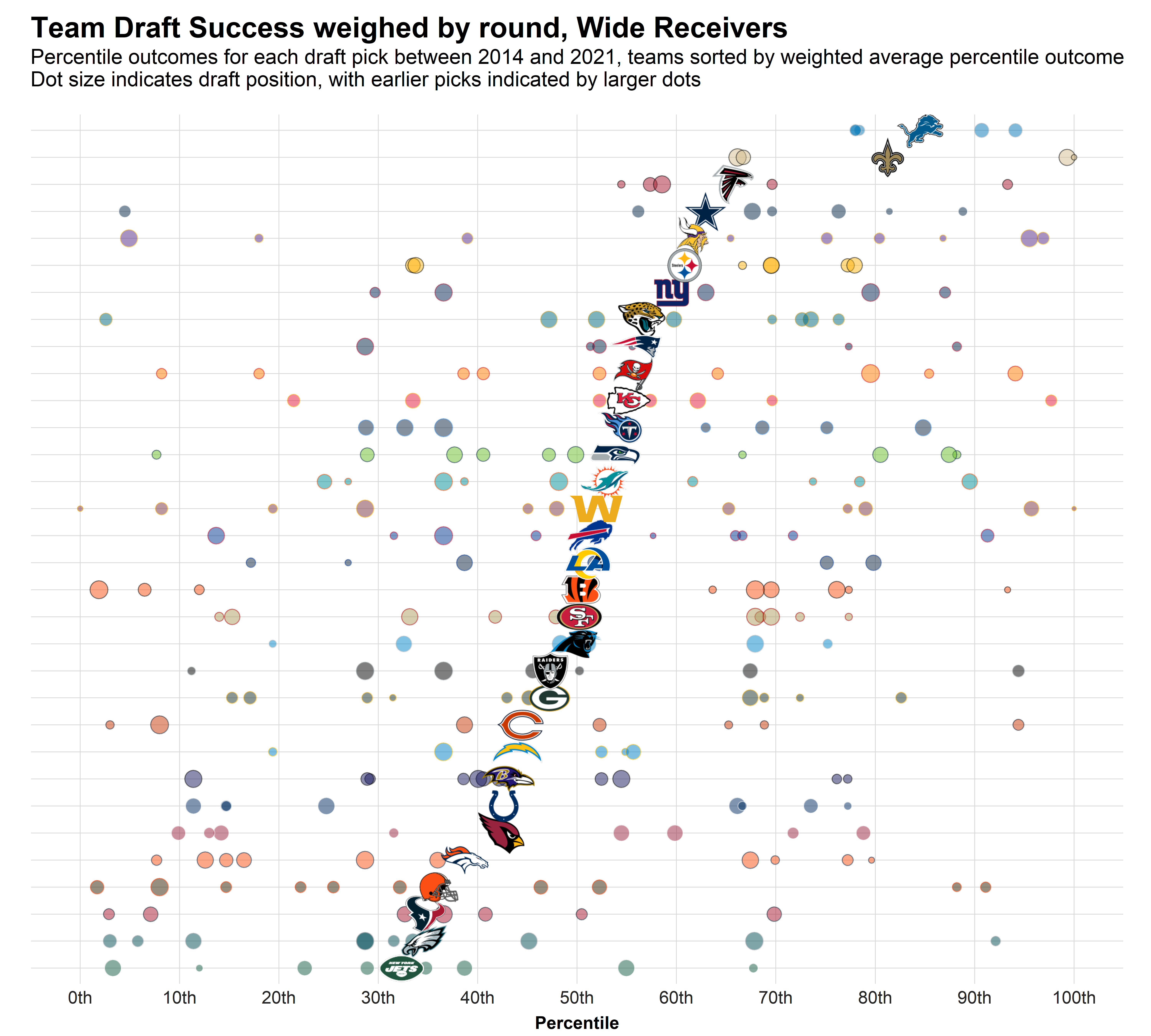 Given their success drafting wide receivers, the Detroit Lions probably should have taken more shots at this position, as they rank last in draft capital allocated to the receiver position but rank first in draft success.

Kenny Golladay and Amon-Ra St. Brown have performed well as third- and fourth-rounders, respectively. Late picks T.J. Jones, Travis Fulgham and Quintez Cephus have also generated more value than most picks taken in the sixth round or later.

On the flip side, the New York Jets haven’t had much luck at wide receiver. Of course, the question there is whether this is the cause or result of the fact that they also haven’t found a capable franchise quarterback. The answer is most likely that these two things are interconnected. 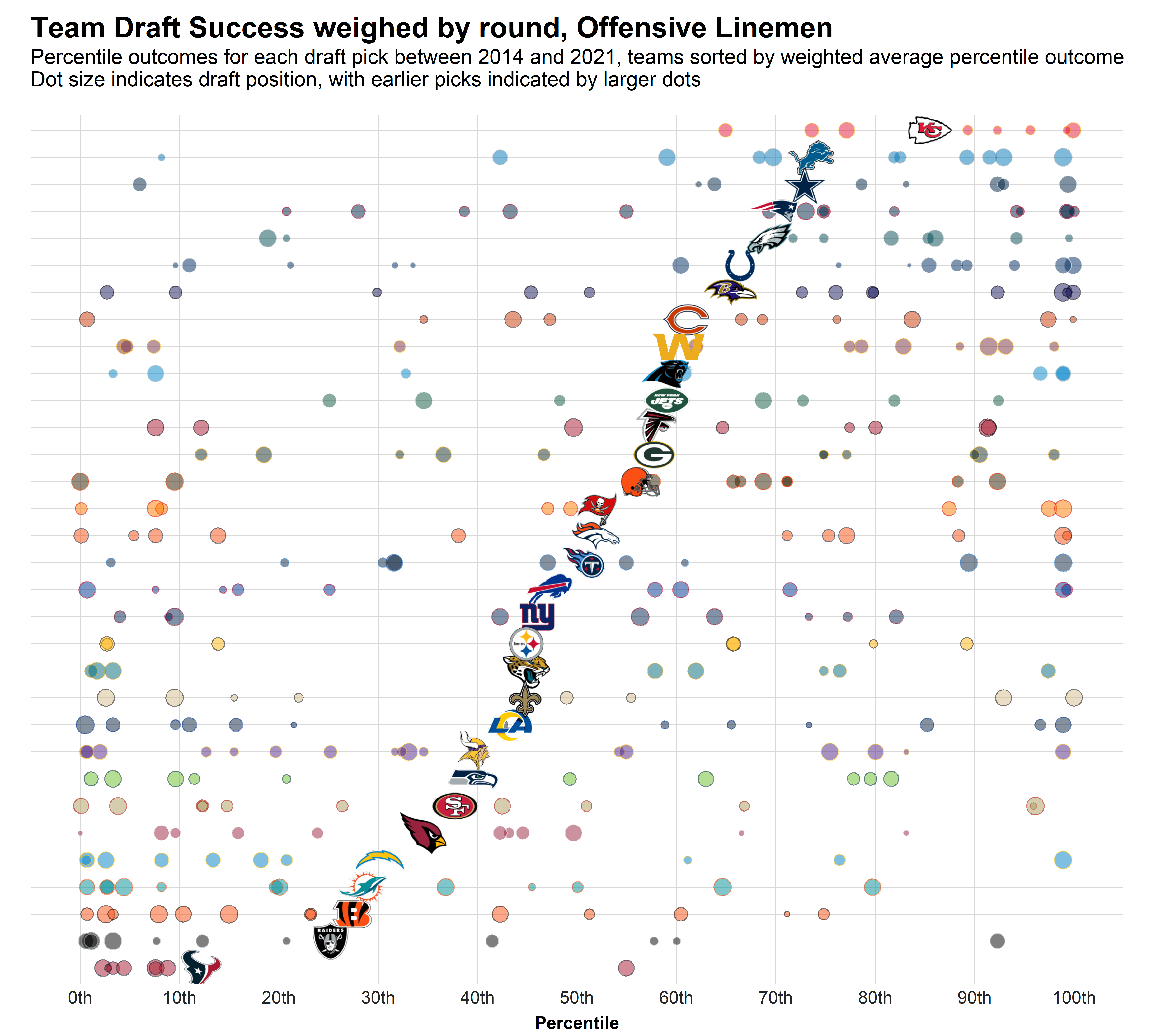 Ironically, the league's best team at drafting offensive linemen in recent years has lost a Super Bowl due to a (temporary) weakness at offensive line. 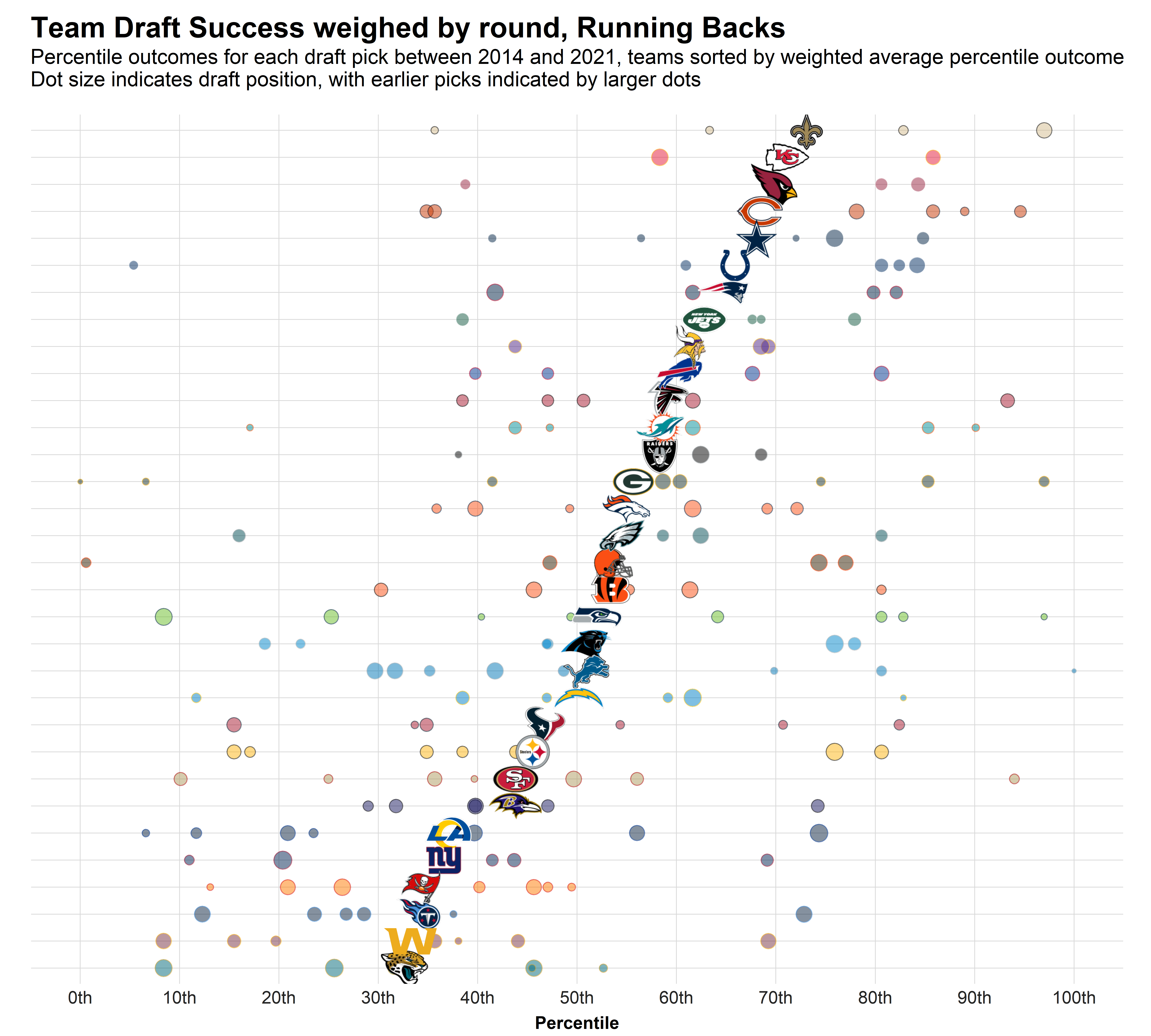 The sample size for running backs isn’t very large, but the New Orleans Saints and Arizona Cardinals probably have the best approach, as they don’t invest a lot of draft capital in the running back position and consequently give their few picks more opportunities to generate value.