The comps below were derived from a two-step process. First, I converted all the most statistically relevant stats and measurables to percentiles based on the thousands of prospects who have entered the NFL since 2006 at each position. Then, I filtered the total universe of past prospects by those who had draft positions, weight and 40 times within a 10th percentile in either direction of Kenneth Gainwell. For undrafted players, I assigned a numerical draft position of 300.

For Gainwell's draft position, I’m using an estimate based on the mock data collected at GrindingTheMocks.com. For weight and 40 time, I’m using the numbers from his pro day, with a 0.03-second penalty added to the 40 time to reflect the uncertainty of pro-day timed measurements.

I could only piece together measurables from Gainwell’s pro day for this analysis. The only consistent numbers I saw across social media were a weight of 201 pounds and a 40-yard dash time of 4.42 seconds. I didn’t see numbers for other drills, though the things outside of weight and speed aren’t part of the matching algorithm.

Gainwell displayed top-notch speed at the collegiate level, and he was able to erase angles against weaker competition.

The concern for Gainwell’s transition to the NFL was primarily size and whether he could hold up with a bigger workload. By weighing in at 201 pounds, Gainwell mitigated some of those concerns, but his size makes it difficult to match him with NFL workhorses. 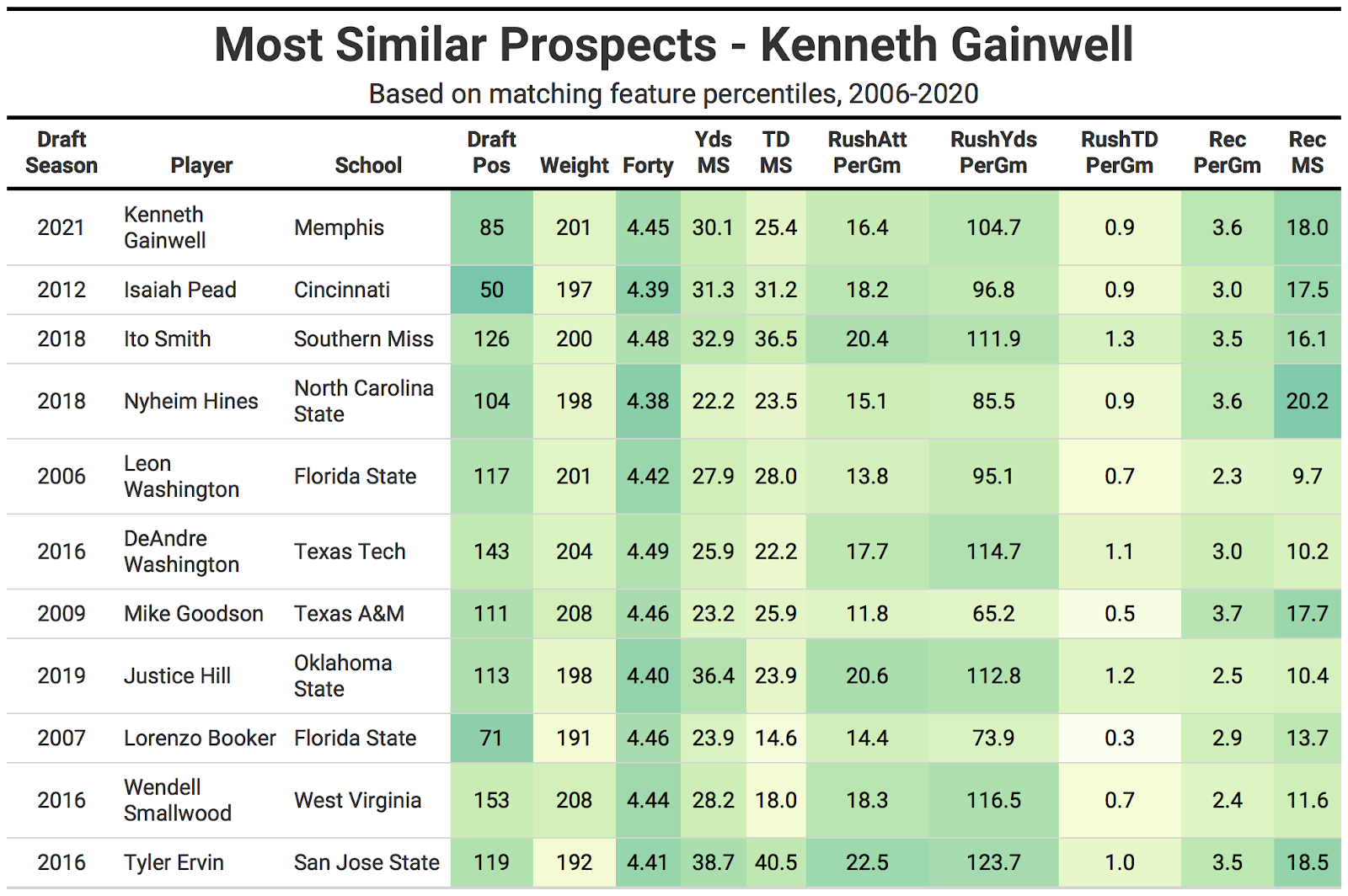 Gainwell accumulated more than 2,000 scrimmage yards in 2019 before opting out of the 2020 season. While that sounds impressive, the combination of his relatively low rushing attempts per game match with productive college backs who transitioned into specialized roles in the NFL.

Gainwell was also part of a dynamic offense overall, which lowers his share of team yards and team touchdowns. A troubling sign for Gainwell is that he matches mostly with previous draft prospects who were taken later than his expected draft position.

The Memphis back was an extremely productive receiver, averaging 3.6 receptions per game and accounting for 18% of team receptions in 2019. At the very least, Gainwell is positioned well for a third-down role in the NFL.