Sorry, SEC, the Big Ten has the nation's best receivers

[As a part of our partnership with ESPN, this story was originally published on ESPN+ and can be viewed in its entirety here with your ESPN+ subscription – Sorry, SEC, the Big Ten has the nation's best receivers]

There's a star-studded cast of receivers returning to college football this season, including perhaps the most loaded draft class at the position in recent memory. Some of the top-tier names belong to the nation's powerhouse teams in Clemson and Alabama, but it's actually the Big Ten that returns the most talented group of pass-catchers in the nation.

The rundown of the top returning B1G receivers is a varietal who's who of standouts for each team. 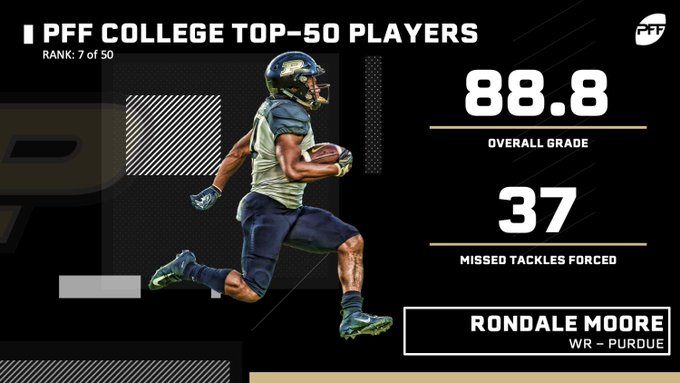 Standing out among them is Moore who exploded onto the scene as a true freshman in 2018. Moore forced nine more missed tackles than any other receiver in the country and gained a ridiculous 892 yards after the catch. He turned 154 targeted passes into 114 receptions for 1,258 yards and a combined 56 first-down and touchdown receptions despite an average depth of target of just 6.0 yards past the line of scrimmage.

Moore is as shifty as they come and stronger than defenses may expect from his small frame. All signs point to an incredibly bright future for him at Purdue.

On the other end of the spectrum, Johnson returns as the nation's highest-graded receiver in the red zone and on money downs (third and fourth down). Johnson averaged 3.35 yards per route run a year ago and since 2017, he has more explosive plays of 15 or more yards than any other receiver in the country. It doesn't matter who's throwing him the ball, Johnson just converts and his 91 receptions for a first down or touchdown in that span also pace the country.

Johnson makes contested catches look easy just as he does ripping off chunk plays, averaging 15.0 yards per catch a season ago.

Nebraska's down year a season ago may not have shed as much light on just how good Spielman is across the field, but since 2017, he holds the country's seventh-highest receiving grade. In that span, he has forced 25 missed tackles (sixth), brought down 14 contested catches (27th), 78 receiving conversions (eighth), 868 yards after the catch (seventh) and dropped just 7 of the 128 catchable passes thrown his way. With another year of Adrian Martinez and Scott Frost's system, he very well may see all of those rankings increase before the season is over. 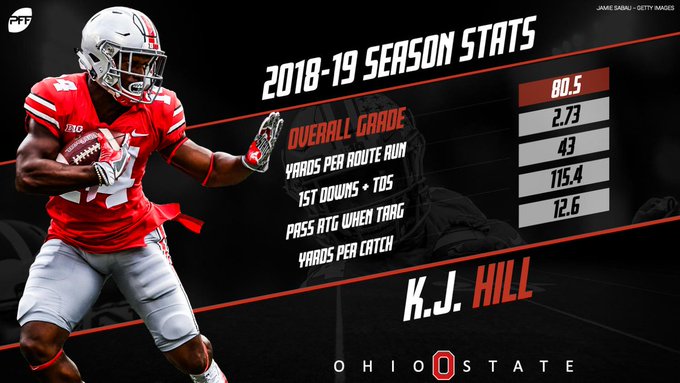 Similar to the aforementioned Moore, Hill is a true threat with the ball in his hands after the catch. He routinely took Dwayne Haskins' passes the distance, doing the majority of his damage after the catch in the Buckeyes' short-area passing attack last season. He's an incredibly shifty receiver with great balance who must be schemed around by opposing defensive coordinators. In his career, Hill has forced 23 missed tackles, seen his average yards after the catch per reception grow by a full yard in each of the past three seasons and dropped just seven of his 151 career catchable targets. New quarterback Justin Fields has a reliable home-run threat to feed the ball to early in his OSU career.

A 5-star pedigree follows Peoples-Jones everywhere he goes, and by some standards, those lofty expectations were always going to be hard to live up to. Nevertheless, DPJ put forth a very strong sophomore season and is primed to break out in Year 3 in Ann Arbor. Given new offensive coordinator Josh Gattis' track record with receivers, Peoples-Jones should be able to use his big frame and great speed to be on the receiving end of more Shea Patterson passes than 2018. Coming into his own last year, he was a do-it-all receiver, forcing 7 missed tackles, gaining 245 yards after the catch and dropping just 1 of the 48 catchable passes thrown his way, all pivotal aspects in a Gattis-led offense.

Continuing the trend of reliable hands for the Wolverines, Nico Collins leads all returning Big Ten receivers with 38 receptions without a drop from a season ago. Collins can go up and get any ball thrown his way and is no stranger to converting when called upon. Of his 38 receptions last year, 23 of them scored a touchdown or moved the chains for a first down, while his 16.7 yards per reception in 2018 is second among qualified returning receivers. 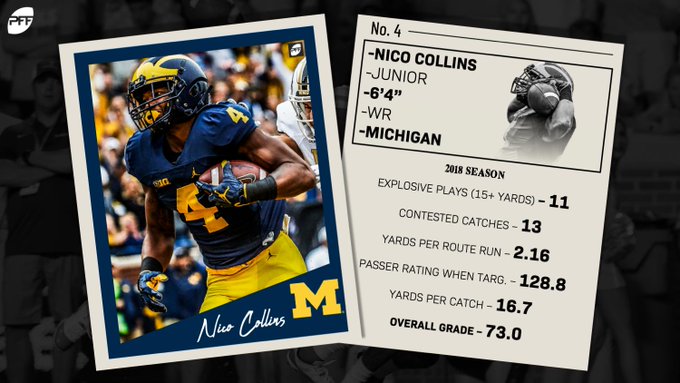 Any list of top receivers in the Big Ten would be remiss without Hamler's name on it as he should become a household name for those outside State College by year's end with Sean Clifford slinging him the ball. Hamler averaged 8.6 yards after the catch per reception a year ago and converted a first down or touchdown on nearly 74% of his catches.

Austin Mack, Ohio State: Caught 61.9% of his targets and averaged 12.7 yards per reception in eight games.

Whop Philyor, Indiana: If he can return from an injury healthy, he's a threat with the ball in his hands with several IU freshman records to his name.

Rashod Bateman, Minnesota: With Johnson receiving all the hype, Bateman could quietly see a lot of soft coverage and explode after grabbing 51 passes for 704 yards and 10 missed tackles forced last year.

Cody White, Michigan State: Cut down on the drops and White becomes a viable No. 1 receiver for Brian Lewerkeor Rocky Lombardi in East Lansing.

The conference has pushed out tight end talent after tight end talent in recent years and while 2019 may be a down year on paper, look for Ferguson to potentially become one of the next talents to come out of the TE factory that is the Big Ten. In a dominant freshman season, Ferguson hauled in 66.7% of passes thrown his way, converted a first down on nearly 64% of his receptions and averaged 12.7 yards a catch. He'll be a reliable target over the middle for Jack Coan or Graham Mertz all season. 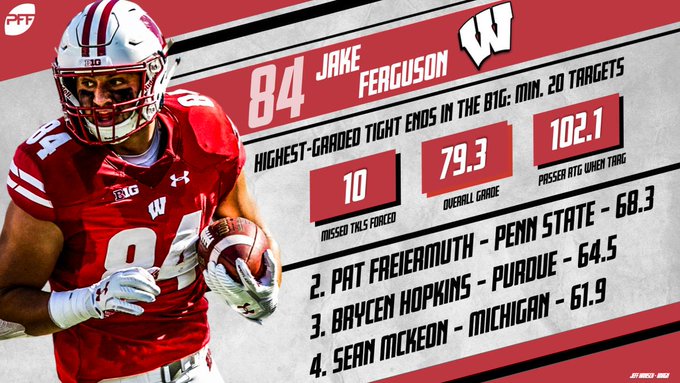 With the majority of defenses scheming to cover Moore, TE Hopkins saw a bevy of open targets and turned those into 34 catches for 583 yards. A healthy 17.1 yards per reception, his 283 yards after the catch pace all Big Ten tight ends entering 2019.