As a true freshman a season ago, Purdue’s Rondale Moore put college football on notice with his dynamic abilities as a receiver and runner after the catch.

At 5-foot-9, 175 pounds, Moore is the prototypical shifty slot receiver. Last season, he lined up in the slot on 688 of his 753 offensive snaps (91.4%) and that trend has continued to an extent this season. Moore has recorded 103 plays in the slot of 128 total offensive snaps (80.5%), and as was the case last season, all he needs is a little space to create massive yardage numbers after the catch.

Moore has carried that playmaking momentum into the 2019 season through two weeks. His Week 1 started off strong at Nevada as the standout sophomore receiver turned 13 targets into 11 receptions for 122 yards and one score with 60 yards coming after the catch. 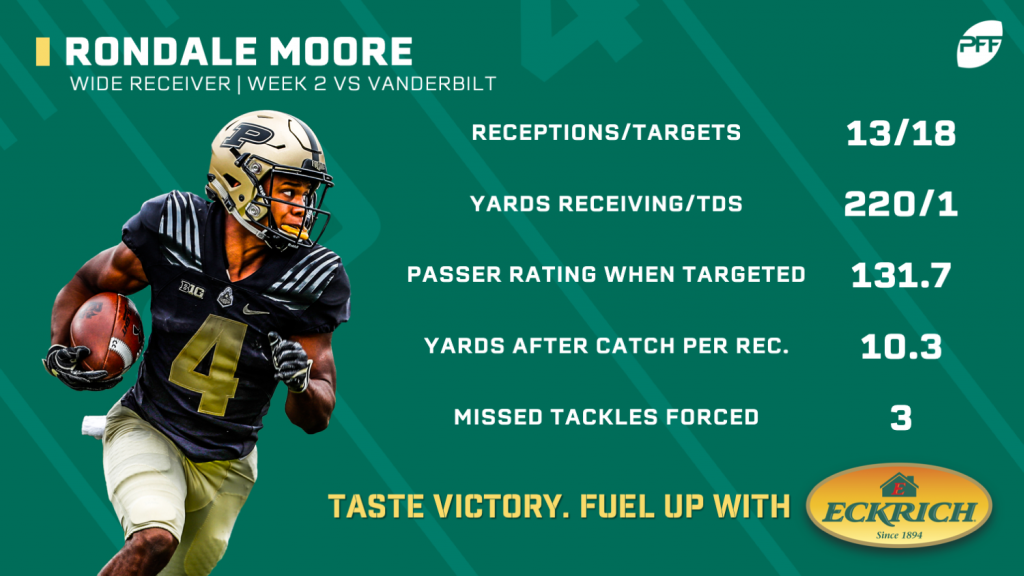 Not to be outdone, Moore ramped it up another level in Week 2, putting on a show in a huge bounce-back win for the Boilermakers vs. Vanderbilt. He led the nation’s receivers in targets (18), receptions (13) and yards (220) while forcing three missed tackles and gaining 134 of his yards after the catch. As a result, Moore finished with an 84.9 overall grade and 83.8 receiving grade for the game, which landed him a spot on PFF’s College Football Week 2 Eckrich Team of the Week.

Through two weeks, Moore is carrying the Purdue offense to the tune of the second-most targets (31), most receptions (24) and most yards (342) among wide receivers in all of college football. As predicted by his breakout 2018 season, Moore has been truly special after the catch. His 194 yards after the catch thus far this season ranks second among all FBS receivers through Week 2. He’s also forced six missed tackles, top-10 at the position, and his 13 first downs rank tied for second.

Purdue’s rising star has done most of his damage on short routes in the middle of the field, allowing his playmaking ability to take over. He’s caught 12-of-13 targets for 117 yards and a touchdown, with 70 yards coming after the catch on short routes (0-9 yards) between the numbers.

Among FBS receivers with 10-plus targets this season, Moore currently ranks top-20 in overall grade (82.8) and receiving grade (83.5).

On pace for over 1,000 yards after the catch this season, Moore continues to be a must-watch player with the ball in his hands. The competition gets tougher with TCU coming to town in Week 3 and Big Ten play ramping up starting in Week 5, but expect the dynamic Purdue slot man to continue to showcase his elite-level elusiveness throughout the rest of the season.