The college football season was back in full force with a full slate of games on Saturday and we at PFF and our team of over 500 analysts has dissected and graded every player on every snap of every game to bring you the most detailed and valid set of picks you can find anywhere.

The Week 2 Eckrich Team of the Week powered by PFF saw some impressive performances and, of course, the strength of opponent also factored into the overall selections as did the PFF player grades. 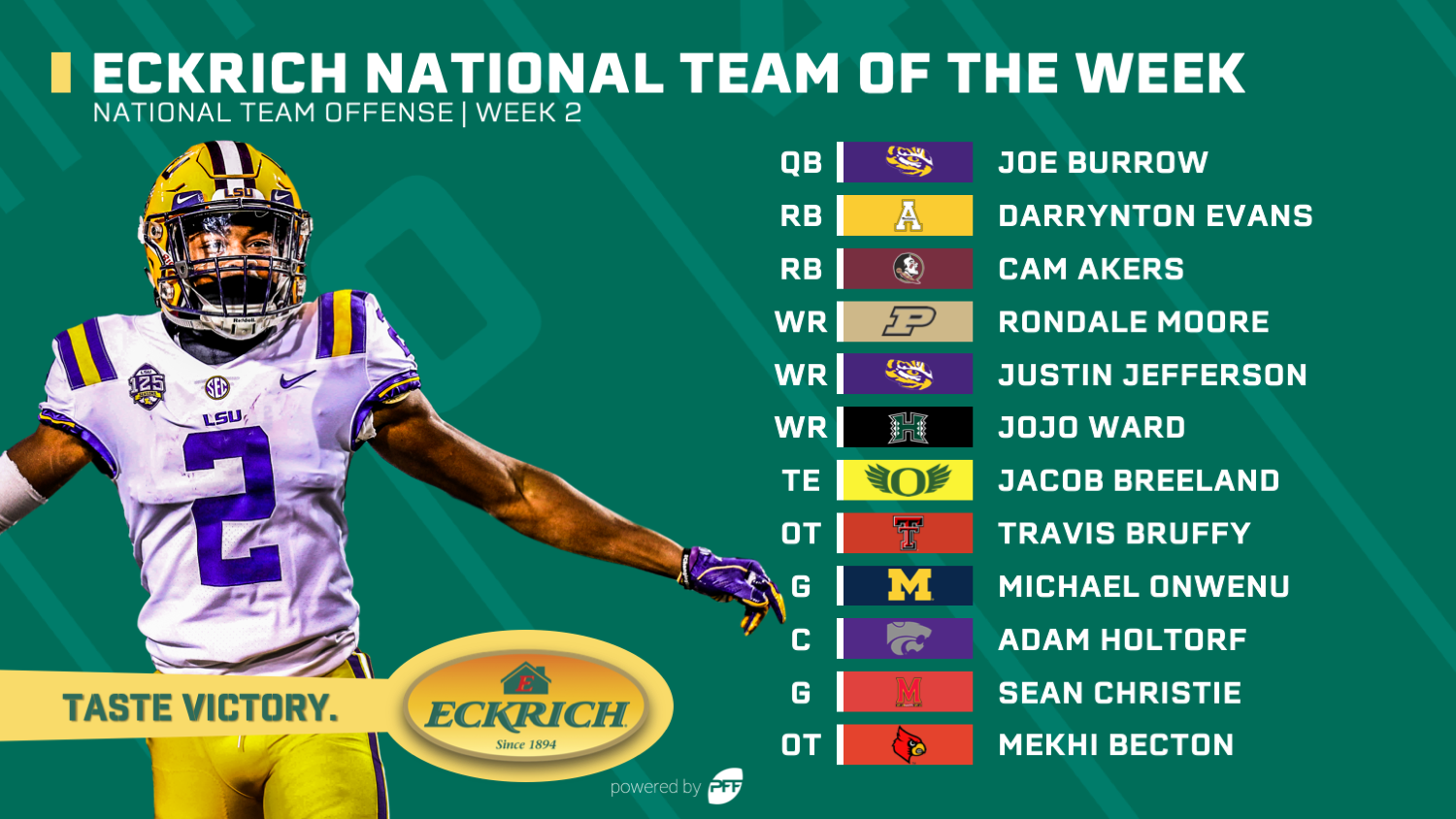 In a true breakout game for the Tigers, Burrow dominated the Texas defense with a beautiful display of passing. Burrow finished the game completing 18–of-23 passes for 384 yards and all four touchdowns on passes targeted 10 or more yards downfield with five big-time throws in the mix.

Needing just 19 carries to go for 234 yards, Evans had superb run blocking ahead of him in the Mountaineers win. Still, he racked up three scores, five more first-down runs and had five carries of at least 10 yards as App State's offense gained 276 yards on the ground and 458 total.

The Seminoles escaped a second overtime period at home against UL-Monroe but it wasn't because of the efforts of Akers as a reason for their struggles. Akers toted the ball a national-high 36 times and racked up 194 rushing yards. More importantly, he secured 110 of those yards after contact, forcing a ridiculous 11 missed tackles.

The human highlight-reel, Moore was dominant against Vanderbilt in a huge bounceback win for the Boilermakers. He led the nation's receivers in targets (18), receptions (13) and yards (220) while forcing three missed tackles and gaining 134 of his yards after the catch.

In making history for the Tigers, Jefferson was one of three receivers with 100 or more yards through the air as Jefferson was the most impressive of the trio. He hauled in nine receptions for 163 yards and three scores including 66 yards after the catch and four more additional first-down receptions.

In the nightcap, Ward hauled in 189 yards on 10 receptions against Oregon State, securing four receiving touchdowns from Cole McDonald and moved the chains on four more receptions.

Breeland hauled in a long touchdown of 66 yards while securing 80.0% of his targeted passes in Oregon's rout of Nevada. His night ended with a statline of four receptions for 112 yards and two receiving conversions with plus-grades in pass-blocking.

Bruffy allowed all of one QB hurry on his 50 snaps in pass protection and moved defenders off the line in the run game impressively. He finished the weekend with the national-best run-blocking grade of 92.6 among tackles.

The Wolverines' offense struggled to move the ball against Army but Onwenu wasn't a reason why. He logged 40 snaps each in pass protection and for the run game, finishing with the nation's best grades in each facet.

The Wildcats dominated Bowling Green and Holtorf was a big reason why as he paved huge lanes in the run game. He allowed two hurries and had two penalties called against him but that's how strong his effort in the run game was.

Christie paved the way for some impressive running lanes for the Maryland backs, finishing with strong grades across the board. He allowed one pressure in the passing game and had the country's highest run-blocking grade among Power-5 left guards.

The Cardinals got their offense rolling against Eastern Kentucky in Week 2 and Becton was a big reason why. He finished with a clean sheet in pass protection while finishing with the nation's second-best pass-blocking grade among tackles. 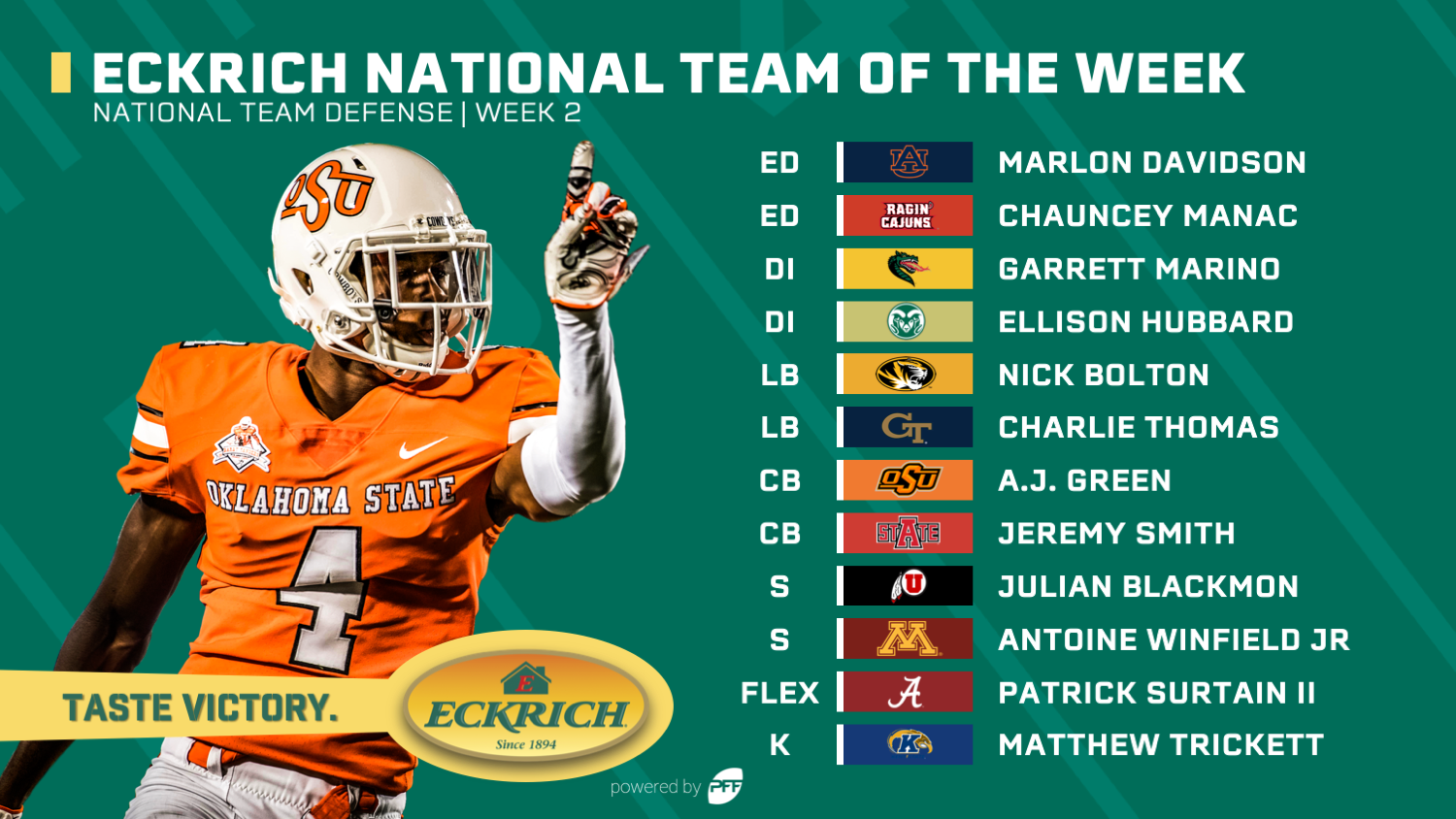 Davidson was a force for the Tigers on Saturday, finishing with six pressures on his 31 pass-rushes. He didn't get home with a sack but won over 26.7% of his pass-rush attempts in the Auburn victory.

No pass-rusher recorded a higher pass-rush win percentage this week than Manac who won 34.4% of his attempts. He registered seven pressures, two of which were sacks, and didn't miss a tackle all game.

Marino finished the afternoon with a whopping three sacks and nine total pressures for the Blazers. He needed 36 pass-rushes to accomplish such a feat, winning the majority of his pass-rush snaps in the process.

Hubbard had a strong game rushing the passer for the Rams, tallying five pressures including two sacks and an additional QB hit. He made another defensive stop in the process and had an elite pass-rushing grade.

The ‘other Missouri linebacker' no more, Bolton dominated the action on Saturday, recording two interceptions, a pick-six, four more stops and doing so without a missed tackle. Bolton and Cale Garrett will go a long way as a linebacking duo in the SEC with this type of play.

The Yellow Jackets shut down the USF offense and Thomas finished a strong performance with two sacks, four defensive stops and a forced fumble in the contest. Georgia Tech will rely heavily on its defense this season and this strong performance is a good sign for things to come.

Green was the primary coverage defender on three targets on Saturday, allowing just one reception for five yards and grabbing an interception in the process. He didn't allow a single yard after the catch and made three tackles in the contest without a miss.

Smith and the Red Wolves stymied the UNLV passing attack as Smith himself made an interception and allowed all of seven yards on five targeted passes. He made an impressive tackle behind the line of scrimmage to round out his day and had an elite coverage grade overall.

Blackmon made his way to our Saturday Standouts as he saw a targeted pass on just one of his 34 snaps in coverage, picking off that pass in Utah's win over Northern Illinois. He recorded eight total tackles and rounded out his strong performance with elite grades in coverage.

Winfield had a big game on the backend of the Gophers defense, seeing two targeted passes come his way, allowing no completions and making an interception himself. All told, he allowed a 0.0 passer rating into his coverage and made two defensive stops and a sack in the process.

Surtain II had a big game in coverage for the Crimson Tide, forcing a fumble on one play and allowing just 25.0% of the targeted passes thrown his way to be caught. He made an interception and allowed just nine yards on the afternoon.

Trickett kicked the game-tying field goal as well as the game-winning field goal in overtime for the Golden Flashes as he ‘single-footedly' won the contest for Kent State.