After grading and analyzing every player on every play of every game during the 2018 college football season, it’s time we unveil the 2019 Preseason PFF All-Pac 12 first team, second team and honorable mention for every position on offense and defense as well as for the first time ever, specialists.

The Preseason All-Pac 12 list may differ a bit from any year-end look back at the previous season as we project to the 2019 season ahead of us. Find out which of these athletes made the PFF All-American team as well. 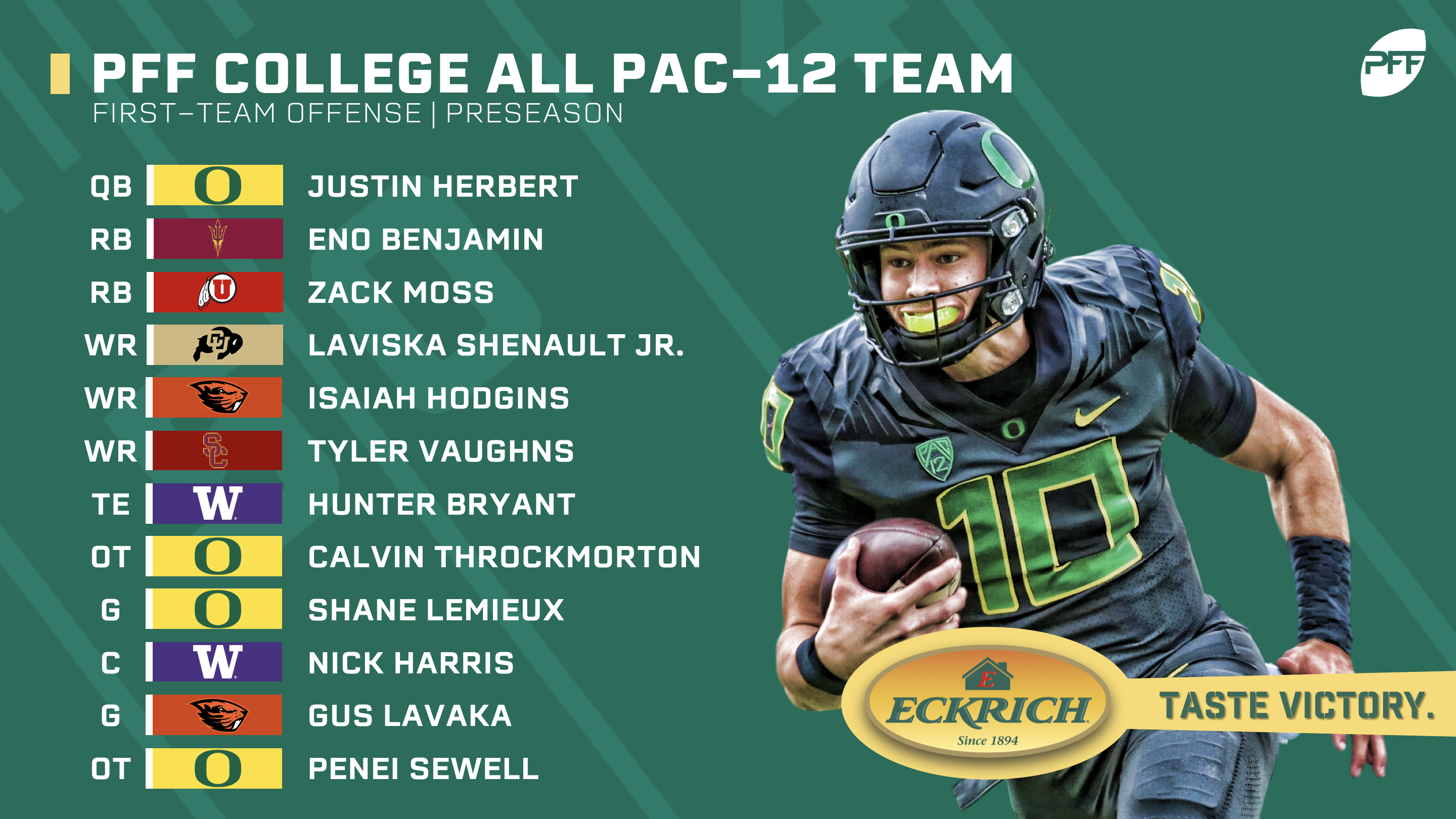 No returning running back forced more missed tackles on the ground than Benjamin last year as his 84 paces the nation's running backs.

Before an injury, Moss was a tackle-breaking machine, forcing 53 missed tackles on just 179 carries while averaging 3.54 yards after contact per carry.

Shenault averages 7.4 yards after the catch per reception and has churned out a career 3.71 yards per route run as the Colorado offense runs through him.

Hodgins whipped up an impressive 14.8 yards per reception a season ago and churned out 45 combined first-down and touchdown receptions on his 59 catches.

Vaughns broke nine tackles after the catch last season and saw a healthy 101.5 passer rating when targeted, much better than his quarterback's overall passer rating.

Missing the majority of the season rehabbing an injury, Bryant exploded during the final half of last year and his two-year grades are the tops of the position.

Throckmorton holds the nation's top pass-blocking grade since 2017 and has allowed just three sacks + hits on 862 pass-blocking reps in that two-year span.

The highest-graded returning guard, Lemieux is strong in both pass protection as he is in run-blocking while the latter leads all guards. He allowed just 11 pressures on nearly 500 pass-blocking snaps in 2018.

Lavaka holds the Power-5's 10th-highest grade in the run grade among active guards and has allowed just 10 sacks+hits on 1,074 career pass-blocking snaps.

Sewell's 84.0 overall grade for the season is the third-highest among active tackles and he allowed just eight total pressures on 215 snaps in pass protection. 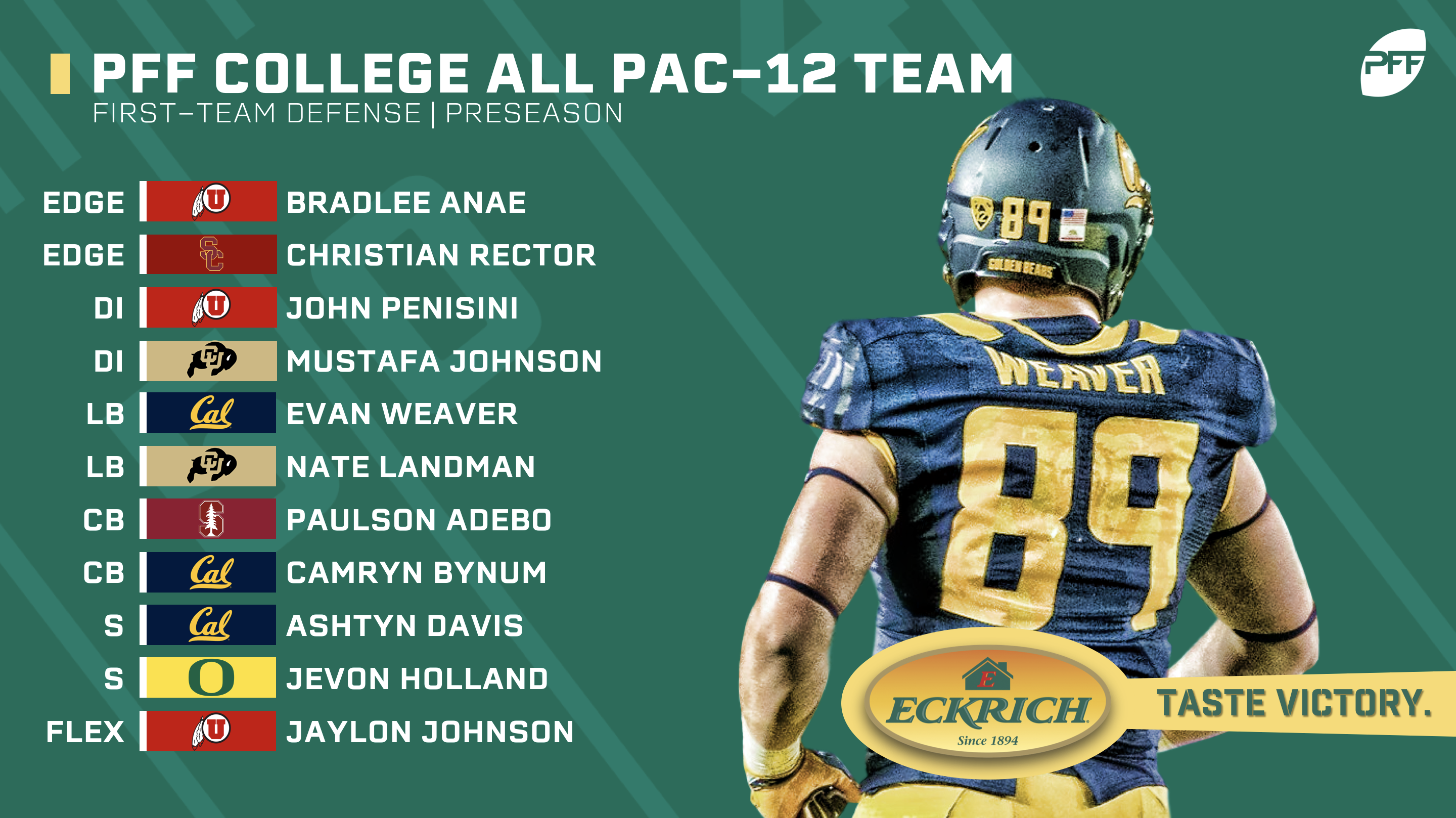 Rector's 39 total QB pressures ranked 13th among returning Power-5 edge defenders while his run-defense grade of 78.9 is a top-25 mark in the same group.

Penisini had a dominant year a season ago for the Utes, finishing with 34 total QB pressures and 24 defensive stops. He has top-20 grades among Power-5 interior defenders in both run defense and pass-rush.

No returning interior defender had more QB pressures than Johnson did a season ago, racking up 50 total with 10 sacks, eight hits and 32 more hurries.

In coverage, Weaver's a top-four graded linebacker. On the pass-rush, he’s in the top 25 among all linebackers. When stopping the run, he’s a top-five graded guy. Overall, he currently possesses the highest overall grade among linebackers from last season.

Landman's 55 defensive stops showcase just how dominant he was all over the field for Colorado as they're the fifth-most among Power-5 linebackers.

On 78 targeted passes a season ago, Adebo recorded four interceptions, 19 pass breakups and allowed no reception longer than 28 yards.

With the Power-5's 10th-highest run-defense grade to his name, Bynum was no slouch in coverage either. He recorded nine plays on the ball and allowed a 76.1 passer rating on throws into his coverage.

With 412 snaps in coverage played a year ago, Davis limited quarterbacks to just a 59.1% completion percentage while making nine total plays on the ball (4 INT, 5 PBU) on just 22 targeted passes.

Terrific in coverage, Johnson allowed a long reception of 42 yards and made four interceptions, five pass breakups and a 57.6 passer rating into his primary coverage.

Toner missed just one kick a season ago and made all 34 extra point attempts. He was perfect from inside 30 yards and even made his three attempts of at least 40 yards.

Draguicevich's 41.0 net punt average is the sixth-best among returning Power-5 punters and he knocked nearly 50.0% of his punts inside the 20-yardline a year ago.