Week 1 of the college football slate kicked off with a bang as the defending National Champion Clemson Tigers successfully kicking off their title defense, albeit with a lackluster performance against Georgia Tech.

The Week 1 Takeaways stem from the Tigers and highlight some notable performances along the way from the 16 games of action on Thursday night.

Trevor Lawrence threw all of four interceptions in his debut season but opened the year with two against Georga Tech. He finished with his second lowest-graded performance of his young career. His highlight-reel play came on a great reception by Tee Higgins and similarly, the best run of the night from Travis Etienne came on the heels of some impressive run-blocking in front of him.

Etienne's Clemson record 90-yard touchdown run saw him gain 10 yards before having to make the first defender miss, and then he used his straight-line speed to sprint for the score. He gained 207 yards on 12 carries with 112 yards after contact and eight missed tackles forced.

Still, it's a great sign that the Tigers can lean on their offensive line in case their star has an off night.

Kicking off the night's action was a heavily-anticipated game between UCLA and Cincinnati after the Bearcats went into Los Angeles a year ago and defeated the Bruins. The Bearcats defended their home turf after UCLA struggled to move the ball offensively and QB Dorian Thompson-Robinson put forth an ugly performance.

Desmond Ridder had a shaky start to his season but rattled off some big-play moments in the victory. Ridder's reliable tight end Josiah Deguara made up for a lapse in pass protection with four receptions, including a touchdown and three additional first downs.

Kellen Mond is next in line from the Jimbo Fisher First-Round QB Factory, as he demonstrated some big-time throw ability against the Bobcats. His best throw of the evening came when he was forced to roll left and dropped a perfectly-placed pass into Jhamon Ausbon's hands at the boundary.

He finished with an 80.8% adjusted completion percentage. More big-time moments like this from Mond will firmly cement him in that conversation as a first-round quarterback next April.

A new star is brewing in the MAC, as Falcons quarterback Darius Wade put forth a dominant performance against FCS opponent Morgan State. He completed 22-of-32 passes for 252 yards and three scores with three of his catchable passes going down as drops. His scrambling ability also places him in good hands, as he took off to run on three dropbacks, gaining 44 yards and picking his moments well, moving the chains with each carry.

Another performance like this one against Kansas State on the road next week, and Wade will start to gain some national attention.

Green Wave quarterback Justin McMillian put on a show against the Panthers, completing 77.8% of his passes and averaging 11.2 yards per attempt. He uncorked three deep passes, completed all of them and threw for 83 yards and two touchdowns on those passes. He dissected the FIU defense through the air while also running for 66 yards at 8.3 yards per attempt. 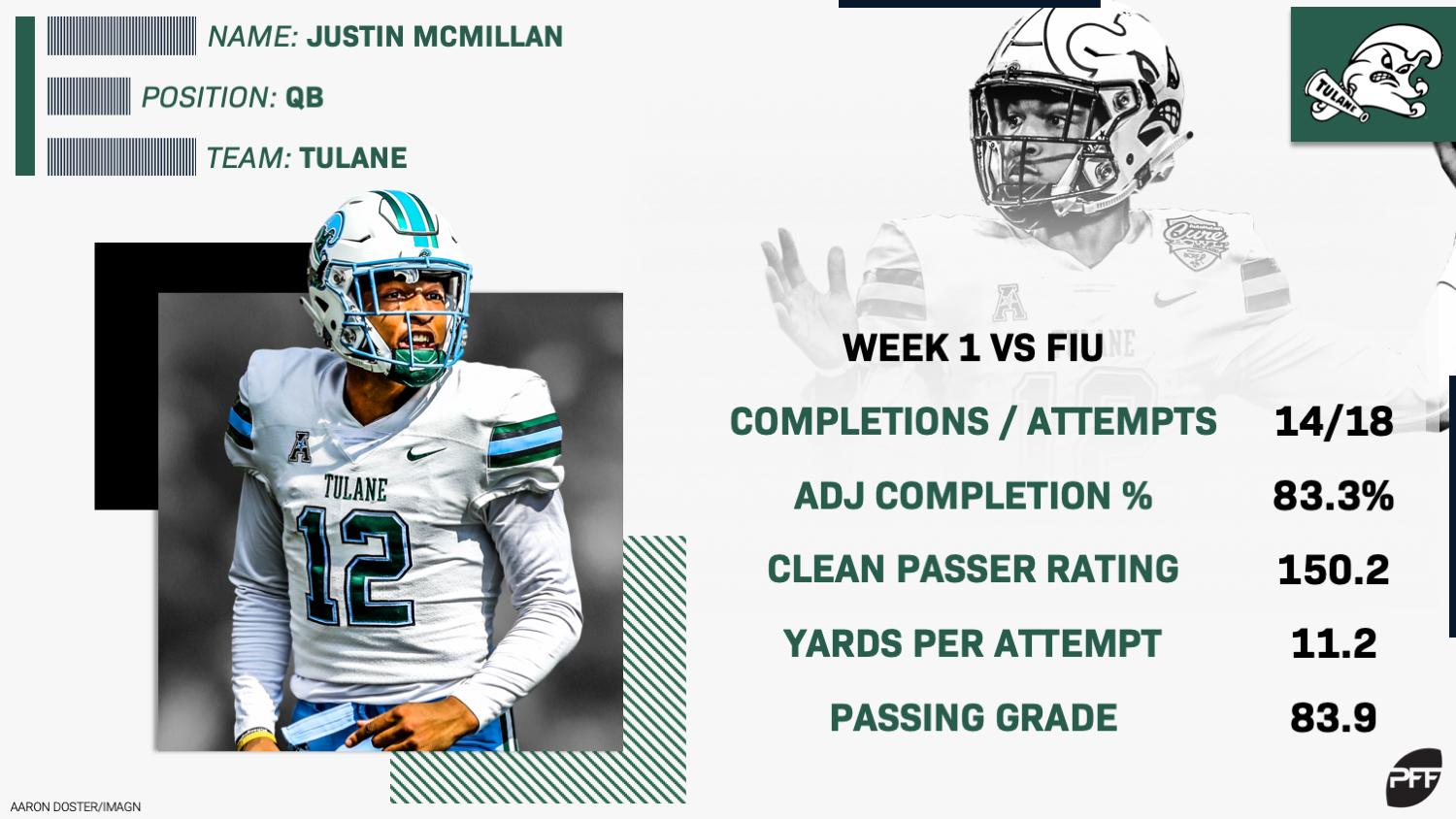 If this dual-threat ability carries over from week to week, Tulane becomes must-watch TV every game.

The Holy War was lengthened due to a lightning delay, much to the dismay of Cougar fans. Zack Moss and Tyler Huntley returned to form after injuries cut their 2018 seasons short. Moss churned out 121 yards after contact and forced a whopping 14 missed tackles. Huntley averaged a depth of target of just 5.7 yards but took care of the ball and finished with an adjusted completion percentage of 93.3% on his 16 attempts.

The Utah defense gave every glimmer of hope that this is one of the nation's best, as they limited the BYU offense led by quarterback Zach Wilson to just a 55.0 overall team grade on offense.

While the Sun Devils break in a new quarterback in Jayden Daniels, one thing has become clear, he can now count on senior wide receiver Brandon Aiyuk as his go-to target. Aiyuk saw seven targeted passes, three of which were screens, securing 116 of his 140 receiving yards after the catch and forcing three missed tackles in the process.

Aiyuk's development from JUCO has come a long way if this first-game performance is any indicator as he did seem to get more comfortable in the ASU offense as the 2018 season rolled along.