The Florida Gators were able to get back to their winning ways last weekend with an impressive 48-10 victory over Colorado State and moved their record to 2-1 on the season. The Gators won all three phases of the game and dominated from the opening whistle, but no group showed more promise in the victory than the edge rushers for the Gators.

This group is extremely talented, deep and puts consistent pressure on opposing quarterbacks and wrecks game-plans. For the season, they have combined for 30 total pressures including three sacks and four QB hits.

This feature on Florida is brought to you by Eckrich, the Official Smoked Sausage of the Florida Gators.

At the forefront of this group is Jachai Polite, a junior from Daytona Beach, who has been a menace since he got to Gainesville and continues to make his mark. Last week against the Rams, Polite had five total pressures, one sack, one forced fumble and two stops in the run game. He has a 91.2 pass-rushing grade on the season, which ranks first in the SEC and third in the nation among edge defenders with at least 50 snaps. He has created nine total pressures on 40 pass-rush snaps, which equates to a pressure every 4.44 pass-rush snap. What makes Polite's performance even more impressive is his 11.1 percent run-stop percentage, which is 10th in the SEC at the position among players with at least 20 run snaps. 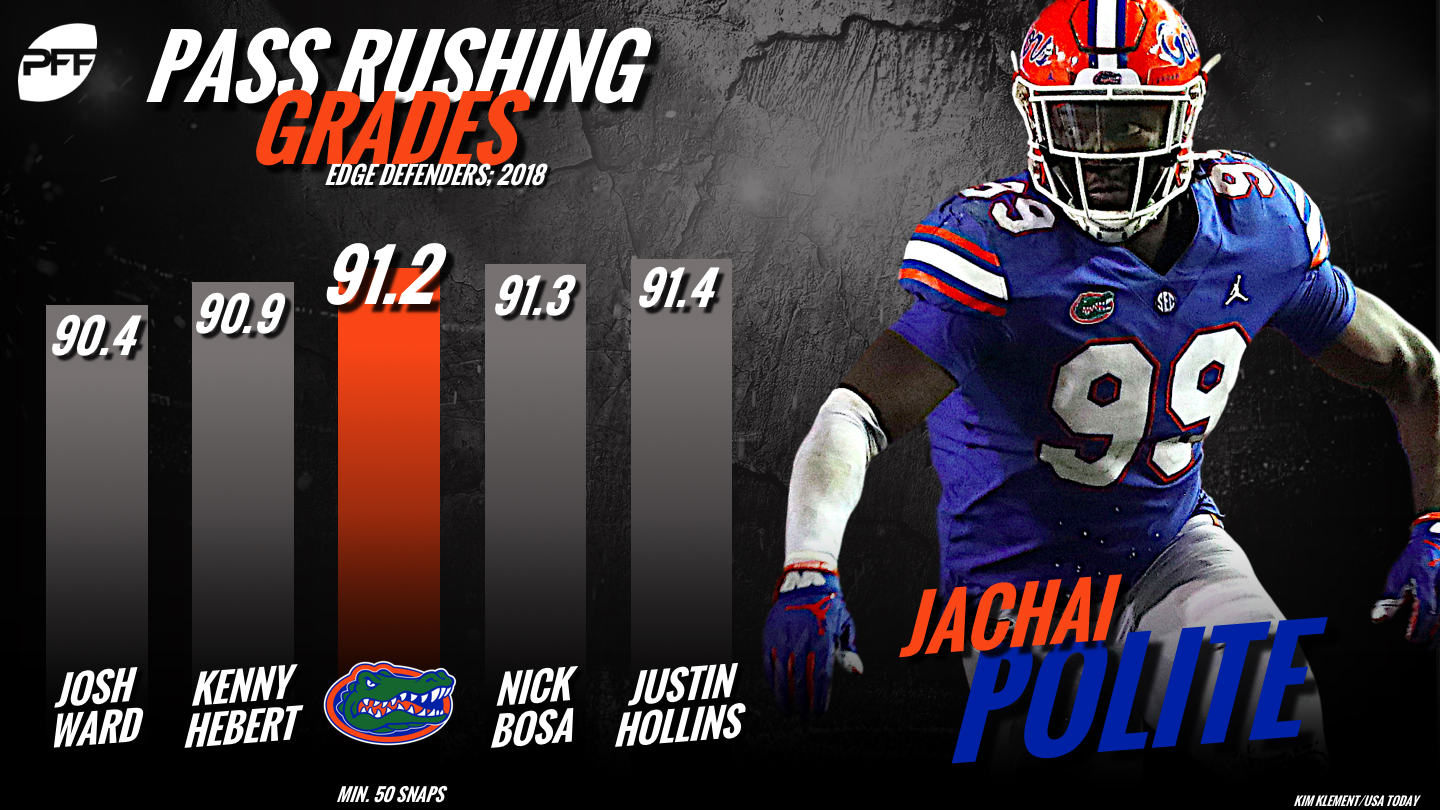 Opposite Polite, Jabari Zuniga, a redshirt-junior who is also enjoying a solid start to 2018. Last weekend, Zuniga tallied an 82.6 overall grade with a 90.8 pass-rushing grade to go along with five pressures and two sacks against the Rams. For the season, Zuniga has eight total pressures and two sacks with an 81.3 pass-rushing grade. Todd Grantham’s system brings a lot of blitzers from the second level, thus Zuniga and Polite will be left 1-on-1 on numerous occasions this year.

Cece Jefferson would (probably) like to hit reset on his senior season in Gainesville. He began the season with a two-game suspension due to his academic performance but satisfied the necessary requirements to get back on the field against Colorado State. He played 26 snaps and produced two QB hurries in his first game back.

Last season, Jefferson produced 23 total pressures (third on the team) and five sacks (tied for first with Zuniga). If head coach Dan Mullen and his staff can keep Jefferson on the field, he can terrorize QB’s with his quick get-off and bend around the edge.

This is the key matchup to watch because it is truly strength on strength. The Gators offense is more efficient when they establish the run with their stable of backs and the Volunteers excel at stopping the run with a team run-defense grade of 90.1. The Gators' backfield took a huge hit this past week with Malik Davis out for some time with a broken foot but there is still plenty of talent to go 'round.

Jawaan Taylor anchors the rushing offense as he has an 86.6 run-blocking grade at the right tackle spot while Fred Johnson has a 71.2 run-blocking grade from the right guard spot. Taylor and Johnson aren’t so bad in the passing game either, allowing only seven pressures between them including no sacks allowed. On the flip side, the Volunteers have some run-stoppers on the defensive line: both Emmit Gooden (five stops) and Alexis Johnson (seven stops) have a 17.9 percent run-stop percentage and Paul Bain (three stops) has an 11.5 percent run-stop percentage. This battle in the trenches will be one to watch closely on Saturday. 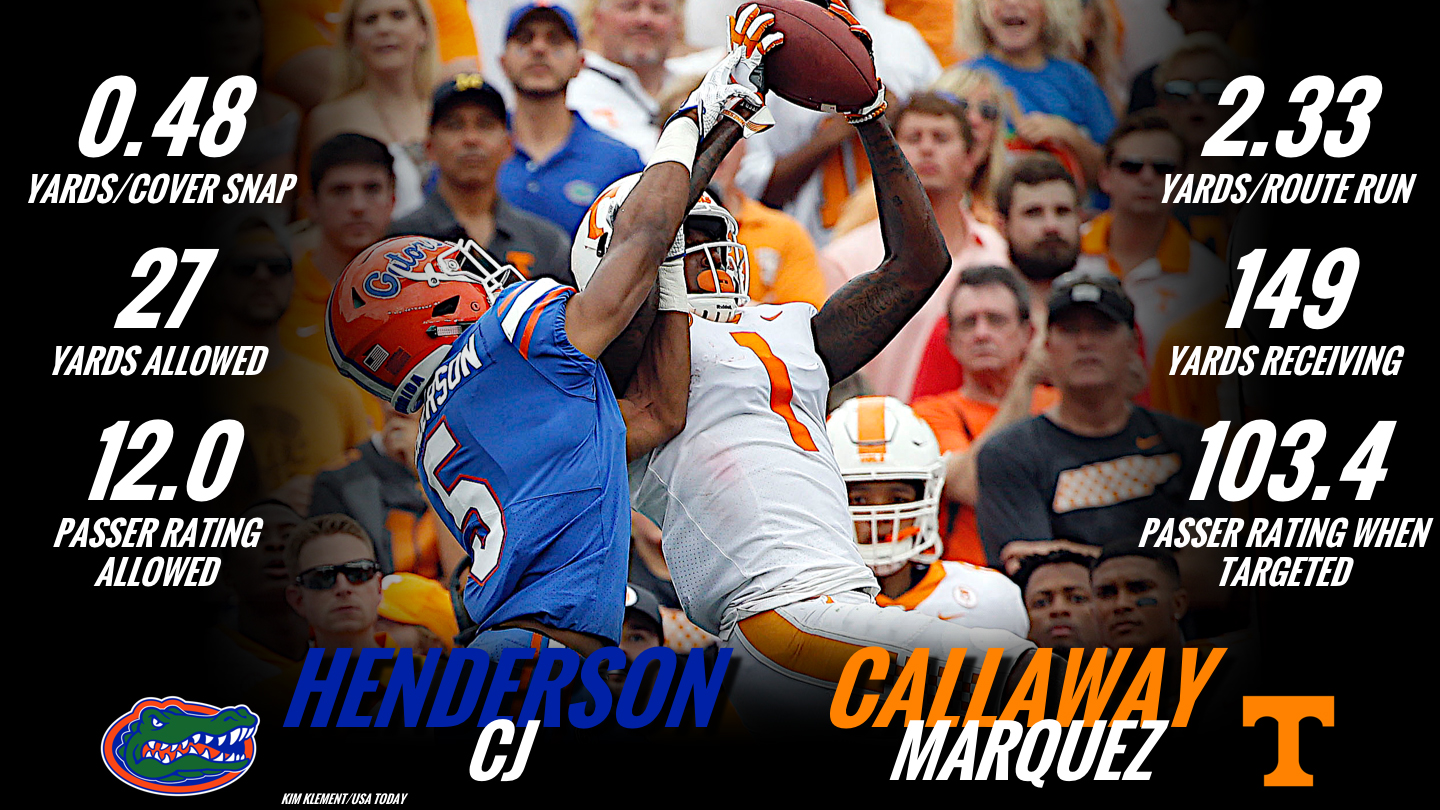 Marquez Callaway has the size and speed to be a matchup weapon and has shined throughout his career. This season, he has a 75.5 offensive grade and a 103.4 passer rating when targeted. Callaway has breakaway speed and is a threat to take it to the house running any route. For the Gators, the secondary has been a work in progress. Since Marco Wilson went down with an ACL tear, CJ Henderson has moved from his traditional left cornerback spot and now lines up on both sides of the field. With the talent that Callaway brings to the table, Henderson will have to be rock solid.

Henderson is far and away Florida’s best cover man, posting a 12.0 passer rating when targeted and only allowing four catches through three games. Florida was able to contain Callaway last season (three catches on nine targets for 46 yards), but the quarterback situation is much-improved this season at Tennessee with Jarrett Guarantano fully behind center. He has an 87.6 passing grade this season, which ranks second behind Tua Tagovailoa in the SEC, and as an 80.0 percent adjusted completion percentage.

When the Gators tangle with the Volunteers on Saturday it will be their 48th all-time meeting. Florida won on the Feleipe Franks “Hail Mary” last season, so the Volunteers will come out ready to play.