In addition to Kentucky getting back on track in Lexington, this week in the SEC brought a lot of points in Knoxville, College Station and Tuscaloosa. The game of the week in the conference, and one of the best in the nation, saw the home field  LSU Tigers outlast the visiting Auburn Tigers. Now, what is already normally one of the biggest games of the season, gets even bigger, as Alabama hosts LSU in two weeks in what will invariably be the first No. 1 vs. No. 2 regular-season matchup since the same teams’ game in November 2011. Before that game and this upcoming week become the focus, we take a last look back at Week 9 in the SEC. 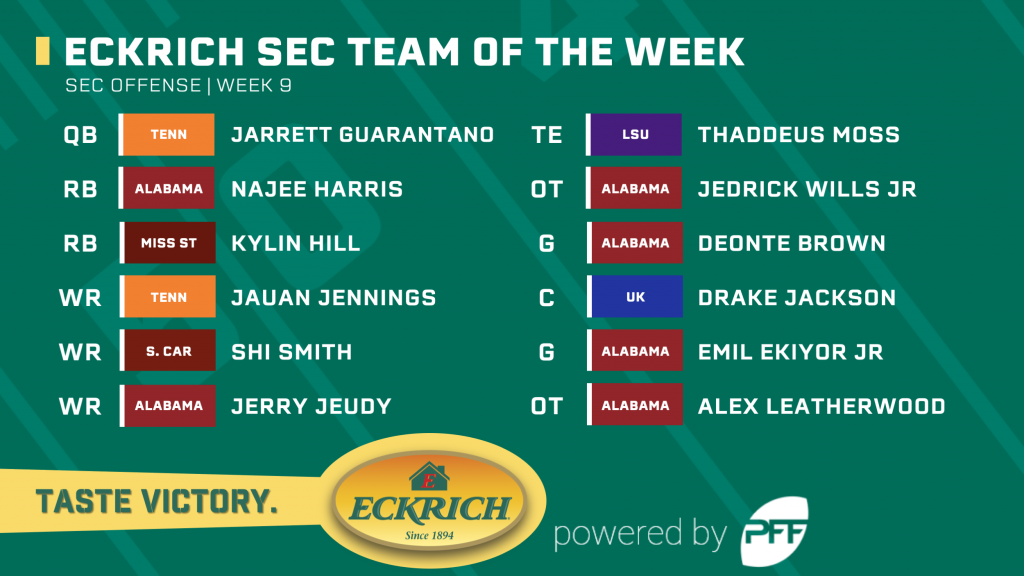 After an early-season benching, Guarantano has played quite well in two of the past three games (as many do, he struggled against Alabama). This past weekend in their win over South Carolina, he had one of the highest-graded games of his career. He did the majority of his damage down the field as well, completing 7-of-11 passes for 200 yards and two touchdowns on throws over 10 yards.

Harris continued his excellent play in a featured role in the Tide’s relatively easy win over Arkansas. All told, Harris tallied 86 yards and two touchdowns on 13 carries, gaining 54 of those yards after contact. He forced four missed tackles and also had four runs of 10-plus yards.

Hill was one of the few bright spots for the Bulldogs in their loss to Texas A&M. He collected eight first downs rushing and forced four missed tackles on his way to 150 yards and a touchdown. Of his 150 yards, 83 were after contact (55%).

Jennings was unguardable this past weekend. On eight targets, Jennings hauled in seven receptions for 174 yards and two touchdowns, including a  touchdown catch in the back of the end zone where he held on despite a big-time hit. All seven of his receptions went for a first down or touchdown, he forced four missed tackles and had a perfect 158.3 passer rating when targeted.

Smith was equally impressive on the other side of the field of Jennings above. He had 11 receptions on 14 targets for 156 yards and one touchdown, a 75-yarder that opened the scoring in the game. Smith forced two missed tackles and got 101 of his 156 yards after the catch, finishing with a 136.9 passer rating when targeted.

Tua or no Tua, Jeudy still gets open and beats defenders with regularity. Against the Razorbacks, Jeudy hauled in seven receptions on nine targets for 103 yards and two touchdowns. For the season, Jeudy now has a 127.7 passer rating when targeted.

While not Moss’ highest-graded game, he was productive when thrown to, catching all seven of his targets for 45 yards and a 93.5 passer rating when targeted.

One way to make your backup quarterback comfortable is to not allow him to be pressured, and that’s exactly what Willis Jr. and the rest of his offensive linemates (three others below) did. In his first start, Mac Jones was only pressured on one of his 24 drop-backs. Willis Jr. did not allow a pressure and also posted an elite overall and run-block grade, enough to earn him a spot on the national team of the week.

While Brown was the only Tide starting linemen to give up a quarterback pressure (he allowed two), he still posted a solid run-block grade, helping pave the way for Najee Harris and Brian Robinson Jr.

Jackson helped paved the way for Kentucky’s, and especially Lynn Bowden Jr.’s, now potent running attack. In total, the Wildcats got 149 of their 270 rushing yards before contact. Jackson did not allow a pressure in his 10 pass-block snaps, either.

Ekiyor Jr. saw his first significant action of the season and was solid in both the running game and pass blocking. He did not allow a quarterback pressure in 25 pass-block snaps, and his 55 overall snaps were more than his season total coming into the game (44).

The junior tackle continues to post solid grades week in and week out, with the Arkansas game being no different. He did not allow a quarterback pressure in 28 pass-block snaps and also posted an 82.2 run-block grade. His current 79.9 overall grade would be a career-high, significantly besting his 65.0 from a season ago. 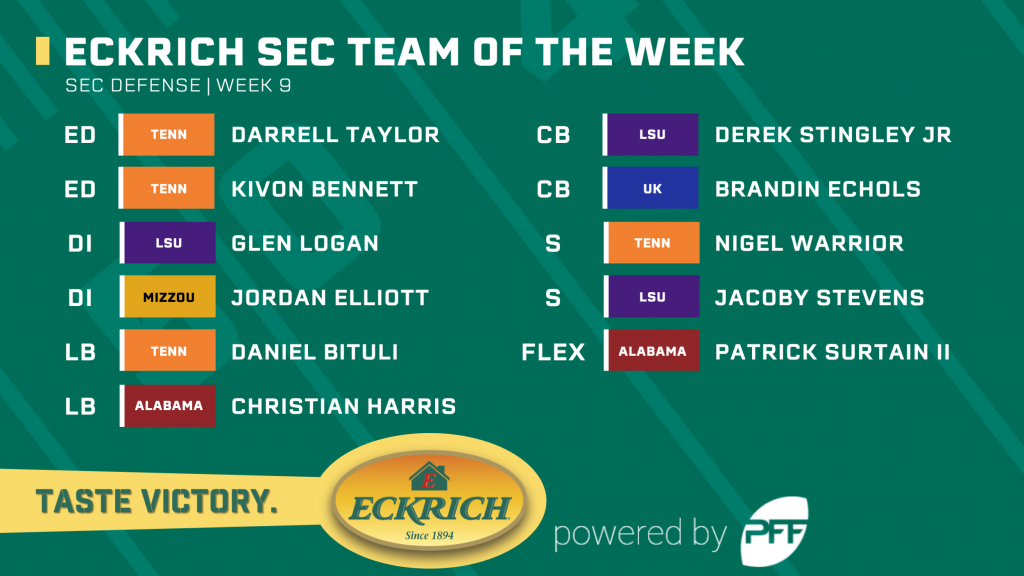 Bennett feasted opposite Darrell Taylor, posting an elite 90.7 pass-rush grade. He had six total quarterback pressures, including a sack, on 27 pass-rush snaps.

Logan had a quarterback hurry and stop in 40 total snaps. He was the Tigers’ second-highest graded defender and helped LSU keep Auburn’s offense at bay for most of the game.

One of the nation’s highest-graded interior defenders, Elliott again played well in his 47 snaps against Kentucky, with three stops and four total tackles without missing a tackle.

Bituli was another Volunteer defender with an outstanding effort against the Gamecocks. He collected seven stops and 13 total tackles without a missed tackle and allowed only 10 yards on three targets into his coverage.

The freshman linebacker continues to improve for the Tide. His performance against Arkansas earned him his second-highest grade of the season, as he posted two stops and a 71.7 coverage grade in 15 coverage snaps. On the season, Harris has also missed only three tackles.

For some reason, Auburn kept going after Stingley — and it didn’t end well. Stingley was targeted 10 times, one-third of the entire game’s total. On those 10 targets, he allowed only two receptions for 50 yards and had an stellar interception near the goal line, which equates to a paltry 8.3 passer rating when targeted.

Echols was elite against Missouri, posting an 89.6 game grade as the Wildcats shut down the Tigers. In addition to three stops in the run game, he allowed only two receptions for six yards on the four targets into his coverage, including a pass break-up, leading to a low 56.3 passer rating when targeted.

Warrior had another outstanding effort and continually finds himself as a first- or second-team selection. He had four stops and nine total tackles without a missed tackle and allowed only 19 yards on five targets into his coverage.

While Stevens did allow three receptions on three targets into his coverage, he was dominant in the run game. He collected six stops and 11 total tackles without a missed tackle.

Surtain II continued his elite sophomore campaign, making an argument as being one of the best corners in the country along with teammate Trevon Diggs. Against Arkansas, Surtain II did not allow a reception in three targets and also collected his second interception of the season. Those statistics equate to the best passer rating against you can have: 0.0.