The Week 8 Eckrich Big Ten Team of the Week powered by PFF saw some impressive performances and, of course, the strength of opponent also factored into the overall selections as did the PFF player grades. 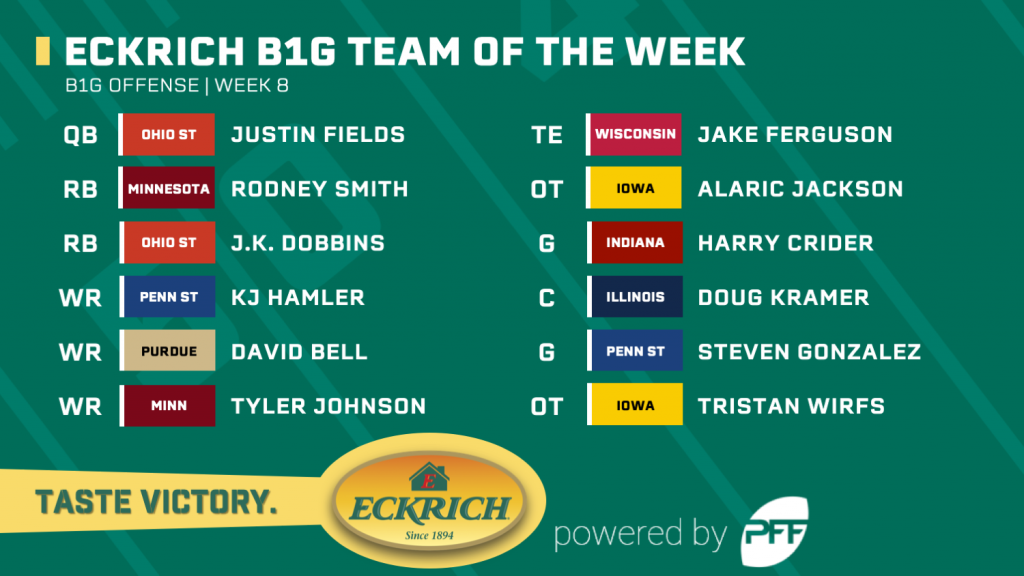 The Ohio State signal-caller didn't light up the field with big-time throws, but he did do a great job of making all the necessary plays to keep his offense ahead of schedule. He was surgical from a clean pocket, completing 14-of-18 attempts for 141 yards, three scores and a passer rating of 138.9, and he ended the game with a passing grade of 88.3, his sixth single-game passing grade north of 80.0 this season.

Smith carried the ball 19 times against Rutgers in Week 8, and he amassed 111 rushing yards and two touchdowns as Minnesota continued their impressive start to the season. He forced four missed tackles, secured four additional first-down conversions and averaged a very healthy 3.16 yards after contact per attempt on the day.

Dobbins ran tough throughout Ohio State's Week 8 matchup against Northwestern, racking up 120 total rushing yards with 90 of those yards coming after he was contacted by a defender. He forced two missed tackles, found the end zone once and picked up five total first downs.

David Bell ended his Week 8 bout with a receiving grade of 83.3, the highest receiving grade of his year so far. Targeted a staggering 17 times in the game, he caught 13 passes for 197 receiving yards, one touchdown and 10 additional first downs, averaging an impressive 3.72 yards per route run.

Johnson topped the 100-yard receiving mark for the second game in a row by catching six of his nine targets for 130 yards and a score in his Week 8 game against Rutgers. He moved the chains on all six of his receptions, forced two missed tackles and generated a passer rating of 146.8.

The Wisconsin tight end made a significant impact in the receiving game this week, catching 5-of-6 targets for 77 yards and a touchdown. All five of his catches resulted in a conversion—either by of a touchdown or first down—and he averaged 2.41 yards per route run on the day.

The Purdue left tackle bounced back from a disappointing Week 7 performance to earn a 79.8 overall grade in Week 8, the best single-game grade of his season to date. He allowed just one pressure on 37 pass-blocking snaps and paved the way with a 79.1 game grade as a run-blocker.

Kramer had a strong all-around showing in Week 8 against Wisconsin, but he stood out in pass protection by keeping a completely clean slate across his 30 pass-blocking snaps.

The Penn State left guard produced a perfect 100.0 pass-blocking efficiency in Week 8 after he didn't allow a single pressure on any of his 32 pass-blocking snaps.

Wirfs put on another excellent all-around performance in Week 8 against Purdue, earning 70.0-plus grades as a pass-blocker (84.7) and as a run-blocker (77.3). He didn't allow a single pressure across his 37 snaps in pass protection on the day. 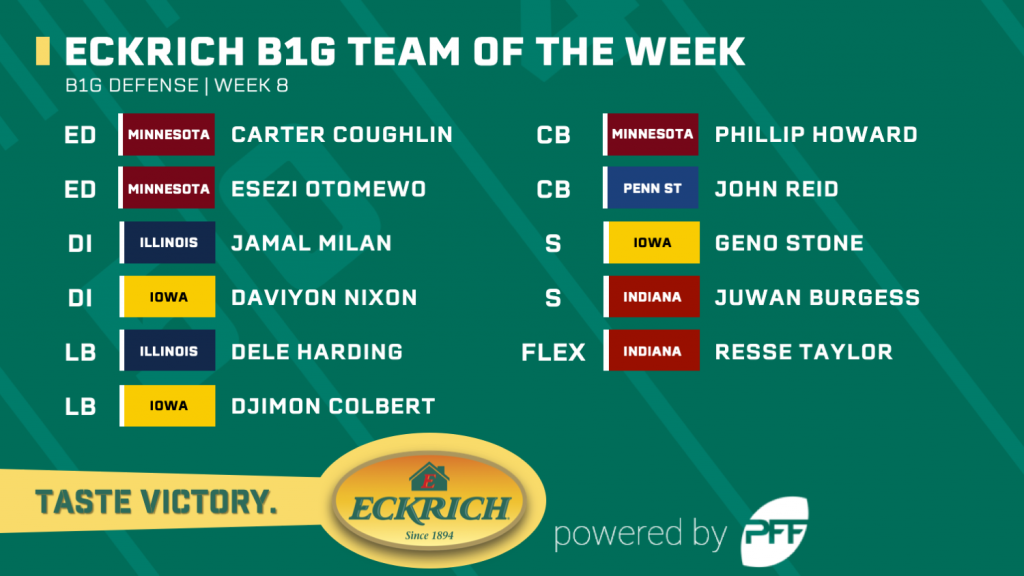 Coughlin was his usual, reliable self in the pass-rush for the Golden Gophers in Week 8, tallying a sack, a hit and two hurries on his 14 pass-rush snaps, but he truly shined when he dropped back into coverage, breaking up both of the passes that were sent his way.

Along with his teammate, Otomewo found himself in the backfield relatively often in Week 8 and ended the game with a sack and two hurries from 20 pass-rush snaps.

Nixon only rushed the passer 29 times in Week 8, but he sure made those opportunities count. He went on to generate seven total pressures in the game and left the field having earned a 76.0 pass-rush grade.

Milian was very productive in his Week 8 game against Wisconsin, generating one quarterback pressure and two defensive stops against the run.

Harding was tackling machine in his Week 8 clash with Wisconsin. He recorded 11 solo tackles on the day—with seven of those tackles resulting in a defensive stop—and he left the game fully deserving of a season-best 86.2 tackling grade.

The Iowa linebacker made an impact in all key facets of the game in Week 8, ending the week with 70.0-plus grades as a run defender (83.3), tackler (84.2) and as a coverage defender (79.3). He recorded two defensive stops in the game and broke up two of the nine passes that were thrown into his primary coverage.

Howard stepped up to the plate in a big way in what was only his second game of the 2019 college season. He was targeted just once in the game, and that pass resulted in an interception.

Targeted three times in Week 8, Reid allowed just two completions for a grand total of four receiving yards, with his other target resulting in a pass breakup.

Stone was another who put on an all-around show in Week 8, ending the game with 70.0-plus grades in coverage (86.8), against the run (75.4) and as a tackler (84.1). He recorded two defensive stops on the day and forced an all-important fumble.

Burgess ended Week 8 with an elite overall grade of 93.6 thanks to a great play made in coverage where he forced a fumble before recovering the ball himself.

Taylor ended his Week 8 game with an interception, but he also added a quarterback hurry from a blitz and a defensive stop against the run.