The Week 7 Eckrich SEC Team of the Week powered by PFF saw some impressive performances and, of course, the strength of opponent also factored into the overall selections as did the PFF player grades. 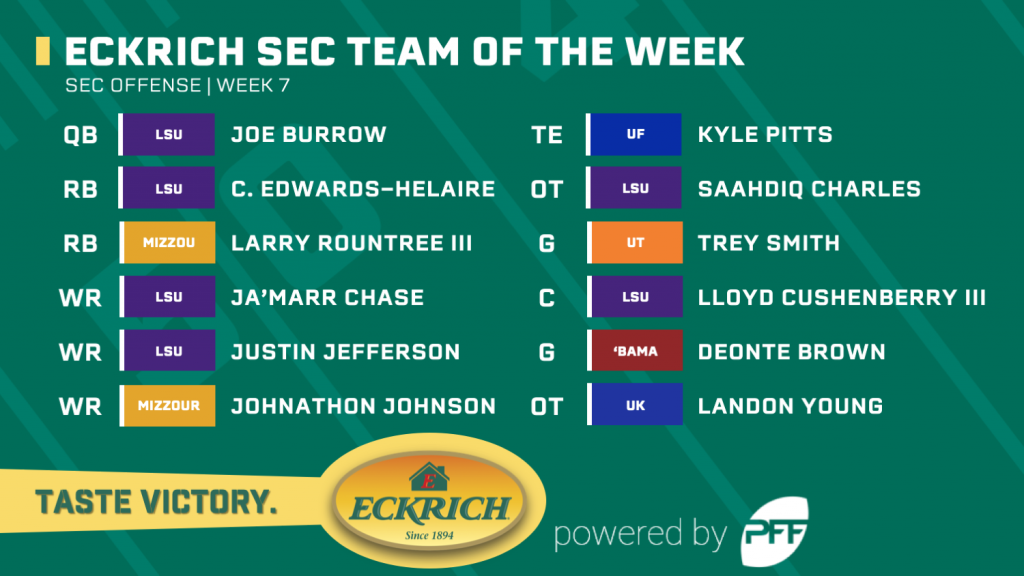 Our highest-graded quarterback is no ordinary Joe.  Not just the SEC quarterback of the week, Burrow again found himself on our national team of the week.  In addition to his stellar passing numbers (87.5% adjusted completion rate and 157.1 passer rating), Burrow picked up 40 yards on five scrambles, with 18 of those yards coming after contact.

With Florida’s defense so keyed on LSU’s dynamic passing game, Edwards-Helaire was able to feast on open holes all night.  He had seven first downs or touchdowns in 13 carries, including three missed tackles forced and three 10-plus yard carries.

Rountree III continues to lead the Tigers’ rushing attack, picking up 126 yards and two touchdowns on 21 carries against Ole Miss. For the game, he had seven first-down runs, avoided four tackles and got 81 of his 126 yards after contact.

Chase caught seven of his 10 targets for 127 yards and two touchdowns. In addition to his 152.1 passer rating when targeted, he forced four missed tackles after the catch.

Just like his receiving mate above, Jefferson continued his lights-out season by catching all 10 of his targets for 123 yards and a touchdown for a 151.3 passer rating when targeted.

Johnson turned in his best game of the season, putting up an elite 90.0 overall grade and 88.0 receiving grade on 11 targets.  He caught eight of those targets for 110 yards and avoided three tackles after the catch.

Pitts is turning into quite the weapon for coach Dan Mullen’s offense. This week was his second in a row of double-digit targets, as he caught five of his 10 targets against LSU for 108 yards and a 21.6 yards per catch average.

Against one of the better pass-rushing teams in the nation, LSU’s offensive line kept Joe Burrow clean on 24 of his 29 drop-backs. Charles allowed the lone quarterback hit on 30 pass-block snaps and had the highest run-block grade (75.9) for the Tigers.

A feel-good story of the college football season, the now healthy Smith is getting back to his dominating self, finishing the Vols' victory over Mississippi State with an elite 90.3 grade. He didn't allow a quarterback pressure in 18 pass-block snaps and led all linemen in the conference in run-block grade.

Cushenberry III has struggled in pass protection this season but put up his highest-graded game in the Tigers’ big win. He allowed only two quarterback hurries on 30 pass-block snaps and had a season-best 71.3 run block grade.

In the Tide’s victory over Texas A&M, Brown allowed only one hurry in 36 pass-block snaps and also recorded the highest run-block grade among Alabama linemen. 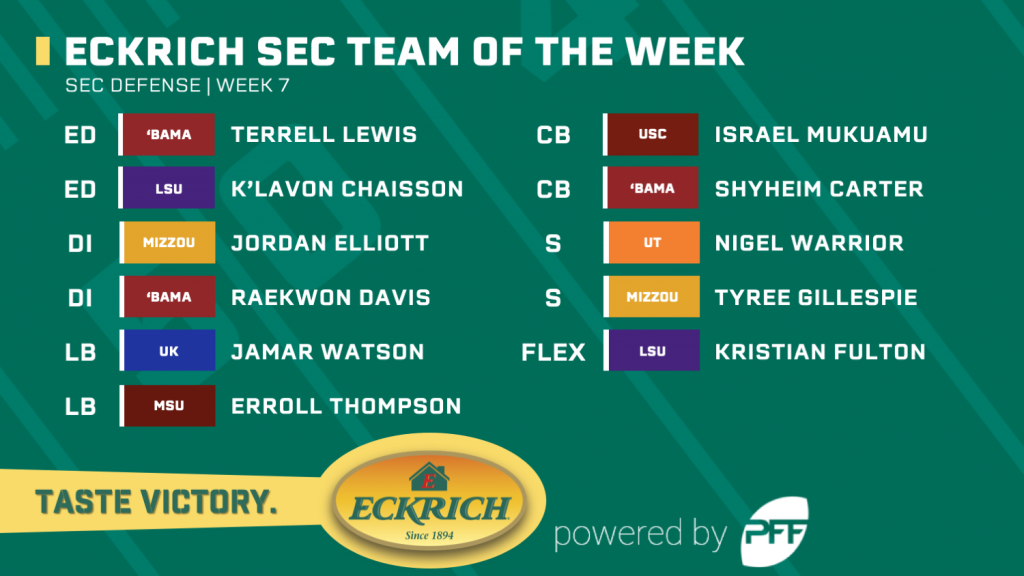 Lewis absolutely lived in the Aggies’ backfield, collecting 11 total pressures — including two sacks — on 35 pass-rush snaps. In addition, Lewis had three stops in the run game.

Chaisson had a sack and QB hurry on 36 pass-rush snaps and was all over the field in the run game, leading the team with five stops.

The second-highest graded interior defender in the nation continues to dominate week in and week out. Elliott was the Tigers’ highest-graded defender against the Rebels as he tallied three quarterback pressures and five stops in the run game.

While not quite as much as Terrell Lewis above, Davis also constantly pressured Texas A&M quarterback Kellen Mond. Davis finished the game with five pressures.

Watson posted an elite grade in his 40 overall snaps. He tallied three quarterback pressures, a stop, and did not allow a reception in his lone target in coverage.

Thompson was the Bulldogs' highest-graded defender and put forth an outstanding effort in a loss. He finished the game with an elite run-defense grade, collecting seven stops and missing only one tackle in 13 attempts.

What a day for Mukuama, as the Gamecocks went into Sanford Stadium and upset Georgia. Also on our national team of the week, Mukuama allowed only four receptions on seven targets for 38 yards. He also collected the first, second and third interceptions of the season for Georgia quarterback Jake Fromm for a paltry 32.7 passer rating into his coverage.

Carter allowed five receptions on eight targets for only 45 yards and had a pass breakup in coverage. He was elite in the run game, too, collecting four stops and a 94.7 run-defense grade.

Warrior finished the Vols' victory with two stops and allowed only one reception on two targets for 17 yards. Additionally, he picked off his second pass of the season.

Gillespie was not targeted in the passing game, but he finished with an elite tackling grade, totaling nine tackles and four stops without a miss as the Tigers held off Ole Miss.

Fulton was the Tigers’ highest-graded defender. He allowed five receptions on seven targets, but for only 33 yards and had one pass breakup. In addition, he did not miss a tackle in five attempts.