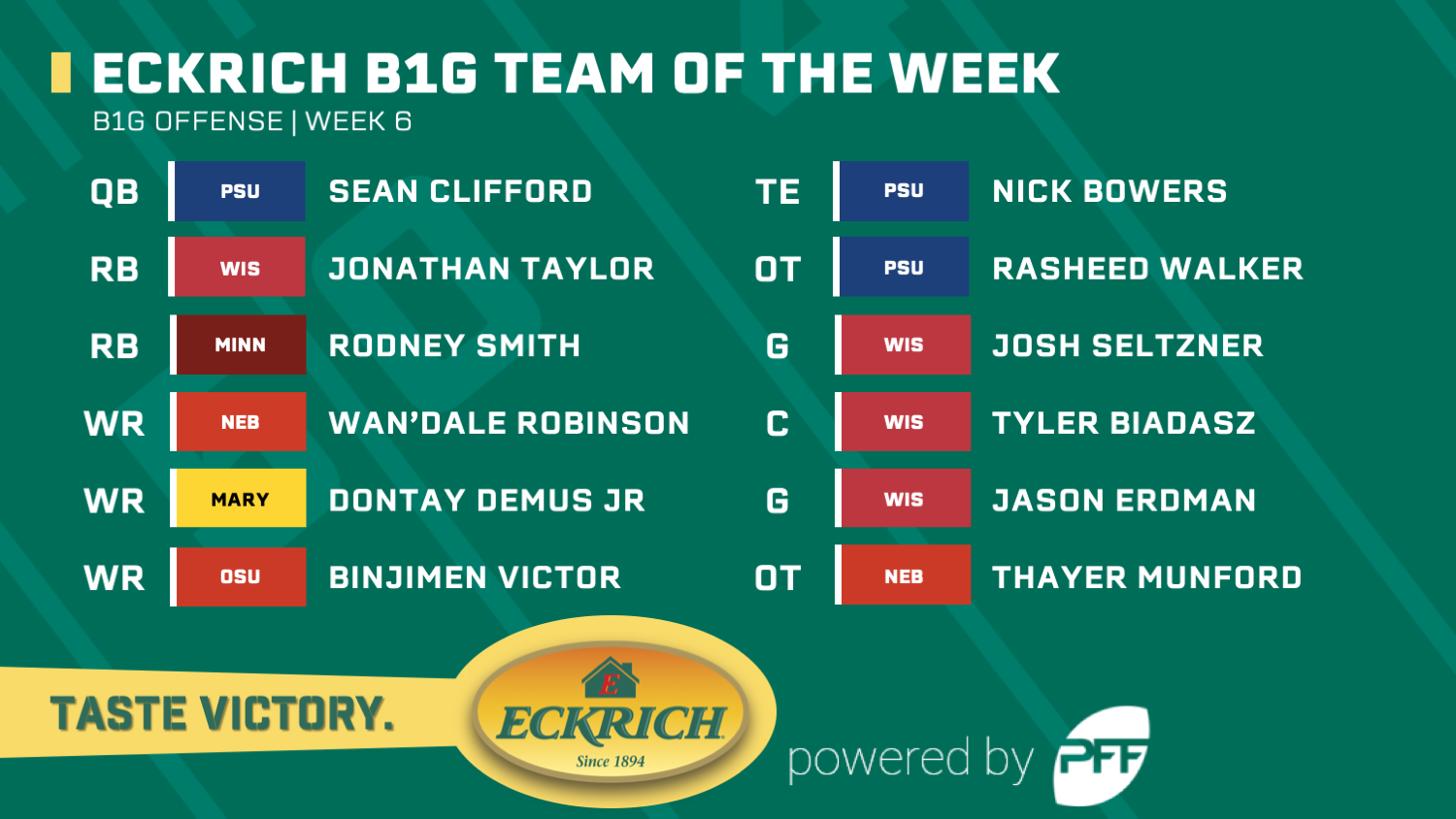 Clifford and the Nittany Lions needed little time to finish off Purdue once the second half began as their signal-caller completed 21 passes for the game, averaging 8.8 yards per attempt and leading the conference with three touchdown passes. He finished with nine more first-down tosses as well as he kept his offense on schedule and moving into their meeting with Iowa's stout defense.

Sure, it was against Kent State but the lesser competition doesn't take away from what Taylor was able to do against the Golden Flashes on Saturday. He found the holes his offensive line made at ease and when he needed to call his own number, he broke seven tackles, gained 115 of his 186 yards after contact and ran for 9.8 yards a carry. His five total touchdowns on the afternoon push his season total to 16 as he's secured his top spot among running backs on the Heisman watch list yet again.

The Gophers have quietly moved to 5-0 after securing the program's 700th win on Saturday against Illinois. Smith was a big component of the 700th victory despite finding the end zone just once. He ran the ball 24 times but tallied 211 yards on the ground with 154 of those yards coming after contact and finishing with eight broken tackles. He gained an additional eight first downs on his carries and powered Minnesota on the ground as he returns to full health.

Hauling in 123 receiving yards on seven catches, Robinson didn't find the endzone but did move the chains on three receptions. He broke two tackles and gained a whopping 95 yards after the catch, both of which led the conference.

Demus caught the highlight-reel play of the day for the Terrapins as he scored on an 80-yard reception. He gained a total of 76 yards after the catch and saw a passer rating of 135.4 when targeted on the afternoon.

There weren't a lot of highlights from the Big Ten receivers, compared to what we've become used to from this group in weeks past, but Victor finished with a 3-catch, 79-yard statline that also saw him find the end zone and move the chains for a first down. He moved the sticks with some shifty moves after the catch and gained 49 of his 79 yards after the reception.

Grabbing three receptions for 66 yards, Bowers was a chain-mover and a dominant aspect of the Nittany Lions grinding offense. He saw 40 of his yards come after the catch including his long reception of 48 yards and also had very strong grades in the run and pass-protection game.

Without a pressure allowed on his 25 pass-blocking snaps, Walker also finished with a dominant game when blocking for the run. He had plus-grades in each facet and was integral in pass protection along Clifford's blindside.

Seltzner is the first of the Badgers represented on the interior of the offensive line as he paved the way in the run game in his limited action while also finishing without allowing a QB pressure.

No shocker here as Biadasz paved the way for another big game on the ground for RB Jonathan Taylor. Biadasz led the Badgers with his 73.7 run-blocking grade that was good enough for third in the country and didn't allow a single QB pressure on 18 pass-blocking snaps.

Erdmann gets the third spot for the Badgers as he finished with a dominant game in the run game and allowed just a single QB pressure on his snaps in pass protection.

Finishing with the conference's highest run-blocking grade among tackles, Munford also finished the weekend with a clean sheet in pass protection. On his 33 pass-blocking snaps, he didn't allow a single pressure. 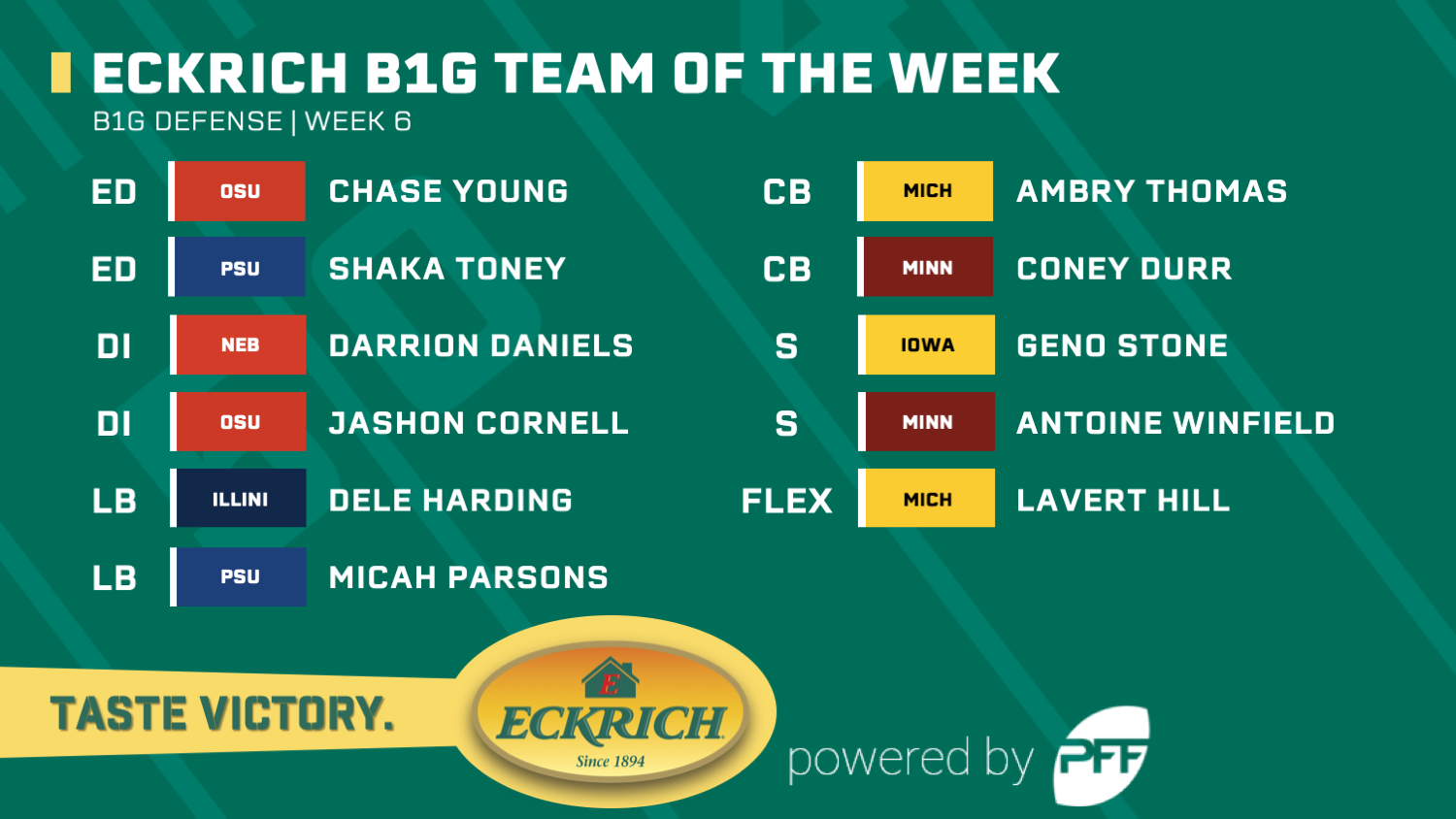 Winning just 33.3% of his pass-rushes this week, Young still led the country in that regard this weekend after he demonstrated what makes him such a rare talent against Michigan State. He finished the game with nine pressures and elite overall and pass-rush grades as he's furthering himself from the pack at edge defender this season.

While multiple pass-rushers had a big game in the Big Ten, Toney's three-sack performance and eight total pressures rose to the top next to Young. He recorded three sacks to go with his five hurries as he chipped in with another defensive stop in the run game to round out his full effort.

While he didn't register a QB pressure on the afternoon, Daniels was a space-eater in the middle for the Cornhuskers. He racked up six total tackles without a single missed attempt and nabbed two defensive stops in the run game for an overall stout performance.

The opposite of his counterpart on this team, Cornell got it all done on the pass-rush for the Buckeyes. He registered six total pressures on just 19 pass-rushes, including a sack, a QB hit and four more QB hurries. He chipped in with another solo tackle as a defensive stop in the run game.

It wasn't in a win but Harding's 90.0 overall grade was the highest among all linebackers in Week 6. He chipped in with 13 total tackles, five defensive stops and on 17 snaps in coverage, was targeted twice and allowed a mere 24 yards to go with an interception.

Parsons flew around the field as well, most notably in run defense for the Nittany Lions. While he chipped in with a sack and a QB hurry, he recorded four defensive stops across the middle of the field for Penn State as he roamed sideline to sideline with ease.

You don't limit Nate Stanley and the Iowa offense to just three points and not secure someone on this list as Thomas did not allow a single catch on three targeted passes. He recorded two solo tackles and finished with an interception to garner a 0.0 passer rating on throws into his coverage.

Durr finished with a similar stat line to Thomas, not allowing a single reception and recording two solo tackles without a miss. He broke up a pass into his coverage and had no negatively-graded plays in the victory.

Stone was an absolute monster on the backend for the Hawkeyes, even if they were unable to secure the victory. He recorded four solo tackles without a miss, two defensive stops and allowed just a single catch into his primary coverage. He picked up an interception and a pass breakup to see a 0.0 passer rating into his coverage.

Another dominant performance from the Minnesota safety as he brought down three solo tackles with a defensive stop and was lockdown in coverage. He didn't allow a single yard into his coverage and grabbed an interception to see a 16.7 passer rating on throws into his primary coverage.

Leaping for an acrobatic interception, Hill was the primary coverage defender on four other targets, allowing three catches for the day but only nine yards after the catch. He broke up another pass and finished with a 57.5 passer rating allowed into his coverage.