The Week 2 Eckrich Big Ten Team of the Week powered by PFF saw some impressive performances, and after our team of over 500 analysts graded every single player on every single play of every game, we give you the top players from the weekend. 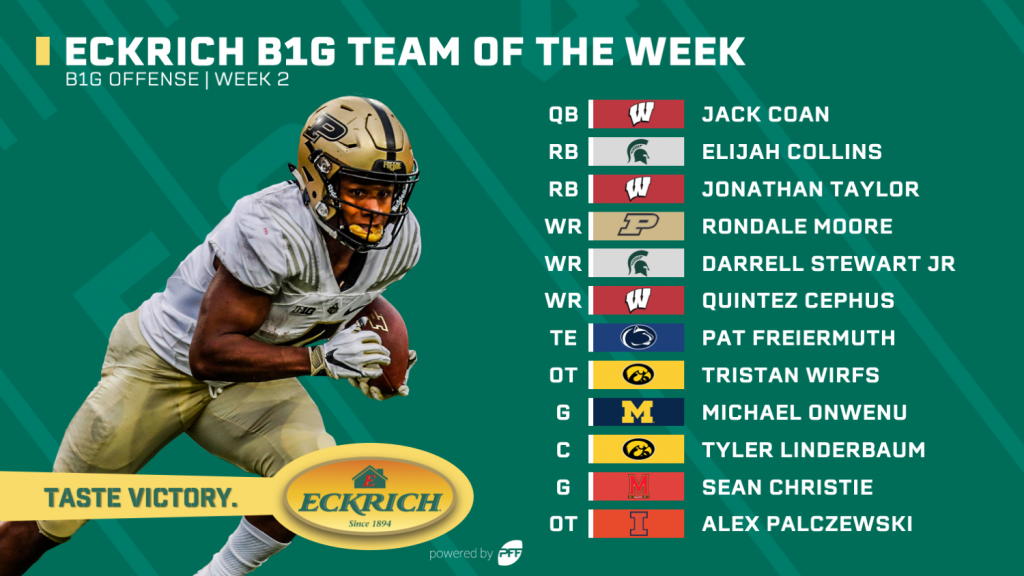 Coan had an incredibly strong performance against Central Michigan, showcasing perhaps just why he has kept highly-recruited Graham Mertz on the bench as he completed 78.8% of his passes for 363 yards and averaged 11.0 yards per attempt. He unleashed two big-time throws and finished with the conference's best adjusted completion percentage on the afternoon.

Finishing with the conference lead in rushing yards, Collins needed just 17 carries to reach 192 on the ground with 115 of them coming after contact. He broke four missed tackles and averaged 6.76 yards after contact per attempt.

Taylor reached 100 yards for the second time this season and 22nd time in his career (in 27 games). What separates the 2019 season from years past is his receiving skill that has developed, churning out three receptions and another touchdown, giving him three receiving scores this year.

The Purdue offense may as well be called ‘The Rondale Moore Show' as he saw 18 targets to lead not only the Big Ten but the country among receivers. He turned those into 13 receptions, 220 yards, 134 yards after the catch and the nation's most elusive receiver broke three missed tackles against Vanderbilt.

Stewart ripped off 10 receptions on 13 targets for 185 yards and a score. He gained 72 of his yards after the catch and nine of his 10 catches resulted in either a first down or six points.

Cephus' offseason troubles aside, he was dominant against CMU, securing six catches for 130 yards and two touchdowns. He averaged 8.2 yards after the catch per reception and moved the chains on three of his receptions for a first down.

Across the country, tight ends were rarely used in Week 2, except for the Big Ten where Freiermuth saw nine targets and brought in eight catches. His 99 yards saw him gain 50 after the catch and secured two touchdowns and two first-down receptions.

Showcasing what makes him such an intriguing and top-notch draft prospect, Wirfs finished the afternoon against Rutgers by allowing a single QB hurry on 36 pass-blocking snaps and the conference's top run-blocking grade to boot.

Michigan's offensive line handled their business against a stout Army defensive line and Onwenu was the star. On 40 pass-blocking snaps, he kept a clean sheet while finishing with an elite run-blocking grade.

On 36 snaps in pass protection, Linderbaum didn't allow a single pressure while finishing the weekend with the conference's highest run-blocking grade among centers.

Maryland's Christie was dominant in the run game for the Terrapins as they ran all over Syracuse. He also allowed just one pressure on his 32 snaps in pass protection as well.

Illinois got a strong performance from their long-time tackle who has already logged well over 1,600 snaps along the offensive line for the Illini. On Saturday, he allowed just one hurry on 42 pass-blocking snaps and was solid in the run game as well. 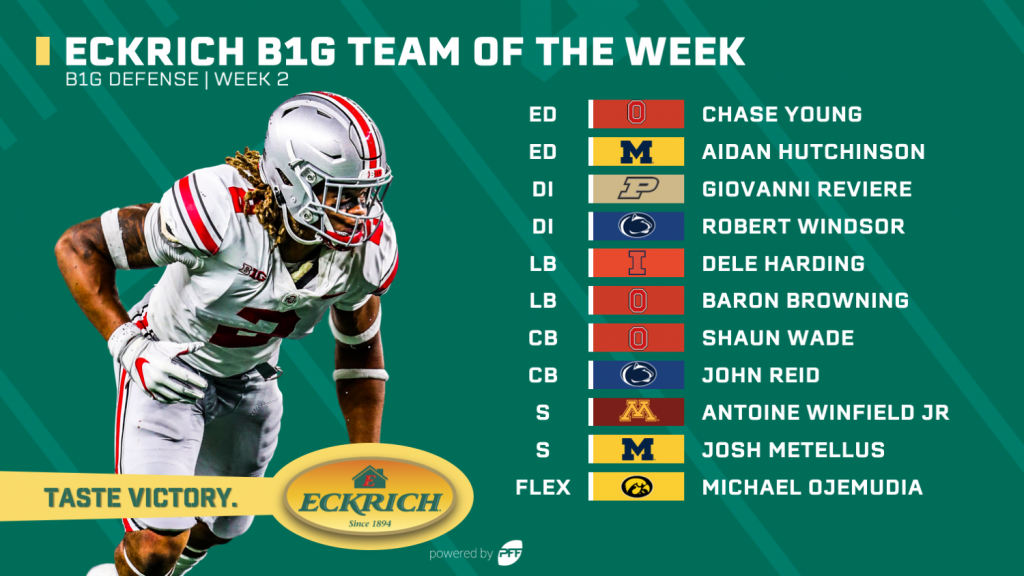 Young's afternoon was catapulted by an impressive field goal block and he finished the day with four pressures including a sack. He made an additional run stop and several more wins in the pass-rush game without pressure recorded due to a quick pass.

Hutchinson's sack in overtime ultimately won the game for the Wolverines against Army but he had a strong overall game all four-plus quarters. He finishes with eight total tackles, three defensive stops and not a single missed tackle.

The Boilermakers got a strong performance from Reviere on the pass-rush, finishing the game with six total pressures including a sack. He recorded five more hurries from the interior of the line as he was a force all game long.

Leading the way on defense for Penn State's front-four, Windsor's all-around performance was terrific as he registered three pressures, four defensive stops and six total tackles without a missed attempt.

Browning saw extensive action in the game against Cincinnati, registering three hurries on eight blitzes. He recorded three defensive stops, one in coverage as he was targeted just once and allowed a mere three yards in the passing game.

On five targeted passes against Cincinnati, Wade allowed just one reception for 14 yards and had two pass breakups. Impressively, he rushed the passer on two blitzes from his cornerback spot and got home with a sack to round out his day.

Reid's pick-six spurned the Nittany Lions' dominant second half against Buffalo as he finished the game with a 20.1 passer rating allowed on six targets into his coverage. He also recorded a QB hurry on his lone blitz and had two defensive stops.

Winfield made his way to the National Team of the Week with his strong performance that saw him get home with two pressures on his two blitzes including a sack as well as intercepting one of the two passes targeted his way. It was an all-around strong game from the Gophers secondary and Winfield was the star.

Metellus was extremely strong in run defense against Army's option attack as he came down with three defensive stops. In coverage as well, he was targeted twice on the seven snaps he played against Army's passing attack, not allowing either to be caught.

The Hawkeyes got a strong performance from Ojemudia as he was targeted four times in coverage and didn't allow a reception. He nabbed an interception and a pass breakup to boot as he was extremely strong in coverage all game long.