The Georgia Bulldogs continued their recent dominance over Florida with their third straight in Jacksonville. The remainder of the conference slate saw the favorites victorious in each contest, as Auburn, Texas A&M, Mississippi State, Tennessee and South Carolina all got victories.

Now, most of the south and country will be fixated on Tuscaloosa as Alabama hosts LSU in what will invariably be the first No. 1 vs. No. 2 regular-season matchup since the same teams met in November 2011. Before we dive into all angles of the Tigers vs. Tide and the remainder of the conference slate, we take a last look back at the best performances from Week 10 in the SEC. 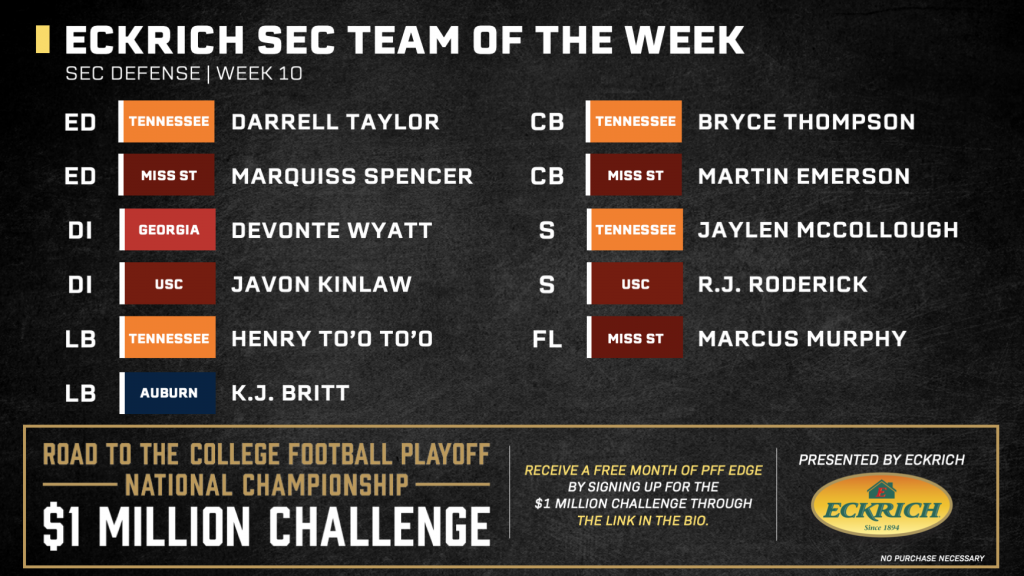 Jake Fromm did what he’s done his entire career against Florida – play well and lead the Bulldogs to victory. This year, in his third straight victory over the Gators, he did the majority of his damage on third down. For the game, Fromm was 10-of-13 for 119 yards and a touchdown and an 85.9 passing grade on third down, including the game-clinching completion to tight end Eli Wolf.

Hill was borderline unstoppable against the severely struggling Razorbacks. He finished the game with 228 yards rushing at a 10.9 yards per attempt, including six missed tackles forced, four runs over 10 yards and three touchdowns. His performance also put him on the PFF national team of the week.

Spiller was the highest-graded offensive player in their win against UTSA. Spiller carried the proverbial load, with 20 carries for 217 yards and three touchdowns. He got 142 of his 217 yards after contact, forcing three missed tackles and also collecting four runs of 10-plus yards.

Edwards was targeted early and often and completely dominated Vanderbilt. On the day, he caught 14 of his 15 targets for 140 yards and a touchdown. In addition, he forced two missed tackles and had a 127.8 passer rating when targeted.

Cager returning was enormous for the Bulldogs, as the graduate transfer from Miami put up one of the best statistical performances of his career. In all, Cager hauled in seven receptions on eight targets for 132 yards, a touchdown and a perfect 158.3 passer rating when targeted. Cager has also now caught 10 of his 12 ‘contested’ targets, good enough for the best contested-catch rate in all of the FBS for receivers with at least eight contested targets.

Jennings continues to produce at a high level for the Volunteers. The senior was again their highest-graded offensive player, catching five of seven targets for 70 yards and forcing two missed tackles.

The freshman tight end is getting better each week, and he posted the highest receiving grade of his young career this past weekend. Against UTSA, Wydermyer caught all four of his targets for 52 yards, a touchdown and a perfect passer rating (158.3) when targeted.

Thomas was his normal dominant self, except this time against Florida’s strong edge defender duo of Jonathan Greenard and Jabari Zuniga. Thomas was the Bulldogs’ highest-graded run blocker and also only allowed one quarterback hurry (against Greenard) in 36 pass-blocking snaps.

Getting Kindley back healthy for the Florida game was huge for Georgia. Kindley and Andrew Thomas together on the left side is a nightmare for opponents. In addition to his 74.7 run-blocking grade, Kindley did not allow a single quarterback pressure in 36 pass-blocking snaps.

Williams was the highest-graded run-blocking lineman for the Bulldogs in their route of Arkansas. In addition to helping to pave the way for the team’s over 450 yards on the ground, Williams did not allow a single quarterback pressure on his 22 pass-blocking snaps.

While Harrell did allow two quarterback pressures on 46 pass-blocking snaps, he was dominant in the run game and led the Tigers in run-blocking grade.

While he didn’t start, Broeker played the most snaps at left tackle (39). In all, he only allowed a single quarterback pressure on 17 pass-blocking snaps while also posting the Rebels’ highest run-blocking grade. 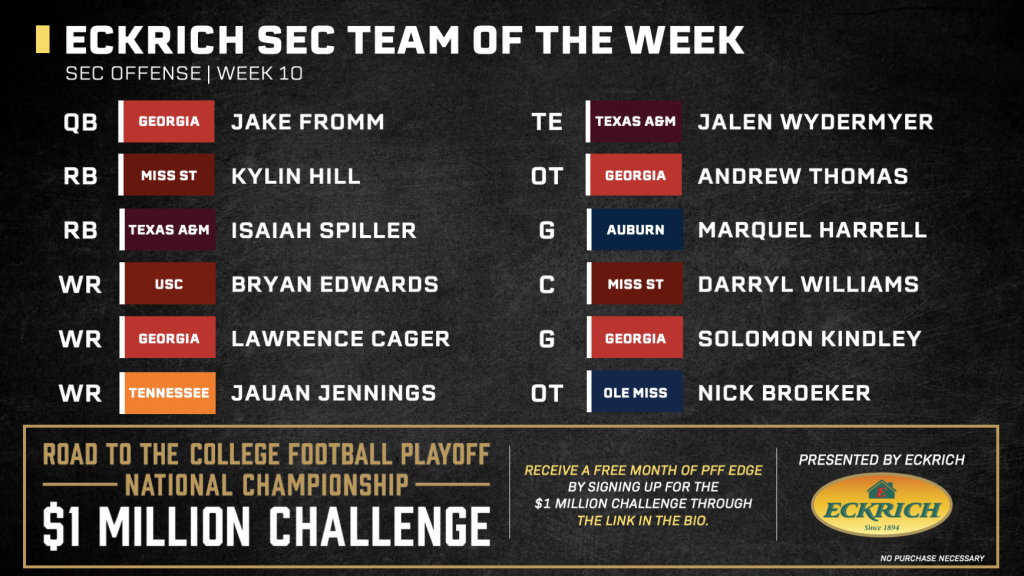 Taylor makes his second straight appearance on the SEC team of the week, as he’s been the Volunteers’ most consistent force on the edge. Against UAB, Taylor had four total QB pressures, including a sack and two stops.

Spencer turned in his most productive game of the season on the edge. In addition to two stops in the run game, he collected six total quarterback pressures.

Wyatt was the Bulldogs’ highest-graded defender and continues to put consistent pressure on the quarterback. He finished the game with two quarterback pressures and is second on the team with 18 total QB pressures despite not yet recording a sack.

While Kinlaw was not his dominant self from a statistical standpoint, collecting a stop and quarterback hurry, he still was the Gamecocks’ fourth-highest graded defender and disruptive.

To’o To’o was solid in every phase, finishing with four stops and zero missed tackles as the Volunteers almost shutout UAB.

The physical linebacker was Auburn’s highest-graded defender. Britt got five stops in the run game and a pass breakup on the lone target he received in coverage.

Thompson had himself a day against UAB, tying a Tennessee single-game record with three interceptions and also claiming a spot on our national team of the week. In addition to the interceptions, he only allowed three receptions on six targets for just 11 yards and collected a stop and quarterback hit.

Emerson was the Bulldogs’ highest-graded defender, allowing only one reception on three targets for 10 yards and also collecting a pass breakup. In addition to his 43.8 passer rating allowed, Emerson had a stop and a forced fumble.

Though he didn’t get the interceptions his teammate Bryce Thompson did, Mccollough was just as stingy in coverage. He allowed only one reception on three targets for six yards and collected a pass breakup and quarterback hurry on a blitz.

Roderick was South Carolina’s third-highest graded defender, finishing the game with an elite coverage grade. He collected an interception and only allowed one reception on his other target for just two yards and a 16.7 passer rating into his coverage.

Murphy intercepted a pass that he returned 32 yards for a touchdown and also pitched a shutout when targeted, not allowing a reception on the four targets into his way.