Dabo Swinney said Ohio State was going to be a quick watch because of their lack of available game film. After last night's 49-28 debacle in New Orleans, we can ask the question: Did Clemson watch any Buckeye film? The Ohio State offense did whatever they wanted through the air to the Tigers with Justin Fields putting together his best game ever in the upset win.

Let’s start with the praise. The Bucks' EPA per play on passes was .93 — almost one unexpected point added per pass. It is by far their highest mark in the last six seasons, with a 2017 game at Nebraska coming in second at .89. That .93 was the 10th-highest in a single game this season. As for Clemson’s defense, it was their worst day in a very long time. Over the last six seasons, nothing even remotely comes close to them allowing .93 EPA per play. The second highest is Alabama in 2015 with only .43. In fact, in these six years, Clemson has only given up positive EPA per play via the pass 17 total times in 82 games. It’s almost like Clemson forgot to actually watch Ohio State’s film, regardless of how many games the Buckeyes played.

The Tigers had trouble lining up all night with Ohio State’s tempo giving them fits. A long Trey Sermon touchdown run early in the game was quick out of the gates because Clemson didn’t have any players on the left side of Ohio State's formation when the ball was snapped. The Tigers also found themselves covering a lot of unused grass. There are plays where more than a few Tiger defenders are in the same general area all the while Buckeye receivers fly around the field in more open areas.

Credit to Ryan Day and his coaching staff for putting together a nice game plan. Using the fast tempo to create confusion against Clemson’s three-high safety defense. That was the defense that gave Fields fits in last year’s semi-final. Not this year. Fields toyed with whichever safety was in the middle of the field and deep. This is where the game was won and lost. If the deep middle of the field was open, FIelds took it in stride and delivered bombs time and time again. If it was closed, Fields checked the ball down to his running back who still picked up the first down and kept the drive alive. Touchdown to Checkdown.

In this case, the middle of the field being open or closed has less to do with the actual structure of the defense and more to do with how that deep middle player was clinging to routes. Ohio State hit deep post routes against so-called “middle of the field closed” defenses because the safety — the post safety — had his eyes focused on other players. So many of Ohio State’s explosive plays came from either the middle player not getting enough depth or choosing the wrong receiver.

Before we continue with our praise for Fields and the OSU receivers, let’s talk about the protection. Cumulatively, this was the Buckeyes' highest-graded game for pass protection at 81.6. They allowed five pressures on 34 pass-blocking plays. Against Brent Venables' famous blitz package, they only allowed two pressures on 10 blitzes. The offensive line kept Fields upright, which was important after he sustained what looked to be a potential game-ending injury.

It didn’t matter what concept Ohio State called in their passing game, although Y-Cross showed up quite a bit. Fields just took advantage of the deep middle player. Teams had not really attacked Clemson in this area of the field the whole season. 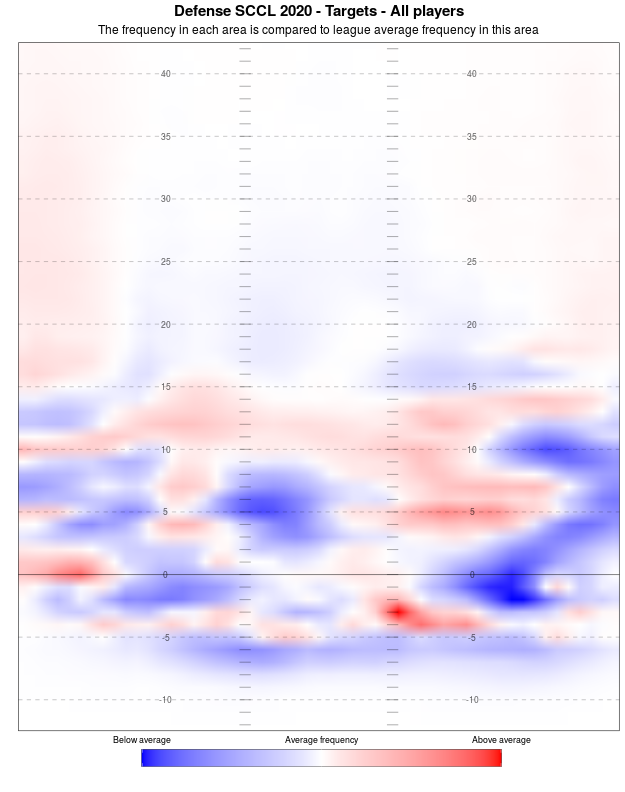 The Chris Olave touchdown in the third quarter to put a fork in Clemson is a great example of this:

60+ yards in the air DOT from Justin Fields. I wouldn’t let Chris Olave fall out of the top 32 picks. pic.twitter.com/gr95chfYMv

Ohio State is running Y-Cross here and FIeld looks to the right first. He’s looking to see if his outside receiver can win vertically or find a hole in cover 2. Neither happens here. He moves his eyes back to the middle for his “cross” route but sees the middle of the field safety staying too shallow and stopping his feet. Fields unloads on the backside post route, which I might add, was open the whole game because of defense like this. It’s true that Ohio State runs y-cross a lot to hit the deep crosser, but Fields has shown time and time again that he will come all the way back for the backside post for a big play. Clemson needed to play deeper.

This was a dominating performance from the coaching staff down to the players executing their vision on the field for Ohio State but one has to ask the question about Clemson’s defense. They’ve never been demolished like this before, and that makes back to back games in the Superdome that they’ve looked like the 2015 New Orleans Saints and not their usual selves.

Fields, on the other hand, was spectacular. He was accurate, made smart decisions and carried his team even though it looked like his internal organs turned to mush. His elite play gives him another chance to cement his legacy as one of the best Buckeye quarterbacks ever next week against Alabama and maybe become the first quarterback off the board in next April's NFL draft.