College Football: Derek Stingley is PFF's Freshman of the Year

The future of the college football landscape is set for the foreseeable future after the world saw glimpses of some star true freshman during the 2019 NCAA football season. While some saw glimpses and some players flashed elite-level talent, one player dominated college football's most difficult conference and put forth multiple games of elite grades to be crowned our Freshman Player of the Year, and that was LSU CB Derek Stingley Jr.

Stingley made waves early in his true freshman season by locking down Texas WR Collin Johnson only to have the casual fan think he was an average cornerback when he lost a few battles against the vaunted Alabama passing attack with Tua Tagovailoa at the helm. Still, including the Alabama game, Stingley is the highest-graded Power-5 cornerback in the country, not just among true freshman. 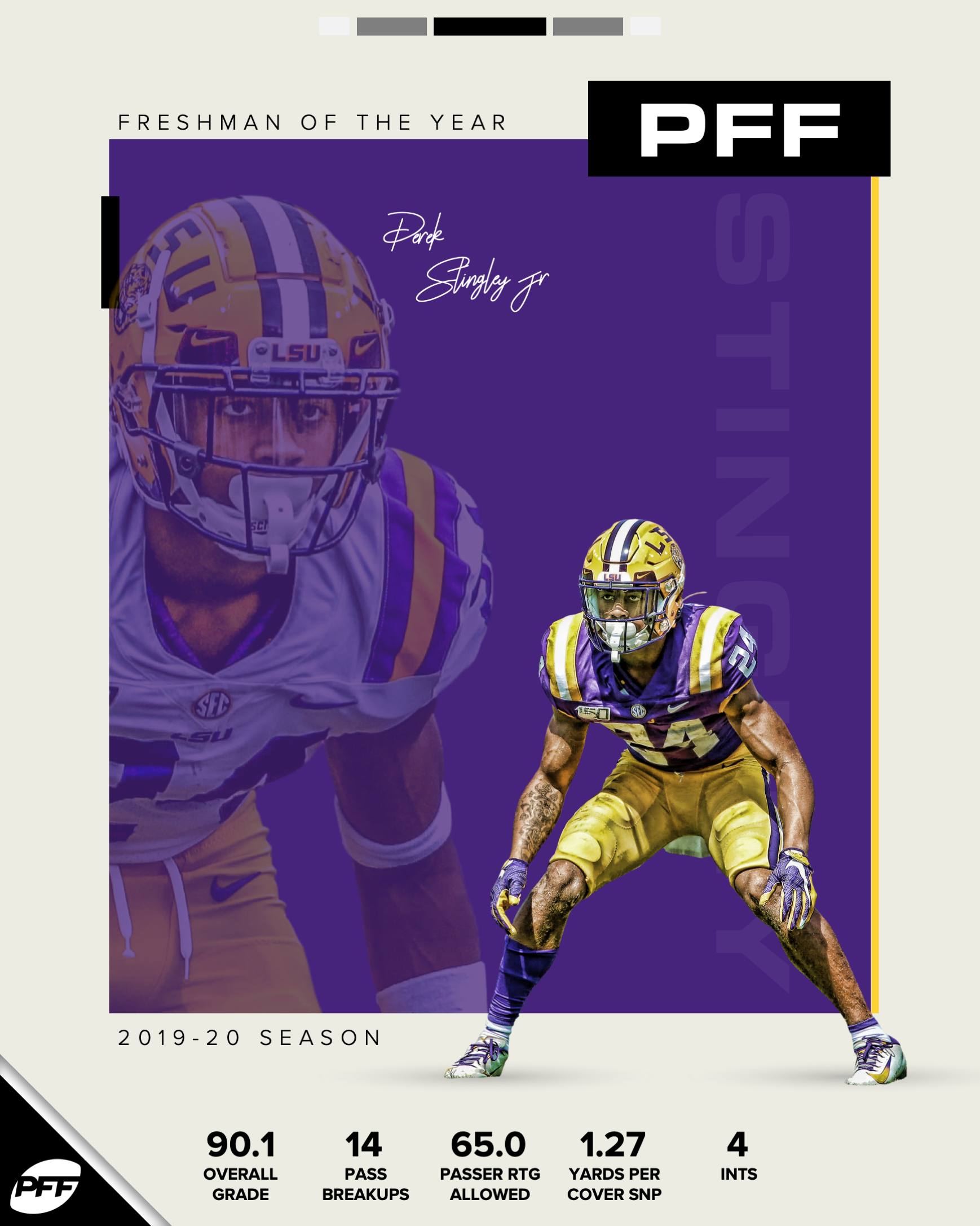 All season long, Stingley gave up just 29 receptions, seeing 69 targeted passes come his way. He limited quarterbacks to just a 42.0% completion percentage into his primary coverage, and even though he gave up yardage to opposing team's No. 1 WRs, he still did his part in limiting the big plays outside of the Alabama game. In fact, if you take away the Alabama game and the much-talked-about moment where he was clearly still receiving instructions from his coaching staff when Alabama launched a go route on him, Stingley allowed only two receptions longer than 26 yards in his coverage all season long. And one of those was even a throwaway pass from Bo Nix that Seth Williams made an incredible leaping grab along the sidelines that certainly is in the ballpark for catch of the year consideration.

As good as he was all year long, and even in times during the Alabama game, Stingley showed resilience when needed. A key trait for any football player is the ability to have a short memory when things don't go your way. It's integral for a quarterback after an interception. It's perhaps even more important for a defensive back after allowing a touchdown. To be able to block out those bad moments and focus on your skill and ability that had gotten you as far as it has is something unquantifiable and something that Stingley possesses.

After the Alabama game in which he allowed 211 yards on five catches, Stingley finished the final three games of the regular season by allowing just four catches for 26 yards on 14 total targeted passes. He held receivers to only two yards after the catch and made four pass breakups to boot.

That really sums up his entire season, as Stingley would bounce back incredibly well not just from a bad game but also from a bad rep or bad play to put forth an elite-level play just moments after. After allowing 103 yards against Florida, Stingley didn't allow a catch against Mississippi State and allowed only two receptions against Auburn in the two following games. After allowing a touchdown against Northwestern State, he recorded an interception in three straight games following. It's been a tale of terrific play with a few minor lapses that have dominated Stingley's first season.

Fortunately for LSU fans, it's been far more of the terrific, positively graded plays than it has been the negatively graded outcomes.

The more impressive part of it all is who he's been tasked with guarding and how positively he has fared against them all.

Here's how he stacked up against all receivers this year:

Stingley possesses elite coverage skills and he put that to good use against the wide variety of players and player skill sets that he was tasked with in his debut season.

He can cap an incredible first season with an SEC Championship and potentially a National Championship, as the sky is truly the limit for Stingley.