How Florida can stop the LSU passing attack on Saturday

The midseason rivalry week is upon us, lesser known than that of the official ‘rivalry week' but nonetheless, Week 6 pits many of college football's biggest teams against one another as Florida State and Miami clash, Oklahoma and Texas showdown and no love is lost between Florida and LSU.

For the Florida Gators, this game against the Tigers is all about asserting themselves as once again a power in the SEC. How do they stop the high-flying LSU offense of late though?

This Florida feature is brought to you by Eckrich, the Official Smoked Sausage of the Florida Gators.

While the Gators were able to get a win against Mississippi State last week, 13-6, a group of players that showed up big-time during Dan Mullen's triumphant return to Starkville was that of the secondary, more specifically, the safeties. They'll have to ride this momentum as they have a tall task ahead this weekend with the now-prolific LSU passing attack led by Joe Burrow coming to town.

The first name to know in defending the LSU passing attack is Brad Stewart Jr. You likely remember his acrobatic interception against Tennessee a couple weeks ago and so far in 2018, Stewart has tallied an impressive 84.6 overall grade on 173 total snaps. Stewart is not only the third-highest graded player on the team, but he's also the third-highest graded safety in the SEC. Against Mississippi State, Stewart didn’t allow a catch in coverage and had one pass breakup as he now has limited opposing receivers to 1.22 yards per snap he's spent in coverage. 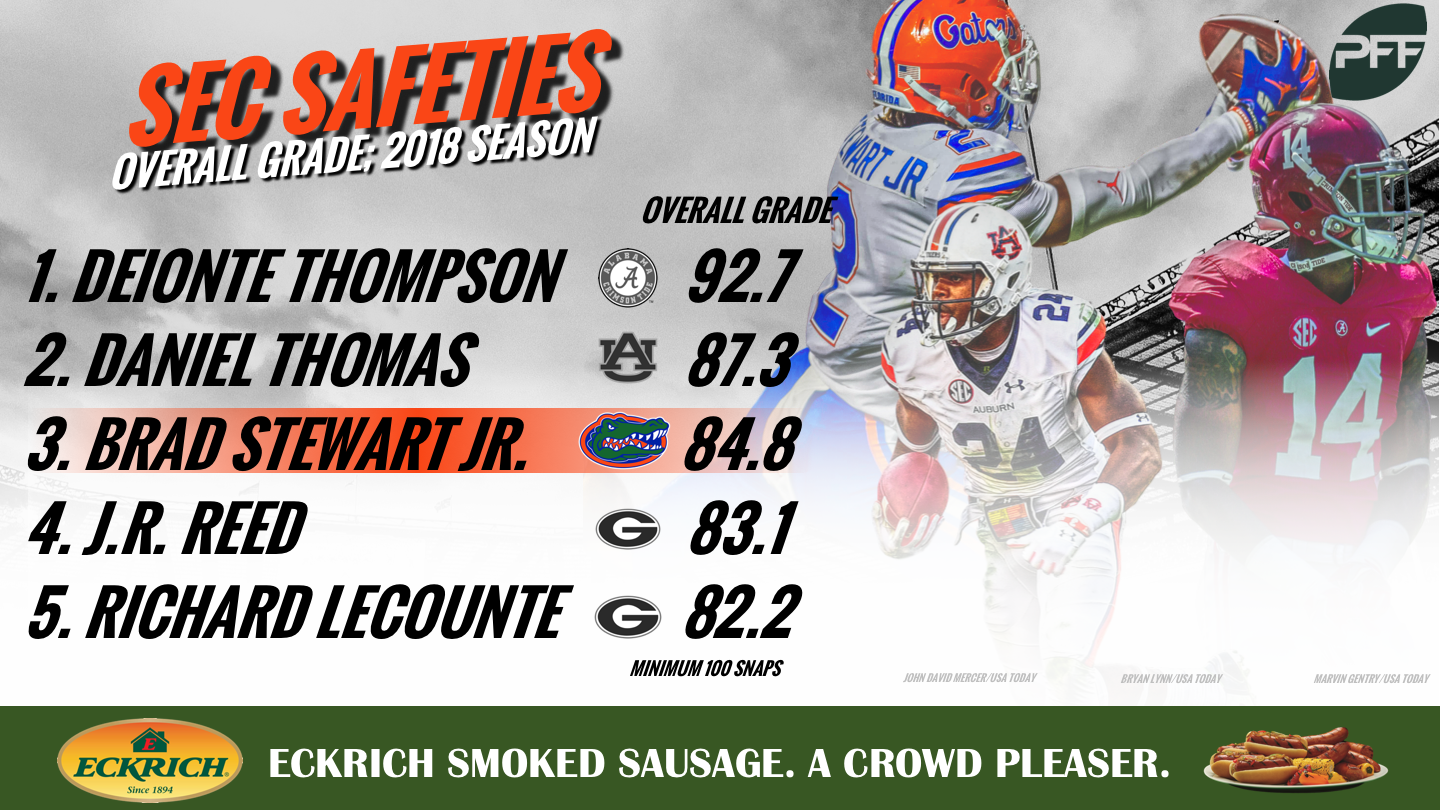 Donovan Stiner made a name for himself by leveling Nick Fitzgerald to seal the win last weekend at Mississippi State, and coincidently he is another athletic safety in the Florida secondary. Through 246 snaps, Stiner has registered a 67.8 grade and leads the safeties in passer rating allowed at 81.9 while he's only surrendered 0.20 yards per cover snap, second best in the SEC.

The last Gator that has seen significant playing time on the backend is Jaewon Taylor, totaling 179 snaps. Taylor will likely need to improve in coverage, however, to see more time on the field against the Tigers.

Overall, it appears that QB Joe Burrow has solved the woes that the Tigers have experienced over the last several seasons at the quarterback position. They have always had a stout defense and a pounding ground game but Burrow gives them a real threat through the air. The key for the Gators this weekend is to get pressure on Burrow. He has been pressured on 34.9% of his dropbacks and has a passer rating of 47.4 on those throws as he has yet to throw a touchdown under duress. However, when Burrow is kept clean, he will pick you apart, as noted by his 115.6 passer rating, 73.8% adjusted completion percentage and a 6:0 touchdown to interception ratio.

Burrow has had to deal with five different starting offensive line combinations over the first five games, pointing to the high amount of pressure he sees as the LSU front will be thrown right in the fire against some of the best edge rushers in the SEC. Jachai Polite (17 total pressures) and Jabari Zuniga (15 total pressures) could both have strong games against the Tiger tackles as continuity along the offensive line remains an issue for LSU. They have a collective 90.3 pass-blocking efficiency mark and have allowed 27 pressures in the first five games. 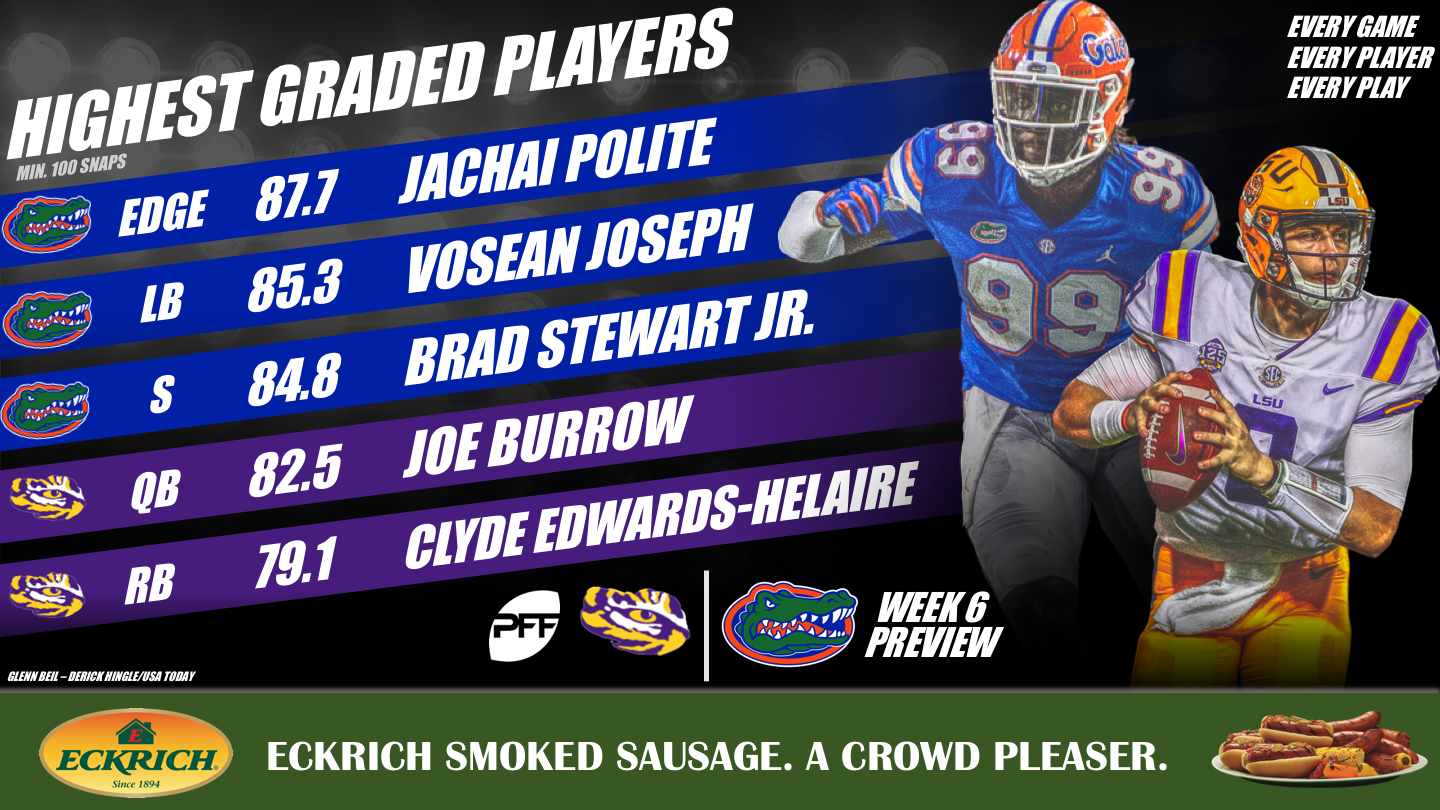 The Gators are 4-1 and have matched their win total from the 2017 season already. The LSU game on Saturday will mark a pivotal matchup for them and for the Tigers as each look to cement their status as powerhouses in the SEC at the half-way point of the 2018 season.