After grading and analyzing every player on every play of every game during the 2018 college football season, it’s time to unveil the 2018 PFF All-American first team, second team and honorable mention for every position on offense and defense as well as for the first time ever, specialists.

The 2018 All-American Team is brought to you by Eckrich, the Official Smoked Sausage of the College Football Playoff. 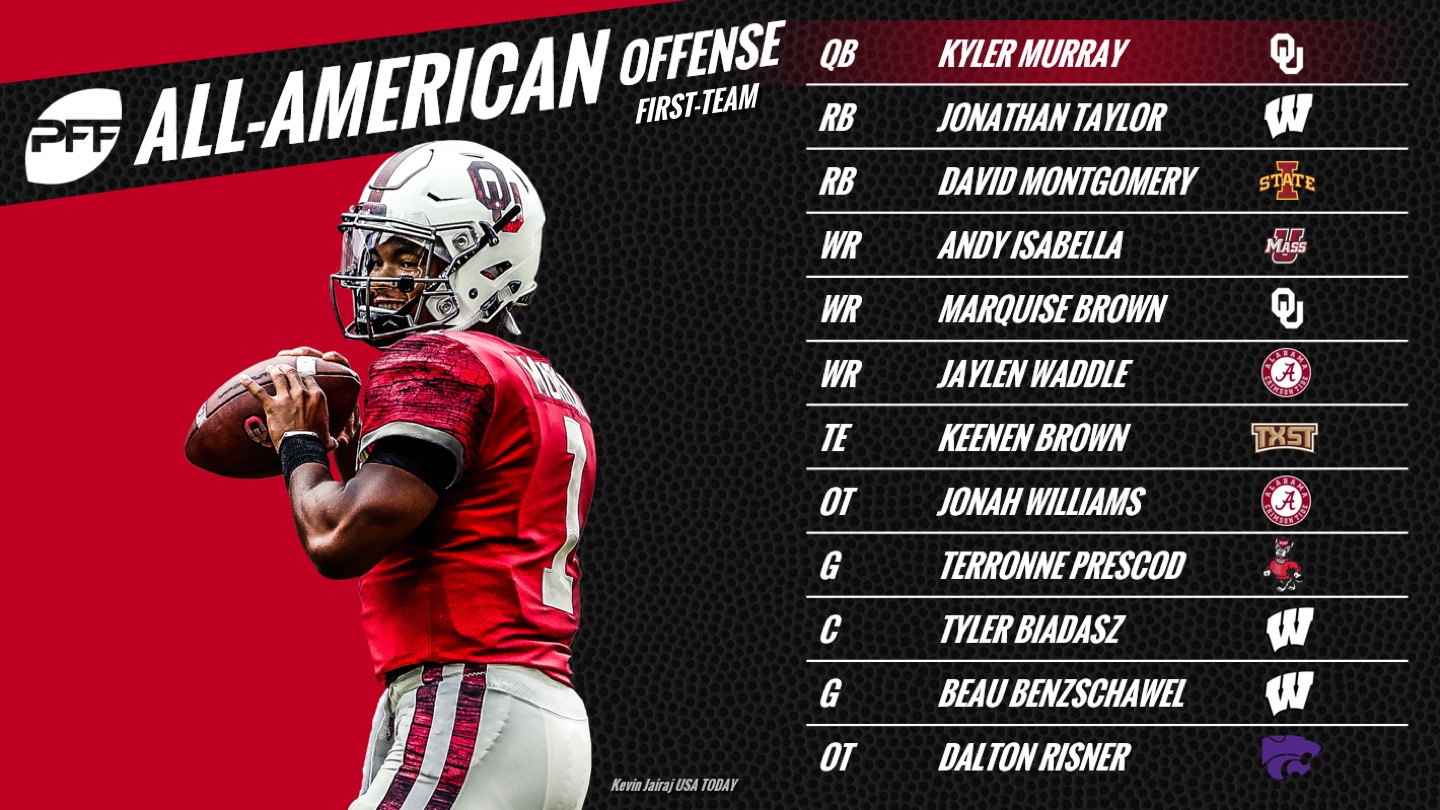 There was no better receiver on the end of deep passes this season as Isabella dominated at UMass. Case in point, even against Georgia's talented secondary, Isabella hauled in 15-of-16 targets for 219 yards and two touchdowns.

The speedster Brown was fourth in the nation with an impressive 3.90 yards per route run average this year, hauling in multiple deep-pass, highlight-reel touchdowns.

The true freshman dominated in Alabama's new-found offensive prowess, hauling in 41 receptions for 803 yards, catching 73.2% of passes thrown his way this season. His 139.9 passer rating when targeted was good enough for seventh among all FBS receivers with at least 50 targets.

No tight end had the success Brown did after the catch this year as he more than doubled the next closest tight end with 24 missed tackles (Trevon Wesco had 11 to finish second). He also finished with the seventh-highest run-blocking grade among FBS tight ends.

Williams' overall grade topped all offensive tackles this season as he allowed just nine pressures on 410 pass-blocking snaps. His run-blocking grade of 85.4 also paced all FBS tackles as he was dominant in all facets.

Prescod finished the 2018 regular season with the highest overall grade (85.7) among all offensive linemen as he allowed just six hurries on 342 pass-blocking snaps. His 86.2 run-blocking grade was 4.1 points higher than the next closest offensive lineman.

Benzschawel anchored the Badgers line with Biadasz as he allowed just seven QB pressures on 328 snaps in pass protection. His 83.8 run-blocking grade was 2.0 points higher than the next closest and second only to Prescod among guards.

The legend of Risner at Kansas State continued this year as he didn't allow a sack for the second straight season and he has now allowed just one in 1,489 career pass-blocking snaps. 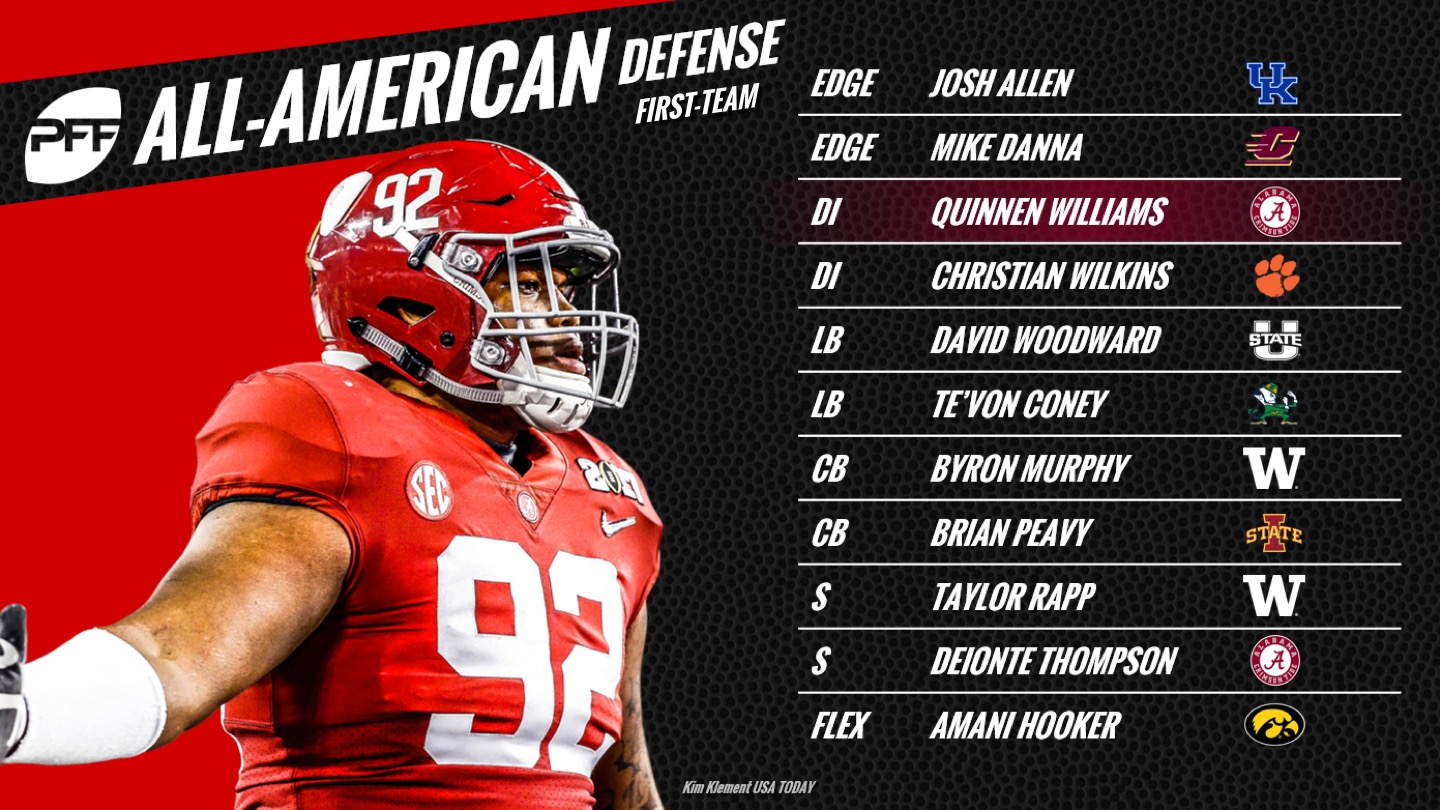 The highest-graded edge defender in the country, Allen was unstoppable on the pass-rush this season. Highlighted by his national-best 93.5 pass-rush grade, Allen brought in 51 total pressures that included 14 sacks, nine QB hits and an additional 28 hurries. Rounding out his game, he dropped into coverage on 141 snaps and allowed just 130 yards on 19 targets without allowing a touchdown.

Danna may not be as flashy as others on this list, or even in his conference, but he constantly changed games for the Chippewas this season. He recorded 54 total QB pressures and 53 total tackles while missing only four attempts this year.

No defensive player graded as well as Williams did this season as he was dominant in every contest. He racked up 43 total QB pressures including a ridiculous 24 combined sacks and QB hits that tied for the national lead among interior defensive linemen. His 48 defensive stops were seven clear of the next-best defensive interior as he constantly wrecked opposing offensive schemes.

Wilkins not only leads the ACC's interior defensive linemen in total pressures (36), he also led them in sacks (six) and finished second in hits (nine) and forced fumbles (two).

The nation's surest tackler, Woodward flew all over the field for Utah State this season. Racking up a ridiculous 108 tackles, he missed just three attempts while also bringing down 49 defensive stops and 20 QB pressures on just 100 pass-rushes.

Coney proved vital to the Fighting Irish defense this season, both prowling the middle of the field with solid tackling skills but also in coverage. On 421 coverage snaps, Coney was targeted 35 times. He allowed just 18 receptions (51.4% catch rate) for just 132 yards and didn't allow a single reception over 23 yards.

Murhpy's overall grade of 91.9 and coverage grade of 91.9 both lead the nation's cornerbacks as he recorded the Pac-12 Championship Game's lone touchdown on a pick-six to put the exclamation point on his season.

On 387 coverage snaps, most of which came against pass-happy Big 12 teams, Peavy allowed under 50% of passes thrown his way to be caught (48.9%) and limited receivers to just 52 yards after the catch while breaking up seven passes and recording an interception of his own.

Rapp is a rare player with the ability to play any back-seven position if needed. He finishes the regular season as our highest-graded safety in the nation (91.4) and displayed his versatility with five sacks, two interceptions and five pass breakups.

Thompson made all the splash plays you'd expect from a top graded safety, and some plays you wouldn't think were possible. In total, he brought down 71 total tackles and allowed a 64.1 passer rating on 32 targeted passes.

Hooker dominated out of the slot for the Hawkeyes this season, spending 279 coverage snaps from an inside alignment. He was targeted 47 times and brought in three interceptions, tying for the national lead in interceptions from the slot.

Tracy did not miss an extra point in 2018, finishing a perfect 38-of-38 while he also holds the advantage in total field goal make percentage (86.2%) over Matt Gay of Utah. He connected on 9-of-12 field goals from at least 40 yards out and didn't miss a single attempt in the 20-29 yard ‘chip shot' range.

The nation's highest-graded punter, Mann knocked 29 of his 47 punts inside the opponent's 20-yard line and averaged the nation's best 45.0 net punt average. In total, he allowed 19 punts to be returned but averaged the third-highest hangtime at 4.34 seconds, relenting only 5.8 yards per return on average.

Jacobs finishes with the nation's highest overall returning grade and highest kick-return grade, averaging a whopping 30.6 yards per return. He returned 13 kicks for a staggering 398 yards and had a long of 77 yards and a touchdown.

Dortch returned 25 punts for 276 yards and two touchdowns, averaging 11.0 yards per return with only one muffed punt.