This list of 20 Stats to Know is brought to you by Eckrich, the Official Smoked Sausage of the College Football Playoff.

In a game moved up because of Hurricane Florence, Brown uncorked a whopping 10 deep pass attempts (passes targeted 20-plus yards downfield), completing six of them for 226 yards. His five deep pass touchdowns led the nation and his 143.8 passer rating ranked third among quarterbacks with at least seven deep pass attempts in Week 3.

Our National QB of the Week, Jackson was unfazed by pressure against Eastern Michigan. He completed all five pass attempts when under duress for 205 yards and three touchdowns. On the season, Jackson how now completed 11-of-17 passes under pressure for 267 yards and a 147.7 passer rating, the second among all FBS quarterbacks. 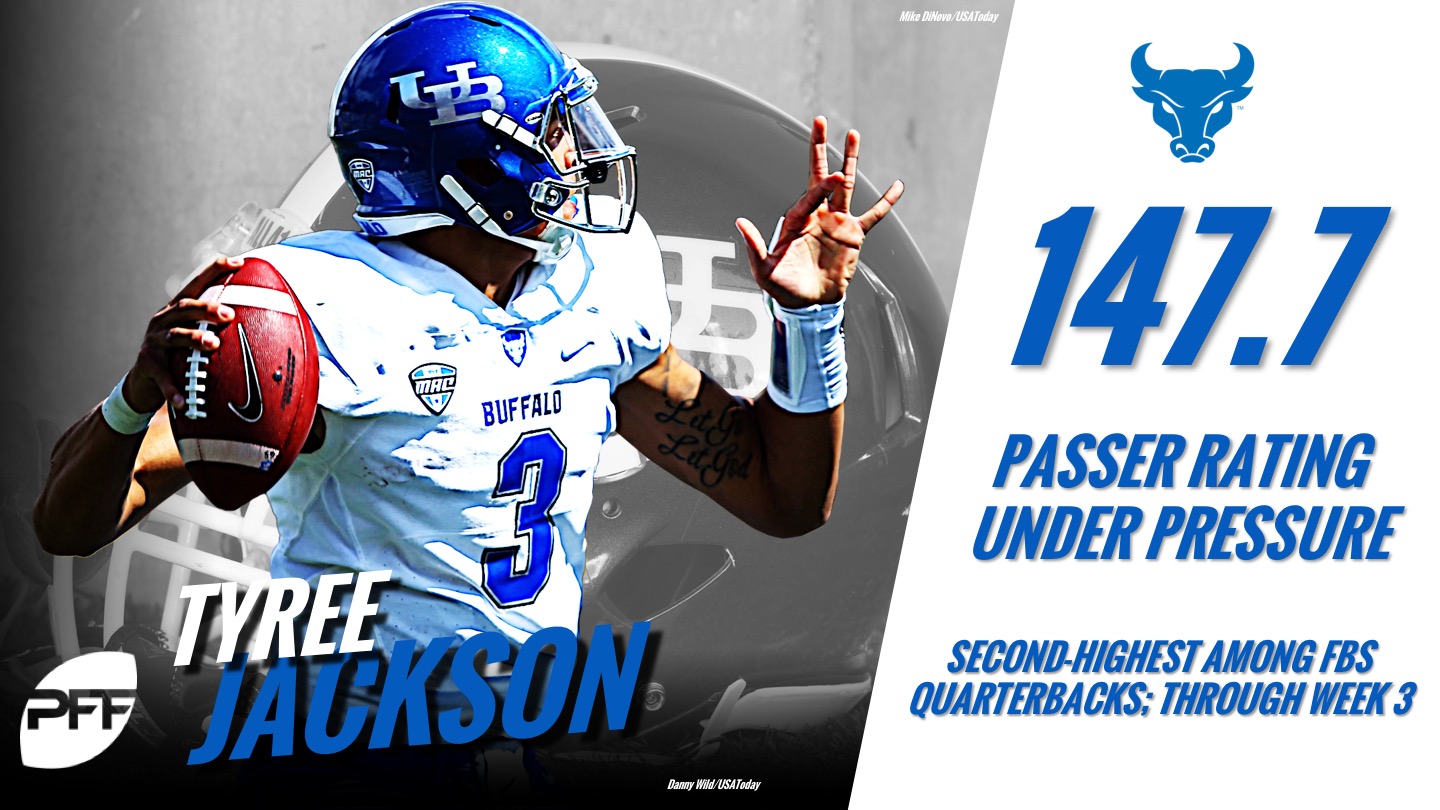 Three quarterbacks finished Week 3 with a perfect passer rating of 158.3 when kept clean from pressure as Murray, Perkins and Tagovailoa each were surgical from a clean pocket. Perkins led the trio by completing 22-of-25 passes for 335 yards while Murray tied Perkins with three touchdowns from a clean pocket. Tagovailoa, who played the fewest amount of snaps due to the blowout nature of their victory, completed 11-of-14 passes for 191 yards and two touchdowns.

Henderson, buoyed by his 61-yard touchdown run against Georgia State, averaged 12.93 yards after contact, per carry this week. He broke four tackles on just 14 carries and reached 200 yards rushing for the second consecutive week. 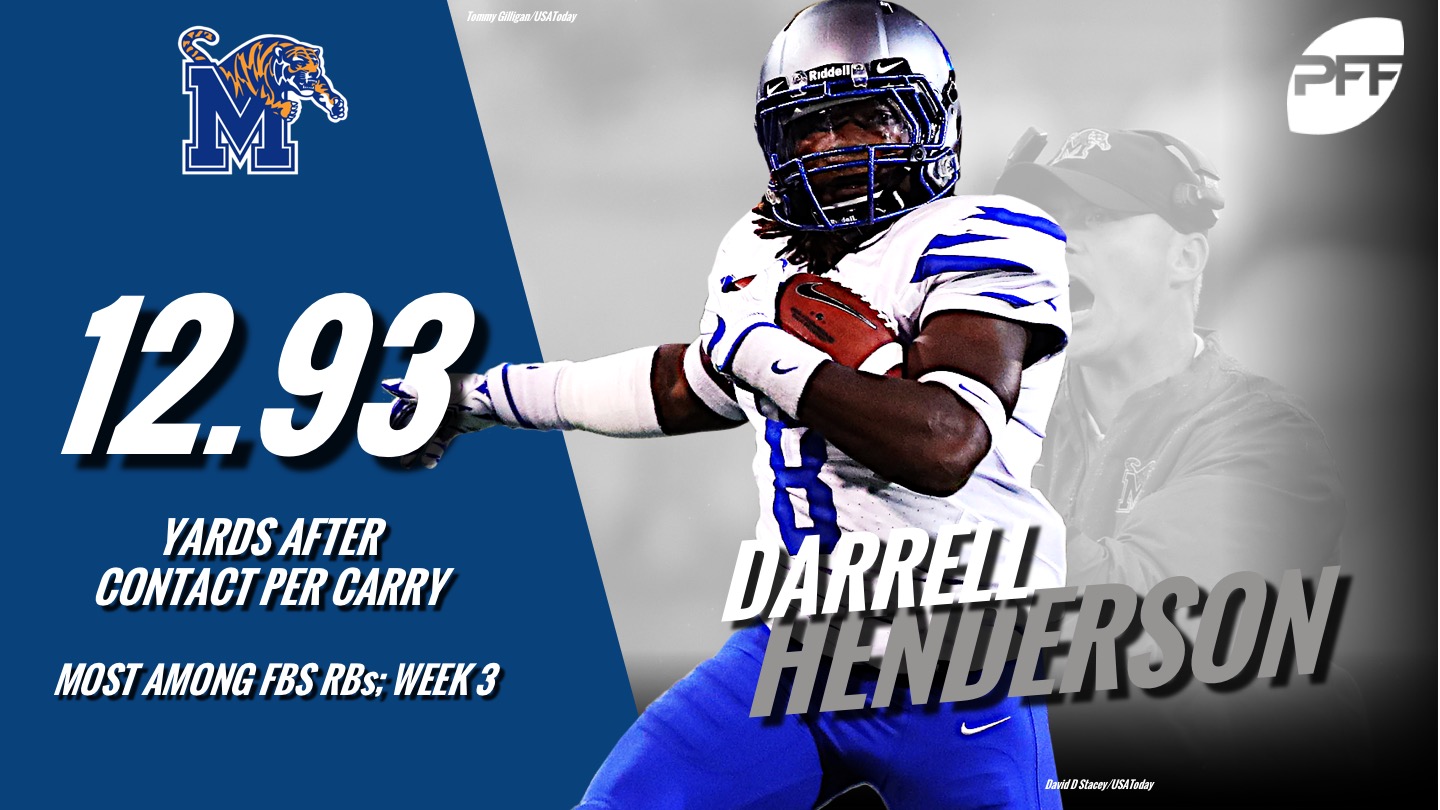 Zaccheaus earned a spot on our National Team of the Week for his efforts against Ohio, gaining a UVA-record 247 yards through the air. He hauled in 9-of-10 targets for two touchdowns and a perfect passer rating of 158.3 when targeted.

Osborn also earned a spot on our National Team of the Week, thanks in part to his 188 receiving yards on just 20 snaps in route. He gained 9.40 yards per route run, by far the highest among all FBS receivers in Week 3.

Compiling 11 targets from the slot receiver position, Stevenson paced all FBS receivers by accumulating 168 yards from an inside alignment. He did that on only six receptions and caught two touchdowns from the slot, tying the national lead in this week.

Gentry led all FBS tight ends by averaging 5.28 yards per route run this weekend. He turned five targets on 18 snaps in route into 95 receiving yards in the Wolverines' win over SMU.

Lucas not only logged the most pass-blocking snaps among all FBS tackles this past weekend at 68, but he also did so by not allowing a single QB pressure. His teammate, Andre Dillard, allowed just one pressure on the same amount of pass-blocking snaps.

Anderson led all the nation's guards by seeing 61 snaps in pass protection without allowing a single QB pressure. On the season, Anderson has seen 157 pass-blocking snaps and allowed just one single QB pressure this year. 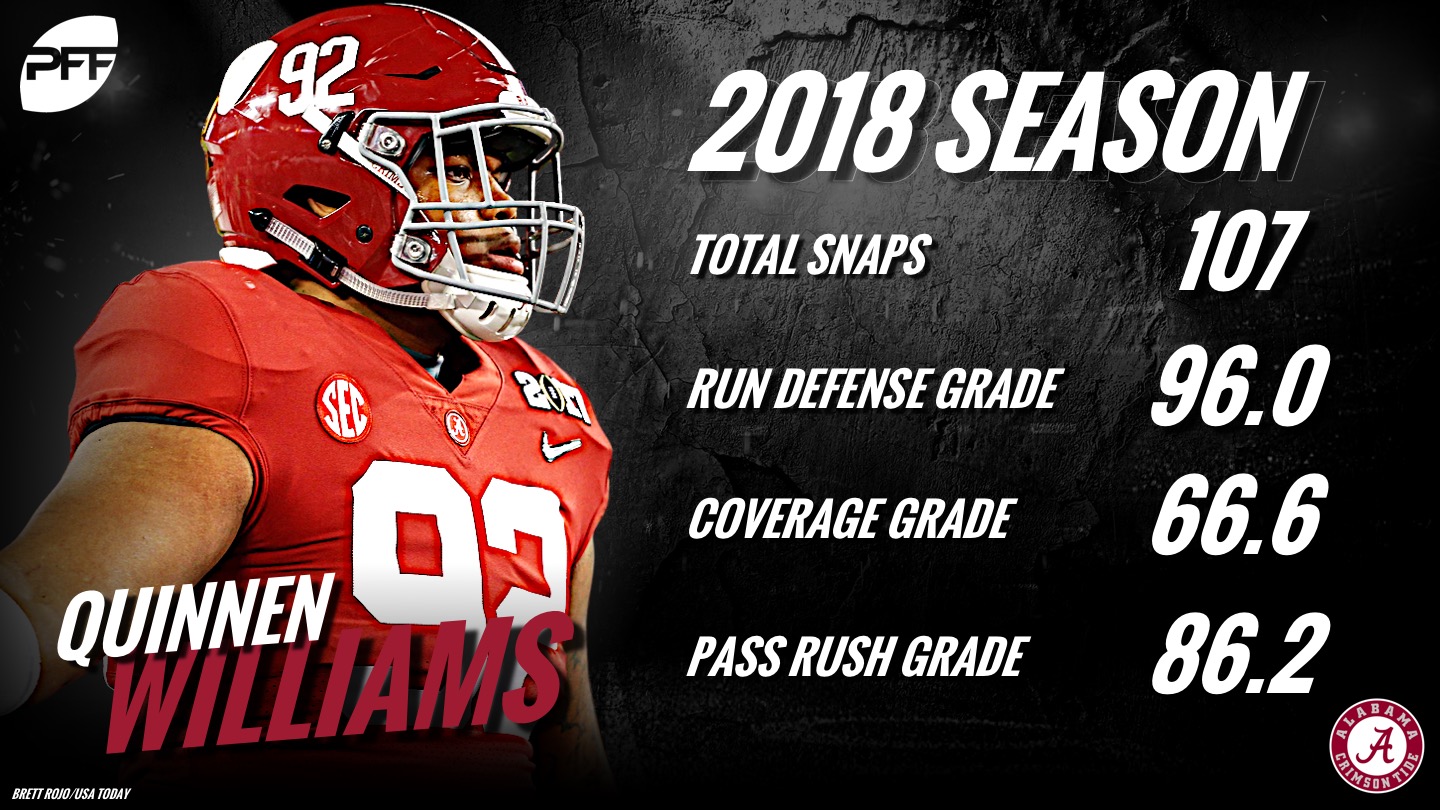 Turning 18 pass-rushing snaps into five QB pressures gave Johnson the highest pass-rush productivity among all FBS interior defensive linemen this weekend. Johnson recorded two sacks in the process, one behind the national lead at the position.

Beckner racked up a whopping seven total QB pressures on Saturday against Purdue from the interior of the defensive line. He needed 44 pass-rushing snaps to do so as he now has 11 total pressures on the season. 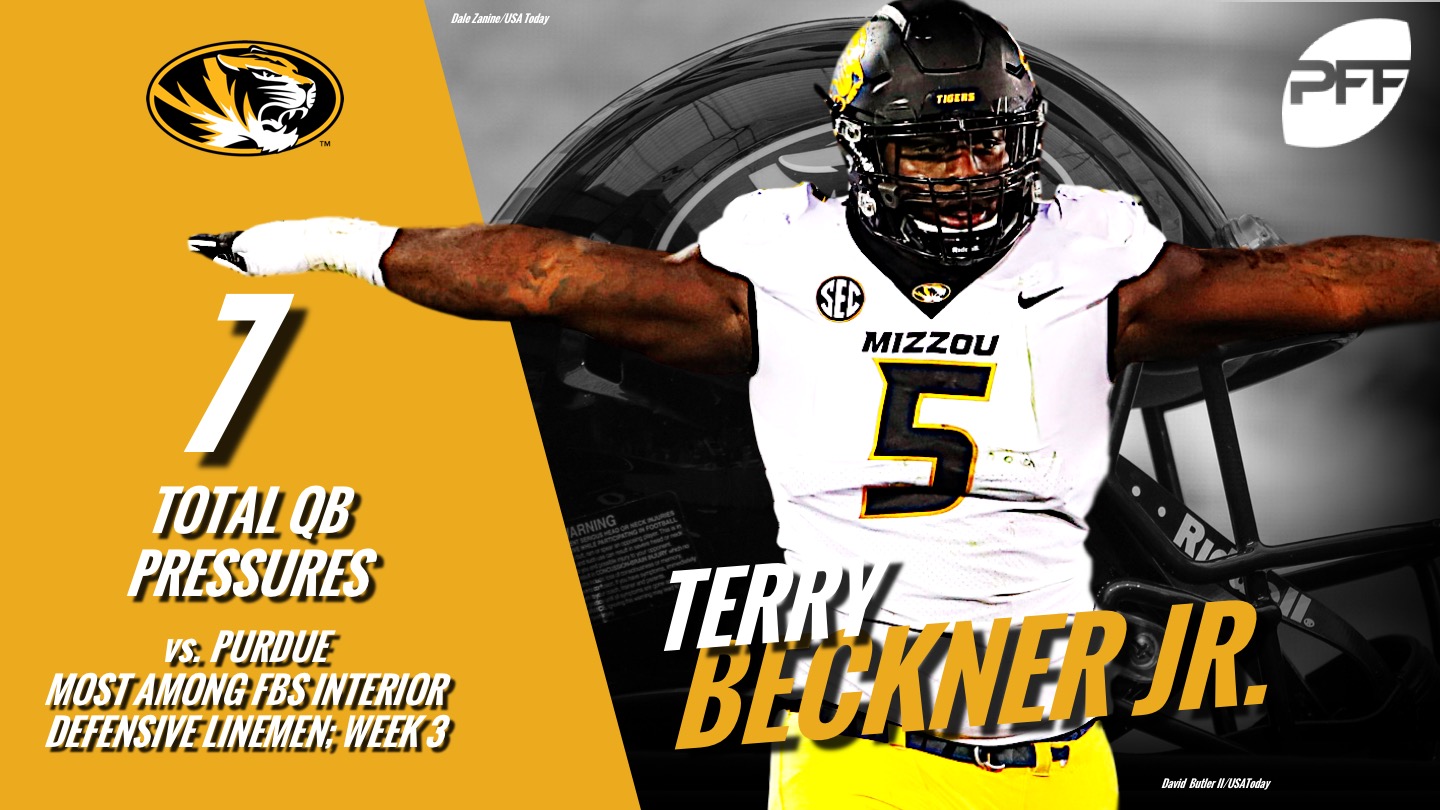 Fergurson spent 57 snaps in run defense against rival New Mexico's triple-option offense but he did so with great success, recording 11 run stops for an offensive failure. He brought down 18 total tackles despite one missed attempt as well for a 19.3 run-stop percentage.

Joining others from this list, Thompson saw a spot on our National Team of the Week by allowing a 0.0 passer rating on throws into his coverage. He was targeted five times, did not allow a single reception and came away with two interceptions in the process.

Among the seven cornerbacks who allowed a 0.0 passer rating on throws into their coverage, Brooks was the most targeted, seeing the football come his way on 10 passes as the primary coverage defender. Against Arkansas, however, he allowed just two receptions while bringing into two interceptions himself and not allowing a single yard after the catch in the Mean Green's upset win over the Razorbacks.

Savage, the Terrapins highest-graded returning player in 2018, lived up to his last name's sake on Saturday. He brought in a whopping seven stops in run defense, all seven of which came when he lined up in the box (within eight yards of the line of scrimmage).