With college football right around the corner, it’s time to dive into some of PFF’s favorite breakout candidates for the 2019 season. These are guys that have shown high-level play for flashes and are on the verge of putting it all together. The difference between breakout players and sleepers (which we’ll run next week) is that the breakout players haven’t quite done it yet for a full season while sleepers simply haven’t gotten their due.

This one might be cheating a bit, as Brewer has already ‘broke out’ grade-wise but didn’t finish in the top-35 among quarterbacks nationally in passing yards or passer rating last season. We think that’s going to change in 2019.  Brewer only managed a 19:9 touchdown to interception ratio, but the grades suggest a much more efficient quarterback. He earned a passing grade over 86.0 in five of the 10 full games he played in.

As a true sophomore in 2018, Walker played in nine games and only started for three. That was all he’d need though to rack up 714 yards and five touchdowns on the season. His 2.68 yards per route and 125.8 passer rating when targeted both ranked top-10 for second-year college players.

Bryant simply needs to stay on the field for a full season for the Huskies at this point. His 3.45 yards per route last season blew all college tight ends out of the water, but it came in only five games after returning from an ACL injury. Through two seasons, Bryant has yet to play even 200 snaps in a single year.

O’Grady was suspended by the team for the early part of the 2018 season. But when he came back, he quickly established himself as one of the best tight ends in college football. From Week 5 on last season, O’Grady racked up six touchdowns and 400 receiving yards.

We’ve been waiting for a full season from Cleveland for some time now. The much-heralded recruit was a bit player for the Bulldogs in 2017 as a redshirt freshman and impressed with a 72.0 overall grade. Cleveland earned the starting right guard job in 2018 and was lights out through the first four weeks of the season – not allowing a single pressure – before breaking his leg.

Somewhere towards the end of 2018, a switch inside Elliott flipped and he had a dominant stretch of play to end the season. In the first nine games of the season, Elliott racked up only 10 pressures. In the last two games of the regular season, he matched that total. 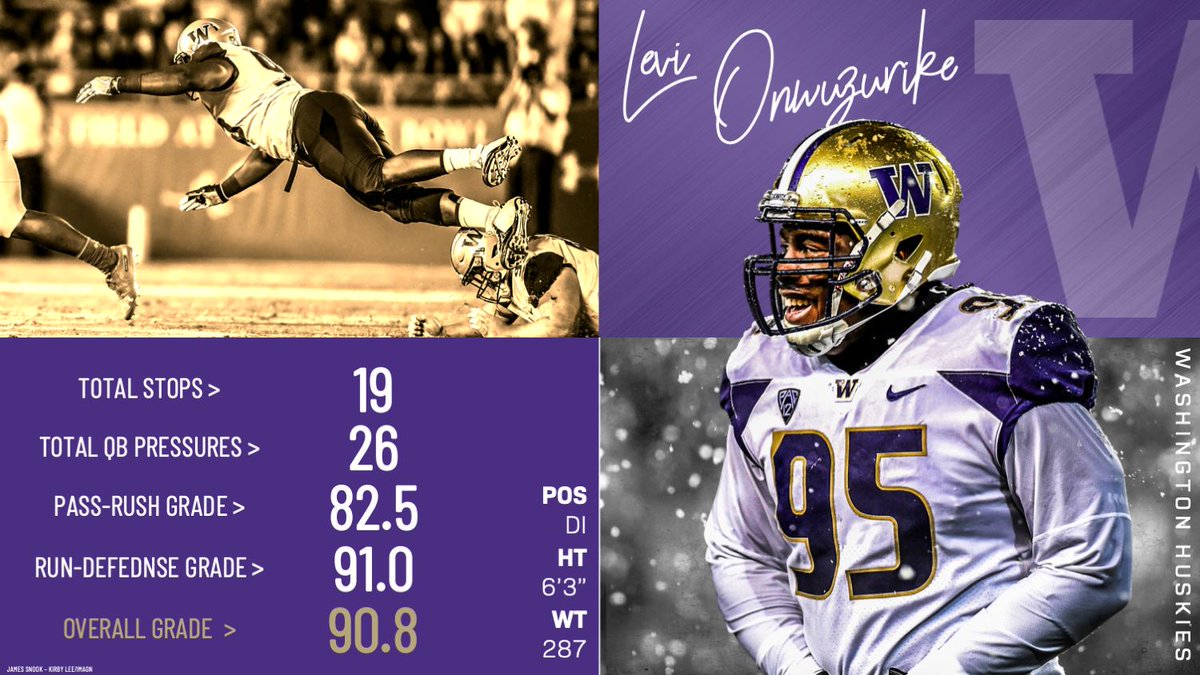 On only 391 snaps last season, Onwuzurike was a havoc creator. He had the highest pass-rushing win rate of any returning defensive tackle in the country and a 90.0-plus run-defense grade to boot. While not only productive, Onwuzurike is exceptionally athletic for a 290-pounder as well.

There’s really no reason why Smith-Williams shouldn’t dominate this season. A chiseled 6-foot-3, 265 pounds, Smith-Williams is one of the most physically imposing edge defenders in the entire country. His feel for the position was still a work in progress last season when he earned a 71.7 overall grade in his first year as a starter. If his internal processing speeds up just a little in 2019, he’ll have a big year.

Through two seasons of college football, few linebackers have been better in coverage when on the field than Gay. He earned an 87.1 coverage grade on 74 coverage snaps as a freshman and a 90.6 grade on 156 coverage snaps last season. While he doesn’t offer much between the tackles against the run, Gay moves like a safety even though he’s listed at 240 pounds.

Diggs has already made it onto the radars of most, as Alabama players tend to not get overlooked. He’s only played 464 snaps so far in his career, though. His one-catch performance on five targets against Ole Miss last season was one of the most impressive against that talented receiving corps that we saw all season.