Island games are the highlight of any NFL week for betting enthusiasts. And as the industry continues to grow, some of the most discussed moments belong to these single-game opportunities. Nowhere is that showcased better than during the NFL playoffs.

PFF will be bringing you all of the best betting opportunities for every single playoff game from our predictive betting models and player prop tools.

Let’s dive into the best value bets for Saturday's divisional-round contests between the Las Vegas Raiders and the Cincinnati Bengals before the nightcap featuring the New England Patriots at the Buffalo Bills.

One of the easiest transitions into sports betting is through player props, as fantasy football applications are helpful for evaluating betting opportunities.

The edges continue to get smaller for anyone focusing on overs in the prop market. The wild card round was the 12th weekend where blindly betting unders in PFF’s player prop tool led to a positive week from a units won perspective. As we head through the playoffs, roles and usage are at their stickiest points and pregame injuries don’t influence the markets as much. The path of least resistance is to sweat out some unders, despite how uncomfortable that can feel at times.

Receiving yardage and passing yardage unders continue to be the best category to bet. Target share is somewhat consistent but more difficult to predict than rushing attempt share. Receptions are also viable spots to take unders for this same reason, as are passing touchdowns. The Poisson distribution of both outcomes means price is a significant factor in deciding if one of those prop categories is worthwhile to bet from either side.

If looking to target overs, rushing attempts and combining rushing and receiving yardage numbers continue to be the best opportunities, along with an opportunity to target some quarterbacks to throw for at least one interception. 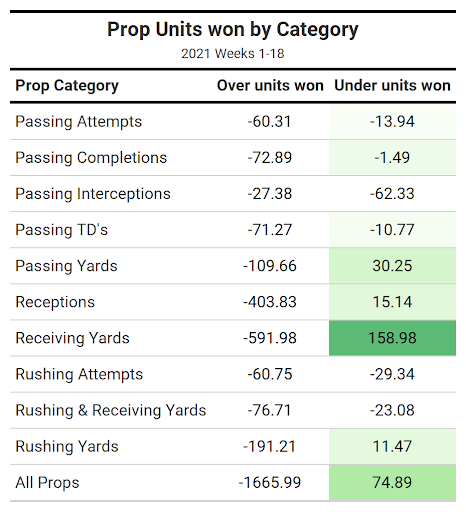 A better way to quantify an edge is through PFF's Best Bets tool. The ability to adjust both number and price means you are always certain of the expected value for each prop bet. Let’s dive into the best player props to bet for the NFL Thursday night game.

Fading Uzomah in this game comes down to two factors: a low target share and a horrible matchup against the Titans' defense.

This season, Uzomah — whose 62.0 receiving grade ranks just 29th out of 50 qualified tight ends — has cemented his spot as quarterback Joe Burrow’s clear No. 4 target. Uzomah hasn’t had a target share above 19% in any game all season, and he has only four games above 15%. Getting Uzomah involved in the offense is rarely a priority for Zac Taylor’s offense.

Combine a lack of elite positional talent and a low target volume with a matchup against the NFL’s most dominant defense against tight ends, and this is an easy bet on the under. The Titans’ 90.0 coverage grade against tight ends ranks first among all teams this season and is the fifth-highest single-season grade of any team since 2015.

PFF’s player props tool gives Uzomah a 54.7% chance to record 31 or fewer yards in this game, which, at -114 juice, is a positive expected value bet.

The odds-on favorite for Offensive Rookie of the Year, Chase has had a historic rookie season for the Bengals. Among rookie receivers with at least 100 snaps played since 2011, Chase ranks fifth in receiving grade, first in yards, seventh in receptions and first in touchdowns.

While the Titans boast one of, if not the best safety duos in the NFL, their cornerbacks leave a lot to be desired.

PFF’s WR/CB matchup chart projects Chase to line up across from Kristian Fulton (67.8 coverage grade) and Janoris Jenkins (64.6) on 84% of his snaps Saturday, and both of those matchups are graded as “excellent” in favor of Chase.

After easily covering his receiving yards prop last week versus the Raiders, Chase has a 56.4% chance to do it again this week, according to PFF’s player props tool.