With eyes towards the 2018 NFL Draft, here are the players to keep your eyes on in the Playstation Fiesta Bowl. 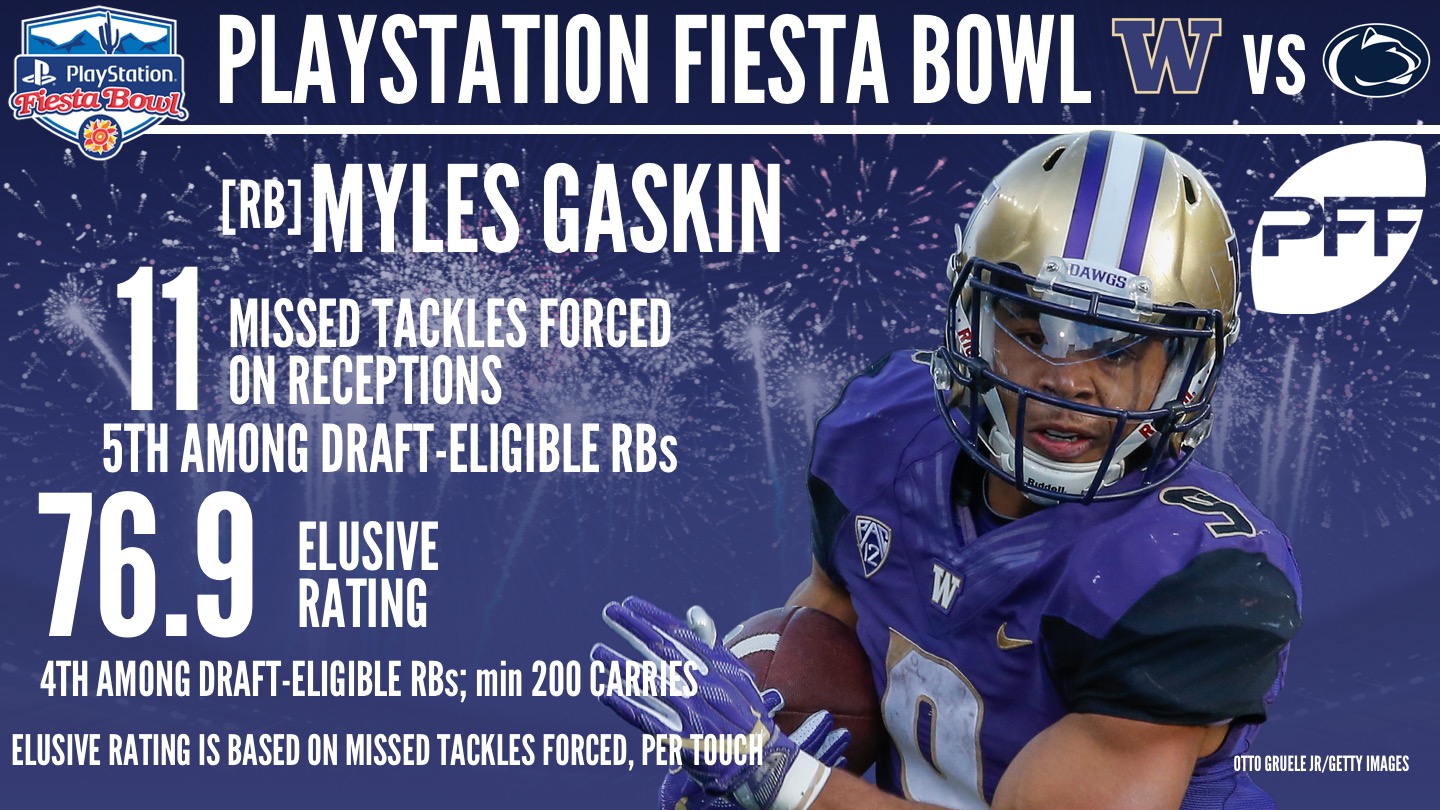 Gaskin is on the smaller side of running back prospects, but he has been productive for years now for the Huskies. Gaskin is adept at making defenders miss, and his elusive rating of 76.9 ranks No. 4 among draft-eligible running backs with at least 200 carries on the season. He is also effective as a receiver and has forced 11 missed tackles on receptions, which ranks fifth among all FBS draft-eligible running backs. – @PFF_Jordan 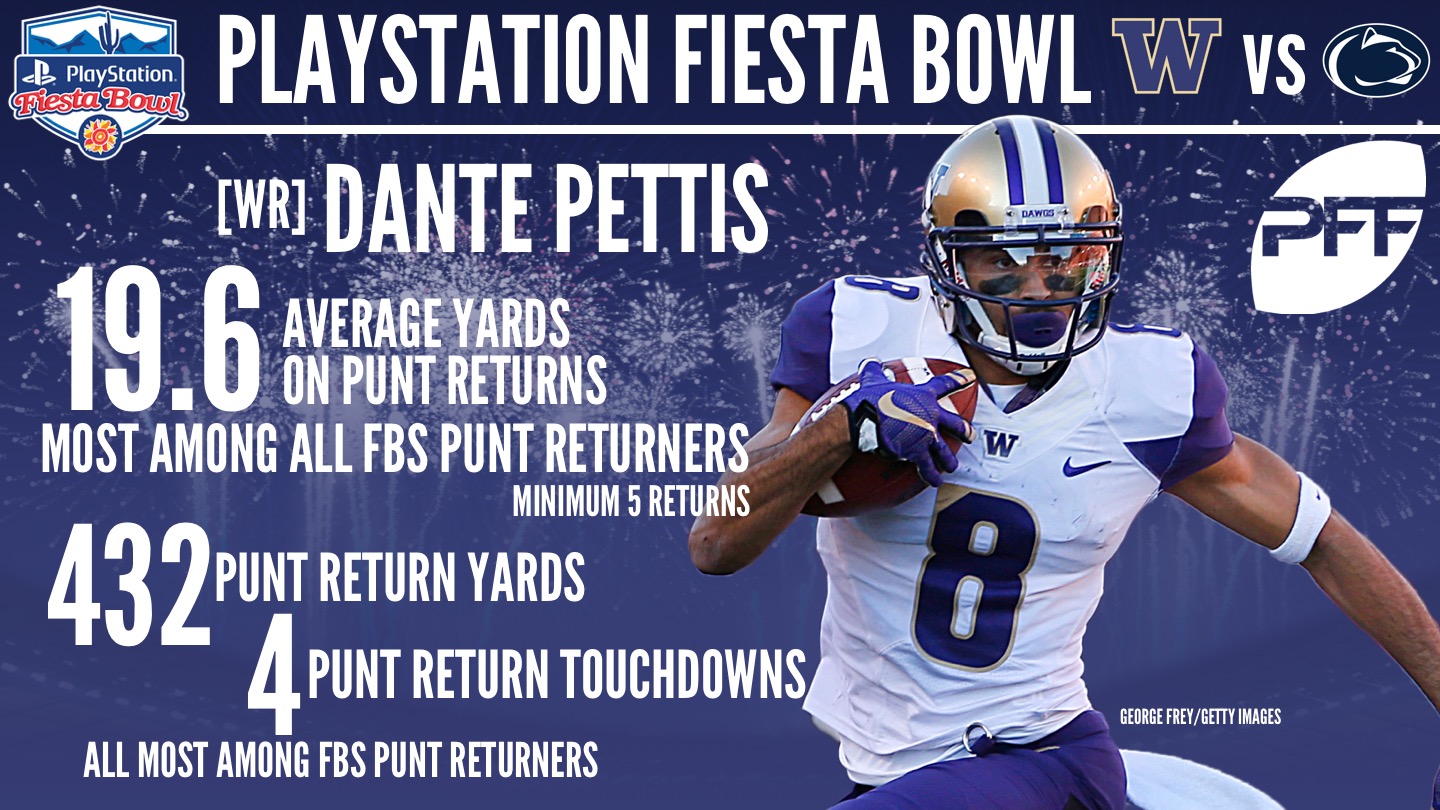 A true threat with the ball in his hands, Pettis' receiving numbers of this year don't quite match his 2016 season, however, his ability to shake defenders and gain yards after the catch is what could have NFL scouts eyeing. Pettis averages 4.0 yards after the catch per receptions this season, a career-high and over his career, he's forced 19 missed tackles after the catch. His ridiculous eight career return touchdowns could immediately grant him playing time at the next level, as he's averaged 19.6 yards per punt return this year. – @PFF_Cam

A four-year letterman with the Huskies, Shelton has been extremely productive for the past four season at Washington. This year, perhaps his finest of the lot, he's improved his pass-blocking and allowed only eight total pressures this season, including just one sack and just one QB hit. For his career now, he's logged 1,594 snaps in pass protection and allowed just 15 pressures that resulted in a hit on the quarterback (five sacks, 10 hits). – @PFF_Cam 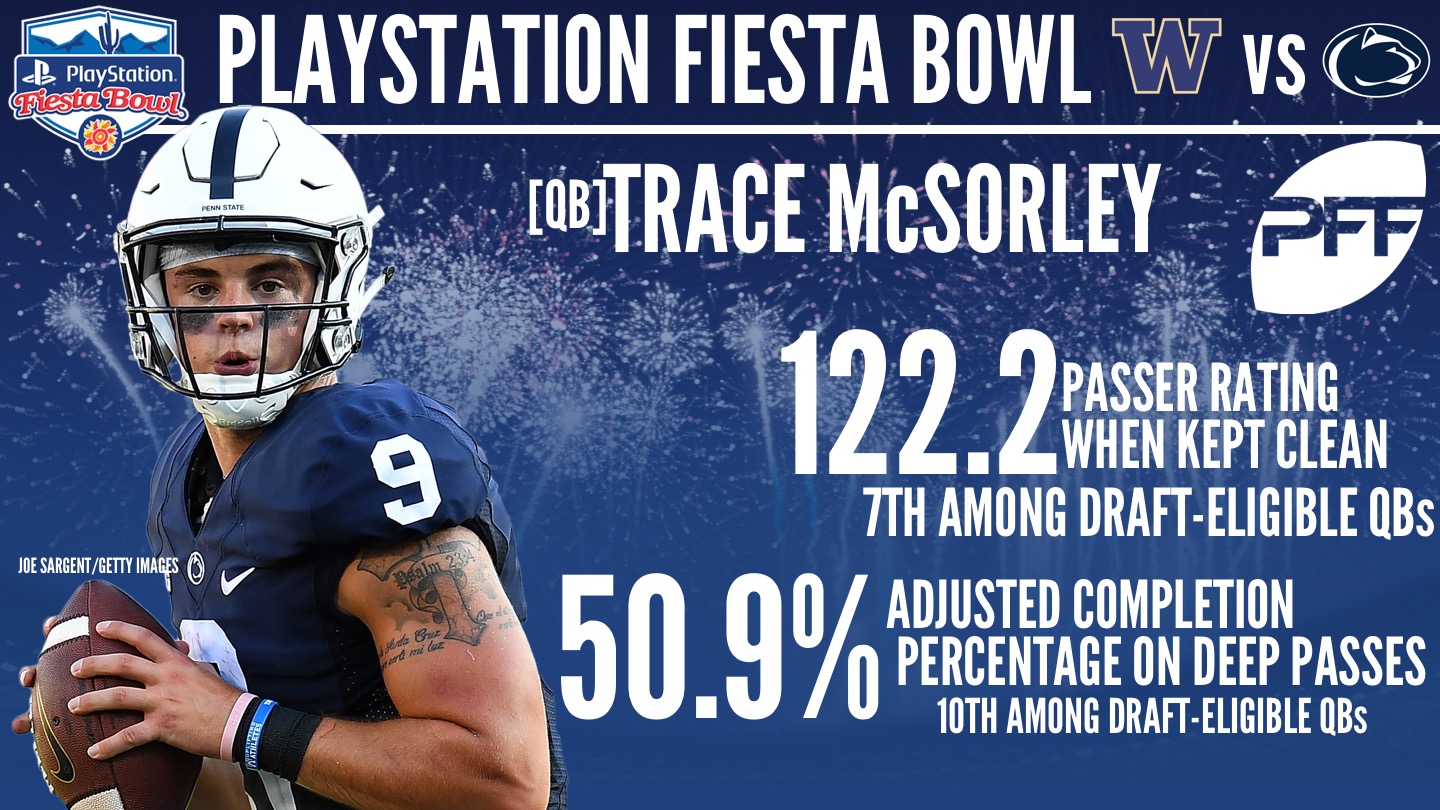 McSorley’s athleticism allows Penn State to be very creative in the running game, but McSorley can also beat opposing defenses with his arm. His adjusted completion percentage (which accounts for drops) on deep throws (attempts that travel at least 20 yards through the air from the line of scrimmage) of 50.9 percent ranks 10th among draft-eligible quarterbacks, and his passer rating of 122.2 from a clean pocket is seventh-best. – @PFF_Josh

Barkley has been a force as a runner, receiver and a returner this year, and with 194 combined forced missed tackles rushing and receiving over the past three seasons, he is one of the most elusive players in the country. The cherry on top has been his improved play in pass protection this year, as his 86.2 grade in discipline ranks fifth among all FBS running backs. – @PFF_Josh 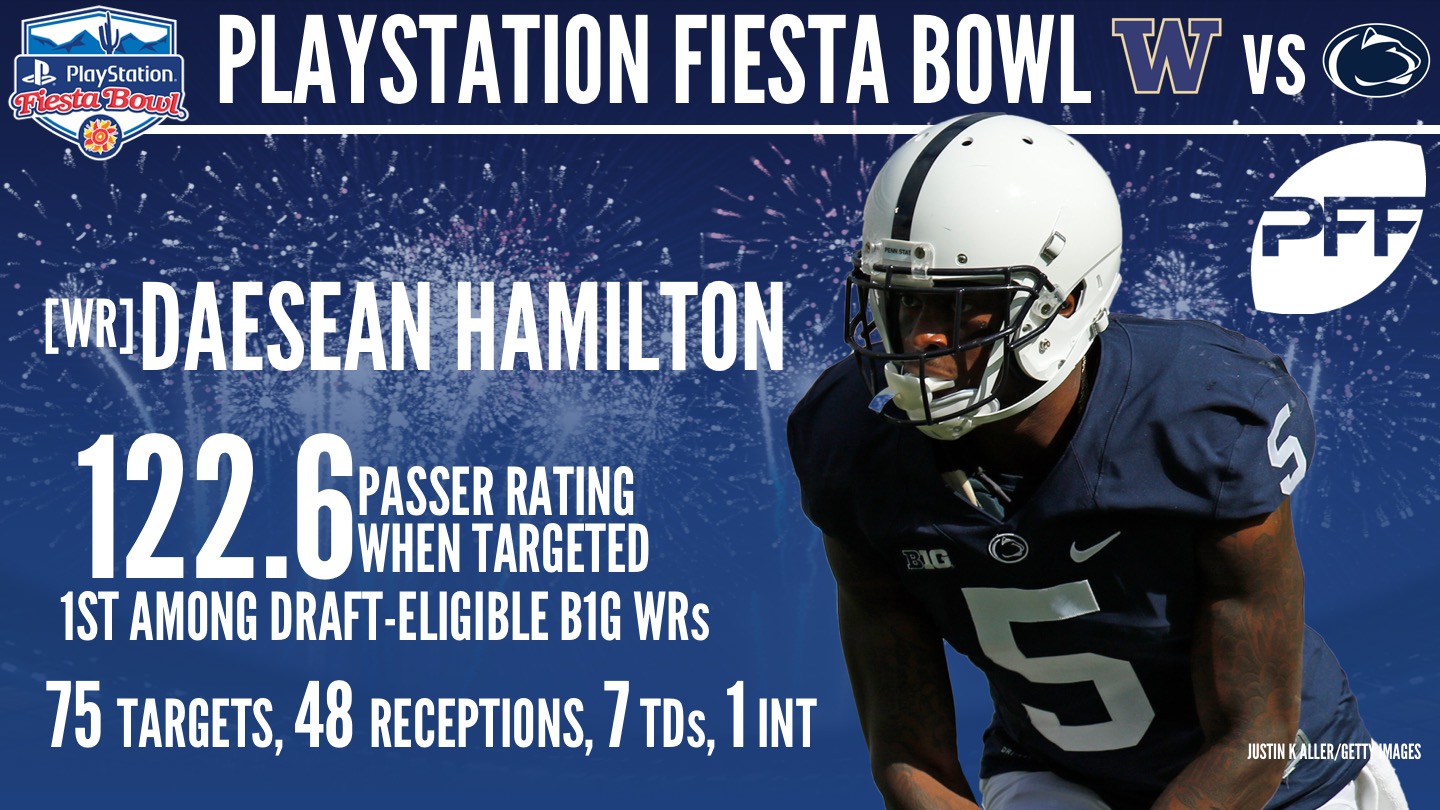 Hamilton has emerged as the top receiving weapon for Penn State this year and one of the most prolific slot receivers in the country, as his 720 receiving yards from an inside alignment ranks 11th in the draft class. His quarterbacks had a collective passer rating of 122.6 when targeting him, which ranked first among Big Ten draft-eligible receivers with at least 50 targets. – @PFF_Josh

Gesicki was our All-Big Ten first team tight end this year, in part because his drop rate of 3.77 percent led all draft-eligible tight ends in the conference. While he was used differently in this year’s offense, last year he ranked second among all FBS tight ends with 301 receiving yards off deep targets. – @PFF_Josh

Cabinda had a rough September but was outstanding throughout the Big Ten season. He ranked third in run-stop percentage among draft-eligible linebackers during conference play, and he also ranked in the top 10 in pass-rush productivity and coverage snaps per reception allowed. – @PFF_Josh

Allen is among the top all-around safety prospects in the country this season. He ranked second among draft-eligible Big Ten safeties in run-stop percentage, and opposing quarterbacks had a passer rating of just 57.5 when he was the primary defender in coverage. – @PFF_Josh 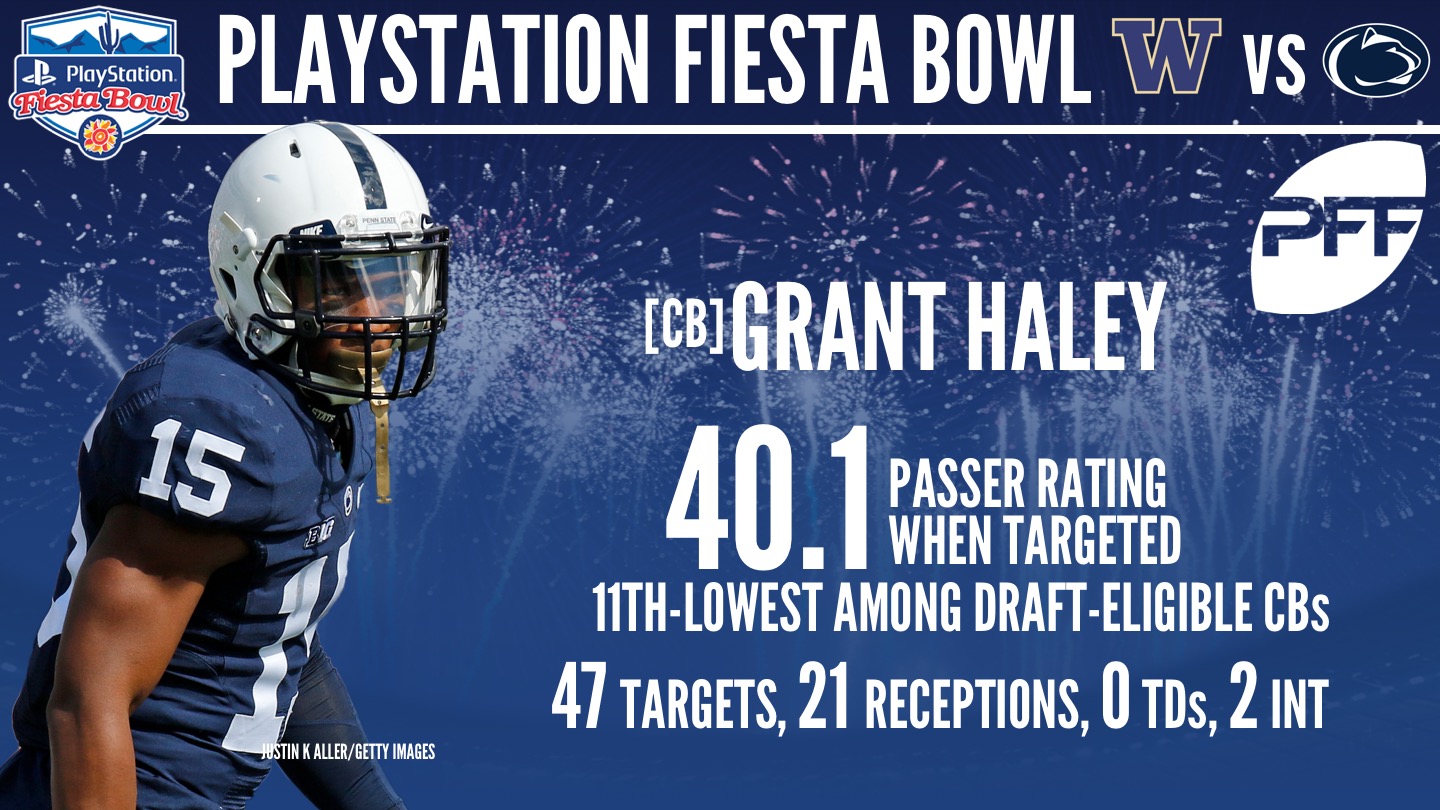 Haley was outstanding in coverage all season, as he did not give up a touchdown and allowed just 21-of-47 throws into his coverage to be completed. He allowed a passer rating against of just 40.1, which ranked 13th among all FBS cornerbacks with at least 40 targets against. – @PFF_Josh