With eyes towards the 2018 NFL Draft, here are the players to keep your eyes on in the Citrus Bowl by Overton's. 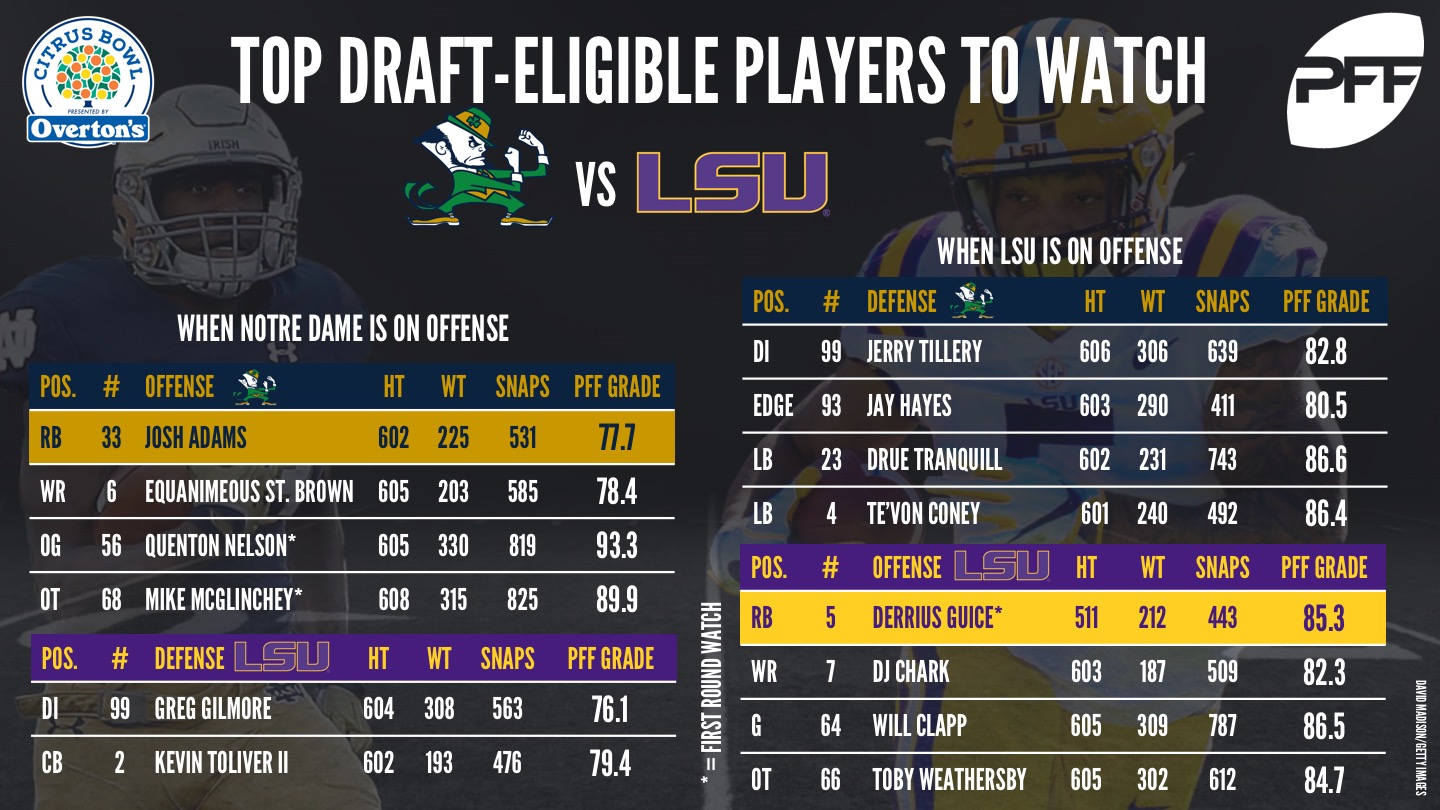 When Notre Dame is on offense

The Irish offense centers around three players, each of them among the best in the country at their individual positions. Running back Josh Adams forced 43 missed tackles on runs, and ranks third in elusiveness among draft-eligible running backs. His 5.20 yards after contact per attempt rank second in the same group behind only Alabama’s Damien Harris, who carried the ball 81 less times than Adams.

Offensive guards don’t get selected in the first round often, but go ahead and pencil in Quenton Nelson as a sure-fire April 26 pick. He allowed just one sack and four total pressures this past season, but the most dominant facet of his game this year was his run-blocking. Not only is his run-blocking grade of 95.3 the best in the country this year, his next closest competitor in the category, Will Hernandez of UTEP, trailed significantly with an 87.5. 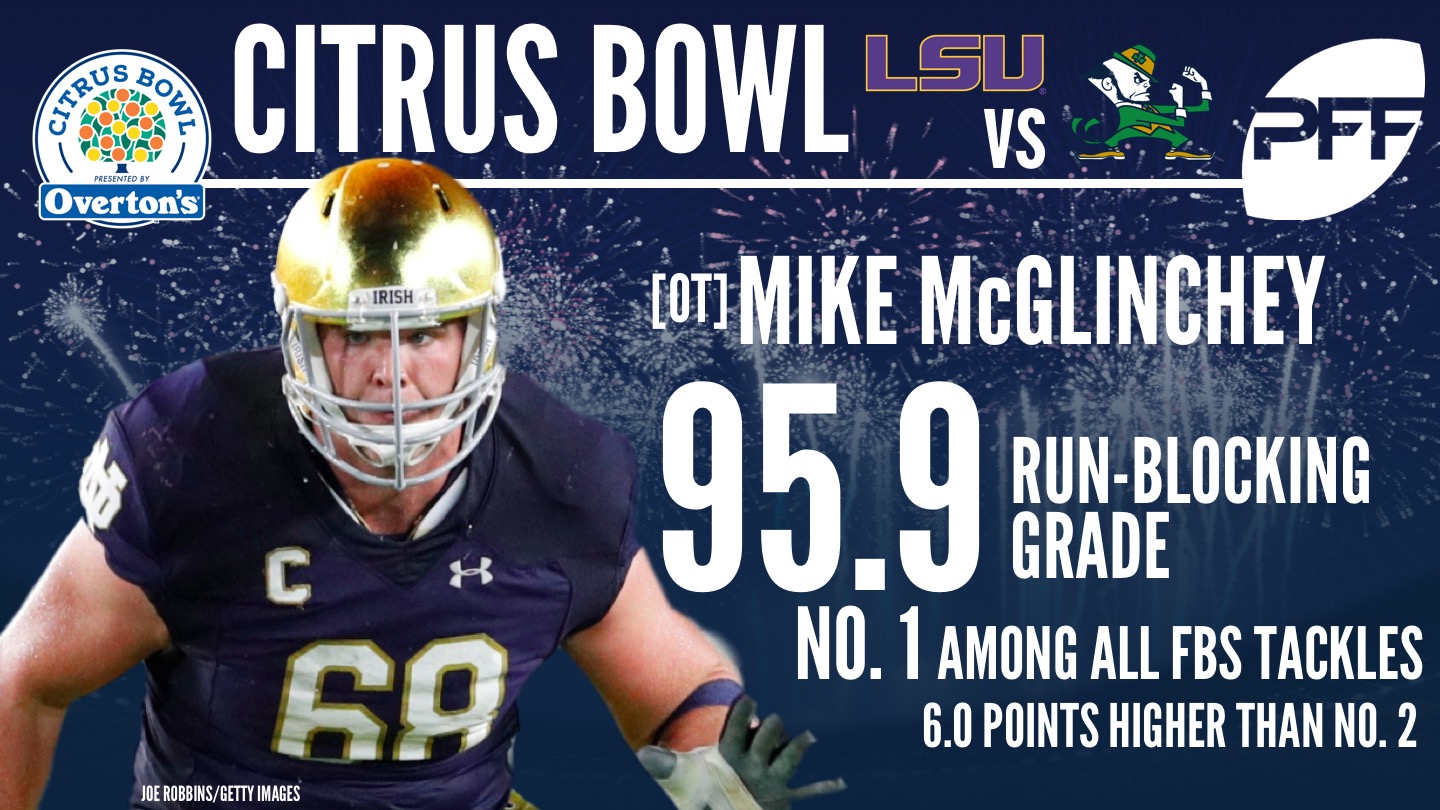 The final crown on the three-headed monster in South Bend is left tackle Mike McGlinchey. Listed at 6-foot-8, 315-pounds he truly is a monster at his position, but still displayed enough quickness and technique on the edge to surrender just five sacks and six hits combined as a starter the past three seasons. Like his teammate Nelson, McGlinchey is even more dominant on run blocks, as his 95.9 run blocking grade is six points better than No. 2, Oklahoma’s stud left tackle, Orlando Brown.

LSU has a plethora of pass-rushers, but the best players on the Tiger defense this year have arguably been their standout cornerback duo in freshman CB Andraez Williams and junior CB Donte Jackson. The latter has allowed just 29 receptions on 54 throws into his coverage this year with 11 total passes defensed. His last two games of the regular season, however, were his worst statistically, and despite notching a pick against Texas A&M, he gave up a combined nine receptions on 13 throws into his coverage, as well as his only two touchdowns of the year.

When LSU is on offense

Like Notre Dame, LSU has its own stud running back with the luxury of being able to run behind a top-end offensive line. Derrius Guice didn’t play quite at the same level this year as he did in 2016, but he still forced 35 missed tackles on 2016 carries. For his career, 1,636 of his 2,983 rushing yards have come after initial contact. 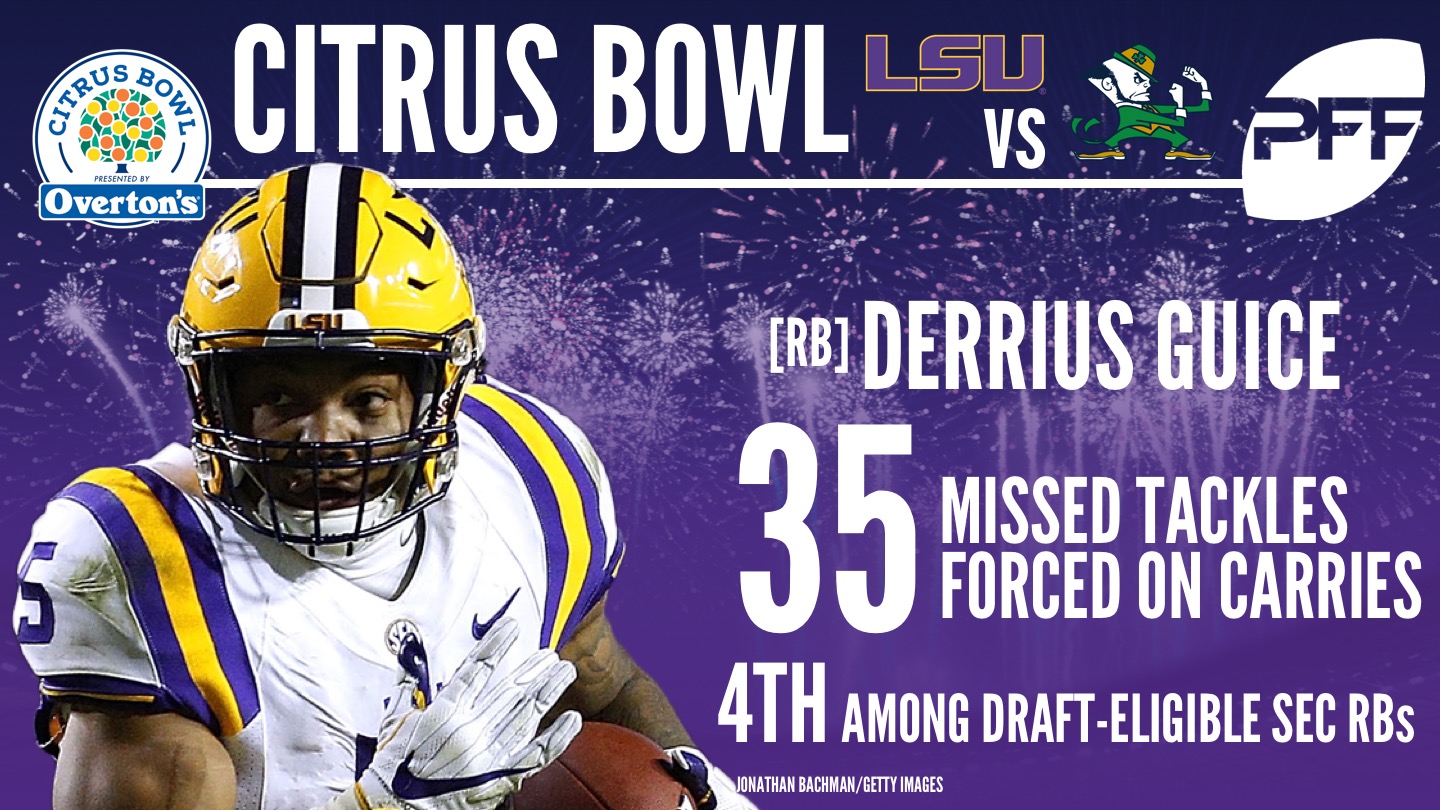 Center Will Clapp is one of the top-graded centers (should he choose to enter the NFL this year) in a loaded class. He surrendered just one sack and no hits this season, and for his three-year career, in which he’s started at each of the three interior line positions, he has given up just one sack and five quarterback hits total. Clapp had his best season in the run game this year, posting an 84.5 grade in the discipline, which ranks sixth-best in the country.

The top perimeter weapon in this game is LSU’s DJ Chark, who registered six receptions of at least 40 yards this season. Not surprisingly, his 14 total deep pass receptions (balls that travel at least 20 yards through the air from the line of scrimmage) ranked fourth among draft-eligible receivers this year, as did his 572 receiving yards on deep shots. Chark’s deep pass production helped push his yards per route run to 3.02 which ranks No. 15 among all FBS draft-eligible receivers. 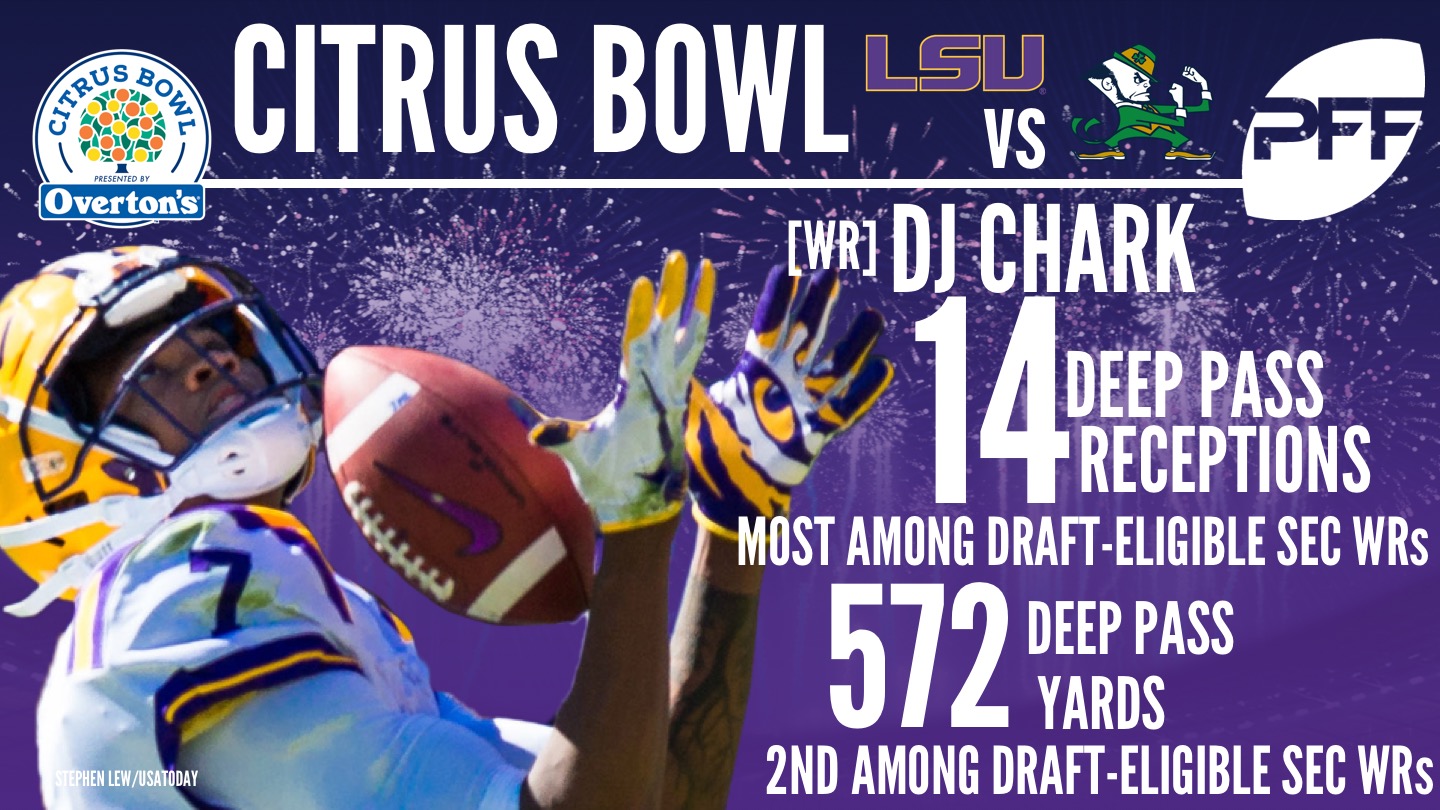 The Notre Dame defense does not have a player with more than three sacks or seven-combined sacks and quarterback hits on the season, but interior defender Jerry Tillery recovered nicely from a slow September to post 35 total pressures. Tillery was also effective on run defense, as he posted 10 run stops (18 total tackles) with just one missed tackle after Week 3.

Linebacker Te’Von Coney has been the best run defender for the Irish this season, as his 13.8 run stop percentage ranks 12th among all FBS inside linebackers. He has also been a dependable tackler in coverage, as opponents have averaged just 6.6 yards per reception against him, despite him giving up catches on 15-of-16 throws into his coverage.