Beyond providing data for all 32 NFL teams, PFF also supports network broadcasters with game-preview packets that are used to enhance the in-game experience for fans and viewers. This Bengals-Panthers preview features the same information our broadcast partners use for team research and in-game production.

Bernard back in the spotlight with another Mixon injury

With Joe Mixon expected to miss a couple of weeks with a knee injury, the former Tar Heel will be thrust into a bigger role on the ground.  With Mixon out last year, the Bernard stepped his game up after only managing to force five missed tackles on 53 touches before Mixon's injury. 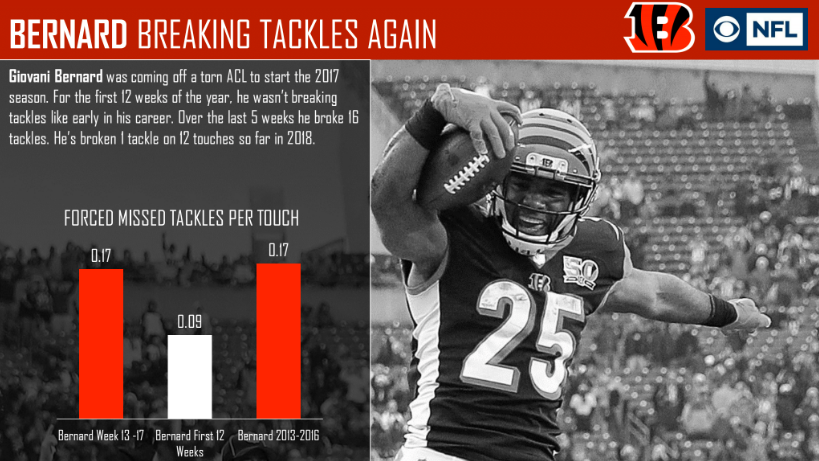 The Bengals pass-rush looking to prey on Panthers O-line

The Bengals pass-rush has been a strength since 2011 and has graded in the top half of the league as a team every year except 2014. With Geno Atkins leading the way inside, Carlos Dunlap and Carl Lawson also brought the pressure from the outside last year, as each earned more than 50 pressures in 2017. 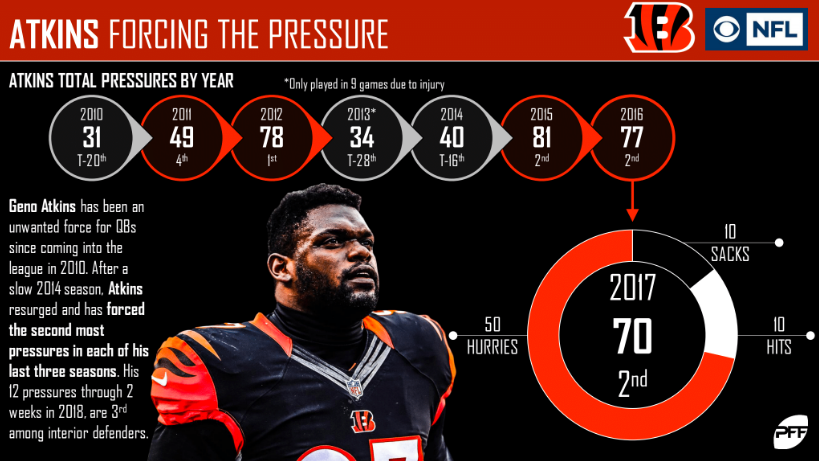 If Cam Newton wants to have success on Sunday, he'd be wise to avoid targeting cornerback William Jackson, who is quickly becoming one of the premier talents at the position. Last year, Jackson allowed just 0.38 yards per coverage snap and a paltry passer rating of 36.1, which were not only good numbers, they're some of the best we've ever seen. 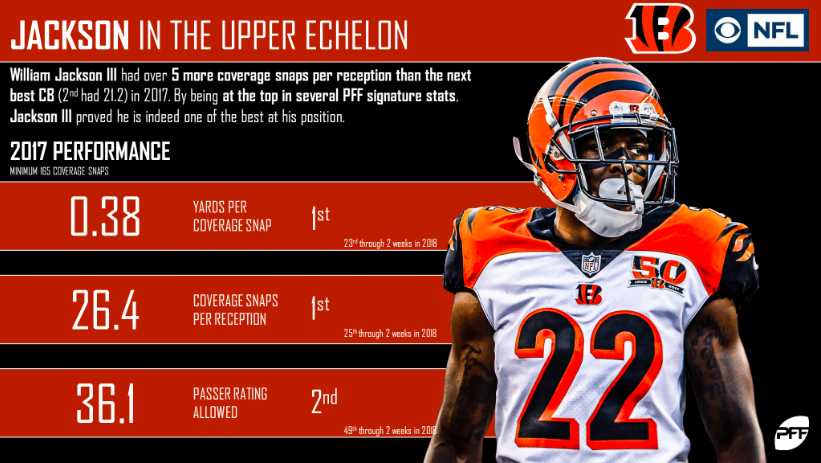 Dalton sticking to his guns in the red zone

Andy Dalton was one of the most aggressive signal-callers in the red-zone last season. His big-time throw percentage of 10.5 percent was almost double the NFL average, and he threw a touchdown on more than a quarter of his red zone attempts. It'll be fascinating to see if he can continue this aggressive trend in 2018. 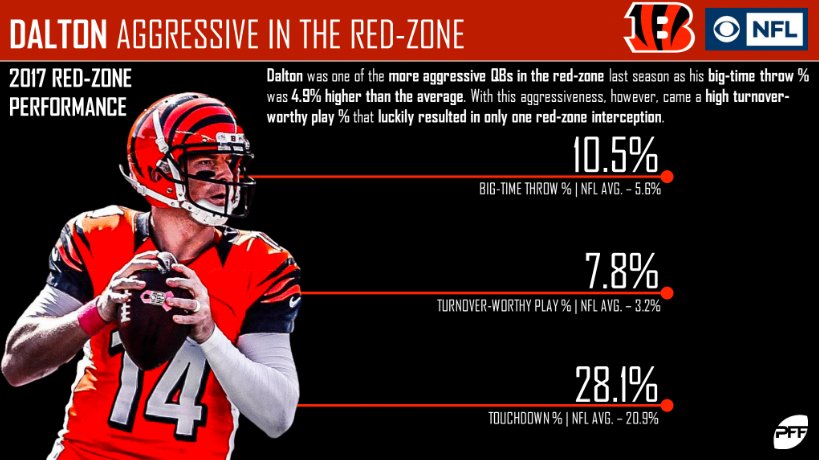 Is Newton on the way back?

Although it's still early in the year, Cam Newton looks to be improving upon some of his numbers from a season ago. In 2017, Newton finished 32nd in the NFL in most big-time throw percentage, but it’s nice to see that after week 2 of 2018, Newton already has three big-time throws to his name, which ranks 10th among the league's signal-callers. 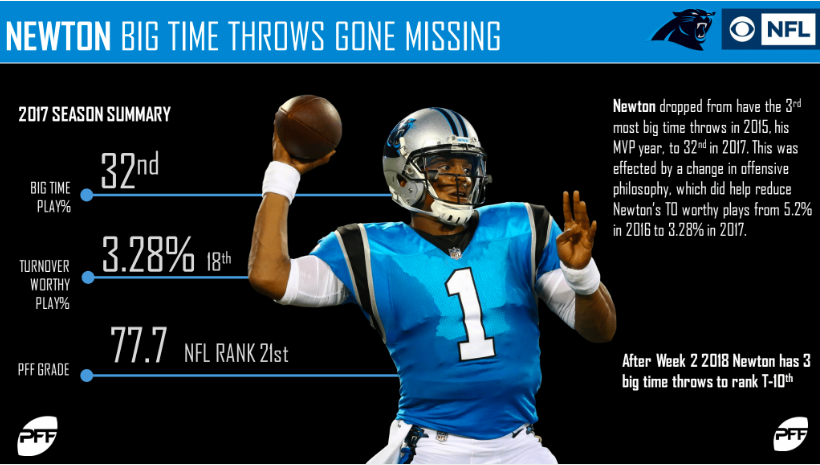 Newton’s sidekick, Christian McCaffrey, will be looking to continue his dominance as a receiver out of the backfield. After excelling in this role as a rookie, the second-year back is off to the races yet again early in 2018. McCaffrey piled up 14 receptions on 14 targets in Week 2 alone and has an 85.1 receiving grade through two weeks – the second-best mark in the NFL. 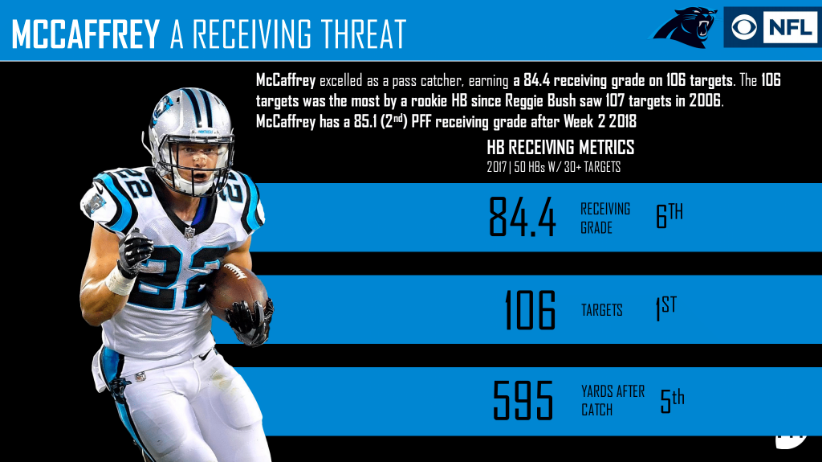 On defense, linebacker Luke Kuechly will look to get back on track against Andy Dalton and the Bengals. In 2017, Kuechly was targeted 62 times in coverage and ranked second among linebackers in coverage grade (90.1) and first in passer rating allowed (73.5). Through two weeks of the season this year, Kuechly has allowed a 101.2 passer rating and has attained a 72.5 coverage grade. 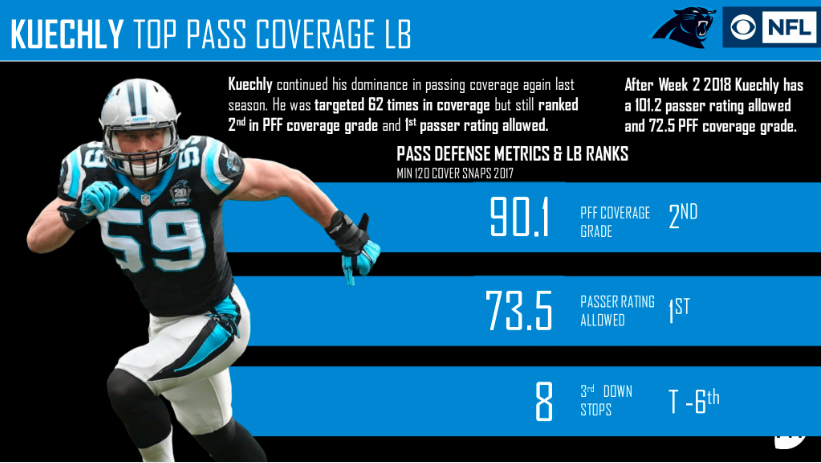 During the offseason, the Panthers brought in interior defensive lineman Dontari Poe to replace the departed Star Lotulelei, and based off last year's performance – they may well have upgraded at the position. Poe can further impress the Panthers brass with a strong performance against the Bengals, who will likely be without Billy Price, their starting center. 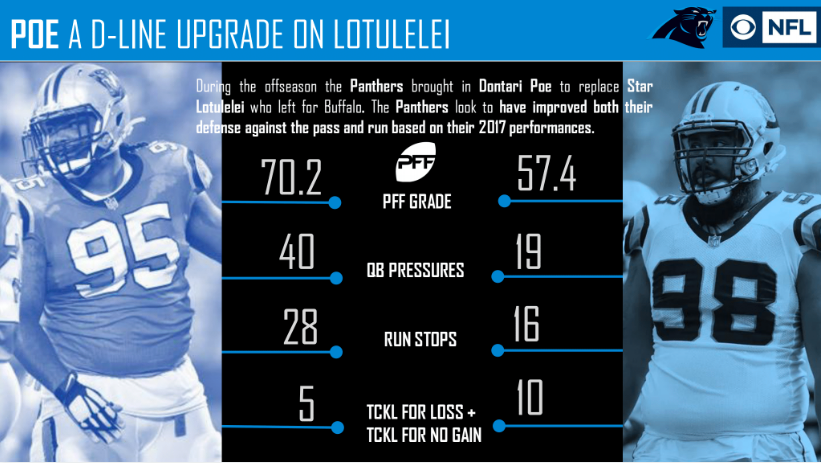