With recent additions to the Raiders offense, QB Derek Carr could look deep more than ever in 2019

The Oakland Raiders made a splash this offseason with the signings of Antonio Brown and Tyrell Williams, signings that have turned one of the league's most underwhelming receiving corps into one of the NFL's better units. While the addition of the veteran pass catchers will no doubt open up the Raiders' passing game to all levels of the field, the biggest takeaway from the team's revamping of the receiving corps is the downfield help that it could bring to quarterback Derek Carr.

Both wide receivers come to Oakland after spending their entire careers with prominent quarterbacks from the illustrious draft class of 2004. Brown spent the past nine seasons paired with Ben Roethlisberger as one of the most dominant duos in NFL history, while Williams spent all four of his seasons as one of Philip Rivers’ favorite downfield weapons.

In the two years from 2015-16, the Fresno State product became one of the most prolific deep passing quarterbacks in the NFL. When targeting 20 or more yards downfield, Carr earned a passer rating of 111.5 that was due in large part to his league-second 20 deep touchdowns over that span. The biggest beneficiary, recently departed receiver Amari Cooper, reeled in eight of those 20 deep touchdowns, and he is still the only receiver Carr has ever connected with for 10 or more deep passes in a season. Despite his success on those deep throws, Carr has never been one to target deep very often. His career-high in deep-target percentage came in 2017 with a mark of 12.2%, and that's the only time in his career that he has reached the 12.0% threshold. In comparison, at least 15 quarterbacks have reached the 12% plateau every year since 2006. Even with his success downfield, Carr has never ranked in the top 20 in the NFL in average depth of target for a season.

Last season was a down year for Carr (and the Raiders’ offense as a whole) with the deep ball. Amari Cooper’s deep target percentage dropped from 21.1% in 2017 to 13.3% prior to his trade to the Cowboys, while Carr ended the regular season with a deep passer rating of just 91.7 – 15th among quarterbacks. Carr was also one of only two quarterbacks who played 16 games but failed to throw a 40-plus yard touchdown, Eli Manning being the other.

As with any quarterback, he can be somewhat dependent on the weapons he’s targeting. Since 2017, Oakland wide receivers have combined for 31 deep receptions and six 40-plus yard touchdowns. In that same span, both of Carr’s new targets, Brown and Williams, have nearly reached those numbers by themselves. Brown has hauled in 28 deep receptions on his own and Williams has brought in five 40-plus yard touchdowns in the past two years. 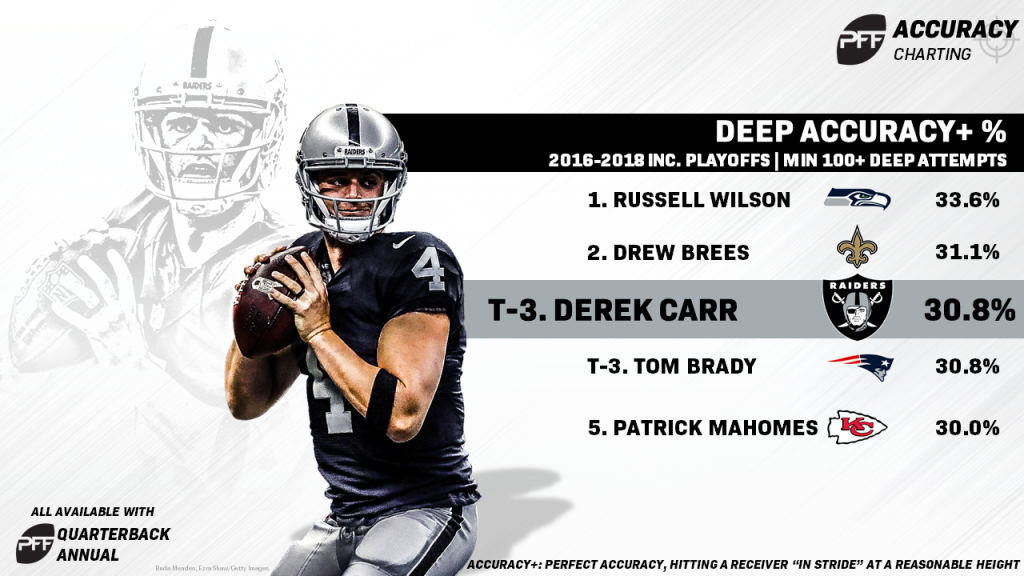 With how well these receivers have produced with their previous quarterbacks, it would be surprising if Carr didn’t look downfield more often in 2019 and beyond. While the box-score numbers may not have shown it, Carr has graded higher than Rivers (90.9) and just slightly lower than Roethlisberger (96.4) over the last three seasons, with a 95.4 deep-passing grade that ranks 11th among 31 quarterbacks in that span. His grade is due in large part to his accuracy downfield, as Carr is tied with Tom Brady for the third-highest perfect accuracy percentage on deep passes since 2016.

If Carr is anywhere near as aggressive as the Raiders were this offseason, we can expect a career-year for the signal caller. There is no doubt that this is the most talented wide receiver corps that Carr has been surrounded by, and only one of the four receivers added to the team failed to see an average depth of target of 10 yards or more in 2018. Carr has the arm to push the ball down the field; now he has the weapons on the outside to make the most out of those plays. If Brown and Williams can replicate what they did in Pittsburgh and Los Angeles, then there could very well be a resurgence bubbling in Oakland.