While cast in Aaron Donald’s shadow, Fletcher Cox will go down as one of the best to ever do it

The freak that is Aaron Donald and his reign as the NFL’s top defensive interior has unfairly pushed Philadelphia Eagles’ Fletcher Cox into the shadows, forcing a perennial talent in Cox to play the role of Scottie Pippen or Reggie Miller in what was Michael Jordan’s 90s. Donald, like Jordan, will draw in all of the top accolades and significant praise when we look back on this era of NFL talent; Cox and his praise will undeservedly be the afterthought. 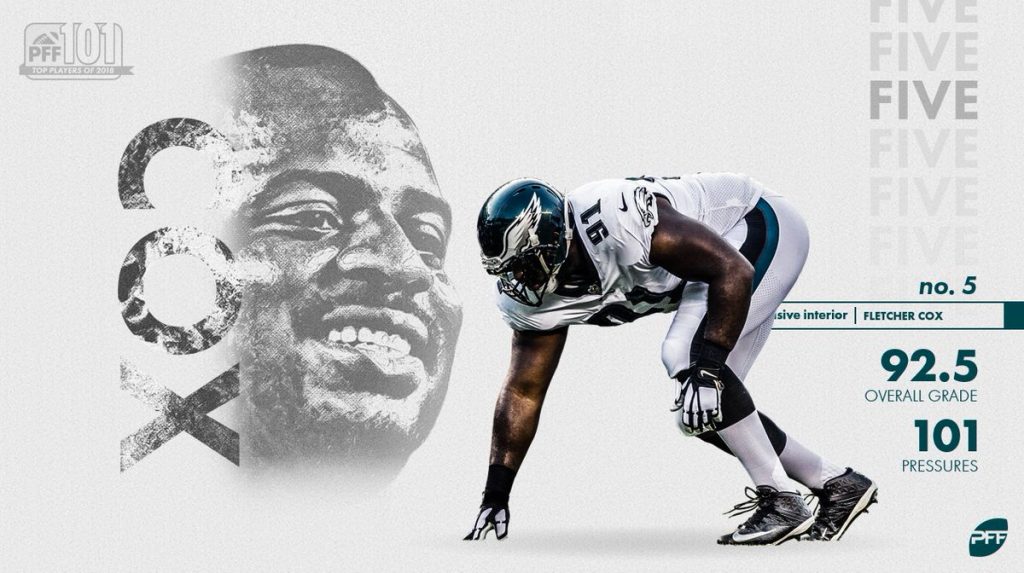 Among the 125 interior defensive linemen with 500 or more pass-rush snaps since 2015, Donald ranks first in pass-rush grade (95.9), total pressures (375) and pass-rush win percentage (22.1%). Cox ranks second behind Donald in all three metrics.

Donald’s pass-rushing ability is truly second to none at the position, but the man that lays claim to second on the list is damn good. Cox isn’t nearly as athletic or explosive as Donald, but the 6-foot-4, 310-pounder holds his own in that regard considering his bear-like size. He’s a mountain of a man that moves likes he’s much smaller but hits his opposition like he’s much bigger. And he’s just now coming off the best pass-rushing season of his career.

As previously mentioned, Cox’s pass-rush win rate in 2018 (20.9%) is the fourth-best single-season mark of any defensive interior in the PFF era. And his 91.2 pass-rush grade this past season, another career-high for the big man, also ranks inside the top 10 among qualifiers since 2006.

Detroit Lions’ Damon “Snacks” Harrison has earned the top run-defense grade of any defender over the past five years and will likely go down as one of the NFL’s best run defenders to ever take the field. Not even Donald can take that away from Snacks, but he isn’t too far down the list after him, and neither is Cox.

Cox plays the role of immovable force as opposed to penetrator more than Donald largely because of their size differences, which is a primary reason why Donald leads all interior linemen in tackles for loss or no gain of the past years with 78 while Cox ranks ninth with just 45. Both are fantastic run defenders, two of the best in the NFL, but (again) it’s Donald that gets the nod over Cox.

Donald is the best interior defender in the sport right now and could very well go down as the best the NFL has ever seen when it’s all set and done. Cox is a first-ballot Hall of Famer that will undoubtedly retire as one of the NFL’s top interior defensive linemen to ever play the game.

Both can be true.