With hybrid defensive fronts becoming more and more common in the NFL, the old-school positional designations have gone out the window. It’s rare that a defensive lineman takes more than 400 snaps in a particular alignment throughout a season, as positional versatility has become the name of the game. Still, certain defensive linemen have skillsets that fit perfectly into specific positions. These are those defensive linemen who present the prototypical skills of each technique grouping in the NFL today.

[Editor's note: While there are a couple of variants of the defensive line numbering system, particularly on the outer edges of it, the system we will be using is shown below.]

A few years ago this would have hands down been Damon Harrison. However, the rise of the passing game has forced even nose tackles to up their game in the pass-rush, and no one affects the pass better between the guards than the Packers nose tackle. Last season, Clark’s 91.5 pass-rush grade from 0- or 1-technique was the tops of any player in the NFL. Oh, and he wasn’t too shabby against the run either, as his 90.8 run-defense grade trailed only Big Snacks. As a 20-year-old at UCLA, Clark earned the most bull-rush pressures of any interior player in the nation. Now only 23(!), Clark is doing the same against grown men at the highest level.

Who else did you think it would be? Donald is not only the prototypical 3-technique in today’s NFL, but he’s also the all-time prototype at this point. The 3-technique is defined by first-step quickness and pass-rushing prowess. Against the run, it doesn’t really matter if the defensive tackle can’t hold up to double teams as long as they can get into the backfield one-on-one. And no one gets into backfields more than the Rams defensive tackle. Donald earned the highest pass-rushing grade in the NFL from the 3-technique alignment (95.1). Maybe more surprisingly, though, Donald also earned the second-highest run-defense grade from the position (92.3). Donald has a combination of athleticism and hand usage that the league has never seen before — and we’re enjoying every minute of it. 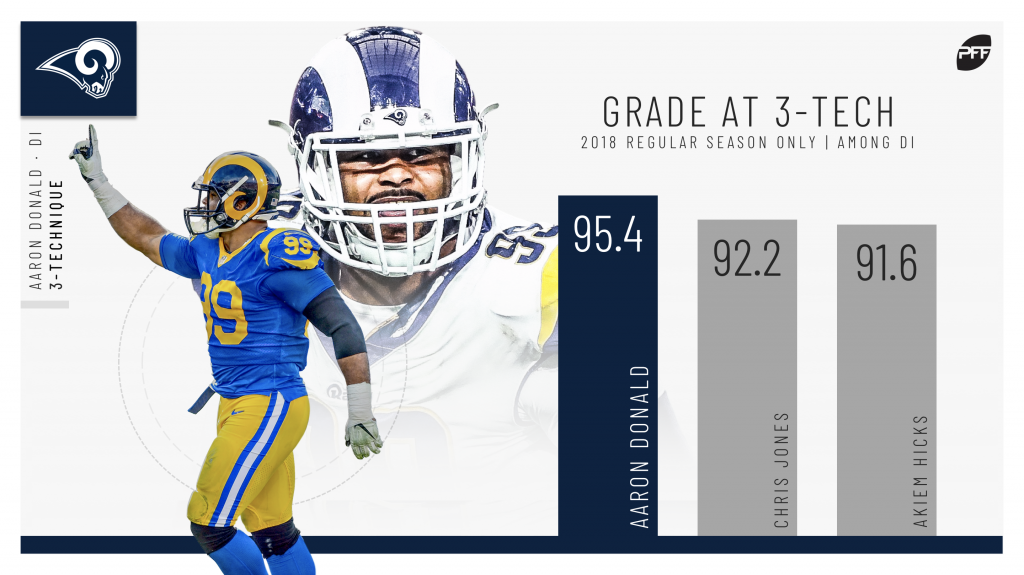 2013/2014 Watt was the all-time prototype for the 4-5-technique, and while his play has slipped off that unheard of level, he’s still quite easily tops in the NFL. Watt actually played more outside the tackles last season than in any other season in his career, but he still spent 245 snaps lined up over the tackle last season and earned himself an 89.5 overall grade on those snaps. The 4-5-tech (3-4 defensive end) requires length to be able to beat tackles immediately, and Watt combines 34” arms with a myriad of moves (and absurd athleticism). For his career lined up over the tackle, Watt has a 93.0 overall grade.

The 6-7-technique can’t solely rely on speed rushes, as they often either have to go up against tight ends or get less space to build up speed against tackles. Mack has the perfect blend of power mixed with athleticism and flexibility to execute this role at the highest level in the league. Mack earned a 91.8 overall grade last season from this alignment with his hand in the dirt. That’s even with a hampering injury over the middle course of the season.

If you tried to kick Miller inside over the tackles or inside tight ends, he might struggle to execute his move set in a way Mack doesn’t. Let him stand up out wide with some space to read the man blocking him, and there’s no one better in the NFL. A season ago, he took 839 snaps outside the tackle with his hands off the ground and was elite once again. From that alignment, he earned a 90.2 overall grade and racked up all 16 of his sacks. Not many players can hold up at under 250lbs on the edge in the NFL (Miller claims to have played at 240 at times), but Miller’s freakish athleticism makes him the prototype. 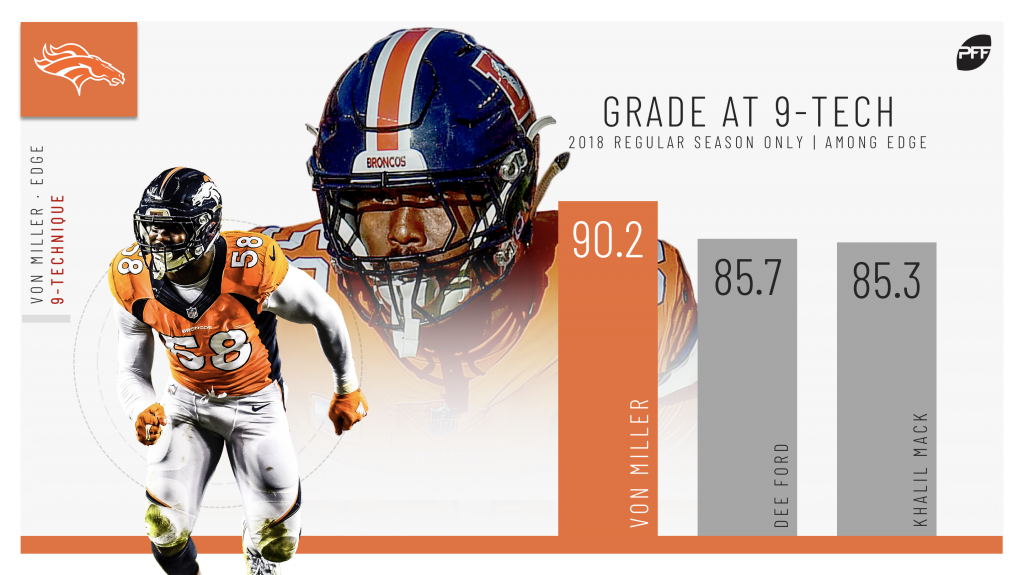