The NFL's prototypical defensive linemen for each DL technique

PHILADELPHIA, PA - DECEMBER 22: Damon Harrison #98 of the New York Giants in action against the Philadelphia Eagles during their game at Lincoln Financial Field on December 22, 2016 in Philadelphia, Pennsylvania. (Photo by Al Bello/Getty Images)

In 2011, I first wrote about the league’s prototypes for each defensive line technique. In addition to watching and grading every player on every snap of the NFL season, PFF also records far more detailed information that our team customers get access to and use as part of their internal processes. One data point they get is the exact alignment of every defensive linemen – by technique – as opposed to simply a rough description of where a player lined up by position.

The league has changed since then and positions along defensive fronts have become ever more blurred as defenses look to be more multiple and better suited to defend the changing offensive formations they are faced with each week.

The defensive line technique numbering system has been around for years, and while there are a couple of variants of this system, particularly on the outer edges of it, the system we will be using is below as a reference.

The numbering begins from being head-up over the center and works its way outward in either direction. Each shade along the way will receive its own number, or contain an ‘i’ modifier (inside). Moving across the front you will see that even numbers are head-up alignments, odd numbers represent outside shades and those containing an ‘i’ represent those inside-shaded alignments.

For these prototypes, I have not necessarily presented the best player that could represent each position, but rather the one that has the best blend of ability and prototypical physical traits, as well as the actual deployment on the field to justify it. Von Miller is likely the best pure edge rusher in football, but and could easily feature on this list, but has been bumped for another who represents a slightly purer prototype for the position, and the same is true of other players that could easily occupy some of these spots. The league has more than one prototype currently excelling at some spots.

With all that said, here are your prototypes for each of the main defensive line techniques in 2018: 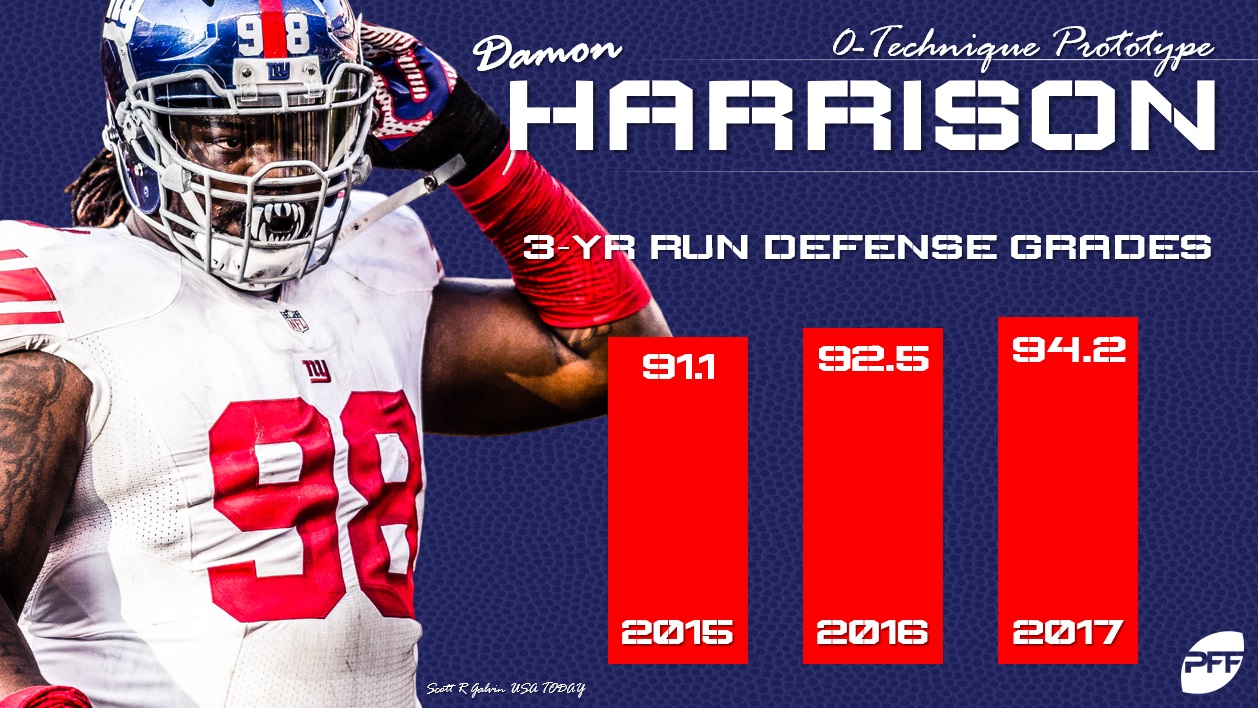 The 0-technique is a dying position, to the point that it’s not easy finding a true prototype that actually plays that alignment very often. The 0-technique, also called the nose tackle, plays directly over the center (or on the nose). In a traditional 3-4 defense, they are responsible for defending both gaps either side of the center (A-gaps) by themselves, freeing up linebackers behind them to be able to attack and clogging the middle of the line against the run.

That two-gap job involved controlling the center while also often drawing a double team from one of the guards and still being able to make a play in either A-gap. That is why these players were typically the heaviest players in the NFL, using their sheer size and strength to become immovable objects in the middle of the line.

In recent years though, the league has trended away from two-gap concepts on defense, and even players that line up in the 0-technique often only defend one of the A-gaps, shooting one side of the center after the snap and leaving a linebacker to fill the other behind them.

Harrison actually played with a 0-technique alignment on just 8.0 percent of his snaps in 2017, but we have seen from him before when he was with the New York Jets just how dominant he can be in that spot. The NFL as a whole rarely employs a player in this technique at all any more. On almost 40,000 plays in the regular season in 2017, defenses had somebody occupying the 0-tech alignment on just 11.1 percent of them, and Harrison represents a far better player than somebody like Steelers NT Javon Hargrave, who lined up there on 37.7 percent of his snaps but could only translate that into an overall PFF grade of 78.8 last season.

Harrison is the best run-stuffing force in football and has led all interior linemen in run-stop percentage for five straight years. The league may be trending away from this alignment, but it can still serve as a useful pivot point for disguising defensive fronts before the nose tackle attacks one gap post-snap. 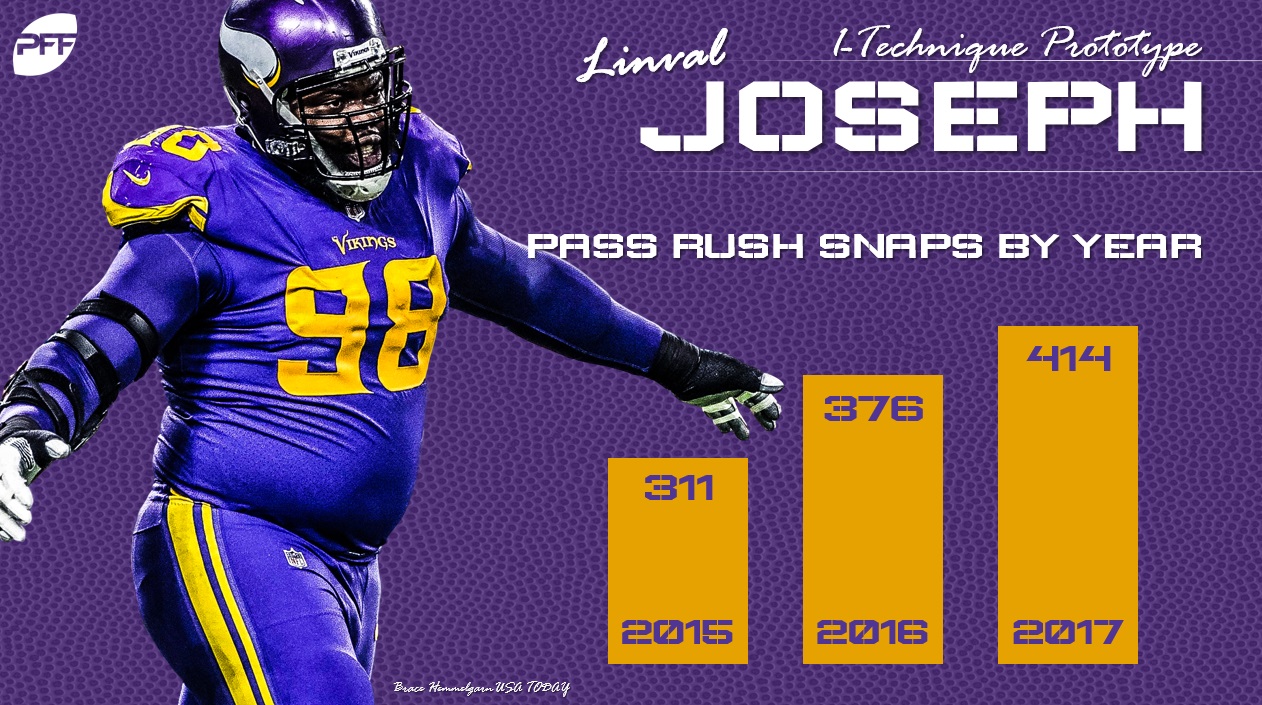 The 1-technique is also referred to the nose tackle, but more often in a four-man front. He is very similar to the 0-technique in that they both play over the center, but the defining difference between the two is that the 1-tech shades one side of the center and is usually responsible for only one gap, not both A-gaps. They are still expected to eat double teams from the center and a guard, which frees up others on the line to take advantage of one on one matchups.

In the past, this spot has been primarily a run-stuffing force, but with the league trending ever-more pass heavy, 1-technique defensive tackles have to be able to bring something when it comes to pass rush or be replaced on third downs. Harrison – our 0-tech prototype – could also easily be the prototype for this alignment, as it’s where he finds himself most often for the Giants. He was at that alignment on 60.1 percent of his snaps in 2017 compared to just 8.0 percent at 0-tech, but listing him as the 0-tech prototype allows us to throw some love in the direction of Minnesota’s Joseph, who does bring more as a pass rusher than Harrison.

Like Harrison, Joseph is a force against the run, with an 89.0 PFF grade in that facet of the game last year, but he also notched 30 total pressures and was on the field for 414 pass-rushing snaps over the season, almost 100 more than Harrison. 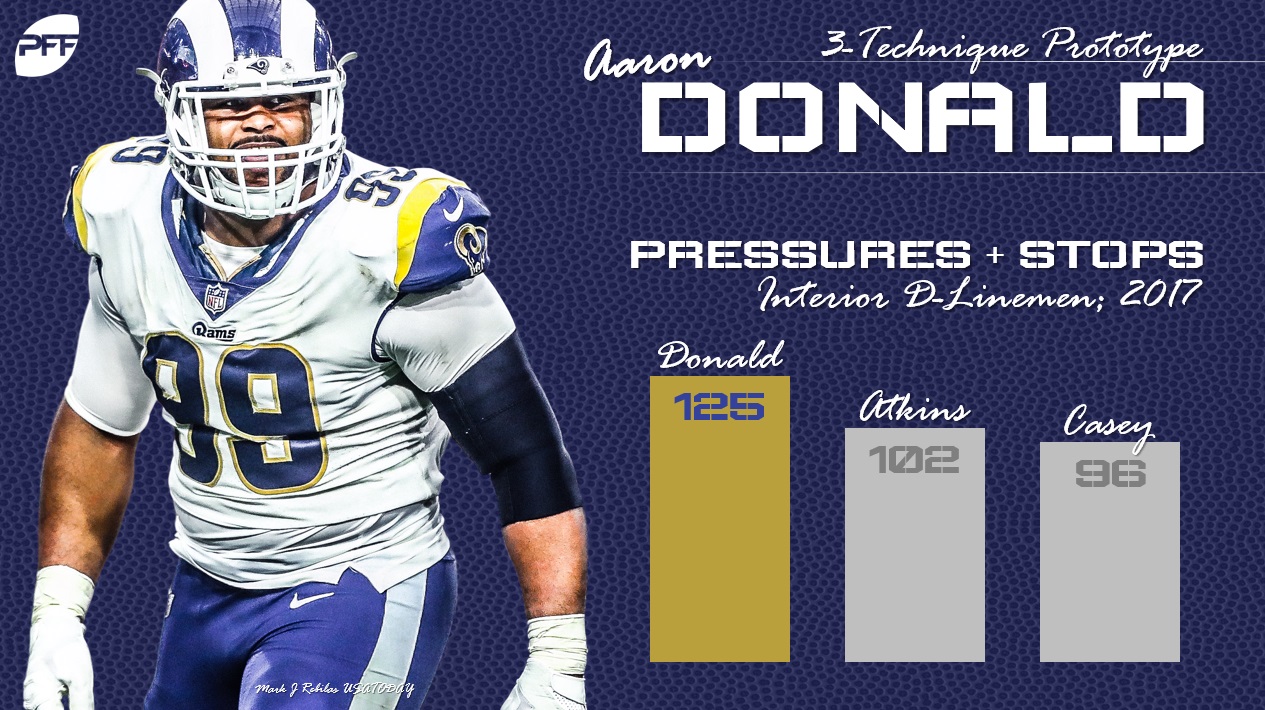 Arguably the most well-known alignment to the common fan is the 3-technique. They are the premier interior pass-rusher in every modern NFL defense, whether that team plays with a three- or four-man line in their base defense. With the league focusing more on the pass, sub-packages have become far more prevalent than base defense, and every sub package features a heavy dose of 3-tech alignment, though those primary pass-rushers inside will play directly in the B-gap as well as the other side of it in a 4i alignment as well. The goal of this movement is to generate a one-on-one situation with an offensive lineman, whether that be the guard or tackle and to attack the B-gap.

The 3-tech is a penetrating lineman who shoots the B-gap more often than anything else and tries to play in the backfield whether against the run or the pass. Teams are more and more employing their most athletic interior players and even edge rushers in this alignment on passing downs regardless of where they typically get deployed on base downs.

Aaron Donald has become the league’s most devastating interior pass-rusher. He led the league in total pressures in 2017 with 91 despite missing two games, dominating even edge rushers in pressure generated. His quickness and ability to shoot upfield has helped to change how much stock teams place on size at the position and he uses that to play the run as well as the pass exceptionally well. 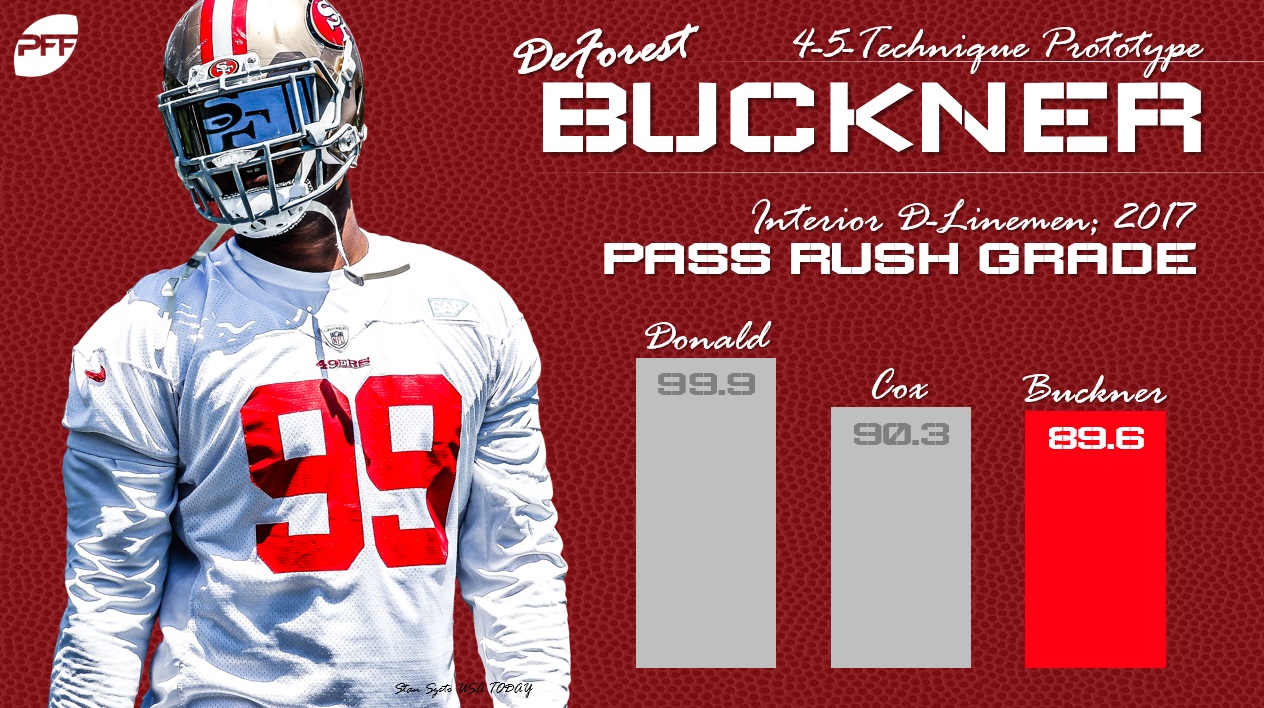 3-4 defensive ends used to be two-gapping complements to the 0-tech nose tackle within defenses, but that style of defense has largely gone by the wayside, and the only thing that differentiates these players from true 3-tech interior pass-rushers is that they have to ply their trade a little more against tackles because of lining up a little further out from center.

J.J. Watt has been the prototype here for several years, but there are so many injury question marks with him it’s time to look elsewhere at least for a season. Watt’s length, speed, and quickness as a pass-rusher as well as his ability to penetrate and play the game in the backfield make him a perfect weapon to combat the additional length offensive tackles typically bring to the table over interior linemen.

Buckner is another player with that additional length, and as if to highlight the crossover between this position and the 3-technique, Buckner played 85.6 percent of his snaps somewhere between the guard and tackle either at 3-technique, in the B-gap or in a 4i alignment. 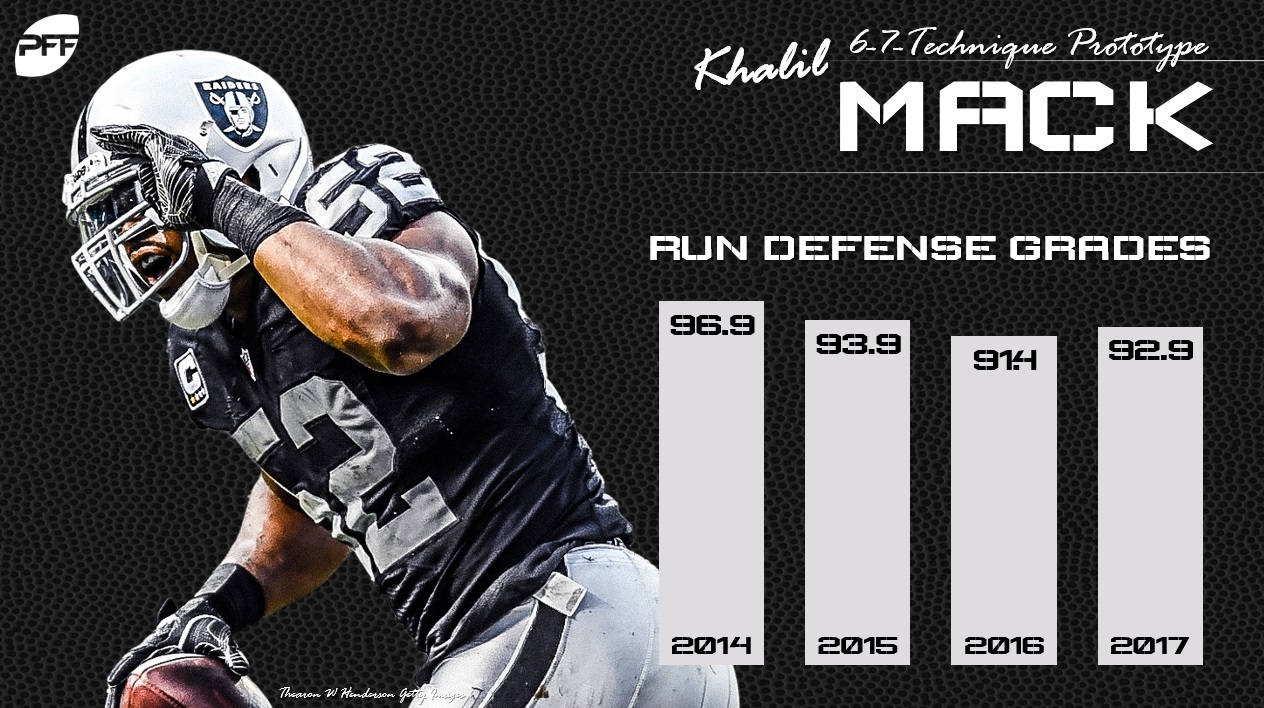 In the past, the best edge rusher a defense had came from the quarterback’s blindside, the right side of the defense to take advantage of the fact the quarterback couldn’t see him coming. He went one on one with the left tackle – the best pass-blocker an offense had – and was typically the primary source of pass-rush a defense had. The other side usually featured a more power-centric end, or “closed end.” This player often had to deal with tight ends and was considered the edge setter in the run game while the other end could pin his ears back more and get after the quarterback.

With offenses becoming more pass-focused, the left side of the defensive line is now home to some of the game’s premier pass-rushers as well, and all edge defenders need to be top quality pass-rushers, but players that can set a hard edge in the run game and play with power can still elevate themselves.

Mack may not be the biggest edge defender in the league, but he is one of the most powerful, and hasn’t had a PFF run-defense grade lower than 91.4 over his NFL career. Mack consistently destroys tight ends in the run game and can collapse the run in on itself from the front side of the play with his strength. As a pass-rusher he more than holds his own, and has notched 313 total pressures over four seasons of NFL play. 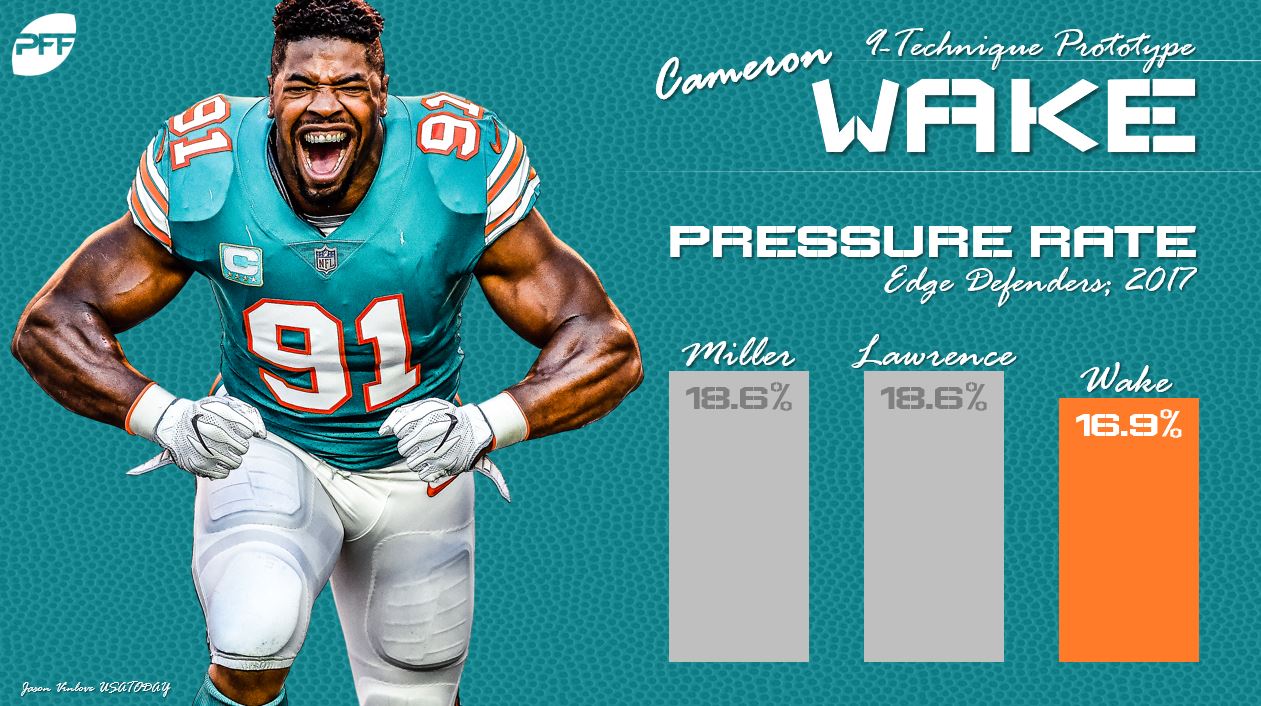 The 9-technique is primarily a pass-rush specialist and it temporarily came to fame with the defenses Jim Schwartz ran that employed a “wide-9” alignment from their defensive ends a lot. Those players lined up far outside the offensive tackle and relied on pure speed to beat their blocker around the corner and get pressure on the quarterback.

These players can use their first step to really challenge the movement skills of the pass-blockers assigned to stop them, and often force them to overcommit to the outside speed rush before making a move back inside or underneath into the space they just opened up. Von Miller is probably the best pure pass-rusher in the league and could easily be the prototype for this alignment (he was last season), but a better pure embodiment of the characteristics may come from Wake. Miami’s pass-rushing phenom just consistently generates pressure due to his first step and ability to bend the edge outside. He racked up 62 pressures last season from under 400 pass-rushing snaps, and throughout his career has consistently notched pressure at a rate of around once every six pass rushing snaps, which is an elite level in any single season. Wake seems ageless and though his role has been dialed back a little in Miami, he remains a consistent source of speed pressure.