The Falcons' rushing attack will be much of the same, even without Devonta Freeman

Injuries have cost the Atlanta Falcons dearly on both sides of the ball, but Devonta Freeman’s season-ending groin injury is among the least impactful.

Falcons coach Dan Quinn said in a press conference Tuesday that Freeman’s lingering groin injury will send him to the Injured Reserve just 67 offensive snaps into his 2018 campaign. The 26-year-old back missed Weeks 2-4 with a knee injury and left Atlanta’s Week 5 affair with the Pittsburgh Steelers with groin and toe injuries. He totaled 91 scrimmage yards and two first downs from 19 total touches (4.79 yards per touch) before being placed on the shelf.

Freeman has performed above expectation for the running back position in the past, but his ability to create yards after contact and force missed tackles has never been among the league’s best – even when looking at his career-best season. In 2016, he averaged a career-high 5.48 yards per touch but ranked outside the top-20 qualifying running backs in forced missed tackles per touch (0.157) and yards after contact per attempt (2.22). 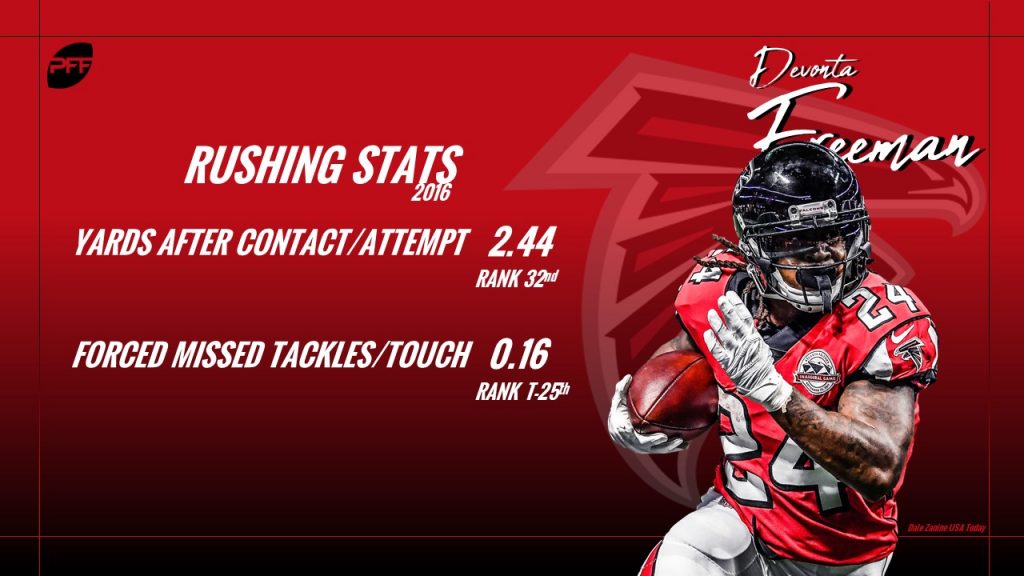 Freeman’s replacements, Tevin Coleman and Ito Smith, can more than fill his shallow shoes as Atlanta marches on without him this season, as the duo has proven equally if not more efficient with the ball in their hands.

Since entering the league in 2015, Coleman has been hyped as the “two” in the Falcons’ one-two punch of Freeman and himself. However, neither of the two’s production has warranted any level of hype, and Coleman has even bested Freeman in some areas over the years. Perhaps they’re a two-three punch because the one hasn’t been there since Michael Turner hung up his cleats in 2012.

From a total efficiency standpoint, Coleman’s 5.2 yards per touch since 2015 barely edges out Freeman’s 5.1 YPT in the same four-year span. Coleman also tops Freeman in yards after contact gained per attempt at 2.68 compared to Freeman’s 2.31. In fact, when contacted at or behind the line of scrimmage, Coleman has averaged 1.1 yards per carry since 2015, while Freeman’s average in said situations sits at 0.8.

In the passing game, Coleman and Freeman have both averaged a respectable 1.50 yards per route run, but neither has proven to be a game-changing pass-catcher, as some have claimed the duo to be even in their best seasons.

Ito Smith, on the other hand, looks the part. The fourth-round Southern Mississippi product has wowed in a limited sample size of just 102 offensive snaps this season, as he ranks ninth in forced missed tackles per touch (0.262) and 14th in yards after contact per attempt (3.16) among backs with 30-plus touches this season.

Smith’s ability to earn yards above expectation dates back to his college days with the Golden Eagles, as he ranked 15th in rushing grade (82.2) among all FBS running backs with 400-plus offensive snaps in 2017. He also ranked T-19th in forced missed tackles per carry (0.20) and 20th in percentage of carries he recorded either a first down or touchdown (29.0%).

Of course, Smith and Coleman will face the same tough sledding Freeman had faced in his limited opportunities, as all Falcons running backs have been hit at or behind the line of scrimmage on 56.4 percent of their carries, good for the fourth-highest percentage in the league.

Guard Andy Levitre, who has been one of the NFL’s best run-blocking guards over the years, tearing his triceps 82 snaps into the season plays a key part in the struggle. Levitre’s replacement, Wes Schweitzer, ranks 64th among 68 qualifiers at his position in terms of run-block grade.

The three-four punch of Smith and Coleman will suffice as Atlanta works to overcome their laundry list of injuries and climb out of the last place in the NFC South. Such an ascent will be hindered by key members of their passing defense (i.e. Deion Jones, Keanu Neal, Ricardo Allen) and Levitre watching from the sideline on the Injured Reserve – not Freeman.