The best NFL player you might not know about

INDIANAPOLIS, IN - OCTOBER 5: Marshal Yanda #73 of the Baltimore Ravens in action against the Indianapolis Colts during the game at Lucas Oil Stadium on October 5, 2014 in Indianapolis, Indiana. The Colts defeated the Ravens 20-13. (Photo by Joe Robbins/Getty Images)

It’s far from a glamorous position, but Marshal Yanda is the best the league has to offer at guard, and has been for a while now. Over the past seven years of his career, Yanda has been in the top 10 at his position every single season, ranking in the top two four times, and at No. 1 in each of the last two seasons.

Yanda had another fine game to open the 2016 season against Buffalo (83.3 overall grade, fourth-highest among guards), and will likely be the man to beat again in 2016.

What’s perhaps most impressive about Yanda is his robotic consistency. He may be a marginally better run blocker than he is pass protector, but he’s consistently good at both every single year. He was even consistently good when the Ravens needed him to play right tackle in the past; had he been left at that position instead of moved inside, we could be talking about one of the best right tackles in the league, too.

In fact, you need to go all the way back to 2009 to find Yanda's last poorly-graded game at right tackle—and he has started 21 games at that position since then. When he played at that spot every game of the 2010 season, he finished the year as PFF’s fifth-ranked offensive tackle, and second only to Kareem McKenzie among right tackles, specifically.

Yanda has never recorded an overall grade under 81.6 for a season. He hasn’t even produced a single bad game for over two seasons' worth of play. The last genuinely poor performance the Ravens' guard had was back in 2013 against the Bengals, who managed to give him all kinds of problems despite missing Geno Atkins due to injury. That’s 42-straight games without a bad day at the office. In today’s NFL, that’s a staggering level of consistency, even if the highs weren’t as high as they in fact are.

So, what makes Marshal Yanda so good?

There’s something common among all great guards, and that’s an ease of movement. Working in the NFL trenches and needing to carry over 300 pounds in mass can often lead to linemen looking a little cumbersome in their movements. Explosive, sure, but at times, it looks like they’re working under a burden when it comes to moving around, and they’re rarely considered agile.

What Yanda and other great interior linemen have is the absence of that clumsy, labored movement. They’re able to execute precise movements and still maintain the strength and balance to complete the block. Take this play against Buffalo in Week 1 as an example:

The Ravens are running a simple outside zone play to the right side of the line. With only six men in the box, the Ravens like their chances of success, but the play requires everybody to make their block for it to work. With an extra lineman to that side lined up as TE, Baltimore has big power on that side of the line, and three-on-three in the numbers game. The TE and RT have pretty routine assignments, but Yanda needs to be able to work his way across to the DT that is lined up right over the tackle. For a guard to work across and seal a 3-technique DT inside is hard enough, but here the DT is lined up even further outside than that (3-technique is outside shade of the guard, effectively in the gap between RG and RT).

The RT puts out an arm to help Yanda get on the block, but by the point he even touches the defender, Yanda has already worked level with him and is well on his way to controlling the block.

From that point, his power and technique take over, and he is able to seal the defender all the way to the inside and spring the running back to the third level of the defense, where he is eventually brought down by the safety.

Yanda's quickness and agility here get him in position to make this play, but his technique is also flawless. He gets his hands inside, locks on, and is able to sink his hips and drive to keep the gap controlled and widen the space for the running back.

In addition to the movement skills that Yanda has, he also possesses the raw power that every line coach in the league wants to see from their players. There’s a reason even zone teams aren’t stocked full of 285-pound linemen like they used to be, and it’s because the raw power that comes from bigger guys is vital to successfully completing blocks. Getting in position is only so much use if you can’t maintain it and are constantly being squeezed towards the hole, cutting off the running back’s path.

When Yanda locks onto a guy, it’s over, even against some of the more powerful players in the league.

Take this example against the Dolphins last season. Again the Ravens are running an outside zone play to the right side of the line, and though Miami is defending it a lot better than Buffalo did in the earlier example—and actually strings it to the sideline and stuffs it for no gain—Yanda is busy burying DT Ndamukong Suh, driving him off the line and putting him to the turf 5 yards downfield and well inside of the flow of the play. 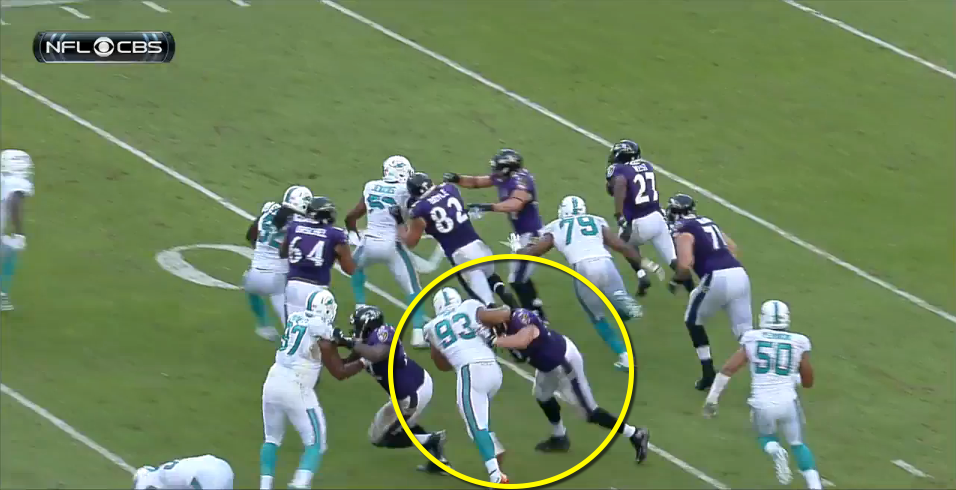 That’s also a good example of the nasty streak everybody loves to see from linemen. Not content with just driving him to the turf, Yanda follows him down to put an exclamation point on the play.

The combination of power, technique, and agility also makes Yanda a perfect fit in either zone- or man-blocking schemes that run a lot of power or gap concepts. Whatever happens in Baltimore from a schematic point of view, Yanda will be well-suited to it, and be able to execute without one aspect of his skill-set holding him back. It’s also why he has been successful both inside and outside at the NFL level.

Most players are missing a piece of that puzzle, and that predetermines where their best position is, or what scheme they are best-suited for, but few players are like Yanda and have no real holes in their game. Marshal Yanda is the best guard in football, and one of the best players in the league, period.