Stats to know for all 32 NFL teams entering Week 15

The Stats To Know series continues with Nathan Jahnke, PFF's director of analytics, finding an interesting piece of information about all 32 teams after 14 weeks of football. This week it’s a special edition, with each observation being about a player who has been nominated for the Walter Payton Man of the Year award. If you would like to make some observations of your own, you can do so with PFF Elite, where you can find several signature statistics for every offensive and defensive position in football, thanks to Premium Stats 2.0.

Lorenzo Alexander has produced pressure on 16.3% of his pass rushes. That is third-best for all edge defenders with at least 150 pass-rushing snaps this year.

Throughout his career, Kenny Stills has 23 touchdowns from deep passes. That is the second-most for all wide receivers since the start of the 2013 season.

Since the start of the 2010 season, only three players – regardless of position – have 20 or more interceptions, 40 or more pass breakups, and 70 or more stops in coverage. One of them is Devin McCourty.

Brandon Carr has accumulated 86 pass breakups over his career, which is third-most for all defensive players since 2008.

This past week, Carlos Dunlap had his 70th consecutive game with at least one pressure. That is the third-longest active streak, and ninth-longest streak by any player in the past 13 seasons. 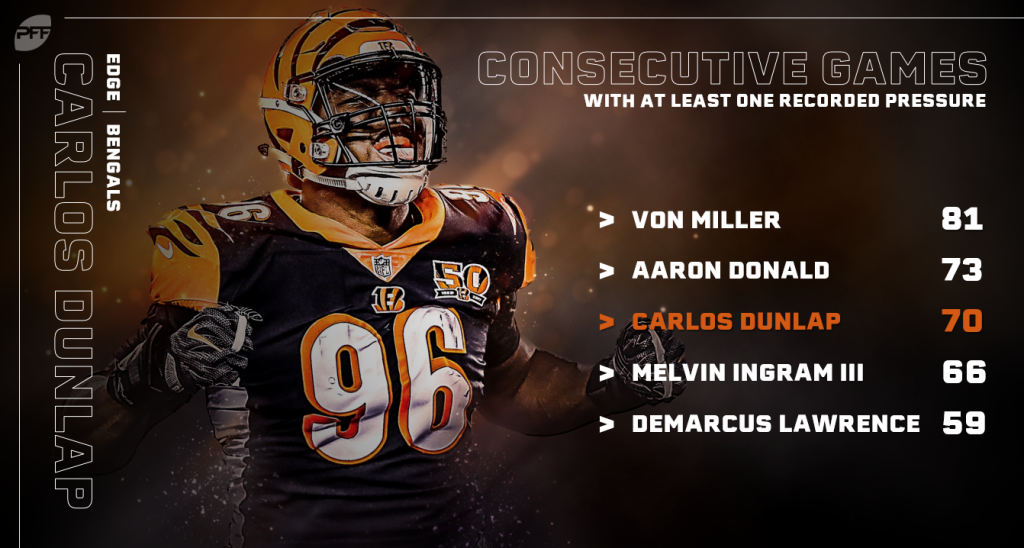 Christian Kirksey has 142 stops since the start of the 2016 season, which is tied for fifth-most among all defensive players in that span.

Cameron Heyward has produced 41 pressures from the defense's right side this season, which is the second-most for all interior defensive linemen when lined up on that side.

Over the last four seasons, Whitney Mercilus has 19 tackles for loss or no gain on second and third-down run plays, which is the second-most for edge defenders in that time despite missing significant time last season.

Edge defender Jabaal Sheard has produced two or more pressures in 28 consecutive games. That is the longest active streak for all defensive players.

Quarterback Blake Bortles has 19 carries of 20 or more yards in his career. That is the most for any quarterback since the start of the 2014 season.

Jurrell Casey was drafted in 2011 and has racked up 228 run stops in his career. That is the second-most for all interior defensive linemen in that span. 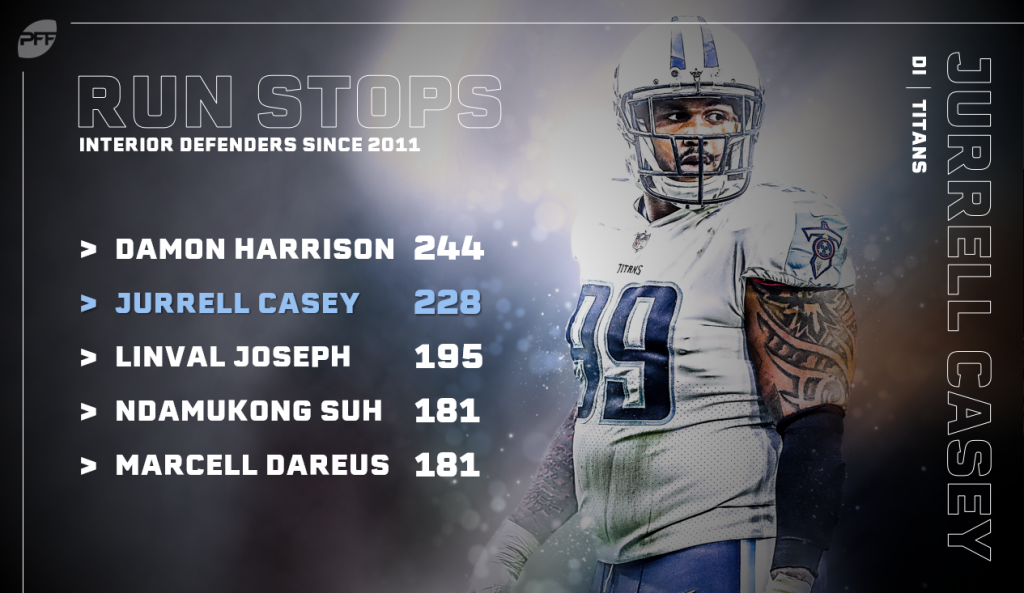 This past week, Von Miller had seven total quarterback pressures. It was the 33rd regular season game of his career with seven or more pressures, and that is the most for all defensive players since 2011.

Over the last five years, return men have averaged just 6.3 yards per return when fielding Dustin Colquitt’s punts. That is the lowest for any punter with at least 200 punts in that time.

Corey Liuget has a 13.1% run-stop percentage this season, which is fourth-best for all interior defensive linemen.

Over the course of his career, Marshawn Lynch has forced 522 missed tackles in the regular season. That is the most for any player, and only four players have forced more than half the amount Lynch has since 2007.

Since Week 9, Dak Prescott has an adjusted completion percentage of 76.6% under pressure, which is the second-highest rate among quarterbacks in that span.

Over the last four seasons, safety Michael Thomas has 49 combined tackles and assists on special teams plays, which is the most for all players over that period.

This past week, Chris Long registered his 550th career regular season pressure. That is the fourth-most for all defensive players since 2008. 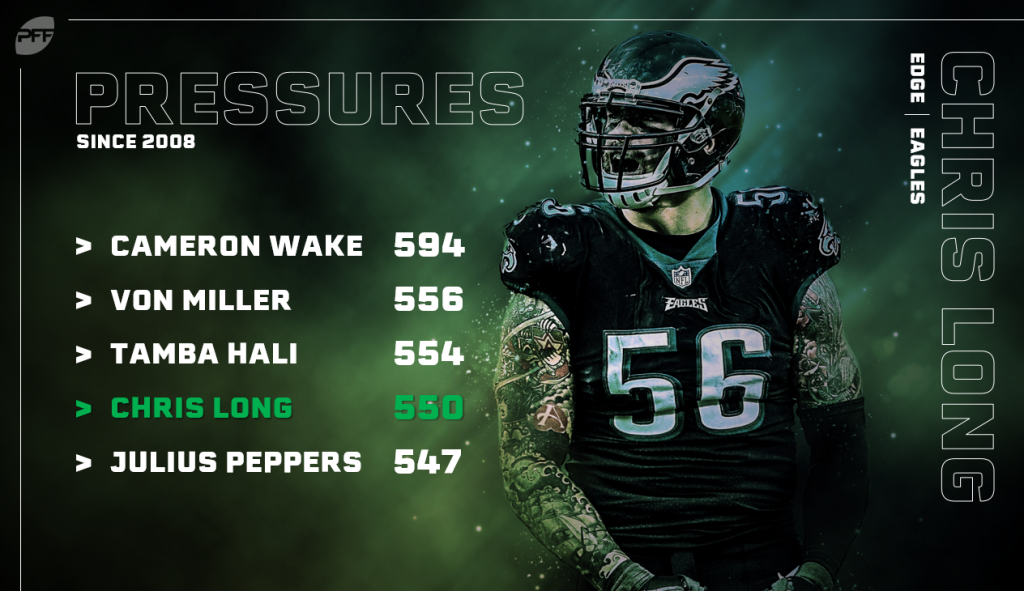 Vernon Davis is the only tight end to have forced over 100 missed tackles since 2006. He’s currently at 106, which is 24 more than any other tight end.

When Trey Burton lines up in a two-point stance, he has nine touchdowns over the last two years. That is tied for fourth-most among all tight ends.

Since 2011, when Matthew Stafford has held on to the ball for three seconds or more, he’s averaged 17.3 yards per completion. That is the highest rate for any quarterback in that timeframe.

Kenny Clark is the only interior defensive linemen this season with 25 or more run stops and 40 or more pressures.

Grady Jarrett has a 20.4% win rate on his third-down pass rushes this season, which is fourth-best among interior defenders.

Julius Peppers has 88 games with four or more pressures since 2006, which is tied for the most for all defensive players in that span.

Mark Ingram II has been tackled for a loss on just 7.4% of his carries during his career. That is the lowest rate for all backs who have 800 or more carries since 2011. 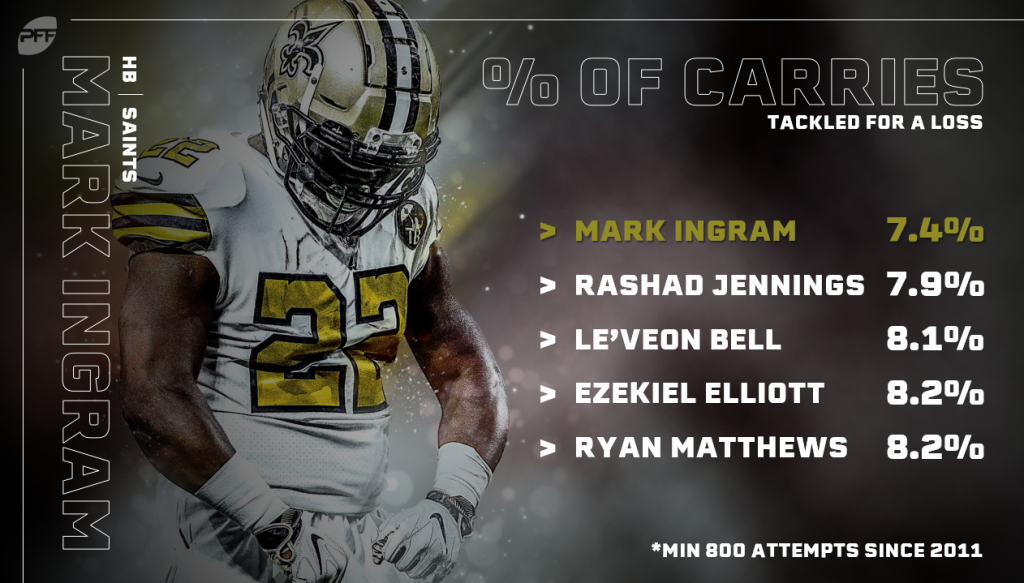 Gerald McCoy was drafted in 2010 and has 388 career pressures. That is the third-most pressures among all interior defensive linemen since the start of the 2010 season.

Antoine Bethea was drafted in 2006 and has 85 career stops in coverage. That is fourth-most among all safeties in that time.

Since the start of the 2006 season, Andrew Whitworth has 51 games at left tackle with 20 or more pass blocks and no pressures allowed. That is 15 more than any other left tackle in that time.

Robbie Gould has made 16 of 19 kicks over 50 yards over the last five seasons. That 84% success rate is the best for kickers with at least 10 long attempts in that time.

During his career, K.J. Wright has had 39 third-down stops on pass plays, which is fifth-most for linebackers since 2011.