CLEVELAND, OH - SEPTEMBER 10: Wide receiver Antonio Brown #84 of the Pittsburgh Steelers reacts after running for a first down during the second half against the Cleveland Browns at FirstEnergy Stadium on September 10, 2017 in Cleveland, Ohio. The Steelers defeated the Browns 21-18. (Photo by Jason Miller/Getty Images)

The scoring opened with a blocked punt recovered for a touchdown by EDGE Anthony Chickillo. QB DeShone Kizer would respond with a touchdown run, but the Steelers would pull ahead just before the half with a QB Ben Roethlisberger touchdown pass to TE Jesse James.

A Zane Gonzalez field goal would open the second half scoring, followed by a second James touchdown catch. Late in the fourth quarter, the Browns could get a WR Corey Coleman touchdown catch from QB DeShone Kizer, however it was not enough to overcome the Steelers, who won 21-18. With that, we give you our PFF exclusive takeaways from the contest for each team.

Pittsburgh quick-passing helped limit pressure on QB Ben Roethlisberger, as Gilbert was one of four Steelers offensive linemen to not yield a pressure. Gilbert also posted an 84.1 run-blocking grade, the highest on the team for the day.

It was business as usual for Brown, who used his quickness to make defenders miss on underneath catches, and his elite speed and ball skills to haul in multiple balls downfield on scramble plays. He snared all 11 balls thrown his way, with 95 of his 182 yards coming after the catch.

Watt made a significant impact in his first career NFL regular season game. He tied for the team lead with four defensive stops, had four total pressures, and made a nice interception while dropping into coverage. Still, it could have been better, as he missed three tackles, and one of his two sacks came as cleanup.

Haden's first game in a new uniform coincidentally came against his former team. While he broke up a pass early on, the rest of his outing was average at best. He didn't give up any major plays, but did allow six catches for 80 yards and a 106.3 passer rating into his coverage.

Kizer's NFL debut could have gone better, but he did show some nice plays at times. He was under pressure fairly often, but some of that was also self-induced by either drifting, or getting spooked and leaving the pocket before it was necessary. Interestingly, his adjusted completion percentage when kept clean compared to when under pressure was exactly the same–75 percent.

Coleman was Kizer's favorite target on the day, as he snatched all five of his targets for 53 yards and a score. His fourth down touchdown reception kept hope alive for the Browns late in the fourth quarter, as he used a subtle pushoff to gain just enough separation to make the grab. Kizer had a passer rating of 150.4 when targeting Coleman.

While teammate Jamar Taylor had his hands full with Brown (33.3 coverage grade), Boddy-Calhoun enjoyed a strong afternoon, much of it spent in the slot. On three throws into his coverage he surrendered just one catch for six yards, also breaking up a pass. He notched three total defensive stops and no missed tackles on the day.

We don't normally highlight players with low snap counts, but the rookie Ogunjobi made quite an impression on just 17 total snaps. He in particular gave Maurkice Pouncey fits on run blocks, as he was able to beat him with both quickness and power for a defensive stop and two solo tackles. He earned a a run defense grade of 89.8, and may have also earned himself more playing time going forward. 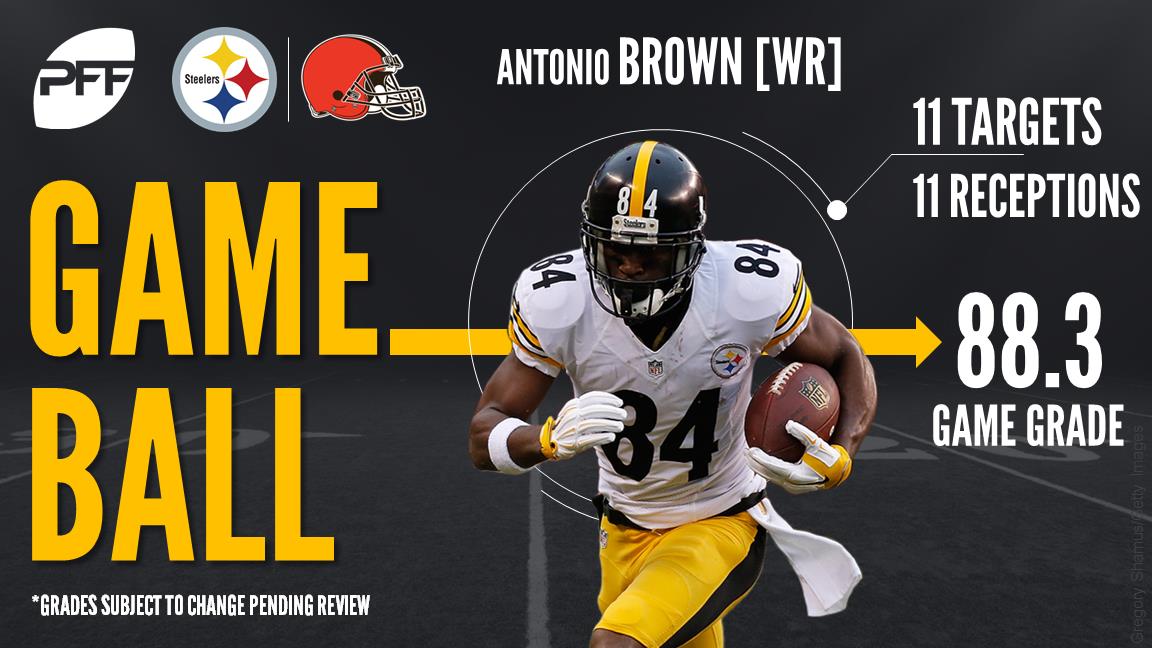