The Dallas Cowboys defeated the Seattle Seahawks, 24-22, in the Wild Card round of the playoffs. 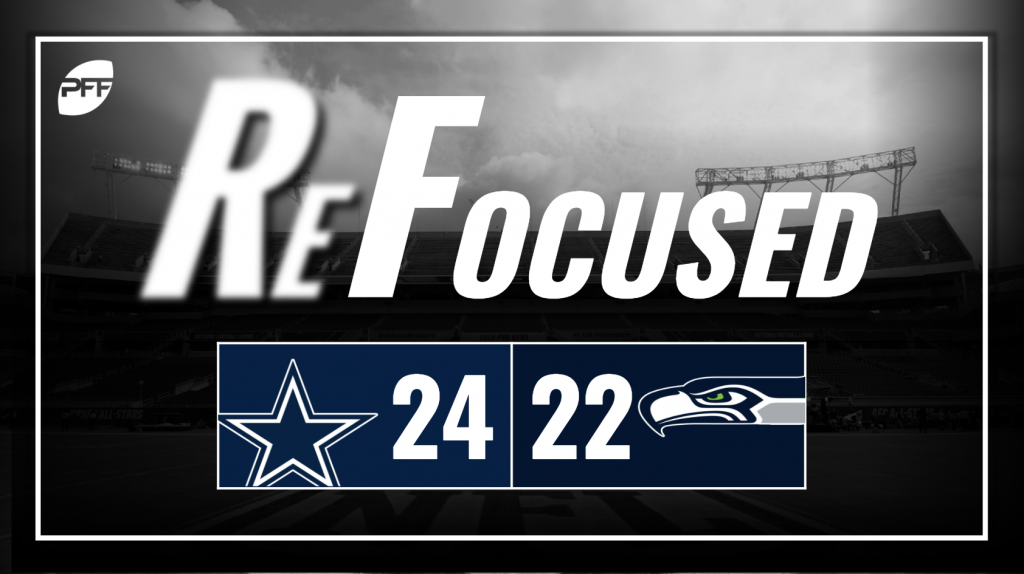 It was a slower start for the Dallas offense, with just 10 points through three quarters. They finished off drives better in the fourth quarter, though, scoring 14 points and running over five minutes off the clock to give Seattle the ball back with two minutes left with a 10-point lead, which turned out to be enough despite a fourth-quarter Dak Prescott interception.

Some questioned the Cowboys for resting Zeke Elliott in the final week of the preseason, but it's tough to argue with the performance he had after a week off. He rattled off a couple big runs off the right end en route to 137 yards on the ground and added another 32 as a receiver on a whopping 30 touches, not including another three runs that were nullified due to penalties.

The Cowboys' front seven bottled up the Seahawks' rushing attack, with Leighton Vander Esch and Maliek Collins in particular putting together strong efforts. Seattle managed just 59 yards rushing on 21 carries by running backs (2.8 yards per carry), and 28 of those yards came on one attempt.

While a couple of busted coverages leading to a few big plays threatened nearly threatened to undo it, the Cowboys' defense was very good in coverage on a snap-to-snap basis. Wilson was consistently forced to throw the ball underneath due to tight coverage downfield, where Vander Esch & Co. were waiting to make tackles for minimal gains.

It was boom or bust for Russell Wilson and the Seattle passing game. Wilson was excellent throwing the deep ball, connecting with Tyler Lockett for a trio of big plays on the night, including one on the final drive to breath life into a comeback attempt. But the Seahawks were unable to complement those big plays with any consistency underneath, leading to a number of stalled drives.

On the whole, Seattle's offensive line held up well in pass protection, handling the Cowboys' defensive line and their bevy of stunts admirably. The only sack surrendered on the night came on a miscommunication with the protection that gave Collins a free run at Wilson.

Bobby Wagner was the best linebacker in football this season and entered the game having missed just a single tackle in the entire regular season. But a draw play on third and 14 with the game on the line, Wagner and Bradley McDougald both missed tackles on Prescott, allowing him to pick up a first down with the ball inside the one. That gave Dallas the opportunity to go up 10 instead of either forcing a field goal to go up six or a more difficult fourth down attempt.

Shaquill Griffin had a nice pass breakup on a pass that Prescott forced into coverage, but he didn't play all that well otherwise. He gave up a touchdown, missed two tackles after the catch and missed a third tackle against Elliott on a run that would have likely been for a loss, but instead turned into a 17-yard first down with less than four minutes left in the game.

Dallas controlled the clock and scored 14 points in the final quarter to go up two scores with two minutes left, leaving too little of time for a Seattle comeback.

The big plays were there, but the consistency on offense was not, leading to far too many three-and-outs and allowing the Cowboys to control the game.