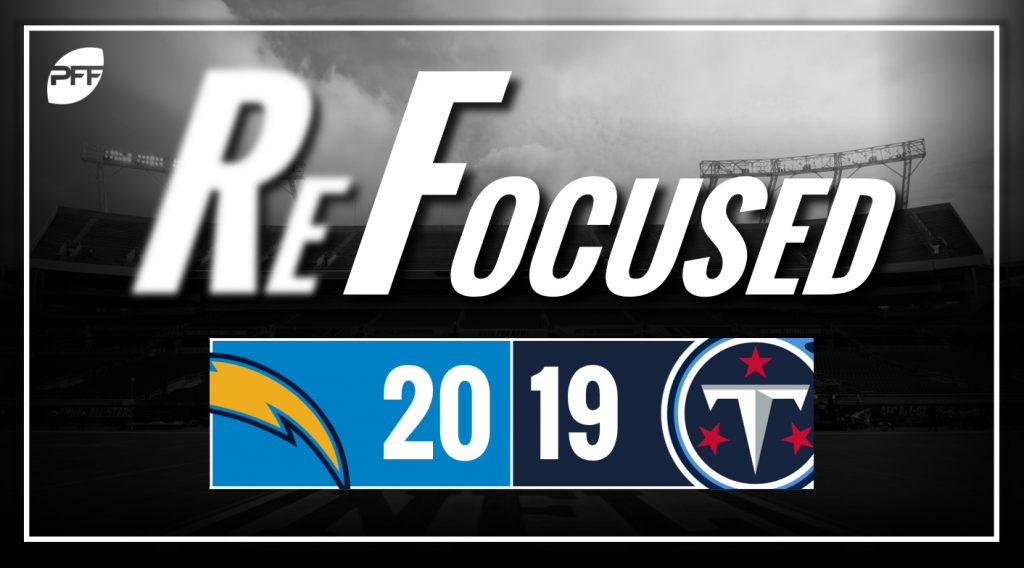 Melvin Ingram and Darius Philon carried the load for the Chargers' pass-rush in the continued absence of Joey Bosa, both of them registering a sack and multiple pressures on the day. Ingram hasn't hit it off consistently as the Chargers' top edge rusher this season, but he made his presence felt with a versatile performance against Tennessee, getting pressure inside and off the edge as well as getting his hands up on rushes when he didn't get home for two batted passes, one of them leading to a crucial red-zone interception.

Tackling is a growing problem for the Chargers' defense, and they racked up double-digit missed tackles for the second consecutive week against the Titans. They hadn't missed 10 tackles in four straight games until last week, but even the pillars of the defense this week were falling off tackles with the likes of Jatavis Brown, Denzel Perryman and Derwin James falling off multiple tackles over the course of the game.

It was a big game exploiting busts down the field for Philip Rivers, for more than 50% of his passing yards came on three of his 26 pass attempts. He did not miss when given the opportunity to make game-changing plays.

The Chargers' guards struggled again this week, and while the Chargers' continue to win, you have to question whether they are spurning a potential upgrade at right or left guard with Forrest Lamp still waiting on the bench. Both Dan Feeney and Michael Schofield gave up multiple pressures and struggled to create running room up the middle for a Melvin Gordon-less running attack. Lamp had seven snaps this week; if the Bolts are to get better play at guard in coming weeks, you would think Lamp to play more often.

The Titans' ground game came alive in the second half with their interior offensive line getting the better of the Chargers' defensive line as the game went on. That included left guard Corey Levin starting for the injured Quinton Spain, but he did struggle repeatedly in pass protection. That included the game's decisive play when he was thrown aside by Corey Liuget, pressuring Marcus Mariota and forcing him to try to fit a pass into a well-covered Taywan Taylor at the back of the end zone.

A lack of explosion and a general conservative air continues to be a problem with the Titans' passing game. Mariota came up with some key plays and conversions over the course of the game but only attempted one pass 20-plus yards down the field and simply couldn't come up with big plays when the Chargers held back and didn't blitz. The Titans are still striving for an identity with their passing game, and they didn't find it in London.

Two coverage busts were the story of the game for the Titans' defense. They were solid against the run and tackled well, but when you give up easy, quick, deep strikes like the Titans did, it's tough to overcome that. Those busts around Kendrick Lewis and Logan Ryan kept the Titans chasing throughout the game.

Jayon Brown had one of his better and more productive performances of the season on his trip across the pond. Brown made multiple stops, logged his third sack of the season and kept missed tackles to a minimum after missing six over the last 3 weeks. All that adds up pretty quickly to a strong display.

The Chargers' big plays on offense kept the Titans chasing throughout the game. The time of possession was lopsided in the Titans' favor, but the Chargers were brutally efficient with the possessions they had.

Tennessee's defense fell victim to the big play on defense early in the game, digging themselves into a whole Mariota & Co. simply couldn't climb out of.